Once Ida Mae Martinez Selenkow asked, “How many wrestler/nurse/yodelers do you know?” There was only one. And though her death today at age 78 completes her journey, it hardly begins to tell the remarkable tale of a fascinating woman who lived life to the fullest, experiencing drastic ups and downs along the way. 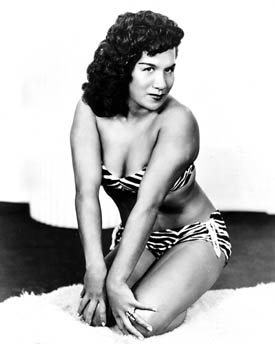 Born in New London, Connecticut, on September 9, 1931, the name on her birth certificate was St. Laurent, from her mother’s first husband. She said her mother was a prostitute. “I’ve never known who my father was,” she told this writer in 2006, sharing her belief that he was of Spanish descent, before adding, “Anyway, I’m Jewish now!”

When she was 13, she left home to live with a cousin, attending Norwich Free Academy for her schooling, but excelling in sports — basketball and gymnastics especially. The 5-foot-2 spitfire fought the boys often at school, which continued after she married. She was also a country/western singer and yodeler at county fairs and charity minstrel shows.

“I got married at 17 as a way out. We fought constantly, physically,” she said. “I don’t think anything bad about it. It was a stepping stone for me. That caused me to go to Houston, which I thought was pretty good. When somebody said, ‘How’d you like to wrestle?’ I said sure. I hadn’t a clue what it was all about.”

It was local wrestler Larry King (Morris Collins) who suggested Selenkow try pro wrestling. She checked out the show — Johnny Mae Young versus Gloria Barattini — and sought out women’s wrestling honcho Billy Wolfe after the show.

Though small, Selenkow impressed Wolfe with her acrobatics in the hotel room. Wolfe invited her to his Columbus, Ohio, wrestling school for women. She sold a guitar to get the bus money for the Houston-Columbus trip, but fell short. Another aspiring woman wrestler, Ruth Boatcallie, lent her the $10 to complete the trip. “I called her and exchanged phone numbers. I said, ‘I don’t have enough money to go to Ohio, to Columbus. I’m short $10.’ ‘I’ll lend you the ten.’ …. My, what a turning point that was in my life. If she hadn’t have given me that $10, I probably would have still been in Houston somewhere.”

A number of women helped train Selenkow, though she usually gave Adelle Antone the most credit.

Given her exotic Hispanic look, she was named Ida Mae Martinez for her debut bout in August 1951 at an Ohio spot show. “I was scared stiff. I had worked out and worked out. She was a trapeze artist,” she said. “I was wearing one of Mildred Burke’s robes, and her boots, because I didn’t have anything. Billy said, ‘Well, you can borrow these. It’s that red, white and blue gown.’ That’s where I got the idea for the red, white and blue shoes. I think I’m the only one that wore red, white and blue boots with my name on it.” Her typical outfit for wrestling was a full bathing suits with reinforced rubber around the neck and around the thighs.

Martinez’s style was all action, with the flying dropkick as her finishing move. “I threw a lot of dropkicks like Rocca,” she said. “Cora Combs said she was hit in the chest by my feet harder than anybody’s ever hit her in the chest.”

By 1952, Martinez was a champion in Mexico. Over her decade-long career, she fought all the top women’s stars, counting Mary Jane Mull, Ella Waldek, Mildred Burke and Nell Stewart as her toughest opponents.

“She didn’t stay very long, she was so small but full of vim, vigor and vitality. She was like greased lightning,” recalled Waldek.

She admitted to promoter Jack Pfefer in a June 8, 1959 letter than wrestling had really gotten into her blood. “I have been working around Baltimore for the past month with May Young, Barritini & Barbara Baker. It sure seems good to get back to work again. I got that old feeling. You always told me it was in my blood and you were right. I didn’t realize how much I really missed the business.”

A month later, on July 10, 1959, she wrote to Pfefer again. “There’s really no money in the business anymore. I’ve always had my heart in my work and I do try hard and take lots of bumps and sometimes I think it’s all in vain. People don’t seem to appreciate it as much anymore.”

Ida Mae Martinez’s in-ring career came to an abrupt halt in 1960, when she married a Baltimore businessman. They would have two daughters, I. Ryan and Traci, and Ida Mae stayed home to raise them.

As her children grew up, she turned her attention back to schooling, completing her Maryland GED (High School Diploma) in 1971. In 1975, she received her Associates Degree in Nursing from Catonsville Community College and, five years later, earned her Baccalaureate Degree in Nursing. As a nurse, she worked in various fields, including surgery, ICU, and Psychiatric Nursing. In 1990, she graduated with a Masters Degree in Community Health Nursing from the University of Maryland. Selenkow was one of the first Baltimore area nurses to care for AIDS patients, and would develop a reputation as a good speaker, educator and writer on nursing.

Wrestling came back into her life in 1985, when she learned about the Cauliflower Alley Club, and headed out to a reunion in Hollywood. Martinez was a regular at CAC events, and would later become a board member, helping with women’s wrestling honorees and the condolence committee.

Finding out what happened to some of her old friends and colleagues became a bit of a passion for Martinez, who once took out an ad in the Columbus newspaper looking for ex-wrestlers and their families.

She shared the story of her hunt for Nell Stewart.

“When Nell Stewart was hiding out from everybody, I found her in the mountains. I flew into Birmingham and rented a car, asking around phone companies, gas, electric. I went to a liquor store and I said, ‘Would you happen to know Nell Stewart?’ This girl popped up and said, ‘That’s my cousin!'” she remembered. “Nell had a real drinking problem, ultimately. And I felt so terrible because she was such a glamorous, beautiful woman. Everybody was stunned by her appearance. She was gorgeous. They felt she was a model or something.” 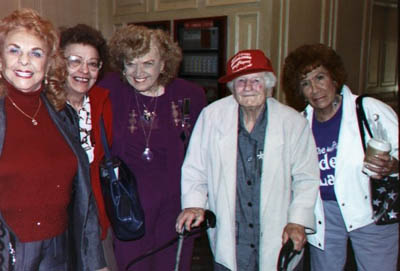 In the 2004 documentary, Lipstick & Dynamite, Martinez was one of the featured woman wrestlers. Though she would later confide that the movie had been taken over by The Fabulous Moolah (Lillian Ellison) and Mae Young, Martinez was still pleased that the film was made. “They really need to see the real us, meaning us, the women. We’ve been stereotyped for a long time, as masculine, they think we’re butches, this and that. That’s not true. I think many of us have a lot of class, and we show it.”

Martinez regularly attended the Gulf Coast Wrestlers Reunions in Mobile, Alabama, and was also a believer in the Professional Wrestling Hall of Fame in upstate New York, attending banquets on induction weekend, as well as dinners in New Jersey and Ontario on her own dime. She was presented with the initial PWHF Senator Hugh Farley Award in 2006, given to an individual who has distinguished himself or herself both inside and outside of the wrestling ring with their contributions to society. She was also presented with a Governor’s Citation by the State of Maryland for her work representing her community and state. 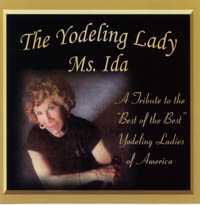 The spring of 1997 saw Martinez return to her early love of yodeling, which would eventually lead to her 2004 CD, The Yodeling Lady Ms. Ida, a tribute to the best yodeling ladies of America. The yodeling would get her appearances on The Rosie O’Donnell Show, but they weren’t the shows she would brag about.

One time, she went to a Hadassah meeting. “I thought these old ladies are going to hate me because many of them have not heard yodeling. … When I finished the song, they all rushed up to the podium, ‘You’ve got to do your life story!’ That was very positive to me.”

Martinez was never shy about talking about her two abusive marriages. “My goal is to stop women from being beaten up. Not one woman deserves it, I don’t care what she’s done,” she said. She was a regular at nursing homes, senior centers, animal rescue shelters, and homes for abused children; “I was an abused kid, so it hits me right in the heart.”

Upon reflection, her life was a remarkable tale, shaped by wrestling. “It wasn’t a bad life on the road. It was a great experience to me, a good learning experience. That’s what I needed,” she said of her time in the grunt and groan world.

She would often brag about her two daughters, four grandchildren and two great grandchildren. “I’m really content with my life. I’m still performing and carrying on,” she said in 2006.

— with files from Scott Teal and Jamie Kreiser

Greg Oliver has many fond memories of Ida Mae, and a yodeling CD to prove it. The best was probably sitting around a Toronto hotel the night before the second Titans in Toronto dinner with Ida Mae and promoter Al Campbell spinning tales. Greg can be emailed at [email protected].