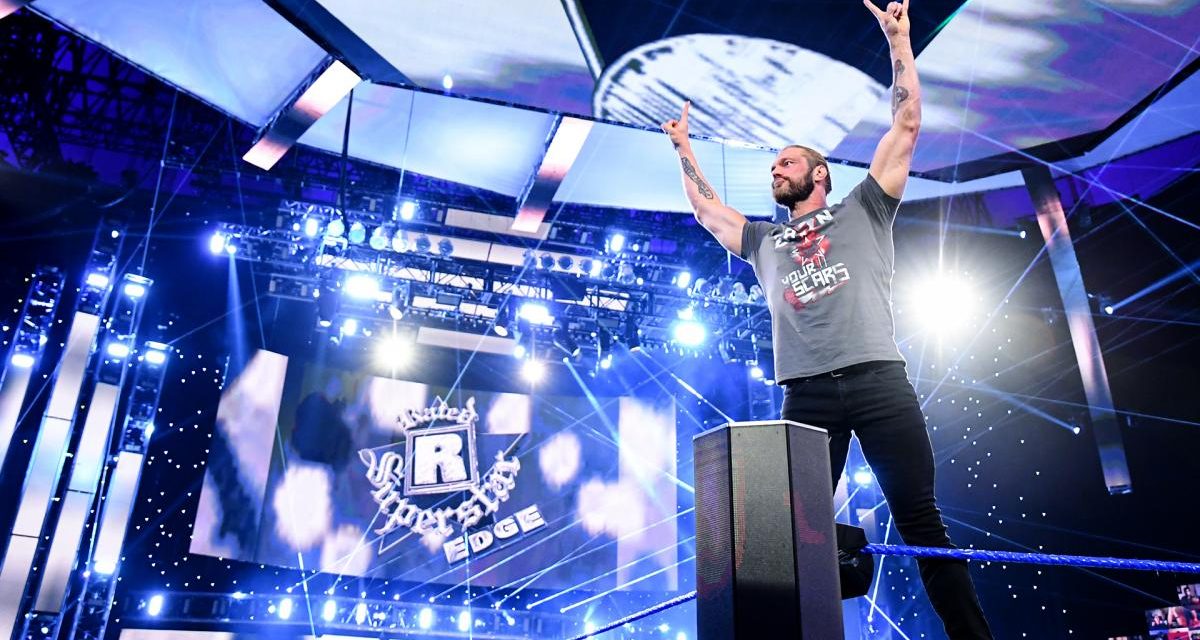 Featuring the return of a champion, this March 12th episode of SmackDown features an 8-man-tag match.

We commence the show with The Rated R Superstar, Edge. The Royal Rumble winner wastes no time in verbally attacking Roman Reigns and Daniel Bryan, and reminding him just exactly who he is. He says he loves wrestling just as much as Bryan does, and the Leader of the YES! Movement chooses that moment to interrupt him.

Bryan grabs a microphone and makes sure to state that he has the highest respect for Edge, but he’s giving it everything he’s got to be in the main event of WrestleMania, because this may be his last one. He reminds Edge that his WrestleMania spot is safe no matter if Bryan wins or not. Edge says he doesn’t like how Bryan got his WrestleMania chance. He says that Bryan is better than that, but not better than him.

Before the match even starts, Alpha Academy and Dolph Ziggler and Robert Roode attack their opponents. I’m surprised that Otis is comfortable working with Dolph considering their feud a while ago. Turning heel does funny things to a person, I suppose. The match starts during commercial, and when we come back, Dawkins is taking it to Roode with a bulldog and a dropkick. He tags in Ford, who delivers a dropkick of his own before tagging in Dominik for an assisted leg drop. Roode hits Dominik with a knee and tags in Chad, but Dominik delivers a hurricanrana to the leader of the Alpha Academy.

Chad tags in Otis, who crushes Dominik with an ax handle. He tags Chad back in, and Chad delivers a gorgeous butterfly suplex for 2 before tagging in Roode, who locks in a submission on the left leg of Dominik. Roode looks for a suplex, but Dominik counters with a brutal Tornado DDT. Roode tags in Ziggler and Dominik tags in Dawkins, who runs over Ziggler with a series of clotheslines, a back elbow, and an exploder suplex. He goes for a spinning splash, but Ziggler hits him with a back elbow. Dawkins comes right back with the Annointment, and he tags in Ford for a Frog Splash.

However, Chad distracts the ref, allowing Roode to shove Ford off the top rope as we go to commercial. When we come back, Ziggler has a deep headlock on Ford, but the former tag champ fights out of it. Ziggler immediately stops Ford’s comeback with a dropkick. He locks in a sleeper hold, but Ford is able to make a tag with Ziggler on his back. However, Roode distracts the ref, and the tag isn’t legal.

Ziggler beats down Ford and tags in Roode, who tags in Otis to hold Ford open for some punches from the big man. Otis goes for a splash, but Ford moves out of the way. Otis tags in Chad, who looks for a German suplex, but Ford lands on his feet and tags in Rey, who goes crazy on Chad with a headscissors and a Satellite DDT.

The pin is broken up by Otis, and Dominik looks for a crossbody on the big man, but Otis catches him. Rey comes off the top with a senton onto Otis, and he looks for the 619 on Chad, but Roode tags himself in and delivers a spinebuster. Ford breaks up the pin, Ziggler superkicks Ford, Dawkins delivers the Silencer to Ziggler, Roode shoves Dawkins out of the ring, and Rey and Dominik Mysterio deliver a double 619 to Roode before tagging in Ford, who delivers a Frog Splash for the win. 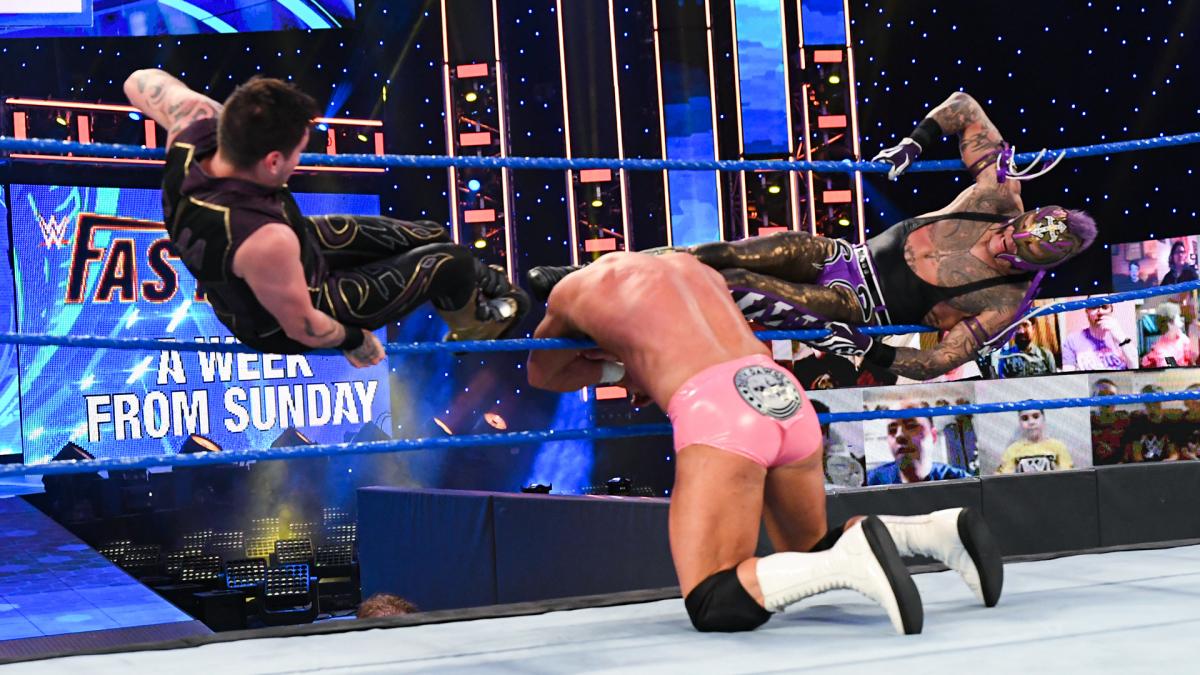 I really enjoyed this match, it was hard hitting and well paced. I’m generally not a fan of 8 man tag matches, but this one is an exception.

Kayla Braxton interviews Seth Rollins, who says that he’s done with Cesaro, and he’s the biggest waste of potential in the WWE.

Nia Jax and Shayna Baszler take Reginald on a shopping trip, because this is absolutely the best thing the women’s champs tag champs could be doing right now. They flirt or whatever, Shayna thinks it’s stupid, I felt genuinely uncomfortable, not gonna waste any more time with this one. Get it together WWE creative, give the tag titles to someone else if you’re so set on making Nia and Shayna a joke. Shayna doesn’t deserve this at all.

With Seth Rollins sitting on a chair on the ramp, Cesaro takes it to Murphy quickly, but the former Disciple attacks with some spears. The Swiss Cyborg strikes with some uppercuts. Murphy delivers a kick, but Cesaro delivers his own much stronger kick. Murphy goes to ringside, but when Cesaro follows him, Murphy strikes with an incredible knee strike. He goes to the top rope, but Cesaro meets him there to deliver a thunderous superplex. He follows it up with a series of uppercuts in the corner, before delivering the Giant Swing.

Before Cesaro can lock in the Sharpshooter, Rollins enters the ring and attacks him. He beats him down and delivers two Stomps to the Swiss Cyborg. Rollins grabs a chair and looks to deliver the Stomp with the chair around Cesaro’s neck, but the refs stop him before he gets the chance. 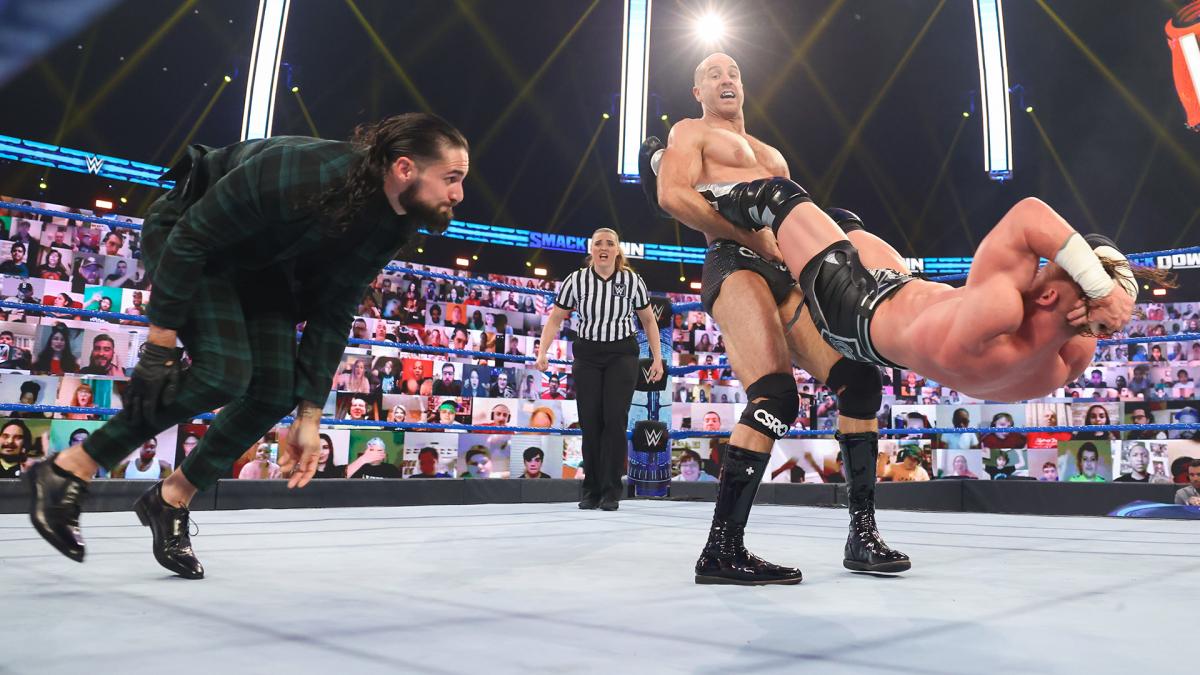 Backstage, Sami Zayn approaches Kevin Owens, asking him to be a part of his documentary. Owens says he has the K.O. Show to work on, but he’ll think about it.

Edge catches up with Jey Uso. He tells him that one of Jey’s matches reminded him of his love for wrestling. He says that Jey shouldn’t be playing lap dog to the Big Dog. Jey says he shouldn’t talk like he knows him.

Kevin Owens hosts the K.O. Show, with special guests Bianca Belair and SmackDown Women’s Champion Sasha Banks. Owens asks them if they have any tension between them, and they immediately start arguing, proving his point very well. They do the regular pre-WrestleMania match posturing, before they’re interrupted by Nia and Shayna, accompanied by Reginald. Tamina and Natalya enter as well, as they have a match with Banks and Belair.

With Nia and Shayna on commentary, Tamina starts off against Banks, and Banks gets tossed around easily. Tamina tags in Natalya, and Banks strikes with a slap and an arm drag that sends Natalya to the outside. Banks brings Natalya back in the ring and taunts Nia, but Natalya attacks with a clothesline before tagging in Tamina, who stomps Banks down. She tags Natalya back in, who takes her turn stopping, and adds a suplex onto the offense, getting a two count. 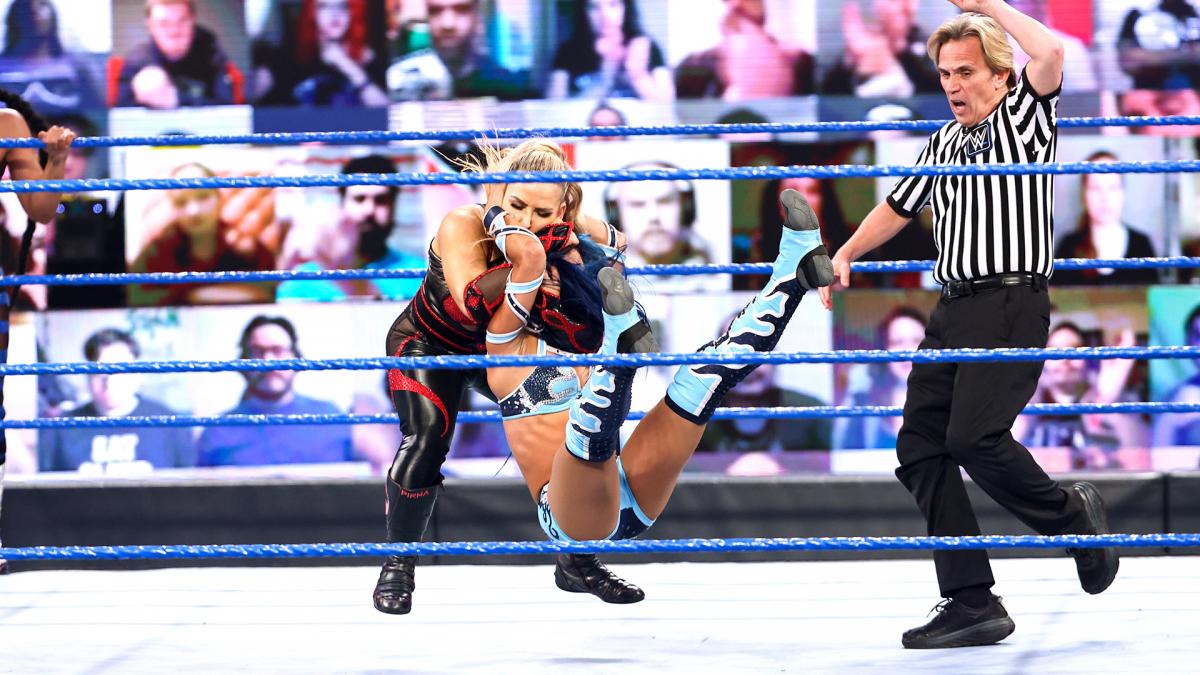 Sasha Banks with a Stunner to Natalya. Photo: WWE

Banks strikes with a Stunner before tagging in Belair, who knocks Natalya around with a couple dropkicks and a spinebuster. Reggie gets up on the apron and distracts Belair, allowing Natalya to deliver a discus clothesline. She tags in Tamina, who looks for a Samoan Drop, but Belair turns it into a rollup. Unfortunately, Banks chases Reggie inside the ring, distracting the ref from the pin. Natalya takes out Banks, and Belair takes out Natalya, but Tamina rolls Belair up from behind to get the win. Belair and Banks have a shouting match after the actual match, and Reggie blows Banks a kiss.

Intercontinental Champion Big E makes his return to SmackDown. He says that Apollo has made the biggest mistake of his life. Apollo opened Pandora’s Box, and he can’t close it. Big E tells him to come to the ring right now, and Big E will give him the opportunity he’s been waiting for. Apollo doesn’t come out, but Big E does offer an open challenge.

King Corbin comes out to accept, but Corbin doesn’t get a chance to say it before Sami Zayn runs to the ring to accept. He tries to sucker punch Big E, but the champ catches him for a belly-to-belly suplex.

Big E uses his power immediately, flattening Sami with some knees. Sami strikes with some kicks and he locks in a headlock, but Big E fights out and delivers a back elbow. Big E delivers an aggressive Irish Whip before looking for a splash, but Sami catches him with a knee and a shot to the back of the head.

Sami strikes with an elbow from the second rope, but he only gets a 2. He argues with the ref before going for another elbow, but Big E catches him and delivers a series of belly-to-belly suplexes. Sami runs away from the last suplex, but Big E grabs him and looks for a Big Splash on the apron, and Sami moves out of the way as we go to commercial. 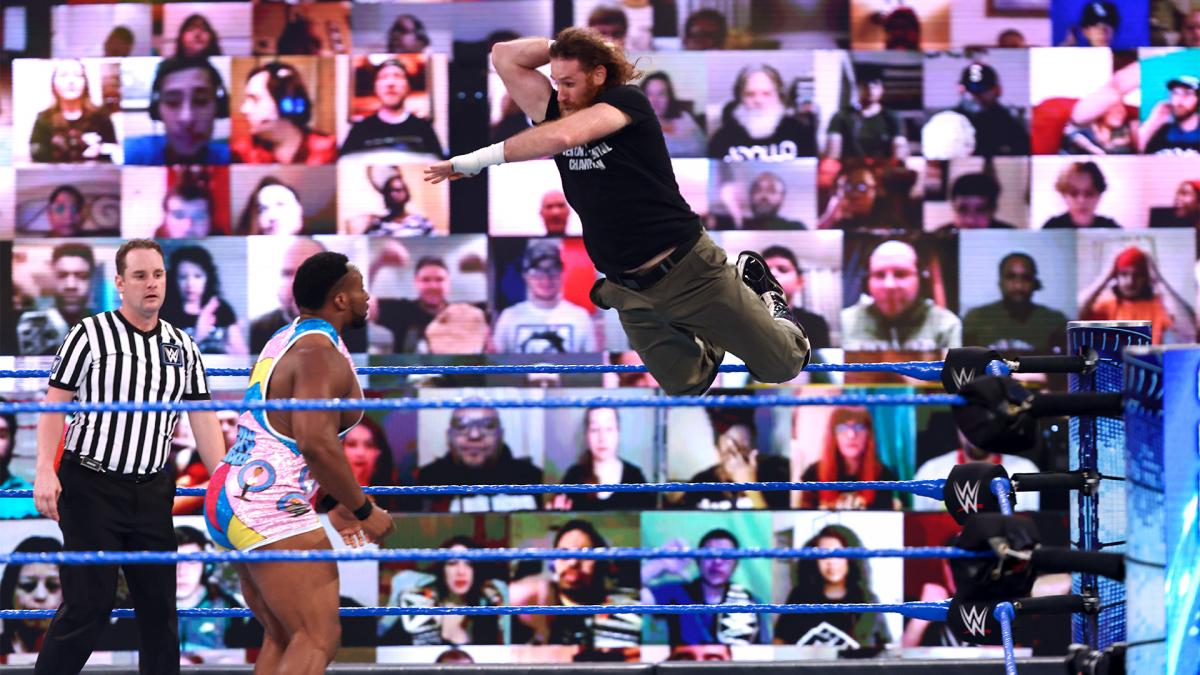 The ref looks incredibly uninterested in this picture. Photo: WWE

When we come back, Sami is delivering a powerful sunset flip powerbomb for a very close 2. Sami slaps and taunts Big E, which obviously wasn’t the best choice, as Big E gets fired up and delivers a clothesline before slamming Sami with the Big Ending for the win.

After the match, Apollo ambushes Big E from behind, delivering multiple Olympic Slams. He grabs the steel steps once more, and drives them into the champ.

Roman Reigns makes his organ-meltingly long entrance to sign his contract for his Fastlane match against Daniel Bryan. Roman gets Adam Pearce, who’s overseeing the signing, to move his chair to the head of the table. He says Bryan doesn’t deserve the match, and he refuses to sign it.

Bryan says that Roman is scared, because Bryan made Jey tap, which is something Roman could never do. Roman signs it and gets in Bryan’s face. Jey interrupts and says that he should be a special enforcer at Fastlane, whatever that means. Edge comes out and challenges Jey to a match next week, and the winner will be the special enforcer at Fastlane. Tensions flare, and a brawl ensues. Bryan gets his hands on Roman, but Edge shoves Bryan away to attack Roman himself. Bryan takes offense to that, and downs Edge with a running knee. 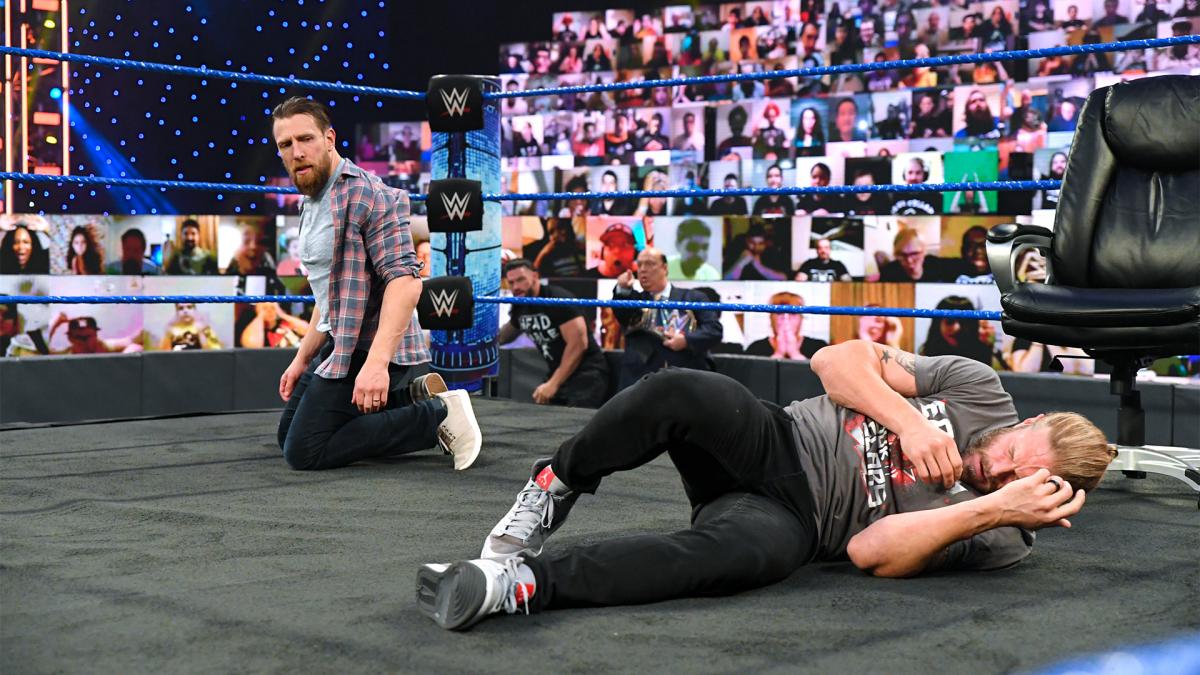 Bryan regrets his actions, as now neither of the competitors in the match to become the special enforcer for his Fastlane match like him very much. Photo: WWE

Very good 8-man-tag match, and I always love seeing Tamina win. Nia/Reggie storyline made me want to retreat into my own body like a turtle, but other than that, good show.