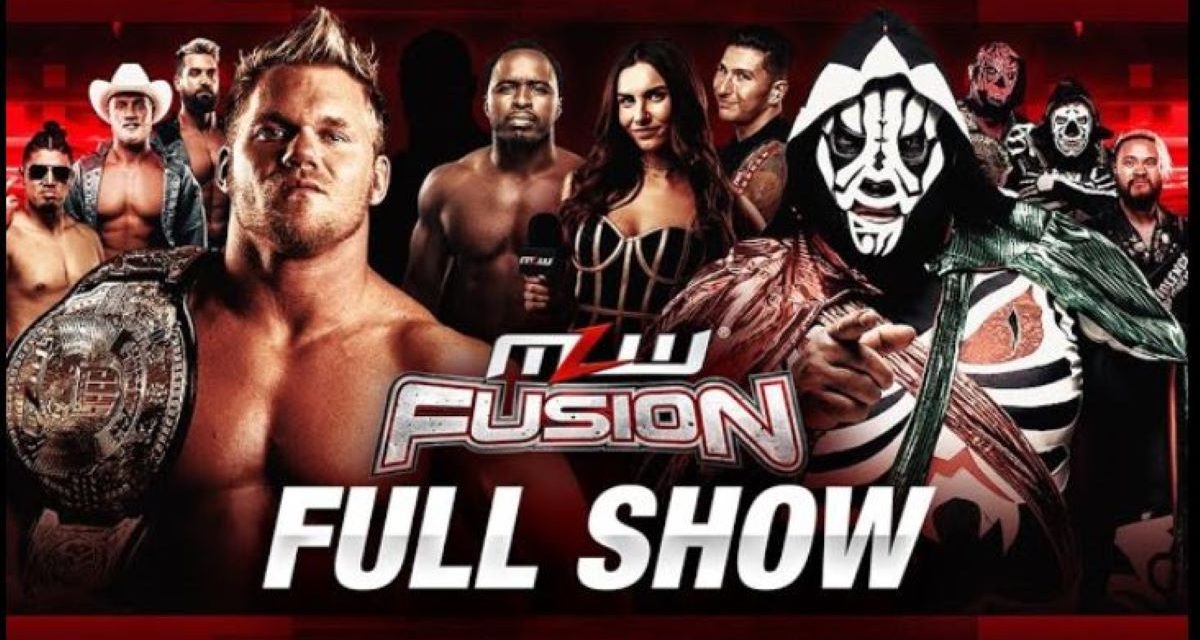 This main event match for the MLW Openweight Championship has a lot of questions to be answered:  Will it be Hammerstone’s Nightmare Pendulum or the numbers of Los Parks that will be the dominant factor?  Also, a masked man is lurking in the background, and that could play a factor in the match.  We’ll just have to wait and see, as we are Live from the GILT Nightclub in Orlando, FL.

Your Commentators Rich Bocchini and Jared St. Laurent have the call.

Cold opening show the aftermath of Jacob Fatu vs. Jordan Oliver, and Calvin Tankman’s involvement with the MLW Heavyweight champ.

Alicia Atout, the Interview Queen, is really wrangling the talent for quotes tonight, and she has Calvin Tankman on Fatu. After taking on the MLW heavyweight Champ, he says “It’s on!”  And out comes Injustice and offer Tankman to come smoke up.  Yeahhhh, this ain’t your WWE-friendly show, folks!  And that’s a good thing!

Know what’s better than that?  It’s your First Match, and more importantly, it’s your 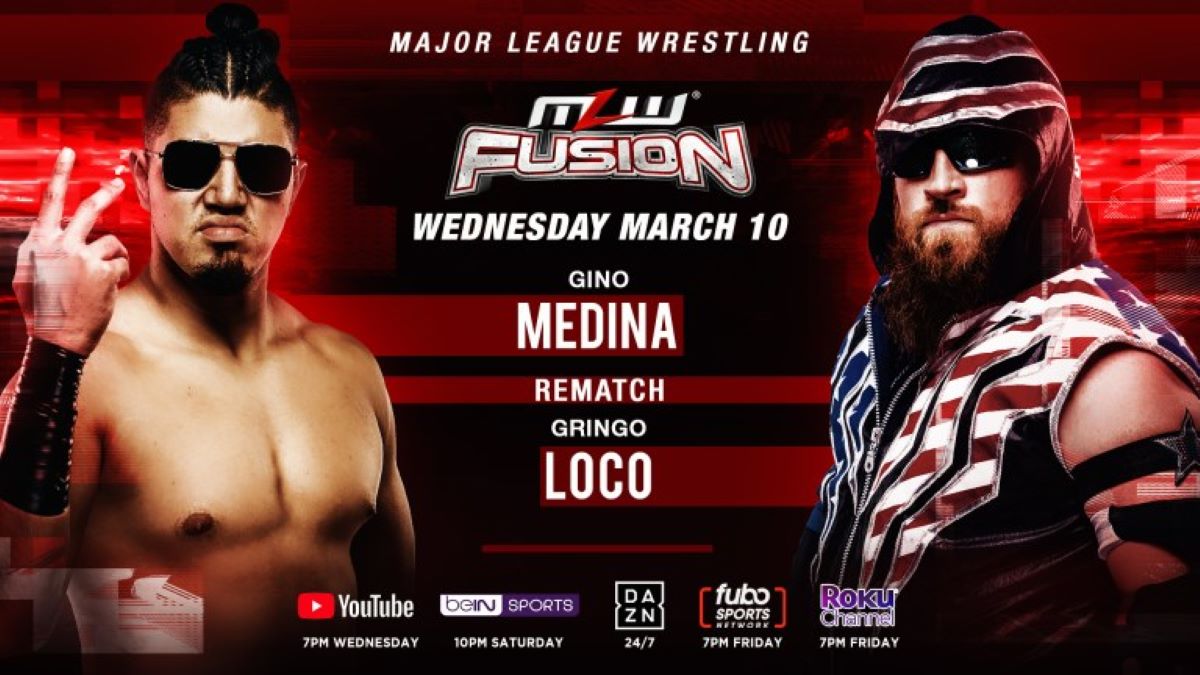 This is the rubber match where Gringo Loco tries to avenge his loss to Medina a few weeks ago, and Medina is not happy with the man who took his name from his dad’s stable.  Once again, both men start with some nice chain wrestling to a standstill.  Both nod to each other in a show of respect.  Gino goes outside the ring, but Gringo Loco goes to the outside with a step-up tope to Medina on the floor.  Loco gets Medina back in and covers for a two count. Loco goes for a springboard splash, but eats a codebeaker by Medina, who covers and gets a two count.

From there, it’s a one-upmanship game in the ring:  Slingshot senton by Gino knocks Loco for a loop, and with Gino in control, he uses the ropes to hit Loco with a knee to the stomach that doubles him over.  Medina up top for a high risk maneuver, but Loco sends him down to the mat, and loco hits a beautiful springboard quebrada, but gets a two count.  Gino tries to take back control, sends Loco to the ropes, who hits a springboard elbow to medina, and gets another two count.  Loco back up for another quebrada, but he slips and Gino takes advantage with a 450 kick.  Gino back to the high risk up top, but Loco cuts him off, and a Spanish Fly from the top knocks both men out.  Ref checks both men, who get back up and both try to reverse each other’s pin attempts, but no avail.  Medina has had enough, and a kick to the back of the head ensures the three count for the win

After the match, Medina says he’s now got rid of “Gringo Culero”. He is untouchable, and addresses the keyboard warrior Richard Holliday, and his tweets and posts, and has his sights sets on him sets

“Filthy” Tom Lawlor (now clean shaven, which is all sorts of wrong) is livid on the bankruptcy at the beach (Thanks, Bocchini!  That was golden.), and promises Kevin Ku will take care of ACH tonight.

Another promo from Azteca Underground, that promises still…Opportunities Abound.

Reports of “a masked man” running about in MLW tonight.  Who could it be, I wonder?  Is it Mads Krügger?  The Dread Pirate Roberts?  Doctor Doom?  MF Doom?  We’ll have to wait for confirmation, I guess.

Next up it’s the MLW Middleweight Top Five rankings, sponsored by Pro Wrestling Illustrated, and they are:

.1 Laredo Kid (who seeks to reclaim the AAA Cruiserweight belt that he lost to…)

Alicia Atout is backstage where a piece of paper is taped up to a wall.  She reports that Lio Rush has an open contract to see who signs for next week’s matchup. She has other assignments, so we’ll see who steps up tonight. But next up is… 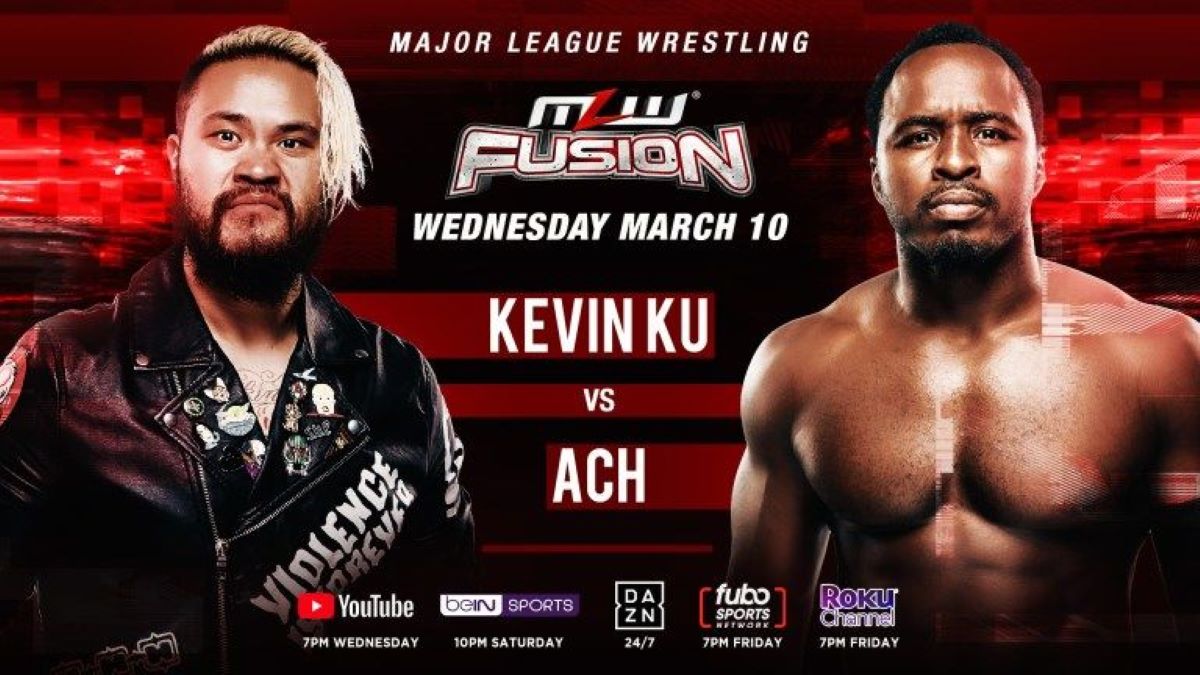 Story is that Ku injured ACH a few weeks ago, and ACH still banged up.  This becomes apparent as he jumps in the ring holding his ribs, which are held in place with kinesiology tape.  Match begins with both feeling out the other, and then goes to Test of Strength, but Ku targets ribs in corner and stomps away at ACH.  Kevin Ku just takes his time and becomes methodical in his approach to breaking down ACH, including a gutwrench suplex.  ACH tries to gain momentum, but Ku takes the wind out (literally) of ACH with a backbreaker.  ACH gasping for air, but Ku keeps up offense.  Ku goes for a Gourdbuster attempt, but is blocked by ACH, who turns it into a superkick.  Kevin Ku is bleeding from the mouth, and really wakes up and puts a hurting on ACH with a nasty looking Angle slam, but it only gets a two count.  Ach goes outside the ring to get some leverage, but gets tripped up by Garrini.  Before more damage can be done by Ku’s Violence is Forever partner, here comes the Von Erich’s jumping in for the save.  ACH sends Ku out, and he goes high risk with a flying bodypress to the outside that knocks all the men down like bowling pins.  ACH musters enough air, gets a superkick to a brainbuster on Kevin Ku, and ACH gets the pin.

Your Winner via Pinfall:  ACH

Next week with be Bu Ku Dao vs TJP.  Getting some serious Jedi master versus Padawan vibes, but that could just be me feeling a disturbance in the Azteca side of the Force.  That could be because there is still talk of a masked man running around the building and St. Laurent and Bocchini are trying to get confirmation.  Like, Zoinks, Scooby, it’s a real mystery.

Alicia Atout is backstage with Dynasty members Hammerstone and Richard Holliday. Your boy Hammerstone is ready, and he says L.A. Park is aging like a stinky cheese. That brings Salina De la Renta out, and tells him to shut his mouth, but Hammerstone says to bring them all out, including “that fat bag of bones.”  Well, L.A. Park is big-boned, so…..not wrong.

Next week lineup for the next MLW Fusion is Los Parks vs. Injustice for the MLW Tag Team titles, then it’s Mil Muertes vs Parrow in what looks to be a powerhouse classic, and then in a couple weeks it’s their big event NEVER SAY NEVER coming up on March 31st.

Injustice comes out and give props to Los Parks, saying they respect the legends but not those “[email protected]$$ mother F****ers” in Contra Unit. You know what? That’s Justice.  Seriously, digging both members of Injustice and the attitude they bring of late.

Alicia is backstage, and someone took on Rush’s contract offer, and promises we’ll find out who soon tonight.

Special look at Calvin Tankman turns to a feed interruption by Contra Unit. Daivari says something in I assume in Farsi, but Fatu has the more succinct translation, in that he’s got Tankman in the crosshairs.  So best get ready, because …yadda yadda yadda Contra.

Now in the Never Say Never Control Center with Alicia, who better be earning a huge paycheck for her coverage tonight. Big signing with Calvin Tankman taking on Jacob Fatu on March 31 for the MLW Heavyweight strap, and I am down for that.  As for who gets to take on Lio Rush, we’ll have to wait until next week, because now we get your Main Event… 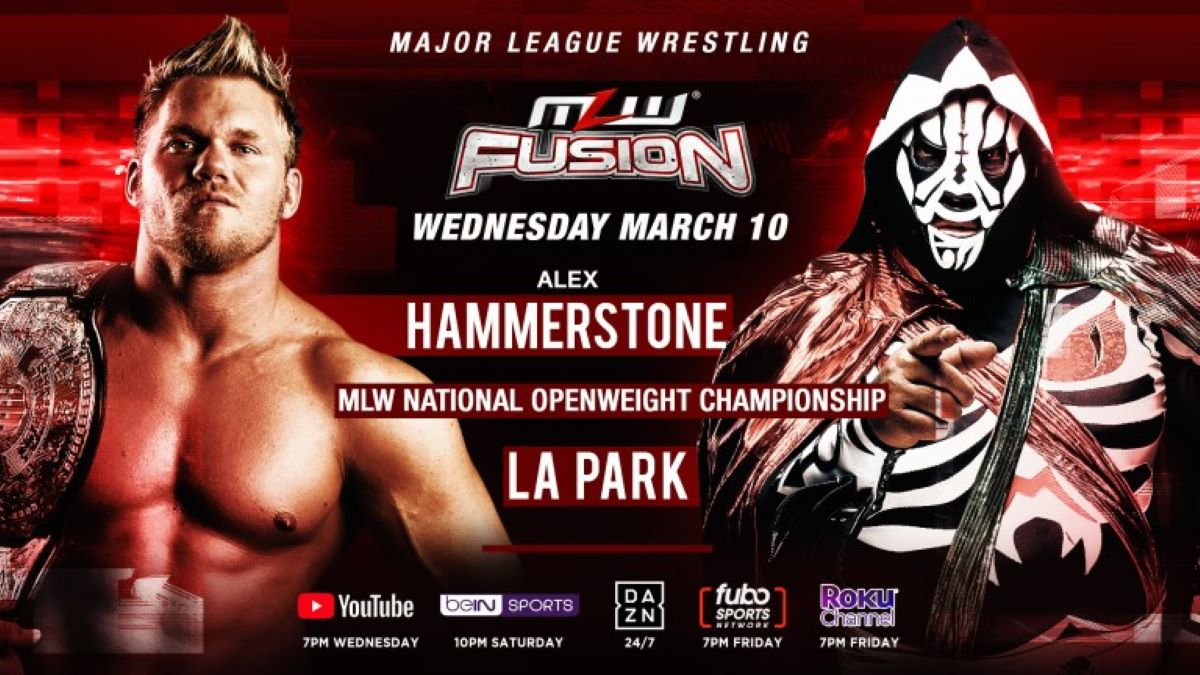 MLW National Openweight Championship: Alex Hammerstone (c) vs. LA Park (with Salina De La Renta and the douchenozzle that looks important, but really, he’s like an fern plant.  He does nothing, but might turn handy down the…oh look at me.  I’m ramblin’ again.  Better wrap this up.)

This match is just a straight-up power match between the two big men. But your boy Hammerstone delivers a dropkick by Hammer knocks out L.A. Park, and then Los Parks come down to watch out for their Papacito Park.  Hammerstone tries to gets back in his groove, but soon the match devolves into shenanigans by Los Parks, who distract and pummel Hammerstone on the outside.  Now L.A. Park takes control, slips out of his belt, and uses it to whip Hammerstone around

This match is just contested under Freebird Rules (or Los Parks Rules) as the numbers game continues with Los Parks, De La Renta just making life for Hammerstone miserable by the minute…but he is the Master of Muscle Mountain, and Hammerstone gets back in control, going up top and goes for a missile dropkick that knocks down L.A. Park to the mat.  He whips Park to the ropes, and connects with a clothesline that knocks down the bag of bones.  Now back in control of the match, Hammerstone, uses a wrist clutch suplex, and ref counts a close two and a half.  L.A. Park still has more gas in the tank, and answers back with a nasty clothesline to the back of Hammerstone’s neck that stuns the champ, and Park follows up with a running knee, but ref counts for just two.  Dazed, Hammerstone goes to the corner, and L.A. Park rushes to tackle.  Hammerstone manages to just dodge, and Park’s momentum goes all the way where his shoulder meets the ring post.  Hammerstone signals for the Nightmare Pendulum, but Los Parks distract again.  Park uses opportunity to get a DDT, and then a big knee.  He covers, but gets another two count.  Hammerstone’s had enough, and then sets up L.A. Park on his knees for a unique ripcord elbow to back of Park’s neck, and good night, nurse!  Your Boy Hammerstone gets the convincing one, two, and three\!

After the match, Hammerstone holds the belt aloft, but we finally find out the identity of the masked man…its Mil Muertes, who comes in and tackles Hammerstone, and leaves him unconscious.  Show fades with all of Promociones Dorado celebrating sneak attack, and the last image flashes to Azteca Underground.

Very strong first match, and I want more of that type of match with Medina/Loco in the future.  I hope that isn’t the last we see of them in the squared circle.  ACH/Kevin Ku had a solid outing that told a great story, while intertwining the simmering feud with the Von Erichs/Team Filthy.  As for the Main Event, I had low expectations with Hammerstone/L.A. Park, but it was a place setter for a bigger match that Hammerstone/Muertes really looks to deliver down the road.  What I’m trying to say is….Mads Krügger, we hardly knew ye.  In any case, see ya in seven, folks!