AEW Dynamite: MJF outsmarts Chris Jericho, but not to take over Inner Circle 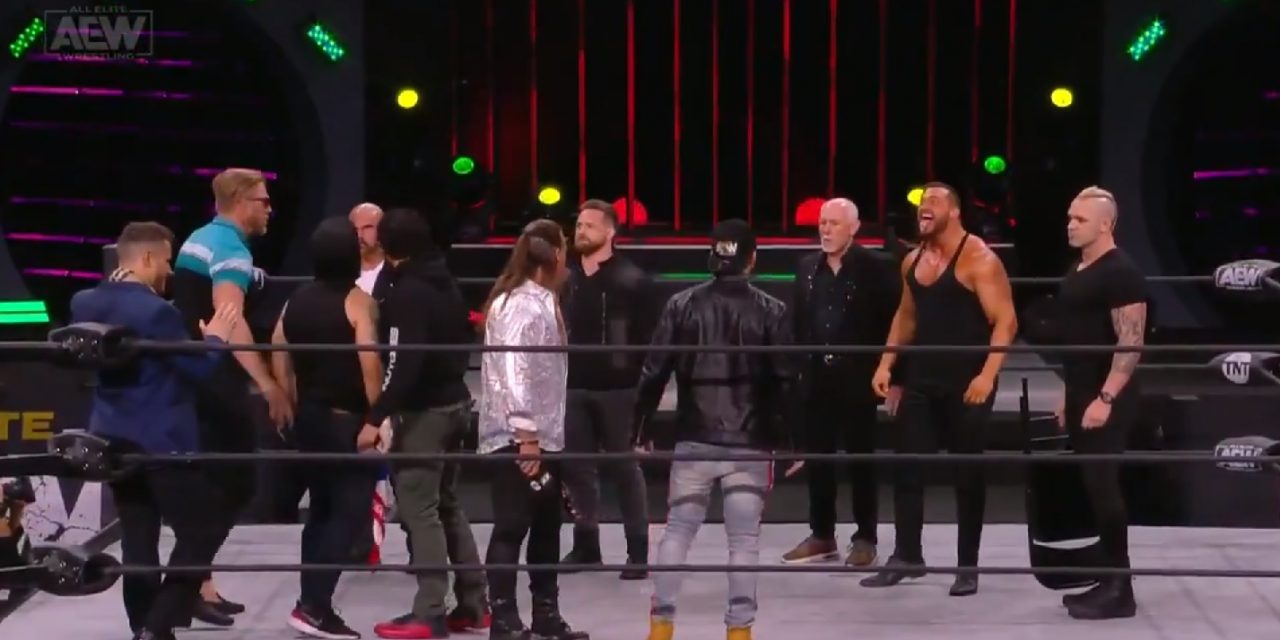 There are so many explosion jokes one could make for this first show after revolution, especially considering the show is called AEW Dynamite. But let’s have some decorum, shall we? Let’s keep it professional. We need to get into the aftermath of what went down Sunday, culminating in the Exploding Barbed Wire Deathmatch, and even some things that were waiting for tonight, like the Inner Circle War Council. Keeping all puns to ourselves, let’s head to TNT and get this broadcast going.

With all due respect to Beauty and the Beast, the tale as old as time is singles matches that are part of a tag team feud. Pac vs. Nick Jackson confirmed for sometime. The announcers take some time during the action to have one of the most important debates of our time: Is it a Sharpshooter or a Scorpion Deathlock. The answer is yes. In a closely contested bout, Fenix manages to get the win, which Tony Schiavone calls one of his biggest to date in AEW.

Eddie Kingston gives everyone The Explanation, meaning his take on what happened at the end of Revolution. The short version: anxiety attack. Jon Moxley also sneaks in some barbs at Kenny’s cheap explosives, suggesting that maybe Impact paid for them or they were ordered from Wile E. Coyote’s supplier. I’m not sure the most untamed portions of the internet will accept this even for a second, but I appreciate AEW at least working the technical letdown into storylines.

I seriously want to know how many different wrestlers AEW has under contract or are working with, because it seems like you never seem the same jobber twice on Dynamite. Cody wins this one quickly and efficiently despite doubts about the health of his left shoulder.

Schiavone wants to ask Rhodes about his shoulder and recent matches, but surprisingly, Penta El Zero Miedo has some bilingual trash talk for him. Insulting Cody’s ability to pick up his newborn baby is a step too far, however, setting off a melee that requires half the roster to break up.

Chuck Taylor and Orange Cassidy are at an arcade, which apparently still exist. They have an interesting proposition: One more match with Miro and Kip Sabian, and if the Best Friends lose, Chuck will be Miro’s butler permanently. There’s also going to be a stipulation that involves video games all around the ring. I’m not sure I want to see a bunch of classic games get smashed, but I do what I have to do for this gig.

Sting gets to talk to his personal announcer, Schiavone, and has nothing but good things to say about Darby Allin. Lance Archer, now doing his own talking, interrupts for a few minutes with a warning then leaves. Sting bids Schiavone adieu a minute or two later.

Johnson is 2-0 as a singles wrestler in 2021, a fact I would not have guessed in a million years. Alas, Page is getting something of an immediate push after joining from Impact, and just like that, Johnson’s zero is no longer. Dustin Rhodes arrives to prevent a post-match beating because Marshall can’t be bothered to stick around. Not sure a QT heel turn is what anyone was asking for, but hey.

We need to find out how Adam Page is spending Matt Hardy’s money, and part of it went to a super fancy riding mower. John Silver and about a half-dozen other Dark Order members join him for a joyride and darn near tip the thing over when it takes off.

It’s time to hear from the champ, which really means Don Callis is going to talk for a bit. He won’t confirm or deny whether the lack of a big explosion was on purpose, but he sure sounds like it is because he claims they took away the opportunity for Moxley and Kingston to be martyrs. Eddie comes to the ring and gets made fun of in person, but he isn’t afraid to take a shot at Kenny Omega even though the presence of the Good Brothers means he is badly outnumbered. Mox makes it a legit battle, and as Omega tries to gather himself in the ring, Christian Cage walks down the ramp. After an exchange of words we can’t hear and a disingenuous handshake offer by the champ, Omega tries to go for a cheap shot, Christian tries for his finisher, and Callis has to pull his friend out of the ring. He left behind his belt, though, and Cage picks it up and makes it seem he may already have his mind on it.

Give Itoh credit for committing to her gimmick, because even though chaos breaks out before the bell, she finishes her entire song on the ramp. Less credit goes to Vickie Guerrero for putting her hands on Rosa, because that’s a good way to get yourself beat down. Rosa finishes Itoh with a side piledriver, but Baker comes in the ring with her minions and immediately subjects her to the Lockjaw. Baker and Rosa might need a steel cage match or something to settle their feud.

It’s going to take more than losing his Q1 revenue to keep Big Money Matt Hardy down. He’s signed The Butcher and The Blade to bolster his group, vowing to destroy the Dark Order for what they did to him.

Title matches are always good for waxing poetic about the competitors’ backgrounds, and this one is no different as the announcers discuss Allin’s decorated amateur wrestling background as well as his antics during the Street Fight on Sunday. Only in pro wrestling would both topics make sense together. Sky always seems to be whiplashed back and forth between being kind of invisible and getting opportunities you know he isn’t going to cash in on, and while he looks good again in this bout, he takes the loss after an inside cradle. That amateur wrestling background!

Don’t expect any good sportsmanship from Sky. He locks in a heel hook after the final bell and leaves the champ in agony after referees finally arrive to break up the hold. Sky looks a his own hands and flashes an evil smile, cementing the heel turn he’s been teasing for weeks.

If the last match of the night is complete, what’s still left? Ah, that’s right the Inner Circle War Council. Chris Jericho teases that it might be time for a new member, but MJF feels the opposite, suggesting it might be time to let somebody go. As if on cue, Sammy Guevara’s music hits and the Spanish God steps out on stage. He’s got something Jericho needs to see, and he’s emphatic about it. Guevara has a hidden camera in the Inner Circle dressing room, showing MJF rallying Jake Hager, Santana and Ortiz to depose the Demo God as leader. All three menace Jericho, then turn and prove they are on his side. His deception revealed, it appears MJF is fired. Can Maxwell talk his way out of this beating? Actually, maybe. MJF says he didn’t want to take over the Inner Circle because he was too busy building his own. The lights go out and come back on to reveal Wardlow, FTR, Shawn Spears and Tully Blanchard. Handcuffs are used to restrain Santana and Ortiz and Jericho ends up bloodied. Jericho crawls for his bat, but Blanchard yanks it away and hands it to MJF. Cool, now tell us the group name so Jim Ross doesn’t have to call it “this new organization.” A helpless Jericho is powerbombed from the stage down through some tables by Wardlow, and yes Schiavone, there is a new faction in town. I have to say I dig it. See you in seven!

Nothing super special tonight, but the pairing of Moxley and Kingston should be quite entertaining, and the swerve at the end was one I did not see coming. More wrestlers grouping up is starting to give the promotion a bit of a New Japan feel, and that’s not a bad thing at all. The latest in a long line of themed episodes awaits next week.