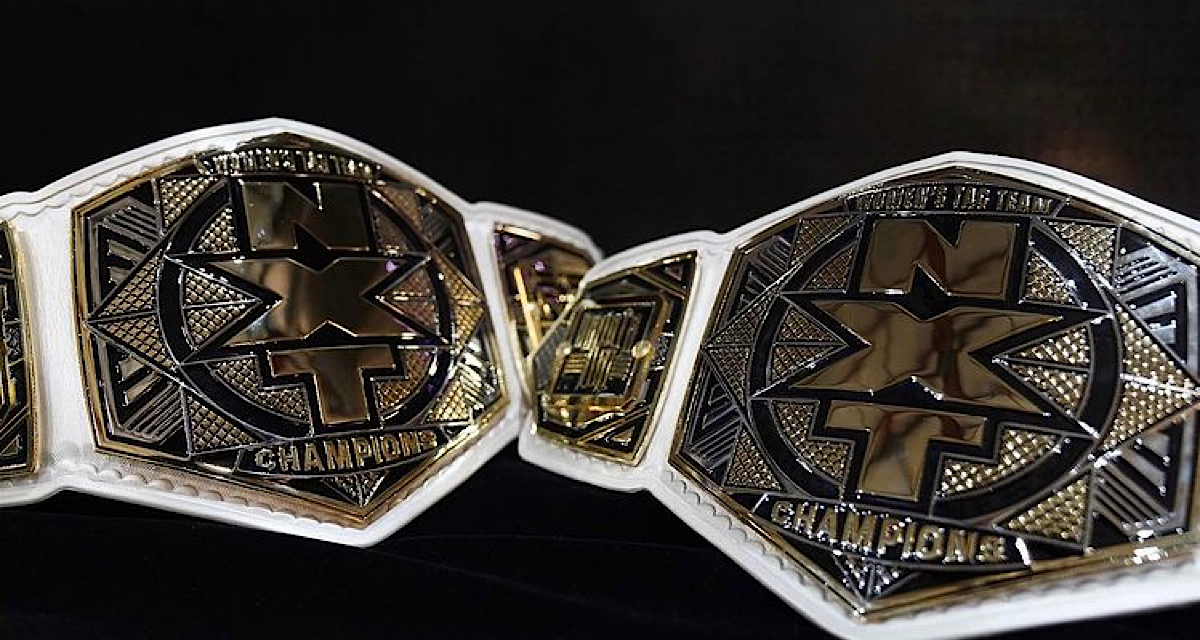 Shirai dominates in the opening minutes, but Storm reverses the momentum during picture-in-picture. She superplexes the champion, regaining control, until Shirai back-body drops her and Moonsaults to the floor. Shirai blasts her with double knees but misses the finishing Moonsault, allowing Storm to capitalize with Storm Zero for only two. Storm misses the headbutt, and Shirai applies the Crossface for the submission victory. The challenger’s Beetlejuice gear couldn’t give her spiritual powers, but it did power her through another solid championship showing by Shirai.

NXT Champion Finn Balor chews out Adam Cole before their championship main event. Two of NXT’s greatest ever, no doubt.

NXT Tag Team Champions Burch and Lorcan rarely ever compete, so adding a women’s counterpart is detrimental to already scarce time. Meanwhile, Atlas delivers an offensive string and surprisingly takes over Dunne. The latter though utilizes joint manipulation, snaps the fingers, and applies a brutal armbar to win. Dunne takes the mic: he dares anybody to challenge the Bruiserweight — even though he fair-and-square lost at NXT TakeOver last month.

Imperium’s Marcel Barthel references his significant RingKampf days with Timothy Thatcher. The stable wants him in. And probably so does everyone.

Leon Ruff sends a heart-felt message to Isaiah “Swerve” Scott. Ruff deservedly earned his opportunities and will shut Scott up next week.

A cloverleaf submission is applied and held onto almost immediately. After Kai finally escapes from Blackheart, they simultaneously floor each other with pump kicks, and picture-in-picture commences. Gonzalez works down the opposition until Moon makes the hot-tag comeback and Blackheart eventually does too. The tandem maneuvers on Kai, but Gonzalez again powers over them. With some friendly fire, Moon hurricanranas Gonzalez outside while Blackheart pins Kai! New champions already after legitimately one hour.

Surrounded by the NXT women’s roster, new champions Moon and Blackheart celebrate their victory. One duo, Candice LeRae and Indi Hartwell, isn’t joining in. They leave the bunch and meet with Johnny Gargano and Austin Theory, who discovers that his therapist last week was paid off. Theory learns that Dexter Lumis thinks his abdominal region is mediocre, which makes him explode.

Carter gives Li an unexpected amount of offense, but the latter recuperates. Carter’s injured partner Kacy Catanaro supports her ringside with crutches, as Li targets the knee. Before Carter gets potentially hurt though, Catanzaro interferes, whipping away at Li with crutches until Boa halts the attack. Another week, another pointless Tian Sha angle.

Even though Zoey Stark is clearly suited more as heel, the given video package tells yet another underdog story.

GYV’s Zack Gibson calls Legado Del Fantasma “Santos Escobar’s puppets.” He isn’t entirely wrong, as Joaquin Wilde and Raul Mendoza attacked Breezango last week on behalf of Escobar. Speaking of which, it’s the astronauts —  it’s Breezango! The helmets come off, and no, it’s actually MSK, who Gibson and James Drake took out last month. The distraction allows Wilde to capitalize with a roll-up for three. MSK’s Wes Lee smashes the helmet over Gibson’s hand (eye for an eye), while Breezango eventually does appear to attack LDF. Side note: Fandango surprisingly towers over everybody and looks in great shape.

Former champions Dakota Kai and Raquel Gonzalez aren’t too compliant with the interviewer. However, from behind, NXT Champion Io Shirai personally issues a challenge to Gonzalez. Strap the rocket!

Will Timothy Thatcher join Imperium? Hopefully, but partner Tommaso Ciampa would rather fight against them — next week specifically.

While stablemate Roderick Strong has completely moved on, Cole contrarily enters with Undisputed ERA music, graphics, and gear. Refreshingly, the matchup starts with some calculated chain-wrestling — a Balor special at this point, with Cole eventually taking control. Balor attacks Cole’s left knee to reverse the momentum, and taking it outside, he suplexes the challenger onto the steel ramp. Back from picture-in-picture, Coles hits an ushigoroshi, but Balor recuperates with a slingblade and corner dropkick. He misses the Coup de Grace, and Cole capitalizes with a superkick and crossface. Cole hits the Last Shot and Panama Sunrise for two-counts! The challenger is thrown outside and meets face-to-face with a returning Kyle O’Reilly behind the barricade. This allows Balor to deliver 1916 outside and a Coup de Grace to victory. Undeniably the yellow brand’s greatest with both always delivering.

Cole goes from begging to low-blows, but O’Reilly has him scouted. He pummels his former brethren outside and attempts a steel-steps brainbuster before referees separate them. Meanwhile, Balor is being eyed in-ring. “What took you so long?” says Balor. Behind him is Karrion Kross. Two-night TakeOver, here we come!

While the other Wednesday program has a clear women’s spotlight deficit, NXT arguably has an excess. The amount of championships in WWE is another argument completely, but I believe NXT needs to balance the women’s output on each show. Both divisions considered, NXT has too much talent, which inevitably leads to cramming — every week. Cut the fluff. Anyhow, despite this mini-rant, tonight’s episode was pretty good, and without saying, Balor and Cole stole the show.