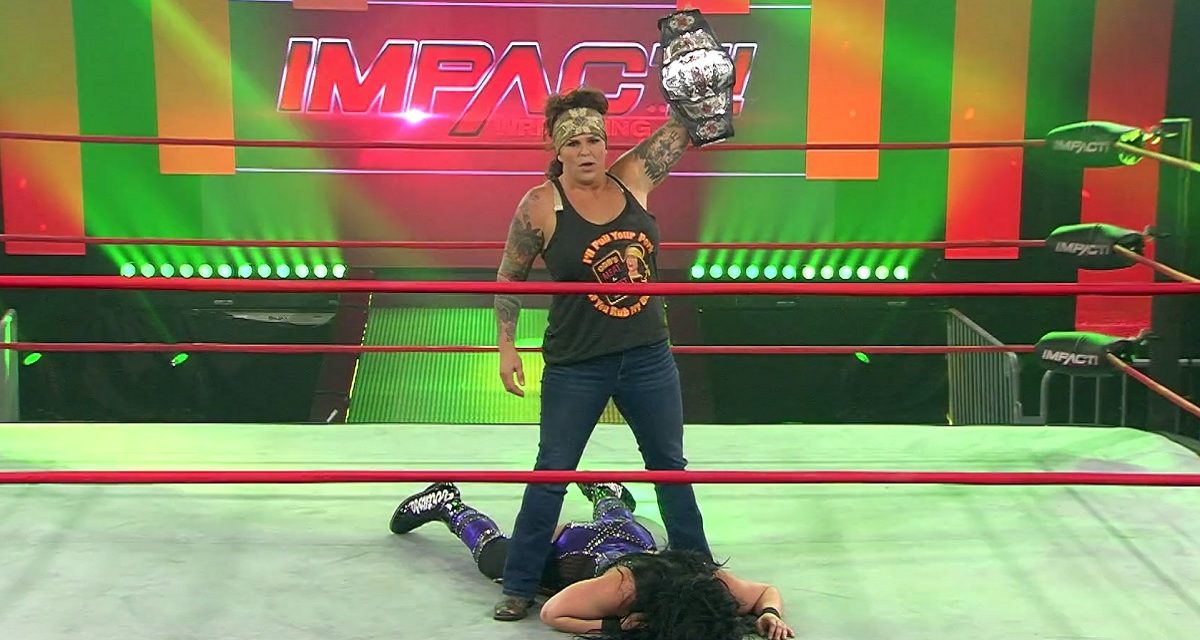 With Sacrifice only a couple of weeks away, this week’s episode of Impact was all about building that card. And after a show filled with some strong matches – and in particular, a three-way Knockouts main event match that ended with Deonna Purrazzo laid out by her new challenger ODB  – things are looking good.

The winner of this match becomes the number one contender for the X-Division Championship.

Bey and Austin joined forces to double-team the larger Taurus, including hitting him with a double-dive on the floor. They then turned their attention to each other while Taurus recovered. He pulled Bey hard to the floor from the outside, then caught Austin in a dive attempt and slamming him hard to Bey who was still on the floor.

Taurus dominated Austin for some time, and then worked over Bey. As Taurus was going for a big vertical suplex on Bey, Austin hit them both with a missile dropkick. Taurus then Bull-Rushed Austin down and hit a nice Pop-up Samoan Drop on Bey. Bey and Austin went back to their temporary alliance and sent Taurus to the floor. Bey tried to double-cross Austin with the Art of Finesse, but Fulton interfered from the outside, and that left Bey prone to The Fold and put him down for the count.

This was a fun opening match that gave everyone a chance to shine. Taurus continues to impress and is so unique in terms of look and style in the X-Division that his stuff is a lot of fun.

Gia Miller interviewed Jordynne Grace and Jazz, who are the number one contenders to the Knockouts Tag Team Champions. They accused Deonna Purrazzo of being the ones who laid out ODB last week, and said that she would pay for that in her match with Grace this week. Fire N Flava interrupted the interview and said they would be watching Grace’s match with interest. Grace said she was going to talk to Scott D’Amore and have Kiera inserted into her match with Purrazzo.

In the back, Brian Myers barged into Matt Cardona’s locker room and tried to play nice. Cardona told him that as the special ref for Myers’ match against Eddie Edwards, he was going to be impartial. Myers tried to convince him to lean in Myers’ favour, but Cardona refused to his chagrin.

The story early on was Tenille trying to escape the power of Havok, and getting stymied every time she tried a move. Some distraction by Kaleb got her the edge, heading into a commercial. Back from the break, and Tenille was in control, finally getting Havok down on the mat. Tenille used a variety of stomps and wear-down moves, but couldn’t hold Havok’s shoulders down. Havok finally powered up to break a headlock, and then smashed Tenille with a backbreaker. Havok was going to put Tenille away, but Kaleb again provided a distraction. While Havok turned to deal with him, Tenille took advantage and finished Havok with The Spotlight (a running kick to the head) and got the pin.

After the match, Nevaeh ran to the ring an pummeled Kaleb, dropping him with a huge spinning DDT. Nevaeh then checked on Havok’s condition, and it seems like they’re back on the same page again.

This was good. It remains to be seen as to whether they will do something with this in terms of pushing Tenille up towards title contention. If they are building towards a Havok-Nevaeh feud, this could be a good first step – say, Nevaeh beats Tenille next week, that could be the catalyst for jealousy. Lots of possibilities here.

A Sami Callihan hacker video aired. He was in the Skull and Bones Wrestling Academy in Toledo, Ohio, where Trey Miguel is the head trainer. He trash-talked Miguel, then attacked a bunch of the trainees and instructors, including trainer Conrad Kennedy III. Sami bashed CK3 with a chair and then tried to recruit one of the students, saying that he’d be better off under Sami than with Trey who Sami said has no passion. The student agreed to speak with Sami, and then Sami cut the transmission. The segment was good, but the stylized editing and effects in the hacker video made it a bit hard to hear things clearly.

.@TheSamiCallihan just made things as PERSONAL as possible with @TheTreyMiguel by TRASHING his wrestling school #IMPACTonAXSTV pic.twitter.com/BZlQYPpydg

TJP was hanging out in Swinger’s Palace, when Austin and Fulton walked in. Bey walked in and said that Austin can only win matches if Fulton helps him. TJP basically manipulated them into having a match against each other. Swinger said that they couldn’t fight in the casino unless and until betting lines could be established.

The Flashback Moment of the Week saw Sting retain the World Championship over Rob Van Dam at Sacrifice 2011.

A Violent By Design video aired. Eric Young said that Deaner had to be disciplined for losing to Jake Something last week. Doering took Deaner into a dark storeroom and we heard him beating up Deaner off-camera. Afterwards, Young said that he was doing it for Deaner’s own good, and Deaner agreed. Young and Doering left him in the storeroom, locked the door, and left.

AEW owner Tony Khan and announcer Tony Schiavone did another paid ad. They hyped their PPV this Sunday and showed clips of Shaq and Jade Cargill who will team together tomorrow night in what could be the biggest trainwreck in the history of ever. Khan said that he was now the leader of the wrestling war and that Impact and NJPW were under his command in said war. They ran down tomorrow’s show and the Sunday PPV.

A Moose hype video aired. He said that he is sick of being disrespected because people didn’t recognize the legitimacy of his TNA World Heavyweight Championship. So to get that respect, he would beat Rich Swann to capture the Impact World Championship.

Match 3: The Good Brothers and FinJuice vs. XXXL and Reno Scum

FinJuice and the Good Brothers continued their frenemy ways in this one, trying to one-up each other by showing off how they could hurt their opponents. Between the two teams, they completely dominated their opponents, despite occasionally being distracted from the business at hand as they needled each other. The Good Brothers ended things with a Magic Killer on Thornstowe.

After the match, the Good Brothers and FinJuice competed to get the prime spot in front of the hard camera to strike the winning pose. They exchanged words and stared down each other.

XXXL and Reno Scum were pretty much sacrificial lambs here – in any other time, they would likely have brought in some local enhancement talent for this spot.This was a complete squash, simply here to build for the inevitable match between the Good Brothers and FinJuice. In that respect, it worked perfectly.

Winners: The Good Brothers and FInJuice

A Rich Swann hype video aired. He said that his heart, determination, and desire would be enough to beat Moose at Sacrifice.

In the locker room, the Good Brothers and FinJuice were jawing at one another. This led to them agreeing to a title match at Sacrifice.

Early on, Eddie outwrestled Myers, hitting a flying somersault dive to the floor within seconds, to take us into the commercial. But when the match returned, Myers was in control. Eddie fought back, and nearly got a pin after a Northern Lights Suplex and a Blue Thunder Bomb. The advantage went back and forth, and Cardona was calling it right down the middle, including stopping a count when he saw Myers’ foot on the ropes when Eddie had him down for the pin.

Looking to end things, Myers reached into his boot and pulled out a weapon which he loaded into the inside of his elbow pad – right in front of Cardona. He then hit Eddie with a big clothesline, which he calls the Roster Cut. He covered Eddie for the pin, but Cardona couldn’t ignore the blatant use of the weapon and called for the disqualification. Myers was upset, telling Cardona that he should have overlooked it because of their friendship, but Cardona wouldn’t hear of it. Myers left in frustration.

The match was fine, though ultimately was just a backdrop to build up a confrontation between Myers and Cardona which sounds like it could be the second-most exciting feud of all time; all the rest are tied for first.

Gia Miller interviewed Deonna Purrazzo, who was accompanied by Kimber Lee and Susan. Purrazzo wasn’t thrilled that Kiera had been entered into her match against Grace, but said that she would adapt. She admitted to being the one who attacked ODB last week, and said that both Grace and Hogan would know what that felt like.

Purrazzo’s Knockouts Championship was not on the line in this one.

Grade and Hogan immediately threw Purrazzo out of the ring and started fighting each other, leading to a commercial break literally 15 seconds into the match. Back from the break, and Hogan and Purrazzo had joined forces to beat down Grace. Grace used her power to even the odds, and she hit both opponents with big moves. But in a great spot, she looked to hit Purrazzo with a Tilt-a-Whirl Backbreaker, but Purrazzo floated over and locked on an armbar, forcing Grace to reach the ropes to break the hold.

.@DeonnaPurrazzo is the master of finding an armbar from any angle. #IMPACTonAXSTV pic.twitter.com/MSicESkwHV

The intensity picked up midway through with each competitor getting in some good moves, including a beautiful move that saw Grace transition a roll-up pinfall attempt into a hard German Suplex.

Later, they had a three-way slugfest in the middle of the ring, which looked good.

The women on the outside started getting into it, and soon everyone but Grace was involved in a brawl on the floor, so Grace flattened them all with a flying dive through the ropes. After that, she looked to end things, but when she went for a Grace Bomb on Hogan, Tasha Steelz pulled her partner out of the ring, and Jordynne crashed hard. Staggered, she was easy pickings for Purrazzo, who slid into the ring and rolled up Grace for the pin.

After the match, everyone was still laid out on the floor, except for Grace, who attacked Steelz and they fought on the entrance ramp all the way to the back.

Purrazzo was celebrating her win and ODB ran into the ring and flattened her with a BAM! She stood over the fallen Purrazzo and held up the Knockouts title in the centre of the ring, making her intentions known.

This match was excellent. Well-paced and well-executed, with everyone looking strong. The thought of an ODB title reign isn’t particularly cause for celebration, but Purrazzo has a way of making any opponent look good. The Knockouts Division continues to be some of the best stuff on TV these days.

Bookended by two really strong matches, and with fewer comedy segments than in most weeks, this was a very strong episode. With nearly every segment contributing to the build to Sacrifice, this show felt like it had strong purpose, and nothing felt like it was just going through the motions. More weeks should be like this one.