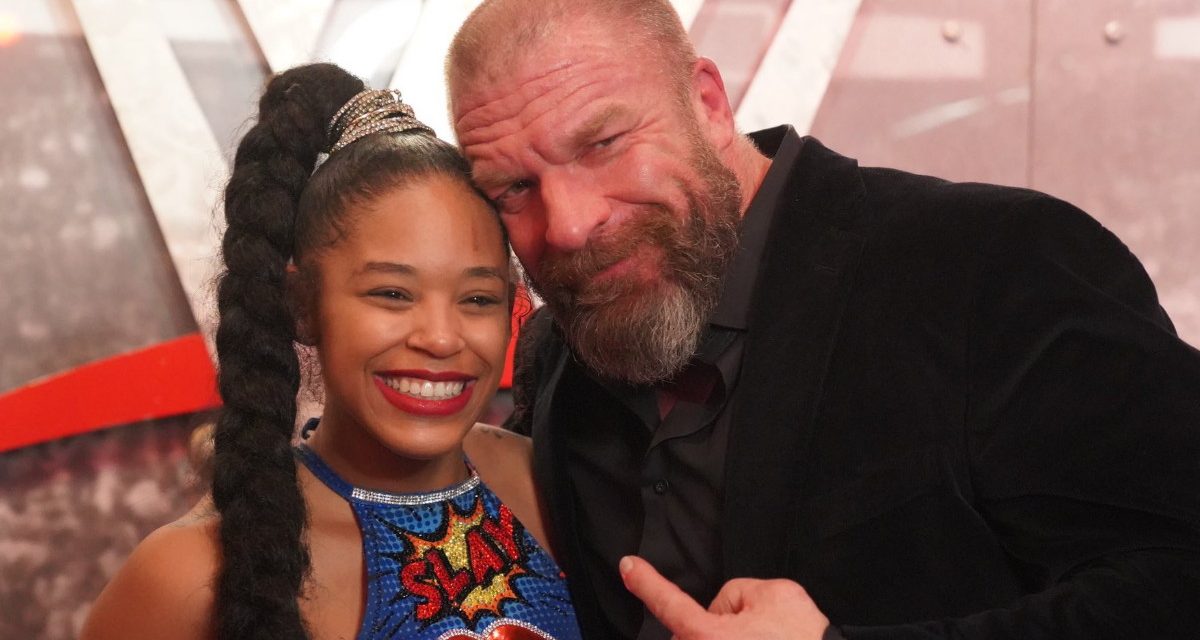 He sees the card as “spectacular” and found himself getting more and more excited as the card came into shape.

Triple H — as he is known in the ring — began Thursday’s call by lauding Johnny Gargano defending the North American title against Kushida as a “dream match.” While he didn’t talk much about the Japanese import, Levesque said that Gargano is showing a “totally different side of himself” and further proving what a “well-rounded performer” that he is.

There are two finals for the Dusty Rhodes Tag Team Classic tournament at Vengeance Day.

The men’s match has MSK (Wes Lee and Nash Carter) facing the Grizzled Young Veterans (James Drake & Zack Gibson), and the winner gets an NXT tag title shot. Levesque can’t wait for the UK-based Grizzled Young Veterans to show the American audience what they can do — “COVID certainly put a damper on getting them into the company in the U.S.”

In the first-ever women’s tournament,  it’s Dakota Kai & Raquel González against Ember Moon & Shotzi Blackheart. The winning team will get to face the WWE Women’s tag team champs down the road.

He said “it speaks to the strength and the depth of the women’s division in NXT” that almost half of the card is women, and noted that the largest female class in history at WWE’s Performance Center at the moment.

It’s common on these calls for HHH to rave about NXT Women’s champion Io Shirai, and he even referenced previous love, and just said, “Io is Io.” Shirai defends in a Triple threat match against Toni Storm and Mercedes Martinez. Levesque loves the way that Toni Storm is “reinventing herself.”

All the women in major matches related to a media question, about whether there could be more women’s titles, especially tag team. Levesque noted that “those conversations happen” but personally, his thinking is “don’t water things down.”

Pete Dunne challenging for Finn Bálor’s NXT title has been a while in the making, Levesque noted, as so much of the UK-based talent was prevented from traveling to Florida for NXT in the U.S. “This is going to be something special,” he said of the bout.

Of the five matches, Levesque said that any of them could be a “show stealer.”

Could there be a bigger presence for NXT at Mania this year?

Levesque was cautious, noting that NXT being a part of the show — like last year’s match, with Charlotte Flair defeating Rhea Ripley to win the NXT Women’s Championship, “helps the brand and continues to drive it forward.”

But it’s always a battle, since there are so many wrestlers over all the brands, and that everyone is fighting for the “big spot of the year.”

Will that NXT match be Royal Rumble winner Edge challenging for the NXT title, currently held by Bálor?

Levesque said that Edge’s mindset is that he “wants to build young talent.” When he was at NXT a couple of weeks ago, confronting Bálor, HHH said that Edge had a “smile on his face” all day.

But, the WWE VP also didn’t reveal all the company’s cards, and noted that Edge is, quite properly, still “playing things across the board” and could face any of the champions at Mania.

TOP PHOTO: 2021 Women’s Royal Rumble winner Bianca Belair and Triple H. He tweeted: “Proud … doesn’t even begin to describe the feeling I had watching @BiancaBelairWWE. From the day she walked into the #WWEPC, every #NXTTakeOver, the #RoyalRumble, and next #WrestleMania… there is no limit how bright her star can shine!!! @WWENXT”