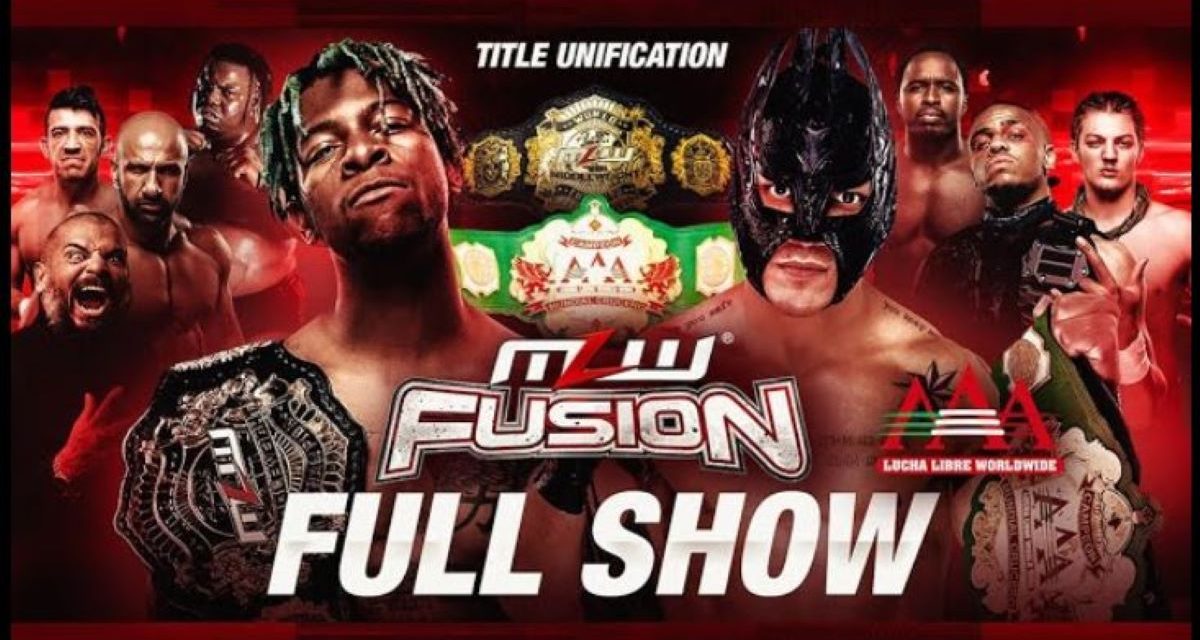 Cold Open starts the show, and its a good promo to highlight tonight’s Main Event….

If I had to explain what to expect in tonight title unification match between the current AAA Cruiserweight champion Laredo Kid and The Man of the Hour, Lio Rush, as evidenced by the opening segment I would say this:

Little hand on the clock says it’s time to rock and roll, so let’s start the action!

Live from the GILT Nightclub in Orlando, FL. Your Commentators Rich Bocchini and Jared St. Laurent have the call, and we have some matches to get through tonight, like your…

ACH is not in a good mood, as his ribs are taped up from the beating he received from Team Filthy (you might say he’s Jordan Myles without the smiles.  *Ahem*).  In any case, as Pillman and ACH start to lock up, Team Filthy comes out to scope out the action.  Meanwhile, both men in the ring are laying in chops back and forth.  It’s evenly matched, but Pillman targets the ribs to gain the upper hand.  He catches ACH in a head scissors to put more pressure on the injured ribs of ACH for a submission, but ACH manages to get out.  ACH tries to get momentum on his side by hitting the ropes, but a flash powerslam by Pillman knocks the air out of ACH for a cover, and gets a two count for his troubles.  ACH answers back by taking out Pillman’s legs and hits a huge dropkick, but ACH is hurting, and just can’t quite cover up for the pin.  Pillman goes up top for a high risk maneuver, and ACH tries to stop him twice and gets shoved back down.  End has ACH hit a big somersault kick to Pillman using ropes, followed by a brain buster for the pin

Your Winner via Pinfall:  ACH

After the match, Team Filthy surround the ring like a wild dog pack, and take out ACH. It looks bleak for the Texas native, until he gets saved by the Von Erichs, who run off Team Filthy to the back. Post beatdown, ACH and Von Erich are not having any of this. Texas boys stick together, after all (even if two of the boys hail from Hawaii, but really…it’s just semantics).

We got back to Salina de la Renta and her proposal to buy up IWA, at the behest of the new owner of Promociones Dorado.  Savio Vega responds to the IWA offer, and acknowledges things have been tough due to the pandemic.  But Vega states IWA was made for the fans, and not for some shadow interest to buy it. So…no sale. Maybe if a subRedditor jacked up the price..?

We go back to last week’s recap of the MLW tag team championship match where Los Parks pulled a switcheroo to keep the belts from TJP/Bu Ku Dao. No word from the latter since the end of the match. But now it’s time for…

This is a glorified squash, a classic “small man vs. big man w/ moves” match, and the Heavyweight Hustle that is Tankman moves like the second coming of Bam Bam Bigelow.  I tried to get into the match, but some of the spots felt off their timing.  Big moves (literally) of the night were Tankman with a dropkick with some nice elevation.  Tankman went for a running shooting star press that misses Zenshi, and Zenshi responds with his own and gets a two count for his troubles.  Zenshi with his +56 (Over the top rope 619), but it can’t knock the big man down.  Shoulder tackle by Tankman from the ropes send Zenshi flying. Tankman goes for the big guns with a backbreaker and clothesline that turns Zenshi inside out, but just gets 2a two count.  Zenshi some desperation moves in, but his 450 is caught by the Heavyweight Hustle as he hits an explosive Tankman Driver with authoritah for the three count.

Your winner via Pinfall:  Calvin Tankman

Flashbacks to last week’s Baklei Brawl that I was hoping time (and plenty of whiskey) would help me to forget this…but alas, it is not meant to be. We get a recorded promo by the majordomo of Contra Unit, Josef Samael, who says Krügger is in the mountains of Russia waiting for his signal, and he promises Injustice will be done, and then Contra will get all the gold.  Hail Contra.

Earlier today with The Man of the Hour, giving his thoughts:

Now to Alicia Atout with Richard Holliday, trying to get to the heart of the scandal. Worst. Zoom Meeting. Ever! And this is coming from someone whose work team was let go via Zoom as a “reduction in workforce.” But I digress.  Holliday is insulted by her accusations and promises his father/lawyer will sue the pants off her.  Well…I won’t get those precious minutes back.

On to the MLW Top Ten Rankings, sponsored by Pro Wrestling Illustrated, and they are:

Recap of the simmering feud going on between Jordan Oliver and Contra Unit, and how Contra injured former Injustice member Kotto Brazil so bad he had to retire, and now all that Oliver and Reed think about is getting justice.  So now you know the rest of the story, as it leads to your next match….

Reed has a new chest protector, but before he can show it off, Jacob Fatu runs out and blindsides Injustice.  All the men just get into a big old donnybrook from the word “contra” and it’s all the ref’s can do to contain the carnage.  Reed does launch himself from the ring into a beautiful Swanton from the ring to the floor on Contra Unit.  While the refs try to get everyone out of the ring for some semblance of control, Reed gets Fatu in the ring and hits a super kick, while Oliver hits his Lost in the Sauce springboard cutter from the top rope.

Your Winners: No Contest, but call it a Moral Victory for Injustice

We now head to Alicia Atout from Filthy Island Control Central, with breaking news: Rocky Romero will be in action next week, as will Mauna Loa against Dominic Garrini, and Low Ki will face King Mo in the main event.  And if Filthy Island is everything it promises to be, then I will use this as an example why social distancing is very important.

De la Renta responds back to Vega’s earlier refusal, and says the offer will not be denied. So now, Vega will face Mil Muertes in an Azteca Jungle fight next week on Filthy Island.  It will be a Gift of the Gods, and I have to ask myself, “what in the name of Lucha Underground do AAA and MLW have planned?”  I guess we’ll have to wait, but let’s now appreciate this we get to your Main Event for the night…

During the entrances, Laredo Kid is focused, but Lio Rush is cocky as he steps through the ropes.  Match starts with quick moves, as both are evenly matched.  Rush ain’t liking this, so he steps out of the ring too re-center himself.  Back in and we get chain wrestling from both competitors as if they were using the Speed Force, but Laredo Kid gets the upper hand.  Still doesn’t like being showed up like this, so he goes out again to gather thoughts.  Laredo Kid wants Rush back in the ring, and so he chases Rush, and takes control back in the squared circle.  A sidewalk slam by the Kid gets just a one count.  Kid goes back on the offensive, with a tope rope move, but Rush catches him and Laredo Kid jams his arm on top rope, and finally Rush takes advantage.  Running clothesline by Rush for a quick cover, but only a two count.  Rush now turns it up a notch, and delivers a grounded kick to the back that makes Kid feel it, and he follows that up with a grounded European uppercut to the back of the neck.  Rush covers, but still gets a two count.

Rush goes for a suplex floatover cover that gets another two count.  Rush with another clothesline, but Laredo Kid rolls up Rush, and gets a two count.  Now stepping up, Laredo Kid goes for a cross body from up top that misses the mark, but Rush is right there to answer with an enzugiri, but it doesn’t completely knock down the AAA champ.  Now it’s a slugfest by both, but it’s the Kid that rocks the Moneyweight champion.  Kid on the offense with a running forearm into a Michinoku driver, then follows up with not one, but two moonsaults.  Kid for the cover, but gets a two count.  Laredo Kid is getting frustrated, and starts to focus on taking out the knee of Lio Rush even locking in a reverse figure four.  Rush crawls to the ropes to break hold, but the damage is beginning to take hold.  Kid then nails a jumping neckbreaker, and goes up top for a Swanton Bomb, but Rush rolls out of the way.  Kid goes after Rush, but I’m checking the watch and…yep, it’s to get this match over with, as Rush gets his bounce back stunner on the Kid, and it’s up top for the Final Hour frog splash that finds its target.  Lio Rush goes for the cover and pins Laredo for the one, two, and three.

After the match, Lio Rush celebrates with both titles, and tells people to get a watch that works.  Why?  Because it’s Rush hour! Always has. Always will be. And we fade to black while the Moneyweight is still celebrating.

Now that is a Main Event caliber match.  If the first three matches were appetizers, this with the main entrée.  This is what MLW should try to focus on in the future, because that’s where the money is, pun intended.  A solid matchup, and really does spotlight what the middleweight division can really do when given the opportunity

Next week, it’s Filthy Island, so get your sunblock ready until we see you in seven!