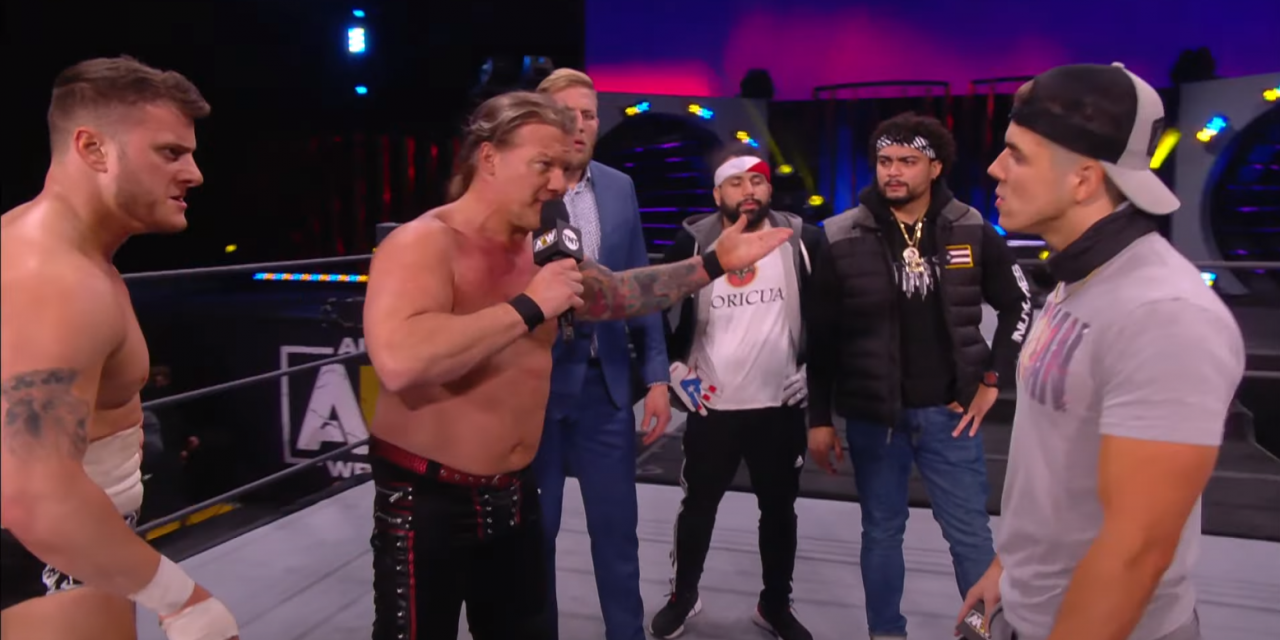 AEW has problem. Wrestlers from other promotions keep showing up on Dynamite. Sure, the guys from Impact are there at the behest of AEW champion Kenny Omega, but now, New Japan is getting in on the action. Last week, Kenta made a huge impact (pun intended) at the end of the show attack John Moxley. We shouldn’t be surprised though, as Mox is the IWGP champion.

Janela taunts Allin after a clean break in the corner. The two trade hammerlocks, with Allin then taking Janela to the mat in a show of technical wrestling. The Bad Boy knocks Allin to the floor, wiping him out with a suicide dive. Janela can’t get the pin after rolling Darby back into the ring. He goes up top, delivering a shot. Janela goes back to top, only to get caught by Allen.

Darby flips over Janela, drop kicking him into the corner. Allin goes for the coffin drop off the ropes, but Joey catches him; countering with a suplex. Allin strikes quickly, but Janela takes him down with a clothesline. The two trade near falls, reversing and countering each other pins. Janela drops Allin with a piledriver, but still can only manage a two count. He sets Darby up on the clothesline, but the champ counters with an avalanche Code Red. Janela kicks out of the pin. Allin takes down Joey with a hammer lock slam. The champ goes up top, delivering the coffin drop. Allen covers and gets the pin.

Moxley has a message for Kenta, tonight’s match is just for fun.

Sammy Guevera takes a camera with him into the Inner Circle locker room. He wants a word wit MJF, alone. Sammy knows what MJF is doing; he knows MJF wants to take over the Inner Circle. Maxwell thinks Sammy hates Chris Jericho, because he wants to be front and center. That sounds like some projecting to me. MJF tricks Sammy into saying he wants to take over and gets it on tape. Sammy smashes MJF’s phone and leaves him laying.

Lee Johnson hasn’t had a win in AEW in ever. Things don’t look good as Cody takes a between during the picture in picture break. Johnson hits Avalon witha  fisherman’s neck breaker, but Bononi breaks the pin. Cody intervenes, but is tossed to the floor. He then slams Johnson to the mat, before going out to take care of Cody. Avalon looks for the double knees, but Johnson evades. Lee rolls up Avalon and gets the three count.

After the match, the Nightmare Family congratulates Johnson on his first win. Lee thanks his trainers, calling the Rhodes family his family.

Earlier today, Dasha asks the Young Bucks about getting eliminated in the tag team battle Royal, when the Good Brothers roll up. They inadvertently costs the Bucks the match last week. The Brothers have beef with Private Party, not them. And the Bucks have issues with the Inner Circle.  The Young Bucks challenge Santana and Ortiz next week.

Dasha gets a word with Adam Page, who tries to deny that he is in a tag team with Matt Hardy, who runs in and wants to take Page to the bar. Adam is down, but runs into the Dark Order and things get awkward.

Pac is all over Nemeth, squashing him in the corner. He connects with a missile drop kick. Pac dominatesMiro  the match. He hits the Black Arrow before locking in the Brutalizer. Nemeth taps out.

Miro is not happy that Chuck Taylor betrayed him last week, but it’s really Orange Cassidy’s fault that the wedding was ruined. He is going to put them both in the hospital.

What did they think was going to happen? Of course, Orange was going to pop out of the wedding cake. Orange and Chuck toast to that.

MJF tells on Sammy to Chris Jericho for punching him in the ribs. Jericho has a match to worry about and will deal with this later.

Chris Jericho and MJF w/the Inner Circle vs. The Acclaimed

MJF does not take kindly to the Acclaimed’s rap as they make their entrance. MJF immediately rolls out of the ring at the bell, favoring his taped up, “injured” ribs. Jericho tags in and gets doubled teamed in the corner. MJF makes the tag and almost gets pinned.

Jericho helps MJF get leverage on Max Castor, by grabbing his hand. Bowen gets the tag and cleans house; sending MJF to the apron and dropping Jericho with a drop kick. He slams MJF to the canvas and then knocks Ortiz off the apron. Jericho hits a lionsault, but can’t get the pin. Bowens hits the Boom Box, but can’t get the pin. Bowen wipes out the Inner Circle on the floor, as Max stand a top the turnbuckle. Jake Hagar pushes him off to the mat. Jericho hits the Judas Effect and gets the win.

Sammy Guevara final makes his way to ringside. Jericho wants to know what is going on with him. Sammy drops a bomb. He is quitting the Inner Circle.  Sammy walks out.

After the commercial break, Alex Marvez asks Sammy why he quit. Sammy tells him he needs time away.

Adam Page and Matt Hardy are sharing a drink at the bar. Hardy wants to talk about their team up from last week. Hardy wants to make Page the number one wrestler in AEW and wants him to take a look at a contract. Page thinks Hardy is right, although he also may be drunk. Hardy got the contract signed and he has proof on tape.

Tony Schiavone brings out Sting and wants his thoughts on facing Team Taz. He can’t answer, as Taz interrupts. They have Darby Allin in a body bag and take off in a SUV, dragging him through the parking lot.

Alex Marvez caught up with Kenny Omega on the gold course. Omega makes a nice save out of the bunker. Marvez wants to know why Kenny is golfing and not preppy for his match. Omega knows what he doing; he can clear his head on the gold course. He won’t lose tonight, and he didn’t miss his gold shot. Although, I think he had some help.

Rosa slams Hirsch to the mat and hits a senton. Hirsch spring boards off the ropes and takes Rosa down with a head scissors. Leyla follows with a suicide dive. Back in the ring, Rosa fights off a cross arm breaker.

After the commercial break, Leyla with a German suplex. She follows with a cross body off the middle turnbuckle, but can’t get the three count. She goes up top again, but Rosa bocks the moonsault with her knees. Hirsch connects with a bicycle knee strike and goes up top again. This time she just whiffs on the moonsault, crashing to the mat. Rosa goes for the fire thunder driver, but Hirsh counters into a cross arm breaker. Rosa breaks free and hits another fire thunder driver and covers to get the win.

Tony Schiavone is with Jungle Boy, who has a message for FTR. He came out of his match with them a different man, he wanted to look FTR in the eyes. He didn’t want them to get suspended.

At the bell, Kenta cracks Moxley with his briefcase. He hits Archer with it, who shrugs it off. Unfortunately, when he turns around to face Kenta, Omega nails him with a chop block. Omega and Kenta double team Mox. A clothesline takes down Kenta, and I don’t think this match is going to stay in the ring much longer. Omega counters a powerbomb from Archer with a head scissors, sending him from the ring. Mox knocks Omega from the ring.

Mox blocks a GTS from Kenta, only to get clocked in the head with trash can by Omega. The trash can comes into play again on a moonsault by Omega. Archer re-enters the ring with a ladder. He takes down Omega and Kenta. Archer suplexes Omega into the ladder and we go to commercial.

After the break, the fights has moved to the arena floor. Kenta hits Pretty Peter Avalon with a GTS. Archer catches Omega trying to leap off the barricade and slams him onto the floor. Kenta breaks up the pin. Mox and Kenta fight into the seats and back into one of the arena kitchens. As long as no one sells a popcorn bag shot. Kenta with a DDT to Mox on a stainless steel table. Kenta locks in a cross face, only to have Archer break it up by throwing a case of potatoes at him. Well, at least raw potatoes a have some heft to them. Mox takes it up a notch, nailing Omega in the face with potato.

Omega and Moxley are now outside. Jon grabs a kendo stick and goes to work on Kenny. Jon goes to the middle rope, but jumps right into a knee strike. On the stage, Archer is beating on Kenta. Omega hits a V Trigger on Mox. Archer wants the announce team to clear the desk. Kenta blocks the power bomb and then hits the two footed stomp off the stage onto Moxley.

Archer calls out Omega and wants him in the ring. Kenny grabs the kendo stick, but Archer catches it. Omega goes for a ride with a choke slam. Archer takes Kenny for a rope walk and then hits a moonsault; it only nets a two count. Omega drops out of the black out and the Good Brothers hits the ring. Archer fights them off and then take down Kenta. Jack Robert takes down Karl Anderson, but Gallows take down Roberts.

Omega calls for the V Trigger on Roberts, but Mox cuts him down with a barb wired baseball bat. Kenta hits Moxley with the GTS.  Archer grabs Omega and Kenta, who kick him down south. The Good Brothers hit Archer with the Magic Killer. Omega with a V Trigger. The Good Brothers help Omega hit Archer with a one winged angel. Omega covers and gets the pin.

Dynamite was not must watch TV this evening. Sammy Guevara did drop a bombshell, but other than that the show was just meh. Thunder Rosa put on a great match, no surprise there. And check out the Falls Count Anywhere match, but it was far from the craziest match AEW has ever put on.