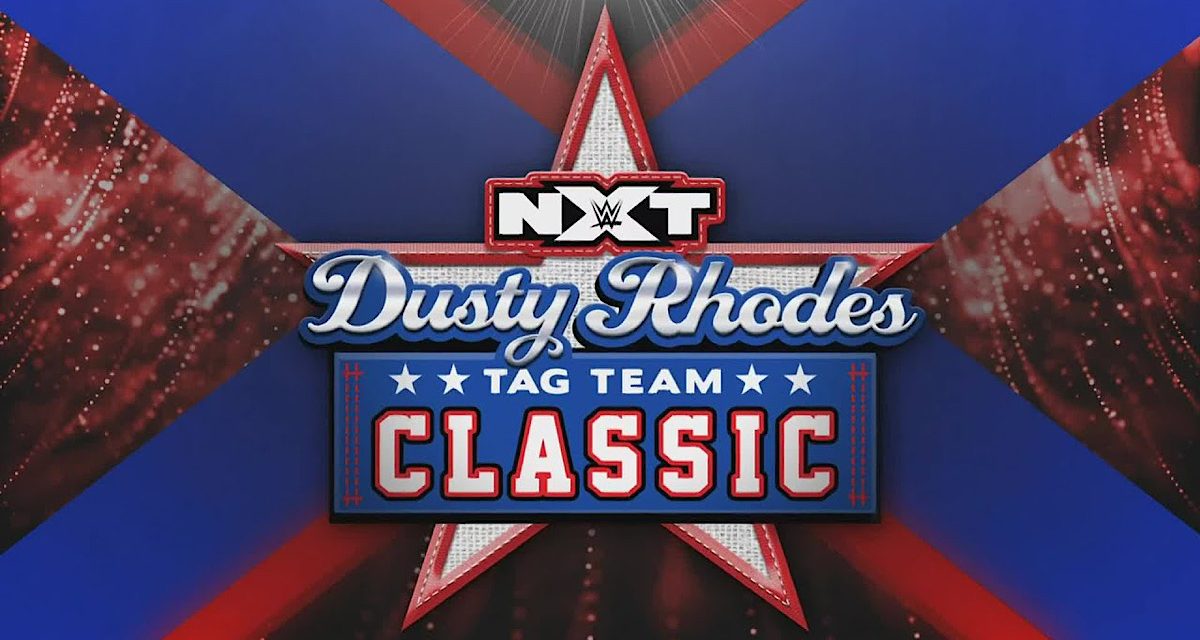 It’s become a sneaky tradition lately as NXT TakeOver is surprisingly just around the corner. This Sunday is NXT TakeOver: Vengeance Day, headlined by NXT Champion Finn Balor defending against Pete Dunne and NXT Women’s Champion Io Shirai defending against Mercedes Martinez and Toni Storm. Another staple in this upcoming card is two Dusty Rhodes Tag Team Classic finals, with the official matchups being revealed in tonight’s episode. However, neither the qualifying teams or names mentioned above could outshine the returning Cameron Grimes who appeared with both literal and figurative money — even some stocks and cryptocurrency too, because he’s going to the moon!

All four competitors are great high-flyers, but the opening minutes refreshingly showcase some technical action with LDF’s Joaquin Wilde especially impressing. The usual offense eventually breaks loose, as both teams match up pretty evenly. MSK’s Wes Lee makes the comeback with a tope-con-hilo but gets caught with Wilde’s Frankensteiner. Then, for the most insanely eye-catching maneuver in some time, Wilde dives off MSK’s Nash Carter, who’s hoisted onto Raul Mendoza’s shoulders, and delivers a 450 splash in one trip down. But Lee regroups with a superkick, thereafter hitting the double-team finisher for the victory. MSK advances to the Dusty Cup finals in their best NXT match to date. It should be noted though, Wilde is wildly underrated and showed it here tonight.

A video package for Mercedes Martinez builds her for Sunday’s triple-threat championship matchup, also subtly explaining why she left Retribution.

Before the matchup begins, Li and Boa make their cinematic entrance accompanied by the mysterious Tian Sha and are halted by concerned companions Kayden Carter and Kacy Catanzaro. The duo is worried for Li, although Catazaro hasn’t kept her co-workers’ best interests in mind lately anyhow. Li delivers the Tornado Kick and gains the quick victory, but after getting signals from Sha though, she continues the beatdown. Carter approaches the throned Sha before Li throws her off stage. Sha chokes out Boa with one hand, continuing this increasingly bizarre angle with no clear endgame.

Johnny Gargano is wheeled out and wearing a sling, carried by Austin Theory into the ring. The North American Champion cannot walk due to an unfortunate arm injury caused by Kushida, therefore cancelling their upcoming TakeOver bout. Gargano claims that he suffered four fractures and says Kushida should be suspended indefinitely. Out comes Regal to object, and shortly after, Kushida quietly appears behind The Way for a comical sneak attack. Gargano blows his cover and takes a Bret Hart wheelchair bump before commercial.

Blackheart and Moon take control before Hartwell initiates the tide change in uneventful fashion. Moon eventually hits the comeback, but LeRae reverses with an outside Hurricanrana. After another few minutes of heat, Blackheart makes the second comeback, once again foiled by LeRae who suicide dives the oppostion. She stomps Blackheart for two but gets caught by Moon’s Eclipse. Hartwell sacrifices herself under Blackheart’s senton which ultimately finishes things off. This matchup attempted to be epic, but showed delusions of grandeur.

The finals are set, Blackheart and Moon face Raquel Gonzalez and Dakota Kai at TakeOver. And announced by Mr. Regal, the winners will be rewarded with a Women’s Tag Team Championship match.

Timothy Thatcher and Tommaso Ciampa call out Grizzled Young Veterans and pledge to win Dusty Cup ‘21. These guys have some commendable aesthetic.

Legado Del Fantasma meets with Santos Escobar and apologizes for losing the opening match. But Escobar doesn’t mind, instead insisting on paying “someone a visit”. He’s practically sending them into the lion’s den.

Johnny Gargano makes an early distraction, still wearing a sling, as Theory delivers a fantastic dropkick. Kushida recuperates and targets his opponent’s arms with additional strikes before getting knocked off the apron preceding commercial. Theory softens him up but proves ineffective against Kushida’s comeback that takes them ringside. Kushida applies an armbar across the apron, but a revived Gargano superkicks him, ending this bout in disqualification. The Way attempts to beatdown Kushida, but Dexter Lumis pulls Theory into the abyss (under the apron). He finally escapes but cannot escape the double submissions of Kushida and Lumis.

Toni Storm reminds Io Shirai that she defeated her in 2018’s Mae Young Classic and will defeat her once again on Sunday. Not unless Mercedes Martinez keeps to herself.

Imperium is returning soon, whenever that may be. An injection of Walter matches can’t come soon enough.

Pulling up inside a white Lamborghini is Cameron Grimes! He’s paying people off in crisp Benjamins and wearing a brand-new brown outfit. And now, it’s become unbelievably clear where this headed… they’re actually doing it: “I walked into Gamestop… and I thought, ‘If there was anything that Cameron Grimes would put his money in, it would be a fine establishment like Gamestop.’… It went parabolic! But in layman’s terms, it went to the moon!” Grimes jumps around ecstatically about how rich he has become, ultimately telling William Regal to kiss his grit. Words cannot do this segment justice; it’s a must-watch!

A contrast of charisma, Johnny Gargano cuts a backstage promo about his upcoming title match on Sunday. But it hasn’t correlated with his in-ring abilities, reminding everybody that he’s still Mr. Takeover.

Zack Gibson tells Thatcher and Ciampa to stick their fake friendship up their arses, and clearly he’s struck a nerve. The competitors brawl around the ringside area before the matchup officially begins with Thatcher gaining control. James Drake takes out Ciampa with an apron powerbomb, and GYV starts working down the opposition during commercial. Thatcher is all alone but inevitably tags in the recuperated Ciampa who makes the explosive comeback. He’s overtaken by GYV, takes a Doomsday Device for two, and finally succumbs to the Ticket to Mayhem finisher. NXT TakeOver’s Dusty Rhodes Tag Team Classic finals match is officially set: Grizzled Young Veterans vs. MSK.

Commentary sends the show off air, taking us through Sunday’s full lineup. Finn Balor squares with Pete Dunne inside the ring before clashing at Vengeance Day!

Pretty decent go-home show considering the bigger matches were built with packages and staredowns. Besides the squash, all matches were solid, especially the two men’s Dusty Cup bouts. But undoubtedly in my mind, the returning Cameron Grimes stole this entire episode.