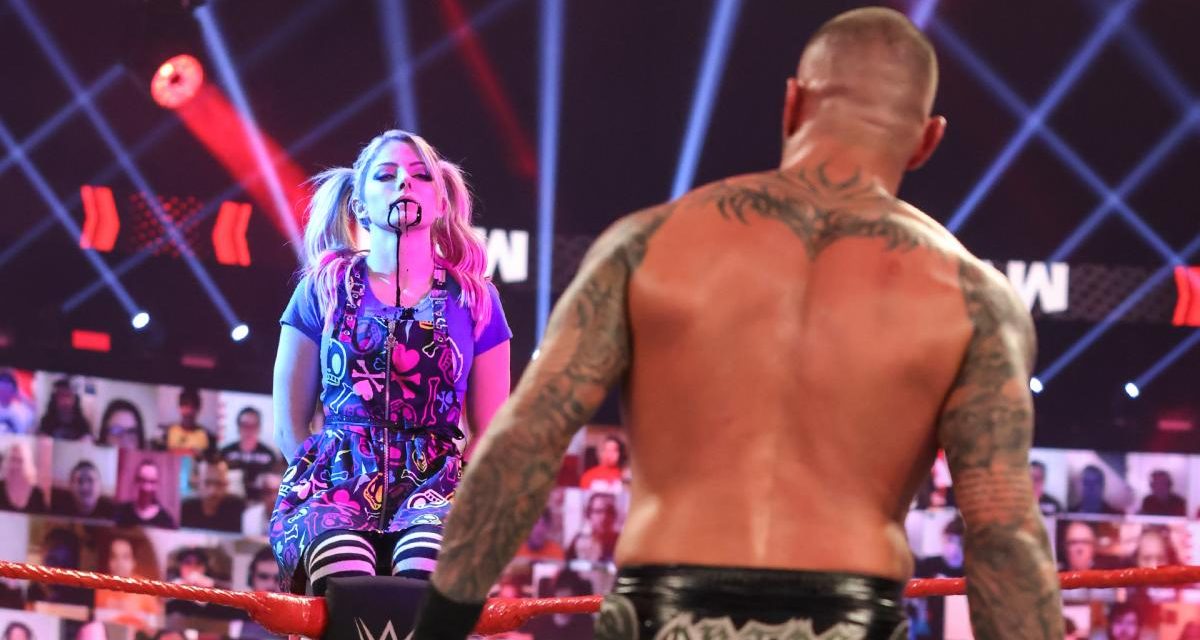 We are officially on the road to WrestleMania with the Royal Rumble in the books. Not only did Edge return last night, he won men’s Rumble match; will he officially challenge WWE champion Drew McIntyre, tonight? Or will he still have to deal with Randy Orton, who he eliminated to win the match. We also have new WWE Women’s tag team champs; Nia Jax and Shayna Baszler recaptured the belts with a big helping fist from Lacey Evans. Surprisingly, the Fiend was nowhere to be seen and Alexa Bliss only lasted one minute in the Rumble match. Lets head into the ThunderDome for the fallout.

Oh yea, Drew McIntyre easily dispatched Goldberg last night. The champ holds court in the ring, giving his thoughts on the Royal Rumble. Predictably, he is interrupted by Edge, who has to be blunt with the champ. He can’t believe Drew doesn’t view him as a threat. Sheamus comes out to congratulate Edge, but he isn’t happy about Edge questioning Drew. McIntyre backs Sheamus off and wants Edge to make a decision, or he will do it for him. Edge wants to assess the situation, but who ever he choose he will win. Edge leaves as Drew watches him. He should have kept his eyes on Sheamus, who drops him with a Brogue kick.

Backstage, Sheamus tells Charly Caruso he is tired of being known as Drew McIntyre’s friend and he wants the WWE title.

Riddle tries to catch Lashley off guard, but the champ is ready and absolutely mauls him. He drops Riddle with a stalling suplex, but gets dumped over the top rope with a head scissors. Riddle with a floating bro and tosses Lashley back into the ring. The champ gets Riddle in the Hurt Lock in the ropes. The ref starts to count, but Lashley keeps the hold on. The ref calls for the bell.

After the bell, Lashley applies the Hurt Lock again. MVP can’t talk him down. He eventually tosses Riddle into the barricade.

Bad Bunny is in the house and he has arrived in style.

Riddle is still be attended to at ringside, but he wants to get his hands on Lashley.

Randy Orton didn’t think it was possible for Edge to return to the ring. He congratulates him on winning, but Orton isn’t pleased that Edge made him a liar by coming back. Orton sent Edge home for a reason, so now he is going to stop him from headlining WrestleMania. There will be no mercy or compassion, tonight.

Xavier Woods is so happy Kofi Kingston is back. Kofi thinks Ali has lost him mind, but tonight is about Woods getting payback.

Woods tosses Ali over the top rope to the floor. Woods misses on the pescado and has to fend off Slapjack and T-Bar. Ali hits him with a neck breaker getting back into the ring. Ali bounces Woods off the turnbuckle and follows with another neck breaker. Woods ducks multiple clothesline attempts and hits a leg sweep. Woods blocks a tornado DDT and answers with a discuss clothesline. T-Bar breaks up the pin. Kofi launches himself off T-Bar and into Slapjack. Ali rolls up Woods, but Xavier reverses the pin and is able to get the three count.

Bad Bunny is hanging out with Damien Priest. I guess Priest got the call up?

Bad Bunny made a splash last night, literally, hitting Miz and Morrison with a flying cross body after they were eliminated by Damien Priest. See, Miz felt Bunny dissed him earlier in the night, so Miz destroyed his DJ set up.

Bunny joins Miz and Morrison in the ring. Miz makes an apology, but Bad Bunny has nothing to say. Miz knows Bunny’s dream is to be a WWE Superstar and they offer to teach him. In return, they want his help in recording an album. Morrison and Miz lay down a track. Bunny is not impressed. Miz goes off on Bunny, who tells him to relax. Bunny is here because his friend wanted to be on Miz TV. That friend, Damien Priest.

Priest makes an impact, wiping out Miz with a big right.

A standing round kick sends Miz to the floor. Priest flies over the top rope, taking out Miz and Morrison on the floor. Bunny loves it from commentary. In the ring, Miz drives Priest shoulder first into the ring post. Miz celebrates a clothesline in the corner and follows up with a double axe handle from the turnbuckle. Miz stares down Bad Bunny as he delivers a beating to Priest. Miz has a kick blocked and Priest takes him down with a clothesline. Priest splashes Miz in the corner and delivers the Broken Arrow. Miz kicks out at two.

Priest looks to finish Miz, when Morrison jumps to the apron. The distraction allows Miz to connect with a kick. Morriosn distracts the ref, so Miz can grab the briefcase. Bunny gets to it first. Morrison steps to Bad Bunny, who clocks him with a microphone. In the ring, Priest hits Miz with the Reckoning. He covers and gets the pin.

MVP joins commentary, fending off questions about Lashley’s actions earlier in the night. Benjamin knocks Lince Dorado to the mat. Benjamin dodges a moonsault, as Gran Metalik tags in. Benjamin catches Metalik coming off the top rope, dropping him with an Olympic Slam. Lucha House Party knock the champs off the apron. Metalik takes down Alexander with an arm drag after bouncing off the top rope. Benjamin is taken out on the floor by Dorado. Cedric takes a senton in the ring, but Benjamin is able to break up the pin. Dorado is kicked off the top turnbuckle. Cedric with a knee to Metalik, but Benjamin tags himself in. Shelton hit Pay Dirt and covers to get the win.

Back in gorilla, Sarah Schreiber asks Flair about Lacey Evans interfering in the tag team match. Flair won’t play games with Lacey and is upset that she let Asuka down. Asuka knows they would have won if Evans didn’t interfere.

The winner of this match will receive a title match. Earlier today, Lana and Naomi explain why they are partnering up. Naomi takes it to Flair, hitting a kick from off the ropes. Lana tags in, hitting Charlotte in the back with double knees. The match breaks down with everyone hitting a move, until Lacey Evans and Ric Flair walk out on stage. Flair tags out and Asuka is confused. Naomi hits her with the Rear View and covers to get the win.

Winners via pinfall: Naomi and Lana

Charly Caruso asks Drew McIntyre how he is feeling after the last 24 hours. The champ is proud to take on Edge, but this time things are different with Sheamus. He isn’t ready to throw away 20 years of friendship over the WWE title. If he wants a match, he has one.

Elias and Jaxson Ryker vs. Jeff Hardy and Carlito

Hardy with a drop kick and elbow drops to Ryker. He kicks out at one. Elias tags in. Ryker grabs Hardy’s towel, allowing Elias to nail Jeff in the back. Elias hits Carlito with a cheap shot, allowing Jaxson to isolate Hardy in the corner. Elias with a sit out chokeslam, but he can’t get the pin. Hardy rolls away from a diving head butt and Ryker eats canvas. Carlito gets the hot tag, hitting a running knee and a drop kick. Elias nearly gets a roll up pin. Carlito hits the back stabber. Hardy tags in, hitting the swanton bomb. He covers and gets the win.

Edge is super ecstatic that he won the Royal Rumble, but there is always a black cloud hanging over him. If you didn’t guess, that black cloud is Randy Orton. Edge calls out Orton for possibly faking a knee injury last night. He calls out Orton for being jealous. Edge accepts Orton’s offer, so he can get out from under that cloud. This ends tonight. (With some help from the Fiend?)

After the break, Edge gives Damien Priest some rub.

Alexa dodges a charging Cross, who asks Bliss what she wants from her. Cross wants to fight. The two lock up. Cross with a head lock takedown. Bliss fixes her hair. Nikki keeps the pressure on with a cross body and a snap suplex. Bliss fights back, flooring her with a right hand. Alexa with a low drop kick and then plays some imaginary hop scotch. She ends up kicking Cross in the ribs. Alexa sets up for the Sister Abigail, but pauses, thinking about the mandible claw. Cross fights out and beats Alexa into the corner. Bliss’s music hits and now she is in her old ring gear, from when they were tag team champions.  Cross is freaked out, but that doesn’t stop her. Bliss changes back to the Funhouse look. Nikki charges, but is taken down. Bliss hits Sister Abigail with her own flair. She covers to get the win.

Alexa makes her way up the ramp, as Randy Orton makes his entrance. He doesn’t even look at her.

Edge fires out of the corner with a cross body. He connects with a knee strike and covers. Orton kicks out. Edge tries to lock in Anti-venom; Orton is able to counter, slamming Edge to the mat. Orton knees and stomps Edge in the corner. Edge hits the Edge-acution, but can’t get the pin. Orton counters a spear with a power slam. He slams Edge into the ring post, sending him to the floor. Orton whips Edge into the stairs and we go to commercial.

After the break, Orton is picking apart Edge, setting him on the top turnbuckle. Edge fights Orton off, sending him to the mat. He drops Orton with a flying forearm. Edge blocks an RKO, countering with the Edge-o-Matic. Orton retreats to the apron, so Edge knocks him into the security barrier. He rolls Orton into the ring, but the Viper rolls back out. Orton with a thumb to the eye and slams Edge onto the announce desk. Back in the ring, Orton stalks Edge; catapulting him into the bottom rope. He drops Edge with the draping DDT. Orton pounds the mat, looking for the RKO. Alexa Bliss appears atop the turnbuckle with blood spilling out of her mouth. Edge spears the rightfully freaked out Orton. He covers and gets the win.

That’s the show. See you next week in the ThunderDome.

A solid, if not spectacular, RAW to follow up the Royal Rumble. This should mark the end of the Edge/Orton feud, but Orton still has his hands full with Alexa Bliss and the specter of the Fiend. Edge will take on Drew McIntyre at WrestleMania after winning the Rumble, unless Sheamus beats Drew first. The Hurt Business keeps rolling, which isn’t a bad thing. Damien Priest has officially been called up, helping out Bad Bunny, who extended his stay one more night.