NXT: O’Reilly and Balor join forces, stand above the rest 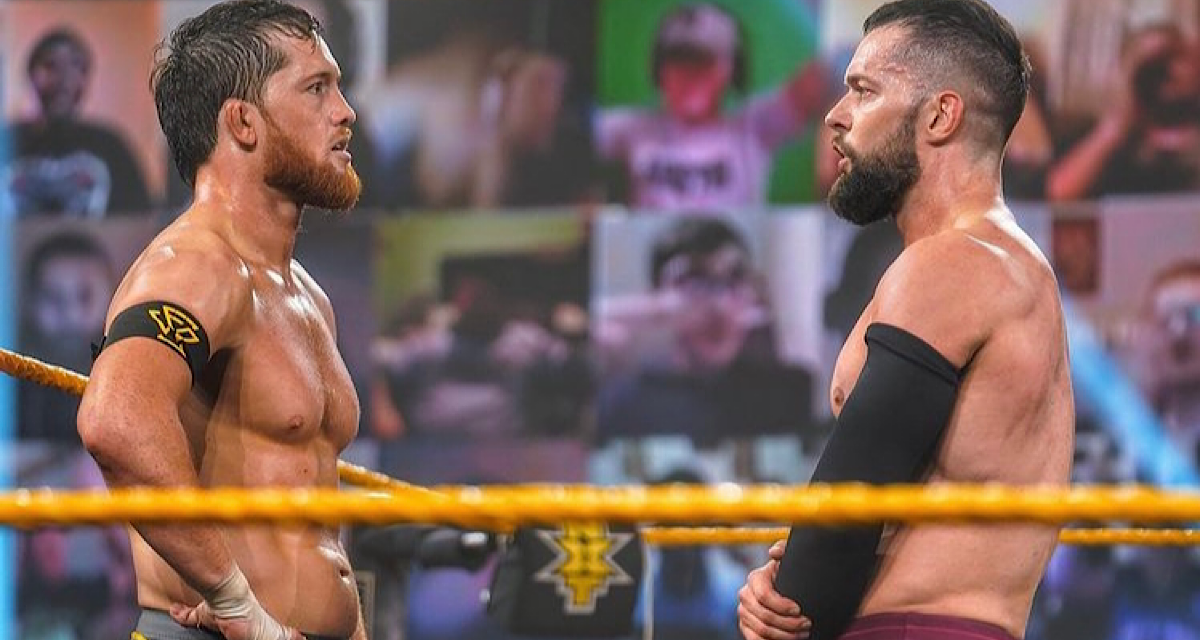 Heading into February, you already know the drill; the NXT Dusty Rhodes Tag Team Classic tournament continues with more two-on-two action. Tonight’s episode closed with another tag bout, however this exhibition put all tourney matches on notice; NXT Champion Finn Balor and Kyle O’Reilly stepped up against NXT Tag Team Champions Oney Lorcan and Danny Burch. The current yellow brand cards are obviously tag-heavy, and having more matchups similar to this showing would definitely behoove them.

After Nash Carter eventually gains control over Maverick, partner Dain receives the hot-tag and ransacks the opposition. Considering MSK is brand new, this choice of matchup wasn’t too logical for promoting their strengths, and they’re apparently the antagonists here against the cheeky oddball couple. The pace quickens in the final minutes as Carter makes the comeback, and with partner Wes Lee, delivers the finishing double maneuver on Maverick for three. Majority was seemingly picture-in-picture, but MSK showed some potential during this opener.

A sit-down interview with 205 Live’s Curt Stallion gives the Cruiserweight challenger some background. “The Lone Star” is somewhat reminiscent of one young Matthew McConaughey… just a little.

With Robert Stone standing ringside, the Brand’s new tandem takes control over Kai. However, Gonzalez steps in, and the latter team dominates. She halts an attempted comeback with a closeline and slams Kamea down for three. They’ll face Kacy Catanzaro and Kayden Carter next week and presumably advance into the Dusty Cup finals. Tonight once again proved that Gonzalez rules the women’s division.

The Way is interviewed backstage, but when asked about Kushida, North American Champion Johnny Gargano loses his cool. From behind the curtain appears Dexter Lumis who stands there — menacingly.

A cameo from “Captain Marvel” Brie Larson promotes her YouTube workout video with NXT’s Tegan Nox. They should definitely focus on knee strength!

Rust was smashed by Bronson Reed last week, and tonight the subsequent effects are lingering. He’s starting back from bottom again against an unnamed enhancement talent, handpicked by Bivens. Enhancement talent dude delivers some actual offense and catches a guillotine, but Rust’s double armbar finishes him off. Bivens and Rust take an in-ring selfie after their oh-so big victory.

GYV cuts another preceding promo, this time targeting their present opponents. They boast 15 combined years of experience — which is probably less than Kushida alone. Ruff Hour gains control though with Ruff’s athletic tight-rope offense before commercial, and Kushida makes a comeback afterwards, even kicking out from a Doomsday Device. However, it’s Ruff who succumbs to GYV’s Ticket to Mayhem finisher for three. They advance into the semi-finals of Dusty Cup ‘21. Johnny Gargano and Austin Theory run out and initiate the post-match beatdown, but Dexter Lumis makes the save — rather, stands there menacingly.

Cameras cut to “Lone Star” Curt Stallion who’s downed backstage. He accuses Legado Del Fantasma of blinsiding him as commentary and officials hilariously act like there has been a murder.

Even General Manager William Regal is heated as tonight’s Cruiserweight Championship match is now postponed. Inside their locker room, the faction gets chewed out, but also mysteriously finds Scarlett’s playing card since Santos Escobar called out Karrion Kross last week.

Toni Storm, the woman previously pinned by 95-pound Kacy Catanzaro, now wants NXT Women’s Champion Io Shirai. The champion and challenger brawl with Shirai getting the upper-hand, but from behind is Mercedes Martinez. She and Storm divide themselves over the belt with the latter standing tall.

A vignette of Imperium reinstates their dominance, of course now united following travel issues supposedly. Lest we forget, Walter still oversees the operation no matter the country.

The Undisputed ERA’s Adam Cole and Roderick Strong are interviewed about next week’s Dusty Cup matchup against Tommaso Ciampa and Timothy Thatcher. They are confident, they are experienced, and that is undisputed. You know the rest!

Despite the weird gimmick change, “Swerve” is still smooth and calculated, even when spike-selling himself onto the apron. Outside, 330-pound Reed hits a legitimate suicide dive before break, but his opponent gains control by targeting the right arm. Scott connects with a 450 and is returned by a headbutt. Climbing up top, Reed delivers the Tsunami Splash for three. Here’s another match burdened by commercial, a pretty good one too unfortunately.

Former rivals turned tag-team partners Tommaso Ciampa and Timothy Thatcher are ready for war against Undisputed ERA next week in Dusty Cup ‘21. Together in a backstage promo, the newly-formed tandem looks tough as nails.

Just from movements and composure alone amidst the opening chain-wrestling sequences, these four guys — specifically the former team — are top-notch talents. They’re a well-oiled machine before break, but Lorcan and Burch suffocate the momentum. Working down on Balor jogs the memory, and surprise; these guys are actually still the NXT Tag Team Champions, finally wrestling a two-on-two matchup after seemingly forever. After Balor eventually hits the Pele Kick and Slingblade, O’Reilly receives the fiery hot tag, using his stiff strikes to decimate Burch. He reverses Burch’s aerial maneuver with a kneebar for the decisive submission victory!

Before the celebration begins, Pete Dunne attacks Balor from behind, and numbers take control as the champion’s fingers are snapped. Undisputed ERA makes the late save, exchanging a moment of respect with Balor.

Pretty decent show tonight and undoubtedly an improvement from last week. Whenever the Undisputed ERA boys and Finn Balor close the show it’s like a nice dessert. Regarding the rest, the Dusty Rhodes Tag Team Classic continues, and the middle card is the middle card. Nothing much to decipher here, although the upcoming men’s tournament matches should be great.