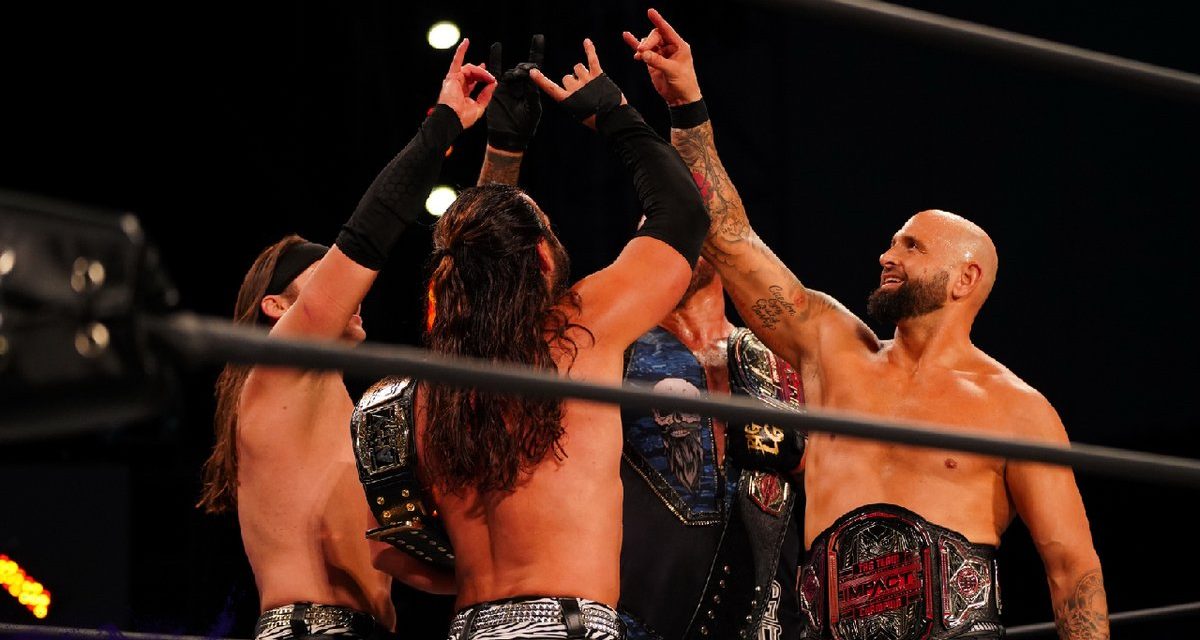 Most weeks I’ve written about pro wrestling for Slam Wrestling, I’ve sat here and thought about how wild it is that I get paid to do it. This week, all I can ponder is why I never picked up any shares of Gamestop when it was less than $5. Ah well, life goes on, and in this case, it goes on with a cross-promotional team-up for a big eight-man main event. Let’s get going to TNT, as AEW Dynamite is live once again.

One of Kingston’s endearing qualities is taking big bumps, but he takes a hard landing on his hip on the floor that makes one think that maybe that’s not the safest line of work. Archer is just toying with him for the most part, as he enjoys doing. But Archer’s tactical error may be sending Jake Roberts to the back, because Kingston has family. Butcher and Blade haul a beaten up Roberts out to the stage, while Bunny slips the Mad King some brass knuckles. With the ref otherwise occupied, a metal-enhanced backhand by Archer leaves the big man easy prey for the three count. As Scott Hall might say, one more for the bad guys.

Jon Moxley seems to be a little confused about how Kenny Omega, the Young Bucks and Good Brothers are going to get along, never mind the shifting alliances that are confined to AEW. But Mox is down for some gang warfare at Beach Break. Don’t blink.

Did you know Sting is actually going to participate in a Street Fight at Revolution? I’ll believe it when I see it, but I’m pumped. He and Darby Allin have a message for Brian Cage and Ricky Starks, one that involves breaking some windows. Someone go grab Darby’s skateboard from wherever it landed, please.

It bothers me a lot that it’s not ‘Varsity Blondes.’ Why do you hate the letter ‘e,’ AEW? What did it ever do to you? Is it just its ubiquitous nature that bothers you? It’s not lost on the announce team that Sammy Guevara is cheering when MJF gets kicked, so that intra-faction tension is not over yet. The match comes to an abrupt end when Brian Pillman Jr. leaps into the Judas Effect, so Jericho’s Lionsault is completely unnecessary but still impressive for a man of his age.

Pac videos are the best. Like I just want to be around when he shoots one, like tonight’s addressing Kenneth Omega.

Did … did Shaq just throw down a challenge to Cody Rhodes for March? Takes me back to Karl Malone and Dennis Rodman. Look it up on YouTube, kids.

Speaking of Cody, he hits the ring with Arn Anderson to field questions from Tony Schiavone. Does he want to respond to Shaq or Jade Redmond? He sounds like it was going to be himself and Brandi against Shaq and Jade, but that’s not possible with Baby Rhodes on the way. Cody defers to Coach Arn to help him decide what he should do, which turns into a bit of a sales pitch to accept Red Velvet as his partner. For her part, Red Velvet is fed up for both herself and Brandi. Sounds like the ball is in Shaq and Jade’s court now, and that’s not even really a basketball pun.

This is the Dynamite debut for the Hollywood Hunk, who at the very least looks the part. “Why does he look like Billy Gunn?” my son says. “Is he supposed to be? Or Dolph Ziggler?” Good observations. Also, Big Money Matt Hardy is ringside cheering on Page, undoubtedly hoping to sign him to the Hardy Brand. Hangman wins, of course.

Schiavone returns to the ring to get a word with Page and Hardy, who says he is concerned about Hangman and the way he was burnt by the Bucks and Omega. Hardy claims he doesn’t want anything from Page, but he’s a good person and he deserves to be happy. He also says Adam is welcome to dress in Hardy’s huge dressing room, where there’s plenty of space, no strings attached.

Luchasaurus is handcuffed to both Wheeler and Blanchard, supposedly to avoid interference from Harwood’s running buddies. It works for a while and gives us the sweet, sweet in-ring action you’d want to see. Picture in picture? Well, that’s not as sweet. Honestly, Jungle Boy has had a push as a singles performer already, so the real treat is seeing Harwood given this kind of spotlight. “Who’s going to win this damn thing?” exclaims Schiavone in the midst of about 20 near falls. Eventually, Jungle Boy maneuvers Harwood into the Snare Trap, and he gets the tap out.

The triumph is short-lived, as Wheeler and Blanchard escape their cuffs and lay waste to Jurassic Express, handcuffing Luchasuarus to the ropes and cutting the horns off his mask. They zero in on Jungle Boy’s hair, but Marko, Top Flight and SCU storm the ring to drive off the heels.

Before Taz can cut his promo, his team sees a stand selling Sting and Allin merch and starts beating up the poor dudes working there. I have so many questions about this, but they’ll have to wait for now.

We’ve not seen Shanna on Dynamite in a while, but she’s solid enough that taking the Doctor into a longer match doesn’t seem like too much of a stretch. But she’s headed for a loss here, and it comes by way of the Lockjaw.

Baker continues to assault Shanna after the bell, so the only question is whether someone will arrive to stop her. Someone does, in fact, and that someone is Thunder Rosa. Baker and Rebel sprint out of the ringside area, wanting no part of Rosa.

In the back, MJF continues his hunt for Guevara. He tells Sammy that he told Wardlow not to get involved in the match last week, but Guevara isn’t buying it and says he knows exactly what MJF is up to. They have a brief, pro wrestling staredown from about an inch apart before MJF storms off.

It’s been five years since the Good Brothers and Young Bucks have teamed together, and there’s probably a verbal barrage coming from Tama Tonga after Karl Anderson calls it a full-fledged Bullet Club party. Omega and Don Callis stop by, which immediately causes some tension right before they head to the ring.

“Who would have thought a year ago that Dark Order would be the home team in AEW?” Excalibur muses. It’s true, and while the tragic passing of Brodie Lee is a factor, the truth is that the transformation of the group’s image was already underway once the powers that be let Silver and Reynolds loose. The Bucks and the Good Brothers seem to be on the same page early, but smart money suggests that won’t hold up. The Dark Order has its moments in the middle of the match, and surprisingly to me, the Bullet Club alliance holds up long enough for a Meltzer Driver to win the day.

After the match, Matt Jackson mentions that they will be in the tag team battle royal next week, which gets the winner a title shot. If they win, though, they can hand pick their opponents for Revolution. Rey Fenix makes perhaps the most exciting run-in in recent memory, and just as things start looking bad for him, Moxley comes to his aid, planting Omega with a Paradigm Shift when the AEW champ tries to intervene. We’re out of time for now, but Beach Break looms next week. See you in seven!

While still running in place a bit ahead of Beach Break, this week’s show had something last week didn’t: the excellent match between Jungle Boy and Dax Harwood. A friend and former colleague tweeted “Jungle Boy is gonna be a massive, massive star” after that one, and I’d say he’s probably correct. Beach Break should be fun, so let’s hope the next week passes quickly.