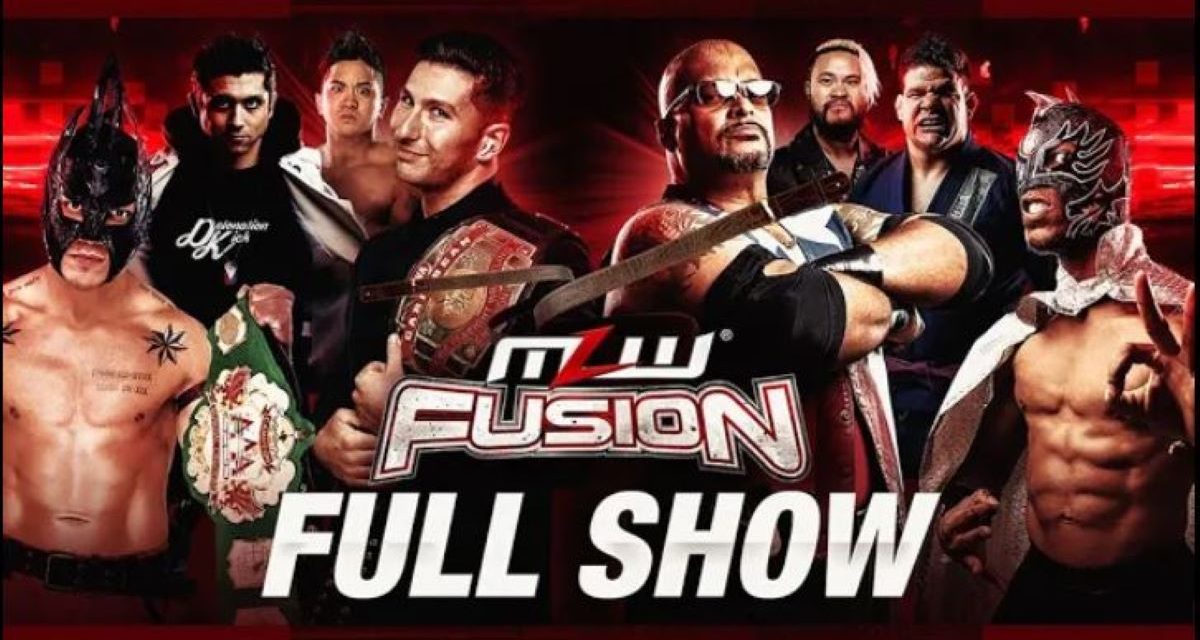 Savio Vega has the opportunity to reclaim the IWA Caribbean Championship that Richard Holliday stole from him last year, and a Caribbean Strap match will be the way to do it; the same strap that Vega once used on “Stone Cold” Steve Austin.  We go to a cold open that highlights the feud between Richard Holliday and the Boricuan Brawler:

As much as I want to make a joke about straps, I gotta remember this is a “family-friendly” adjacent recap, and I don’t have an OnlyFans page set up.  Plus, one false comment, and I’ll get lumped in with Armie Hammer.  Best to leave the straps jokes to the hacks, as it is not dignified for a Lucid Luchador like myself.

In any case, live from the GILT Nightclub in Orlando, FL.  Your commentators Rich Bocchini and Jared St. Laurent have the call so let’s start the show.

Well, we would start the show but Contra Unit “interrupts the feed” and Josef Samael ain’t having it. He lets us know he has soldiers lurking in every dark corner. Samael puts over Daivari being reborn under the black flag of Contra Unit, and he promises they won’t get embarrassed again by the likes  of injustice.  So…that’s a thing, I suppose.

And back to the ring.  I have to say, it’s very smoky in the arena. Curious what their ventilation is like.  But let’s go to your…

Watching cruiserweight action like this match and recapping it is always tough to see all the moves that happen, but let us bless the power of the DVD and pausing to really take in the action, otherwise it’s “blink and you miss it”.  It’s like trying to wrangle cats or figuring out what happens in the movie TENET (seriously, did *anyone* follow the plot of that movie?!).   Bocchini really puts over how wrestling promotions work together to set up matches like this, and I do agree.  Not everything needs to be centered on one wrestling universe.

Handshake of respect to start between the competitors.  Nice chain wrestling by both wrestlers, and both are evenly matched.  Zenshi ramps up offense with a tilt-a-whirl body slam to a low dropkick that knocks out kid and slingshot to ropes to hit a Pele-style kick.  Move of the night is by Zenshi who uses the ropes to balance himself upside down, and as Laredo gets close, Zenshi then twists his body and then uses the momentum to do a variation of a Tiger Feint Kick.  If Rey Mysterio has the “619”, then I’ll call this the “+56” in honor of Zenshi’s native Chile.

Your Winner via Pinfall:  Laredo Kid

After the match, Laredo Kid says he is the best cruiserweight in the world and has proved it in AAA, and he wants Lio Rush’s MLW Middleweight Championship.  Honestly, that would be a money matchup when that happens, but until then, seek this match with Zenshi and Laredo Kid.  It was a nonstop match from bell to bell.

Myron Reed delivers a promo, and says to Contra Unit that they poked the bear. He’s now stronger, and he thanks Contra unit for starting the evolution of Myron Reed, and he will gets justice soon.

We now go to the  MLW Top Ten List (sponsored by Pro Wrestling Illustrated), showing once again who’s in line for the MLW Heavyweight Championship.  St. Laurent notes that L.A. Park will be removed since he is now solely focused on the tag team belts he and his sons won against the Von Erichs (according to a note sent by Promociones Dorado), so we get a shakeup in the rankings, and they are:

7. Mil Muertes (after picking up the win against Brian Pillman, Jr.)

We get a recap of the Von Erichs tag team loss to Los Parks due to the “filthy screw job” of Salina de la Renta on the outside, and the (and I use the term loosely) refereeing style of Tom Lawlor.  So the Von Erichs are in Hawaii to regroup and we get the patriarch himself, Kevin Von Erich, dispensing some good fatherly advice to his sons:

Los Parks cut a promo, thanking the new owner of Promociones Dorado for the opportunity to get the tag team gold.  Folks, I’m here to tell you that it is important to be bilingual, because there is nothing funnier than Los Parks cussing out Violence is Forever and TJP/Bu Ku Dao, calling them “hairless Thai boys”, and wished them good luck once they come up against, “The best team and the potent family in the game.” Ha!

“Moments ago”, we get “El Intocable” Gino Medina drive up, and he tells the cameraman he will be at ringside. You see, kids, Medina was once part of The Dynasty until he decided to leave (or Holliday kicked him out, depending on who you believe), but now he wants to see that “Culero” Holliday gets whipped tonight.

Tom Lawlor claims innocence from last week, stating he had nothing to do with ACH getting jumped, but ACH just does not have what it takes, in Lawlor’s humble opinion. Time people learned their lesson, just like the Von Erichs did.  But now it is time for…

Couple of firsts, as this will be Kevin Ku’s in action debut, be worth seeing, as is the same with Dao.  Dao, it is noted by commentary, is fighting out of Vietnam, but makes home in New Orleans, and TJP has had a history wrestling for MLW, and Dao studied under TJP.  Very curious to see how this goes.  Dao and Garrini start off, and Garrini gets in with some great MMA grappling moves, like a head triangle on Dao, and then drags Dao in to his corner for a tag.  Once Kevin Ku takes over, Dao counters to a huracarrana into a front chancery then a snap suplex to his corner to tag in TJP.  TJP handles Ku and tries to set him up into Octopus to a pinning situation, but gets a two count.  TJP tags back Dao, hits Ku with an assisted slam, only gets a two count.  Ku tags back to Garrini, and he just manhandles Dao, making him your Dao in Peril.

Quick tags by Violence is Forever, isolating Dao from his corner shows great strategy by Garrini/Ku, and they go on taunting TJP.  Nice double team by Violence Is Forever had Garrini deliver an Atomic drop into a Kevin Ku clothesline, but only a two count for Dao.  Ku gets a little overconfident and Dao with a crucifix power bomb desperation move.  He crawls to his corner and manages to tag TJP and he is your Fil-Am-Flash en Fuego. TJP goes up the top rope, but gets pushed off by Garrini.  TJP tags back to Dao and then Dao with a Crossface to Ku, and TJP gets in an Octopus to Garrini, but both men get out of the Pinning predicaments.  Then it becomes a Pier Four brawl, but the end has TJP throw kun into Garrini, sending him out of the ring, with Dao taking advantage with a (rather sloppy) clothesline from the top, and TJP hits a modified Frog Splash to get the one, two, three.

Your Winners via Pinfall:  Bu Ku Dao and TJP

TJP gets on the mic and tells “Short Round” Dao to stick with him, because they’re taking a stroll through Los Parks.

Shots of a hospital come up and now it’s promo time by by King Mo, but he has a somber tone, as he goes by his real name Muhammed Lawal.  He talks about putting away/beat up/beat down/destroyed Low-Ki.  He wants the officials at MLW  Low-Ki not to compete because he is obviously suffering from head trauma, and the piano music swells as Mo says the next time Ki steps foot in the ring with be the last time. The King has spoken.

Holliday watched that match with Stone Cold from 30 years ago, and he looks forward to the match. He wants this, and says that Vega did this to himself, and he’ll enjoy every minute beating him down.  So let’s get to Your Main Event… 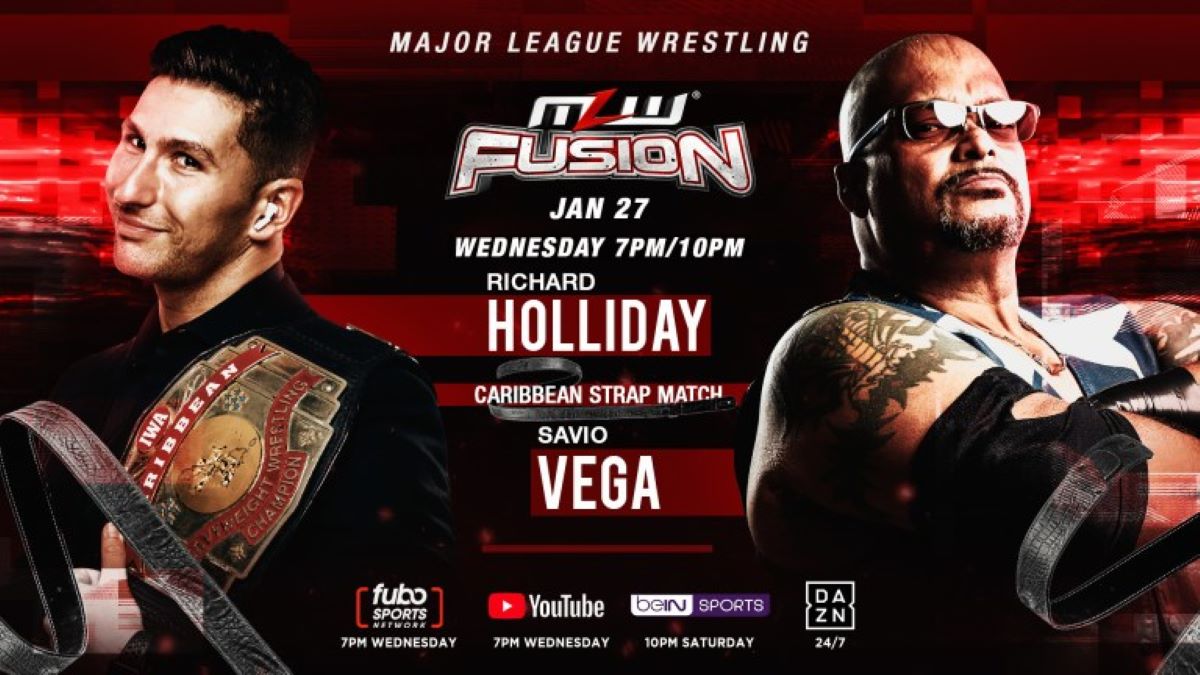 The goal of the Strap match is the competitor must touch all four corners in succession without interruption to win.  Bocchini highlights how many times he’s been in this type of match, from Austin to Carlos Colon, so he is battle tested in this type of match.  Holliday enters the ring and has a quick talk with the referee before putting away his Air Pods to get ready for Vega.  Vega enters and he has the strap all ready to go.   Holliday quickly goes to touch the corners, but Vega ain’t having nada. He uses the strap to yank him down and just whips at him.  Tug of war by Holliday to the Brawling Boricua, as he just uses the strap to choke out, then whips Vega across the back.  Holliday goes to touch just three of the corners, but Vega chops Holliday down.  Vega stomps down on Holliday and then goes to touch three corners, but Holliday stops the momentum with a thumb in the eye.

Vega gives Holiday a back body drop to the outside of the ring, and Holliday is out, but the length of the strap isn’t enough for Vega to touch all four corners.  Vega brings him back, but Holliday snaps Vega’s neck back using the top rope.  Holliday gets three touches, but gets turned inside out by Vega with the strap.  Three touches by Vega to the corners, but Holliday stops the momentum.  A Leather strap assist to Holliday’s windpipe knocks him down and Vega whips away at Holliday, who screams like a stuck pig.  Vega creatively ties up Holliday in the strap, and did three touches to the corners before a desperation kick by Holliday stop that in its tracks.  Holliday hits Vega with a clothesline to a pin, but maybe the lack of oxygen to his brain from getting choked by the strap makes Holliday realizes this is not a regular match.  Double clothesline by both men and they both crash down.  Both are slow to get up, but Vega manages to start up by touching the first corner, followed closely by Holliday.  Both get three corners, but the last corner is blocked by the ref.  Vega tries to get the ref to move, and when he finally drags him out of the way, Holliday touches the last corner for the win.

Vega is left in the ring dumbfounded by what just happened, and Holliday manages to get out of the ring, followed (suspiciously) closely by the ref.  Methinks something smells rotten in Daytona Beach, and it ain’t the seagulls.

The Zenshi/Laredo Kid match is an absolute highlight reel that everyone should seek out, and hopefully MLW will show it on their website.  The Tag match was a so-so affair, but the team of TJP and Bu Ku Dao show some promise.  Kinda curious if this leads to tag gold or to a Strike Force situation down the road (Google “Strike Force”, kids).  While the strap match was a bit of a letdown, if nothing else, Richard Holliday is a proven heel that is showing that he knows how to master the Art of Douchnozzlery.  Real curious what that will lead to down the road, but it definitely has some promise.