Tasha Steelz: ‘Impact has the greatest women’s roster ever’ 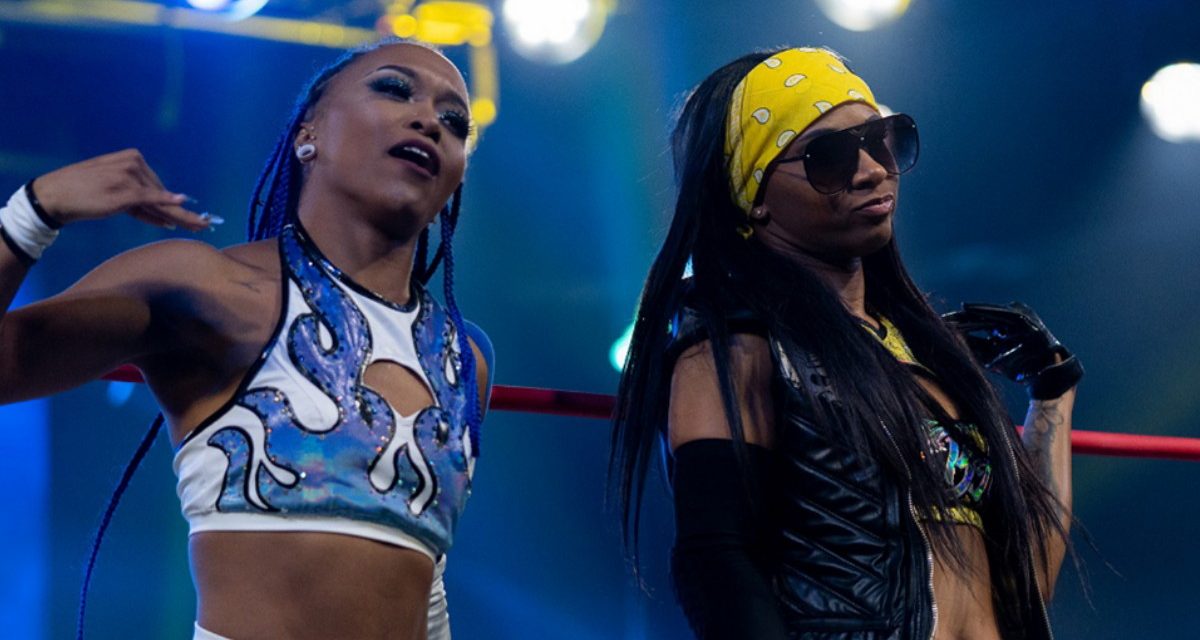 Tasha Steelz is currently atop the Impact women’s roster as half of its tag team champions — with Kiera Hogan, they are known as Fire ‘N Flava. She does not lack for confidence, in herself, or for the entire Knockouts division.

“Kiera and I, we want to prove that we’re the best women’s tag team ever,” said Steelz (real name Latasha Harris) from her home in New Jersey.

AEW has recently invaded Impact Wrestling to a degree, but not the women. As interesting as it has been seeing Kenny Omega, Matt Hardy with Private Party, Tony Khan and Jerry Lynn, Steelz is wondering what it means to the women.

“With just them being backstage, it’s kind of like, ‘Okay, we’re opening the door here at Impact, are you going to open the door in AEW? Because the women would like to play some time, we want to play too,'” said Steelz. In her mind, the Knockouts champion Deonna Purrazzo and the tag champs Fire ‘N Flava are the trio to go to AEW and shake things up. “We can just go ahead and walk on in to AEW and do our little invasion.”

Without naming specific names from the AEW roster or the indy scene, Steelz said she welcomes more names into the realm of the Knockouts.

Steelz was able to capitalize herself and land a roster spot in Impact, in part because of the encouragement from her friend Kiera Hogan.

“We’ve known each other for a long time. And we’ve been friends outside of wrestling, and when we were finally able to connect paths with each other, and, she told me, just keep showing up at Impact for an opportunity, whether they give it to you or not,” Steelz recalled. Eventually, she got her shot, acknowledging that in the early days of the COVID-19 pandemic, it helped her as she was able to get to the tapings when others couldn’t. 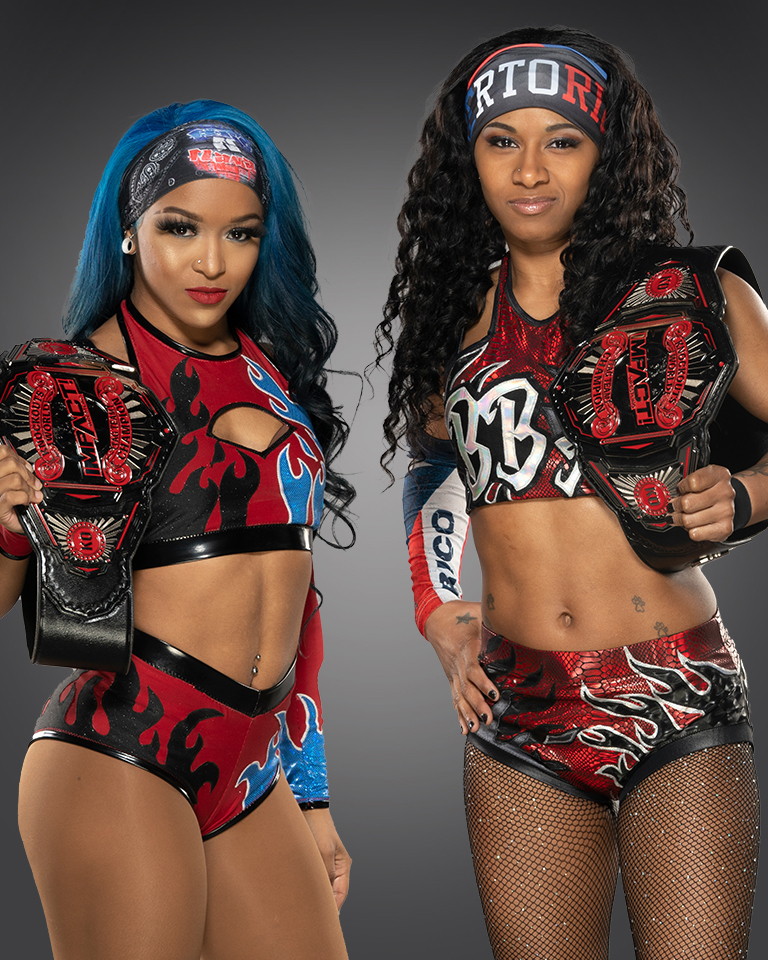 From there, the magic between Steelz and Hogan was obvious.

“They saw how Kiera and I really interacted backstage,” she recalled of her first visit to Impact. In time, “they really had no choice but to watch us and they were just like, okay, we’re going to have to put you two together because this is like right here — it’s comedy, this is gold, this is everything. Yeah, they hit the jackpot and you know, here we are, Knockout tag champions together.”

After the pair won the belts on the Hard to Kill pay-per-view that aired on January 17, beating Havok and Nevaeh, Steelz posted a special shot of her with Purrazzo to her Instagram account. It was a way to say thanks. 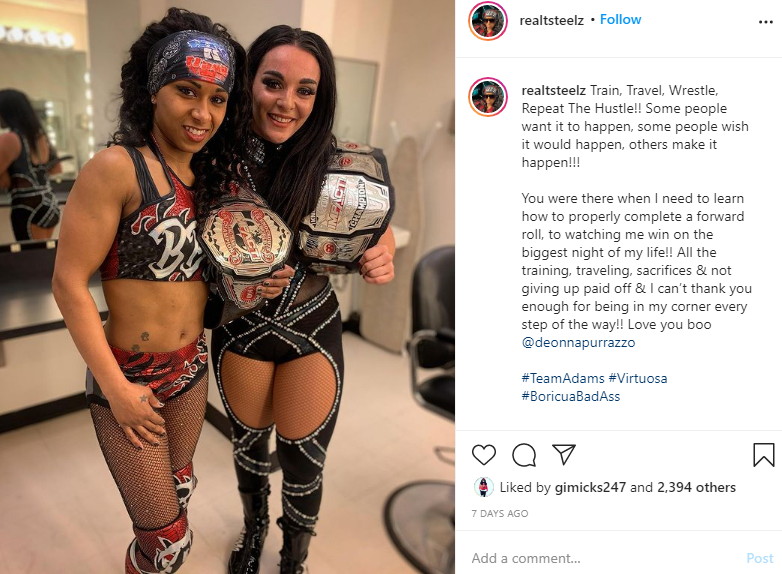 Known to preach about her workouts and regimented nutrition plan, Steelz said that it took awhile to figure out a workaround during the beginnings of the pandemic.

“It was tough at first. I would just do research for alternate things to either eat or to do,” she said. “And of course the gyms were closed for months. It was tough because I really don’t have much gym equipment at home, but the little things that I had, I had to work with.” 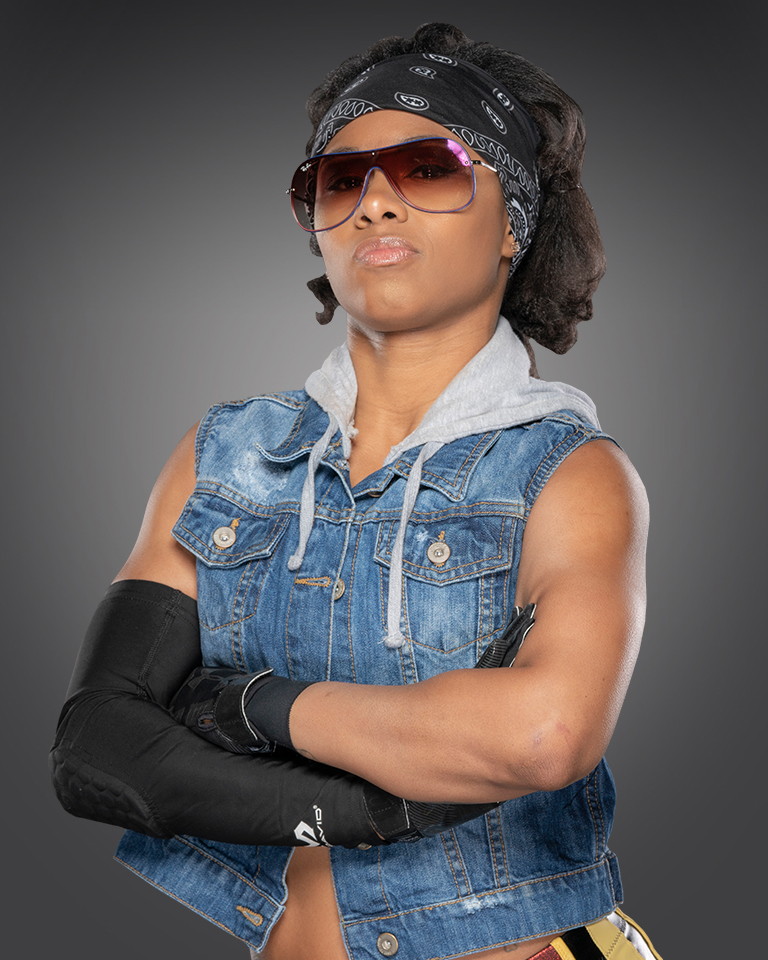 Her main hobby is staying in shape. “Sports and fitness is my thing. I love playing video games from time to time. I just love being spontaneous. I don’t like to sit and be bored or anything like that. But it’s kind of put a halt to a lot of things because of this pandemic. So you have to sit at home, and you’ve just got to make the best of the things.”

The enthusiasm that Steelz has for it all is all her, but it hasn’t always been.

“I have my calm moments, but I love being loud. I used to be just a shy girl, and you wouldn’t know I was in a room unless I coughed or sneezed, so I love being loud and obnoxious, sometimes,” she said.

But now, the Tasha Steelz on Impact is a lot more outgoing.