Tencozy and The United Empire go to war 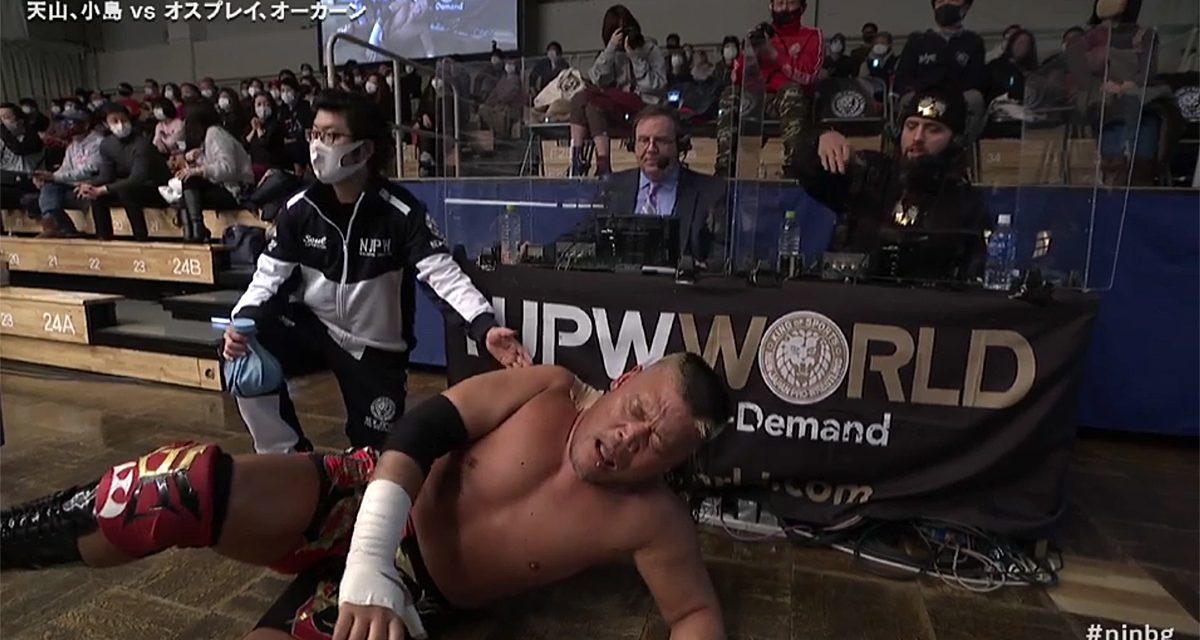 The bad blood between Tencozy (Satoshi Kojima and Hiroyoshi Tenzan) and The United Empire (The Great-O-Khan and Will Ospreay) boiled over once again.

On the fifth night of NJPW’s Road to The New Beginning tour another match between the two factions resulted in a disqualification decision.

Khan and Ospreay storm to the ring without their entrance gear. They are looking for a fight after what happened to them last night. Khan enters the ring, takes the official by the throat and throws him through the ropes to the floor. Ospreay chases the announcer away as well. United Empire paces the ring like caged lions as Satoshi Kojima and Hiroyoshi Tenzan make their way to it. Khan and Ospreay cannot wait so they meet them on the floor and a wild brawl erupts.

Khan rams Tenzan into the ringside barrier. He steps on his throat choking him. The bells sounds, however, the official is still injured and recovering on the floor. To make this night even more special, El Phantasmo joins Kevin Kelly on commentary. 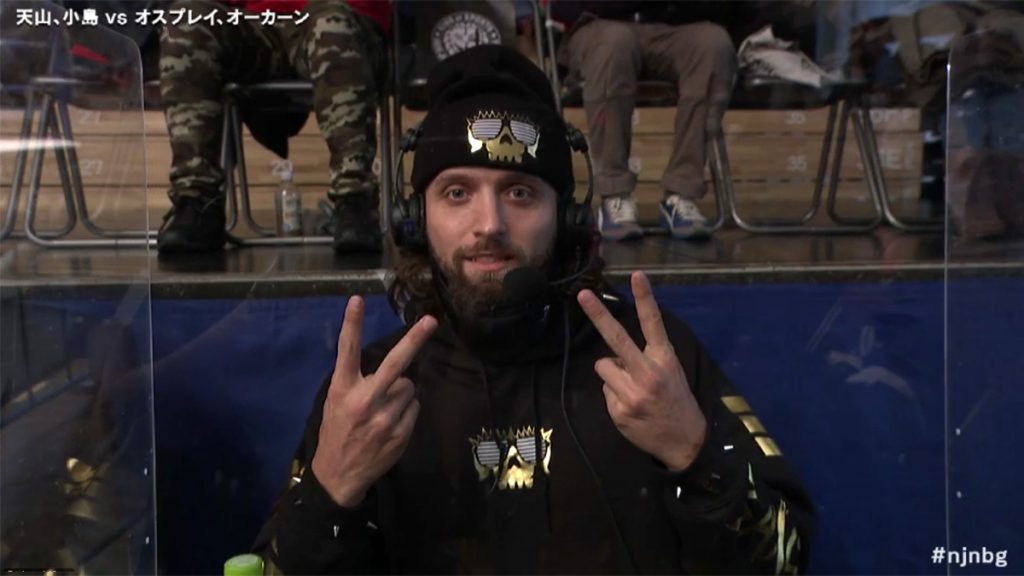 “Get him out of here! I don’t want COVID!” shouts Phantasmo as Tenzan is hurled into the announce table.

“How dare you!” Kelly snaps back at him.

Ospreay slams Kojima on the ring apron rattling his spine while Khan takes the fight back to the ring. Tenzan and Khan engage in another Mongolian Chop showdown.

“What is it with both of their haircuts?” asks Phantasmo.

Tenzan wins the Mongolian Chop duel clotheslining the breath out of Khan. 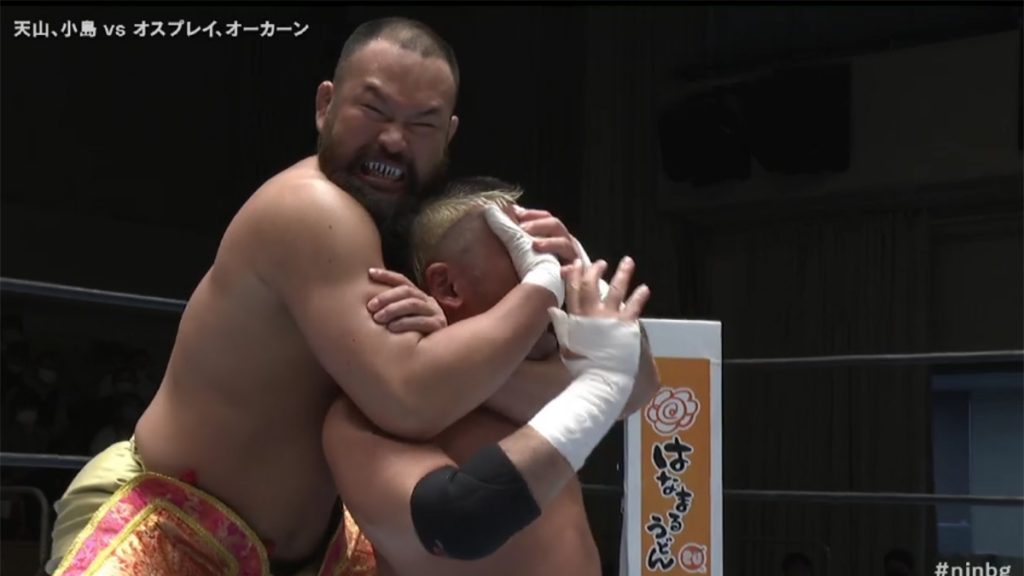 Tenzan stands Khan up for a brainbuster but Ospreay whacks him across the back with a steel chair. Ospreay leaps upon Tenzan punching him in the face and head. The official waves his arms on the floor to perhaps call the match. Khan and Ospreay star rearranging the furniture pulling chairs from under the ring and throwing them into the ring. As Khan puts all the chairs into a pile in the middle of the ring, Ospreay sends the official into the steel barricade and heads off Kojima from making any sort of rescue. The bell is finally rung ending the bout in a disqualification. Kojima uses his strength to break free. He stops Khan from giving Tenzan an Eliminator on the steel chairs. Kojima pays Khan back for his evil intentions by bashing him with one of the chairs. Kojima creams Ospreay with a Lariat using the steel chair for bonus damage. 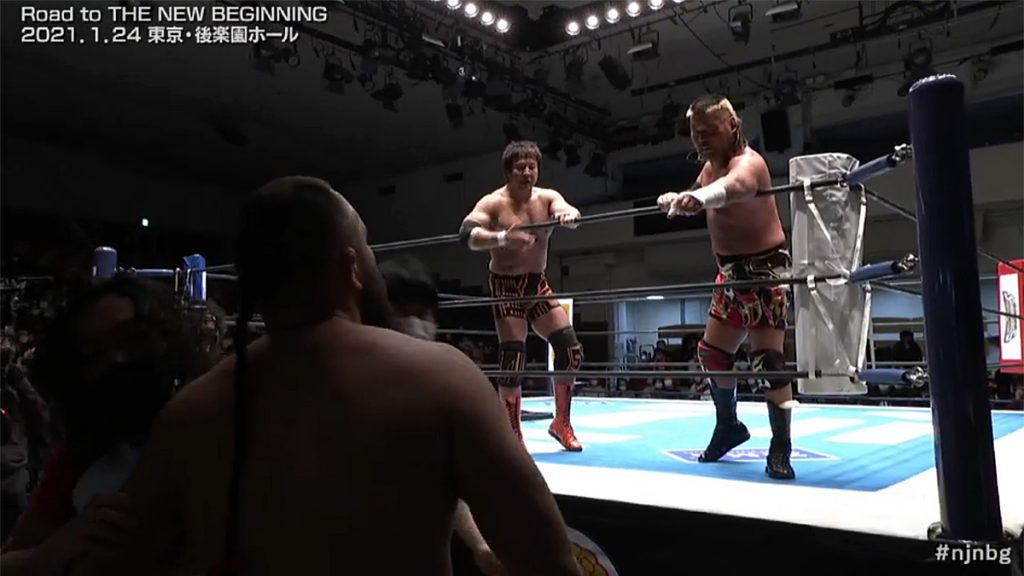 Tencozy dares The Empire to return to the ring. Courtesy: NJPW.

Kojima and Tenzan taunt Empire from inside the ring. An enraged Khan starts throwing chairs at them. The Young Lions drag Khan to the back.

On January 30th at the The New Beginning at Nagoya event Kojima will fight Ospreay in a singles match while Tenzan battles Khan on the card.

We guess that Uemura doesn’t want to live much longer. Why else would he get into Suzuki’s face during his ring entrance? Suzuki snaps beating Uemura in and out of the ring. Douki takes his stick and hits Tiger Mask in the face when the official’s back is turned. Desperado seems to have no code of ethics when it comes to other masked men. He tries to unmask Tiger Mask until the official steps in. El Desperado pins Uemura with Pinche Loco.

“He is wearing a shower curtain for his entrance,” Phantasmo says about Okada’s attire. Dick Togo chokes out Hashi with his garrote from behind. Evil pins him with Everything is Evil.

Bushi taps out to the Clover Leaf from Tanahashi. The Ace and Takagi share some pleasantries.

“Ha! Ha! Bushi, you suck!” yells Phantasmo from the commentary desk as Bushi walks by to the back.