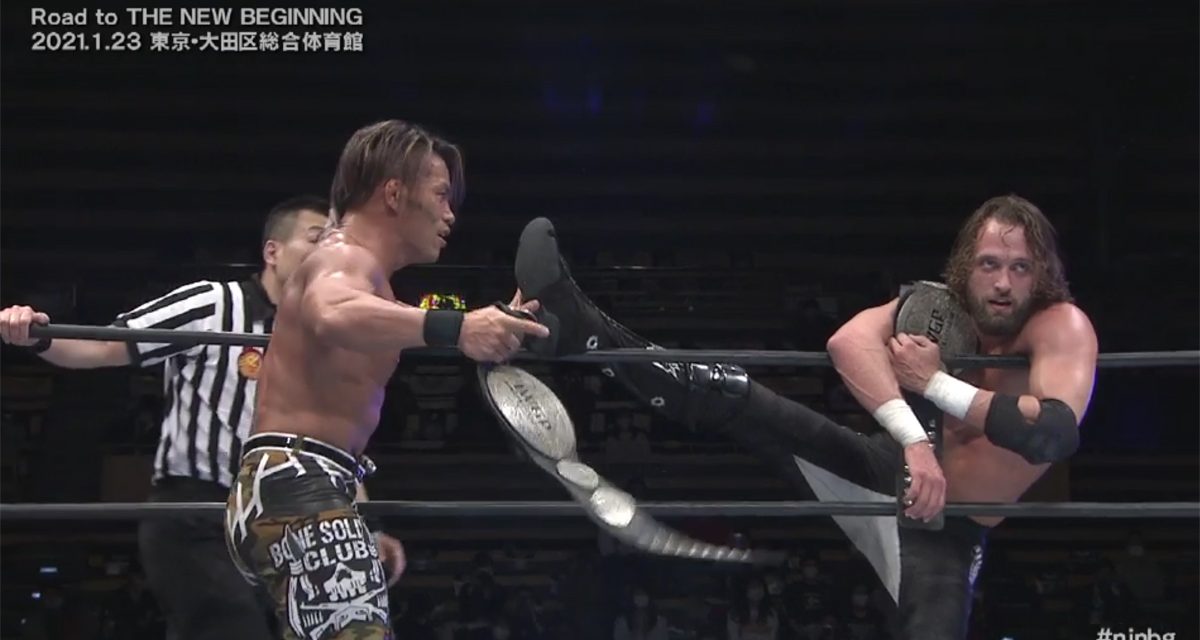 “No brass knuckles in there,” laughed El Phantasmo as official checked over his contentious boot before the match.

Kanemaru tries to rip it off to see what is inside and what, if anything, is making Phantasmo’s super kick (Sudden Death) so very super.

“Don’t worry about the boot. Worry about me. I am a two-time Super-J Cup winner, bitch!” said Phantasmo to Kanemaru.

Kanemaru dodged Phantasmo’s kick later in the match and referee Red Shoes was the victim instead. Red Shoes had to be carried to the back for medical attention. Kanemaru had Phantasmo pinned with a reverse DDT but there was no official to make the count. Desperado nails Phantasmo in the head with one of the title belts.

Another official arrives so the match can continue. Kanemaru has Phantasmo pinned again, however, Ishimori pulls the referee out of the ring. Ishimori sneaks up on Kanemaru hitting him from behind with one of the title belts. Desperado leaps into the ring with the other title belt and he and Ishimori duel. Desperado is knocked silly after receiving a belt to the head. Kanumaru evens the score smashing Ishimori in the noggin’ with his whiskey bottle. Phantasmo hits Kanemaru with a low-blow. He picks up the whiskey bottle whacking Kanemaru in the jaw. El Phantasmo screams for the official to lay down the count. Kanumaru kicks out at two.

Phantasmo tunes up the band, adjusts his boot and unleashes his kick. Kanemaru pulls the official in the way. A new official rushes down to the ring to first assist the injured official and then to call the rest of the match. The official takes a second to make sure that everyone who should be out of the ring is out of the ring. He doesn’t see that Kanemaru is laying on one of the title belts. Kanemaru pulls an Eddie Guerrero by throwing the belt to Phantasmo and falling on the mat as if he had been struck. Kanemaru goes for Deep Impact but Phantasmo punches him in the “lower abdomen”. Phantasmo lands his Sudden Death kick and we have new  IWGP Junior Heavyweight Tag Team Champions. 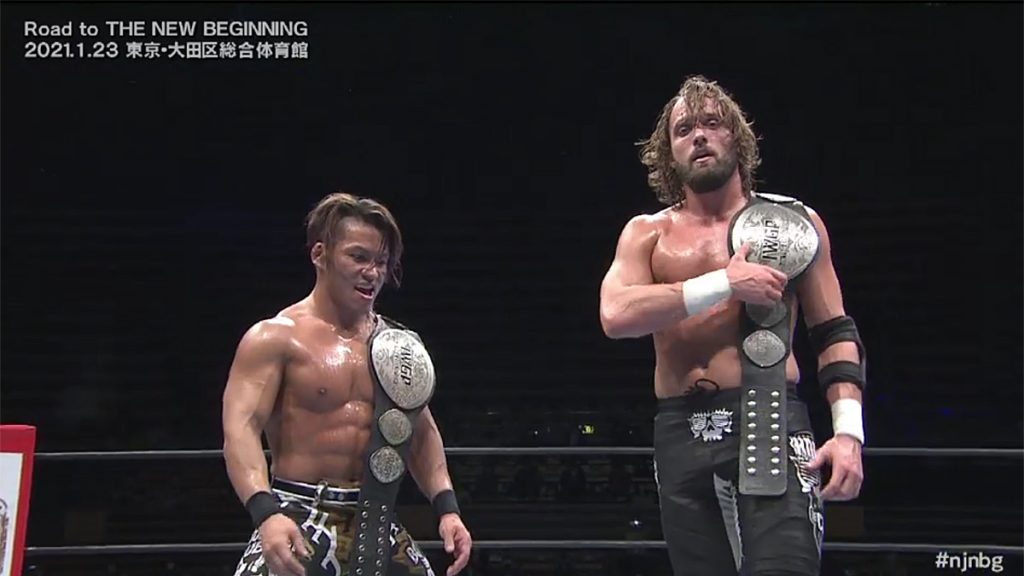 “You like that? You like my right foot? It is the most powerful tool in professional wrestling. It is not my fault you have all been seeing 15 to 20 super kicks a match. You better get used to one because I am an elite athlete,” said Phantasmo to the crowd.

With his longtime partner Satoshi Kojima in tow, Hiroyoshi Tenzan returned to New Japan tonight after being demolished by The United Empire a few short weeks ago at New Year Dash. He was stretchered out of the building at the time. Tenzan didn’t even bother taking off his mask or his jacket before raining down blows on the Great-O-Khan as Kojima went after Will Ospreay. Khan blocks Tenzan’s Mongolian Chops delivers a flurry of his own. A series from Tenzan though drops Khan to the mat.

Later in the bout, Ospreay brings his Rev-Pro British Heavyweight Championship into the ring. That distracts the official so that Bea Priestley can hit Tenzan with a chair shot. Tenzan shoves Ospreay who collides with Khan and the steel chair. Tenzan heaves the official away and beats Khan with the steel chair.

“Those guys are cheating!” yells Priestley in the official’s face. Tenzan and Kojima are disqualified.

Tenzan ignores the bell and the official as he continues to batter Khan’s back with the broken and dented chair. Kojima gives Ospreay a Lariat which flattens him. Tenza puts Khan in a Camel Clutch while Young Lions scramble to stop him.

“You are the referee! You are supposed to do something!” cries Priestley to the official as order is finally restored.

Sanada and Ibushi fight on the apron. Bushi runs into both of them knocking them to the floor. Sanada and Ibushi are both eliminated at 12:28. Bushi is sent off the apron with a back elbow by Master Wato at 13:43. Master Wato is powerbombed off the apron by Takahashi at 13:53. At 16:14, Takahashi is drop kicked off the apron by Sho. This leaves Shingo and Naito versus Sho, Honma and Tanahashi. A running clothesline from Shingo boots Sho at 17:43. A Dragon Screw Leg Whip by Tanahashi sends Shingo out at 20:08. 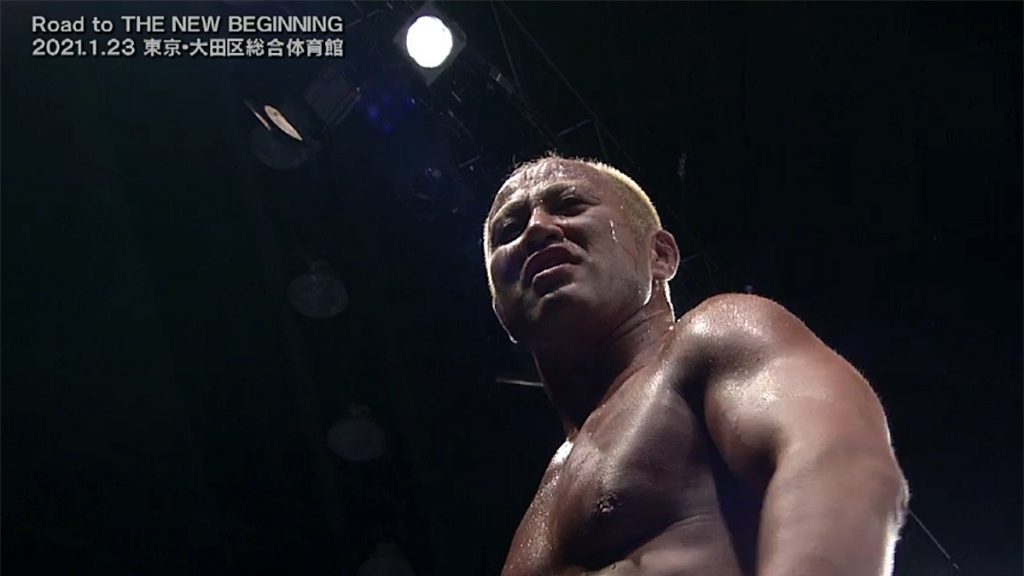 It is the leader of Los Ingobernables de Japón, Tetsuya Naito, versus Honma and Tanahashi. Naito catches Tanahashi with a baseball slide kick at 21:55 to end his night. A head butt from Honma sends a stunned Naito into the ropes. A running clothesline at 24:51 has Naito flying over the top rope to the floor giving an ecstatic Honma the win. 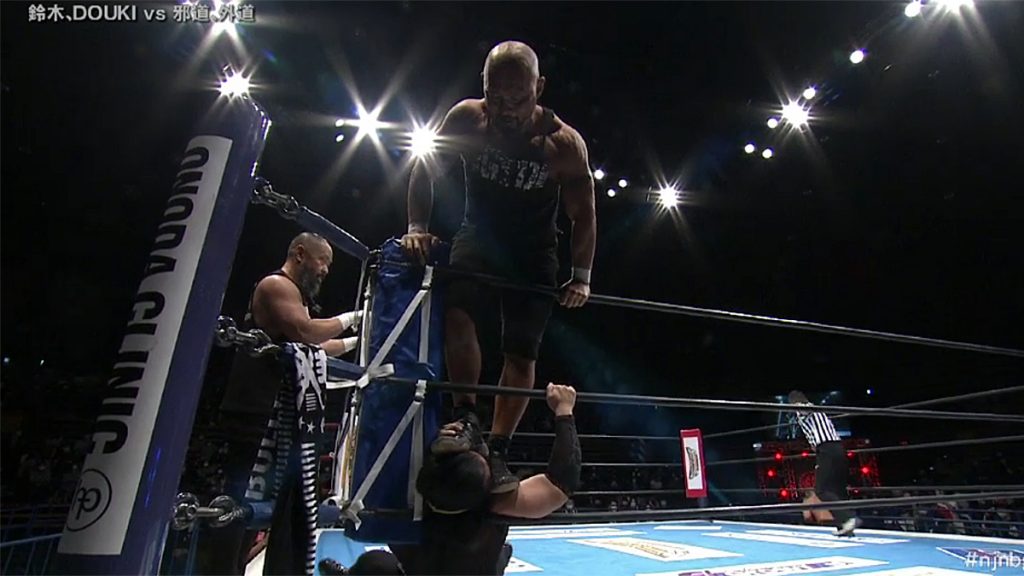 Jado has some fun with Douki. Courtesy: NJPW.

Douki and Jado start swinging their respective illegal objects before the bell. The official is kept busy making sure Suzuki behaves himself. This gives Jado and Gedo the chance to work over Douki and isolate him. Douki survives to get a sneaky pin on Jado while Gedo and Suzuki are tied up on the floor. An angry Suzuki rips into some Young Lions on ringside. Jado pokes Taichi with his kendo stick. Taichi is on commentary tonight for some reason. Jado tells Kevin Kelly he wants a one-on-one with Douki…any time, anywhere. 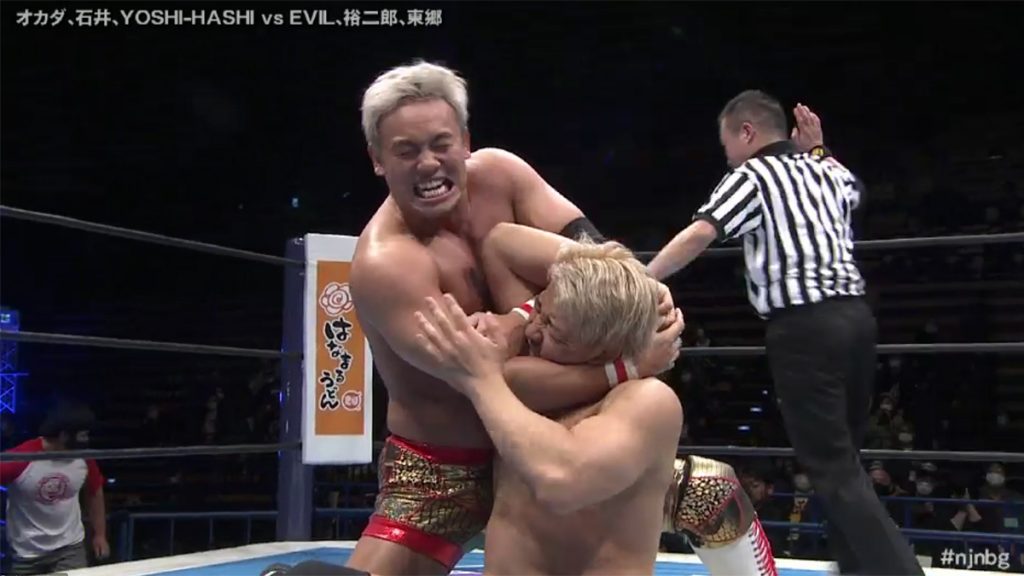 Evil once again avoids any confrontation with Okada. Okada scores the win for Chaos with the Money Clip submission on Yujiro.

Satoshi Kojima and Hiroyoshi Tenzan versus The United Empire (Great-O-Khan, Will Ospreay)

Winners: The United Empire (Great-O-Khan, Will Ospreay) via disqualification.