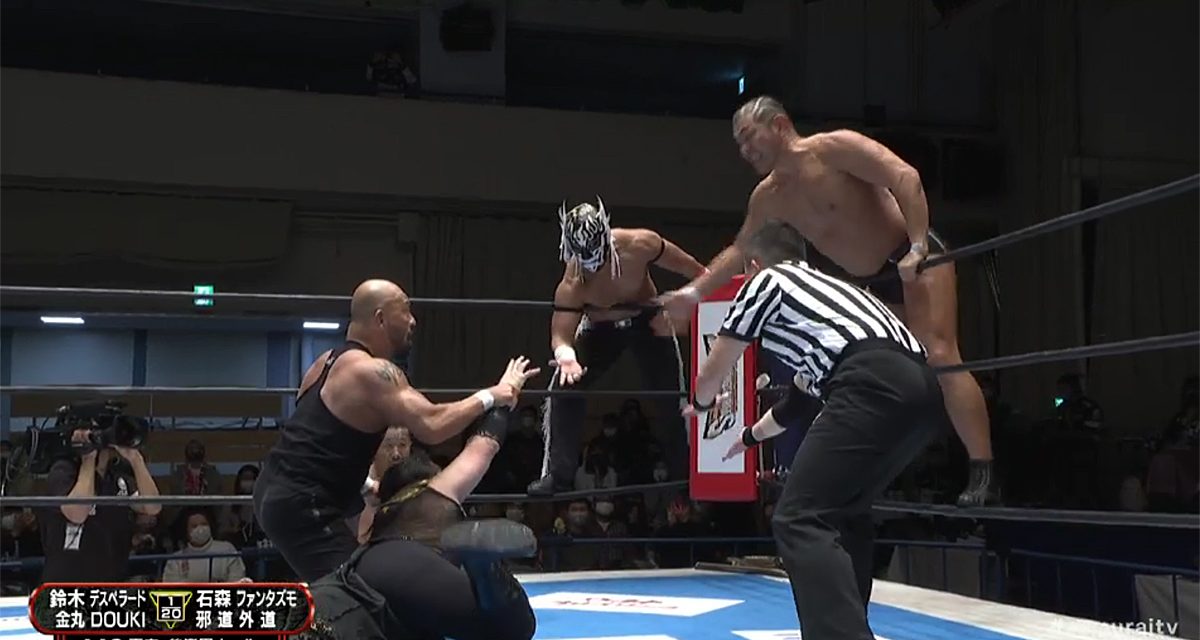 Suzuki-gun had Bullet Club in their sights heading into night two of NJPW’s New Beginning tour.

Douki and Jado have a duel with their respective sticks. The official rings the bell any way. Kanemaru goes after Desperado’s boot trying to get to the bottom of that suspect super kick.

Alone at the announce desk for the evening, lead commentator Kevin Kelly addressed everyone’s thoughts on MIA Bullet Club member ‘Switchblade’ Jay White who hasn’t been at any of the New Beginning shows thus far.

In the ring, Jado paid Douki back by cracking his kendo stick over his back as he bounced off the ropes. Jado then yanked him out of the ring throwing him into the ringside barrier. Man, these dudes just hate each other. Perhaps it is stick envy.

“I don’t know where the heat started with Jado and Douki,” asked Kelly as they continued to go at each other.

Later on, Jado actually demands to be tagged in so he can lay some more punishment on Douki. Jado begins choking out Douki so Sukuki moves to enter into the fray until the official stops him with a warning. El Phantasmo unleashes a back scratch but Douki is wearing a shirt so it has no effect on him.

Yes, a phrase I never thought I would be writing. Phantasmo twisted Douki’s nipples in the ring. What is the world coming to,  I ask you? 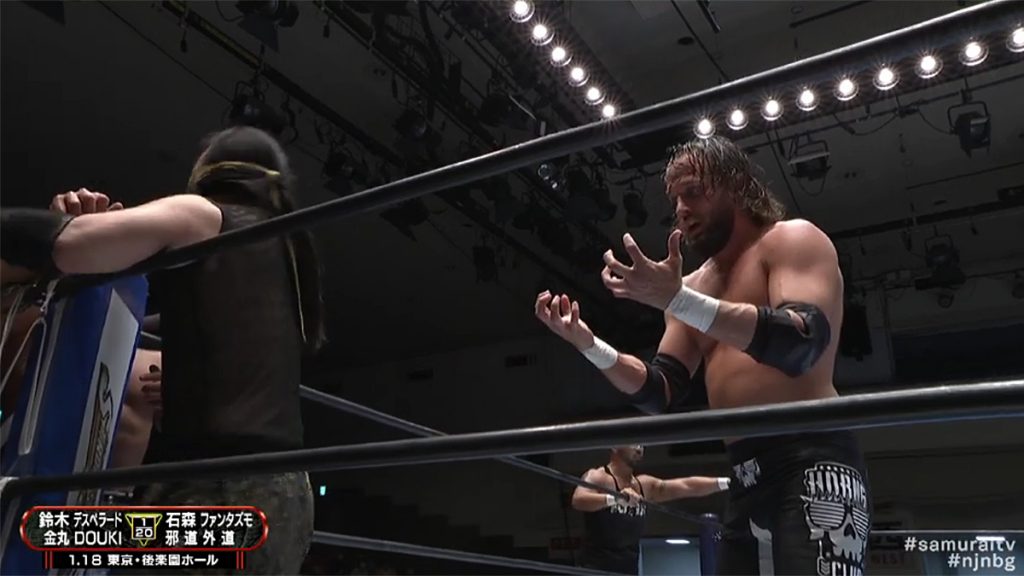 Still unable to tag out, Douki lays some chops in on Jado. Jado just brushes them off. Jado jokes around a bit by holding Douki’s hand out which is inches away from his Suzuki-gun partners.

El Phantasmo’s suspected loaded boot comes into focus once again. El Desperado is almost completely knocked out when Phantasmo kicks him in the stomach. All Desperado can do in retaliation is poke Phantasmo in the eye.

Phantasmo returns with the bell hammer in hand. The official cuts him off at the pass. Taking advantage of the distraction Gedo puts on his brass knuckles. Suzuki grabs him from behind in a rear naked choke. As the rest of Bullet Club and Suzuki-gun brawl on the floor El Desperado puts Gedo in Numero Dos for the submission victory.

Uemura does his job. He survives The Empire long enough so that he can tag in Kojima who goes right after Ospreay for what he did to his friend Tenzan. Kojima DDTs both Khan and Ospreay. Uemura is pinned by Khan’s Eliminator.

The match serves to push an Okada, Evil feud. Unlike on Night One, Evil has no choice but to confront Okada. He gets some help from Dick Togo who pulls out his garrote. Ishii spots Togo and kicks it out of his hands. Okada makes Togo tap out to the Money Clip.

Honma has a great performance, probably one of his best matches since he returned from that devastating injury. He even takes out both Naito and Sanada at one point. Honma puts up a great fight but he cannot survive Skull End from Sanada. Naito plays a joke on Hiromu by hiding his trophy under the ring. Naito blames it on one of the Young Lions.

Tanahashi pins Bushi with a Slingblade and a High Fly Flow.