RAW: Is Alexa Bliss a conduit for the Fiend? 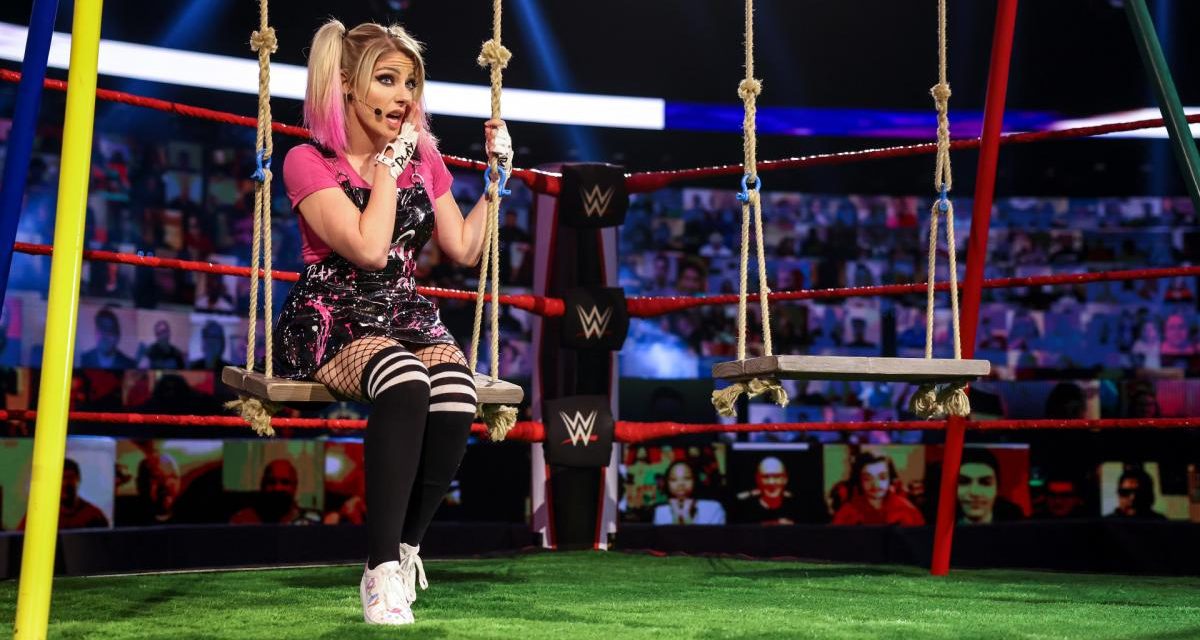 The Royal Rumble is two weeks away, and RAW is missing some heavy hitters. Drew McIntyre is out due to COVID, Kofi Kingston is out with a broken jaw, the Fiend was burned alive a TLC and hasn’t been seen since, then last week Alexa Bliss shot a fireball into Randy Orton’s face. Don’t worry, WWE has the answer..(checks notes)…Goldberg is back. Never mind. Time to head into the ThunderDome.

Randy Orton, sporting a mask, addresses the WWE Universe from a darkened arena. Sounds like that fireball to the face really messed him up mentally, if not physically. Orton talks about the first degree burns he received at the hands of Alexa Bliss, but he doesn’t blame her. He blames the Fiend, who is trying to stop Orton’s inevitable win at the Royal Rumble. He vows to stay in the match. The pain will fuel him. He will burn everyone else Royal Rumble plans to ash.

Lacey Evans and Ric Flair entered the building together, earlier today. Charly Caruso asked the couple about their relationship. Evans is offended by the question, even though last week Ric helped Lacey beat Charlotte. Lacey just wants to learn from the best.

Royce attacks Flair on the ramp during her entrance.

After a commercial break, the match is in progress. Flair pummels Peyton in the corner and then delivers forearm shots on the mat. The two fight on the floor, with Charlotte unleashing massive chops. Peyton dodges and Charlotte chops the ring post. In the ring, Flair rocks Royce with a right. Flair with an elevated neck breaker. She goes for the pin, when Ric makes an entrance, with Lacey wearing his robe. Charlottte turns around into a spin kick. Royce covers, but Flair kicks out and we go to commercial.

Royce is smashed into the turnbuckle. Flair hits a backbreaker in the corner. A big boot sends Royce flying off the apron. Charlotte yells at Lacey Evans, as Royce beats the count to get back in the ring. Peyton with a quick knee to the head and several elbow strikes. Flair responds with a chop block and goes after the knee. Flair locks in the figure four and bridges into the figure eight. Peyton taps out. Flair keeps the hold applied after the bell.

The Hurt Business is not a fan of Riddle’s fashion sense and choice of foot wear. Lashley calls flip flops unsafe before stomping on Riddle’s foot.

Back in the locker room, Riddle tells Lucha House Party that he will be good to go later tonight.

Ali gets in Woods’ face, who pops him with a quick punch before the bell. Mace has to be held back as we go to commercial.

Mace traps Woods in the corner, only for Woods to escape. Woods with a kick to the mid section, but Mace is able to grab him by the throat and slam him in the middle of the ring. Mace with a knee the back. Woods tries to chop down Mace, but a big right stop him in his tracks. Woods with a low drop kick and drops elbows to the back on the neck. Mace catches Woods going for the Honor Roll, but a dropkick sends Mace to the floor. Ali tries to hype him up, but a baseball slide from Woods sends Ali into the announce table. Ali orders everyone to attack. They feint an attack, allowing Mace to catch a distracted Woods. Mace hits a side slam and is able to get the three count.

RAW Women’s champ, Asuka, is asked about being invited to Alexa’s Playground. The champ doesn’t know anything about that.

It’s time for the WrestleMania report. Triple H and Stephanie, using aliases, fill us in on WrestleMania. This year’s Mania will be back in Tampa, in Dallas for 2022 and Los Angeles in 2023.

Alexa says that last week, she just wanted to clear the air, but things got a little heated. Get it? She welcomes Asuka to the show. The champ isn’t quite sure what to make of this. Especially when Alexa starts talking to someone who isn’t there. Alexa wants to have some fun. She has some big news. Alexa is announcing her entrance into the Royal Rumble Match. Asuka tries to play along and starts dancing to her music, Bliss gets angry. Asuka thinks she is talking to the Fiend, but Bliss tells her not to say his name. Asuka leaves the ring.

The Miz and John Morrison are asked to give some insight into the Dirt Sheet with Goldberg, tonight. Miz tells Sarah Schreiber no spoilers.

Shayna Baszler says she will beat Mandy Rose again and then she will eliminate everyone in the Rumble, even her partner. Nia Jax doesn’t take well to that statement.

Jeff Jarrett gives his thoughts on Goldberg versus Drew McIntyre. He likes Goldberg to win.

Jax joins the commentary team to talk about any issues with Baszler. Nia confirms that she won’t have her partners back. Rose with a flapjack and dumps Baszler into the corner. Rose is favoring her one arm. Shayna focuses on the injured left arm and is able to lock in the Kirifuda Clutch. Rose quickly taps out.

After the match, Jax and Baszler argue outside the ring. Dana Brooke drop kicks Jax into Baszler and both crash into the ring post.

Backstage, Charly Caruso mentions that Baszler and Jax aren’t getting along. Jax points out that they have never gotten along. Baszler thinks now is the time for a rematch for the tag team titles.

Sarah Schreiber welcomes Charlotte Flair to the interview area. Before they can talk about the tag team title rematch, Sarah asks about the Lacey Evans situation. Flair knows that Evans is using her dad to get to her. Lacey can wear the robe, but she will never wear the crown.

Adam Peirce is talking to Ricochet about the Royal Rumble match. If he can beat AJ Styles, that will go along way in getting him an opportunity. Styles crashes the meeting, saying why take advice from someone who tucked his tail and ran. Ricochet is confident he can beat AJ.

The Miz and Morrison introduce their biggest guest in the history of their show, Goldberg. That’s not Goldberg; it’s Gillberg! Miz and Morrison are in the on the joke. Drew McIntyre’s music hits, but it’s just another imposter. The Miz is not impressed with the McIntyre stand in. He argues with Morrison about the casting, until Gillberg interrupts. Miz and Morrison predict both Goldberg and McIntyre will lose when he cashes in the Money in the Bank contract.

Cedric tries to make a point early in the match, but heading to the corner but not tagging out. Lince Dorado with a head scissors. When Cedric looks for a tag, Benjamin and Lashley shun him. Dorado nearly gets a pin after a moonsault. Benjamin makes a blind tag with Cedric on the ropes. He takes down Lince with a clothesline. Lashley tags in and the two take down Dorado with a big shoulder tackle. Alexander tags himself in, only for Benjamin to tag in. The two argue. Benjamin beats down Lince in the corner, only to have Alexander tag in again. Dorado with a handspring cutter. Benjamin tags himself in and shoves Alexander out of the ring. We got to commercial.

After the break, the Hurt Business still aren’t on the same page. Benjamin tags in to continue the beating on Dorado. Lince is placed on the top turnbuckle, but kicks Cedric away and connects with a cross body. Lince tags in Riddle, who crashes into Lashley in the corner and than takes out Benjamin on the apron. Riddle fights out of a powerbomb, but whiffs on the PK. Riddle with the final flash knee, but misses the floating Bro.

Metalik tags in, and gets dropped by Benjamin. Alexander tags himself in again. Lashley tags in, delivering a spear to Metalik. He applies the Hurt Lock and Metalik taps out.

Winners via submission: The Hurt Business

After the bell, Riddle is able to deck Lashley.

Elias doesn’t want another misunderstanding with Jaxon Ryker. Last week, Ryker did not walk with Elias. This week, he wants Ryker to finish what he started. Jeff Hardy needs to accept the Universal Truth.

Drew McIntyre joins us via video with a message. He enjoyed the clowning of Miz and Morrison, but he is a lion and lions eat clowns. McIntyre respects Goldberg, but he will do what he has to do to retain the title.

Ryker and Hardy brawl around the ring. Ryker beats him down to the mat. Hardy with a head scissors and then an atomic drop. He drops the legs in the mid-section. Hardy misses with a splash in the corner, and Ryker explodes into him with a clothesline. Ryker tees off on Jeff on the mat. Hardy kicks out of a pin.

Ryker applies a head lock on the mat. Hardy with a jaw breaker and hits a neck breaker. He goes up top, but Elias knocks Jeff off. The ref calls for the bell.

Ryker is not happy, telling Elias he didn’t want help. Elias misunderstood.  Hardy takes a shot at Elias and looks for the Twist of Fate. Ryker counters and spikes Jeff into the mat. Elias and Ryker are still trying to get on the same page.

Bliss is in a playful mood to start the match. Asuka kicks out of an early roll up. She lands a series of strikes and takes Bliss down with a knee to the face. Asuka continues the offense with a shining wizard. The lights fall on the ThunderDome in the middle of the match and we go to commercial.

After the break, the ThunderDome is bathed in a purple light and Bliss has transformed into a Goth look. Asuka is reluctant to attack. When she does, Bliss just steps away. Alexa ducks a kicks and blocks every strike. Asuka connects, but only to run right into a forearm shot. Asuka with a knee strike, but is stopped in her tracks when Bliss bends back in the corner like the Fiend. Bliss goes for the mandible claw. Asuka blocks it, only to get taken down with a big right. Alexa picks Asuka up by the chin. The two trade shots. Alexa catches Asuka and delivers Sister Abigail. She covers to get the win.

The screen flashes and Bliss is suddenly wearing her outfit from the start of the match. She channels the Fiend by ending the show with a, “Let me in”. See you next week in the ThunderDome.

Any show with an appearance by Gillberg is okay in my book. The Dirt Sheet was a fun segment, which is a nice palate cleanser as the wrestling is solid every week. So what you will about the storylines, but the matches are top notch. AJ Styles and Ricochet put on a very good match.  The six man tag continued to tease issues within the Hurt Business, but I don’t think they are breaking up anytime soon. The Alexa Bliss/Fiend story is still going strong, although, I was surprised that Randy Orton didn’t show up during the main event.