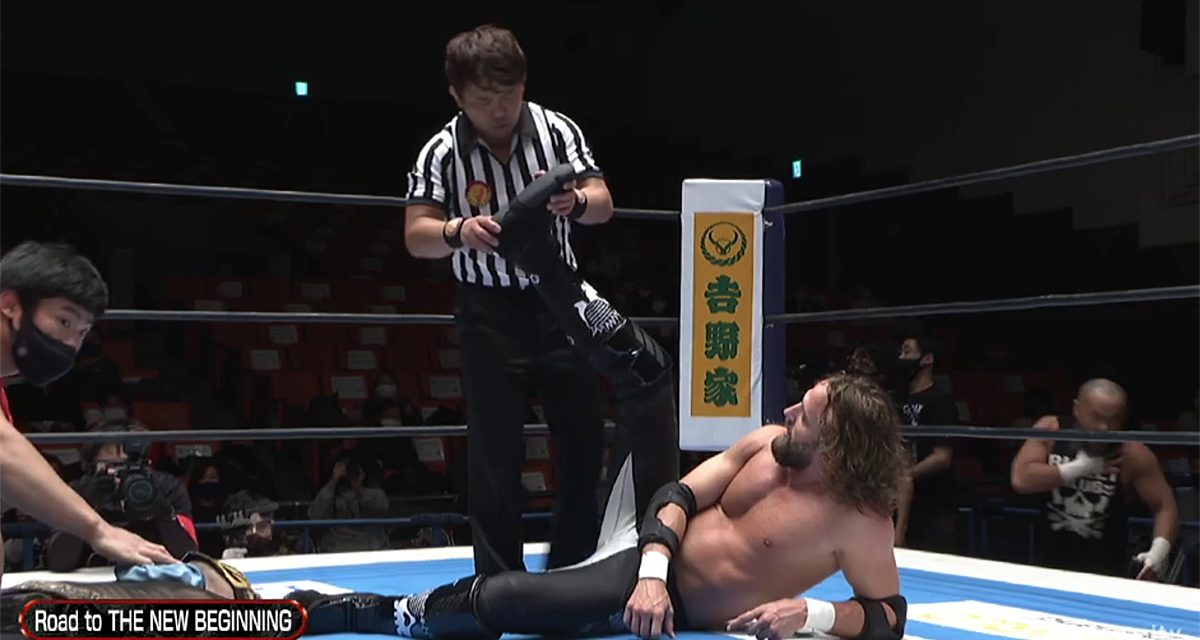 He spent nine months kicking maple trees in the Canadian wilderness. That’s his story and he is sticking to it.

After Bullet Club’s victory over Suzuki-gun on night three of the Road to New Beginning tour, El Phantasmo graciously joined a solitary and Kevin Kelly on commentary for a few matches taking the time to explain his new and devastating move.

“The ugliest and most overrated venue in professional wrestling. God damn! Look at these ugly ass orange seats. Disgusting,” is what Phantasmo had to say about Korakuen Hall itself.

With that observation, Kelly grilled Phantasmo about his super kick.

“What’s in the shoe?” asked Kelly.

“My size 12 Canadian maple foot and a red, black Nike performance athletic sock. That is what is in my boot,” answered Phantasmo.

“So, why is everyone you are hitting with that super kick complaining and telling the referee that you might have something in there?” continued Kelly with his inquisition.

“Sorry, Kevin. Obviously I have a pair of brass knuckles in my shoe because brass knuckles fit in shoes,” laughed the Head Banger. “I feel bad for the fans of NJPW because for a few years before I got here they were accustomed to seeing 15 or 20 little love tap, super kicks. You see, I spent nine months in the Canadian wilderness training my ass off, super kicking every single tree that I could find. Right now, you all can see it. I have pin-point accuracy and I have world class knockout strength in my right foot.”

Douki and Jado continued their feud with Bullet Club jumpstarting the match so that Jado could clobber Douki with his kendo stick on the floor. Jado choked out Douki then attempted to carve his eye right out of his skull with the kendo stick. 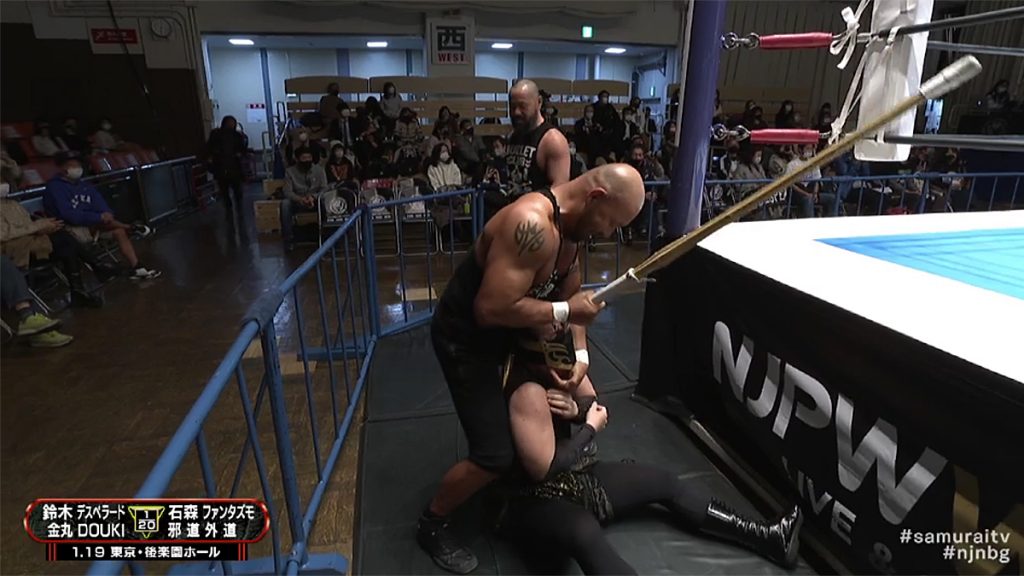 Phantasmo kicked Kanemaru in the bread basket with his super kick. Kanemaru was down and out. Suzuki had enough of Bullet Club swarming Kanemaru. He tore across the ring, shoved the official out of the way to get him some of Bullet Club.

Jado spit at Douki who also charged into the ring. Suzuki grabbed a steel chair but the official stopped him from using it. Kanemaru frees himself from Jado to finally reach his corner to tag in a very irate Suzuki.

Jado rakes Suzuki’s eye so that his rear naked choke on Gedo can be broken before it is too late. Suzuki takes Jado down with a Fujiwara Arm Bar. El Phantasmo tries his luck with Suzuki. His forearm barrage has no effect at all. The demented Suzuki just chuckles. El Desperado adjusts his boot but Suzuki catches the kick before it lands. He puts Phantasmo in a leg lock. Phantasmo taps out but he is not the legal man. 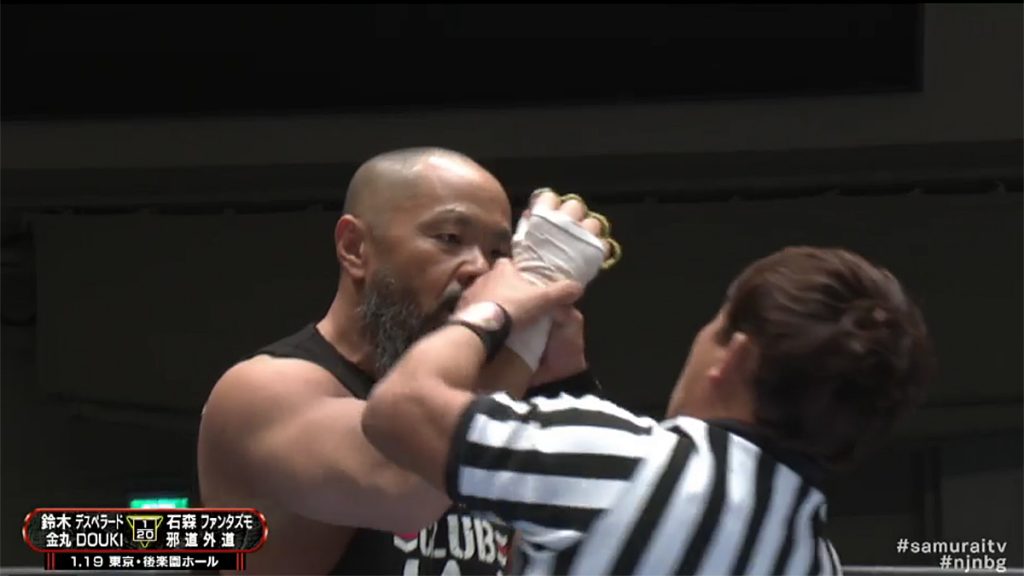 Gedo is caught in the act once again. Courtesy: NJPW.

From outside the ring, Jado hits Desperado across the back with his kendo stick resulting in a long slice down his back. Phatasmo steps in, adjusts the boot again before stomping on Desperado’s hand. Desperado acts like his hand was hit with a baseball bat.

While everyone scuffles on the arena floor, Gedo puts on his brass knuckles but the official confronts him before he can use them. Douki wins a steel pipe versus kendo stick showdown with Jado. Phantasmo adjusts his boot super kicking Douki for the pinfall. Phantasmo does his best Undertaker cover folding Douki’s hands over his chest, flipping back his hair and sticking his tongue out. The match may be over but Suzuki isn’t done. He puts Jado in a submission hold on the floor. Meanwhile, the challengers (Phantasmo and Ishimori) pose with Kanemaru and El Desperado’s IWGP Junior Heavyweight Tag Team Championship belts. The current champs put up the titles this Saturday night.

In just four days Tenzan will be able to get his revenge on The United Empire. Tsuji is blocked from making a tag most of the match. When Kojima finally steps in he delivers the machine gun chops twice to Ospreay and DDTs Khan. Kojima blocks Khan’s Mongolian Chops and gives Khan a taste of his own medicine shouting Tensan’s name. The United Empire gets the win though with Ospreay stunning Tsuji with the OsCutter.

Hashi has Evil in the Butterfly Lock. Togo tries to bring a steel chair into the ring. Hashi breaks the hold to see what the heck is going on. Evil punches Hashi in the “lower abdomen” pinning him with Everything is Evil.

Takago puts Wato away with Made In Japan.