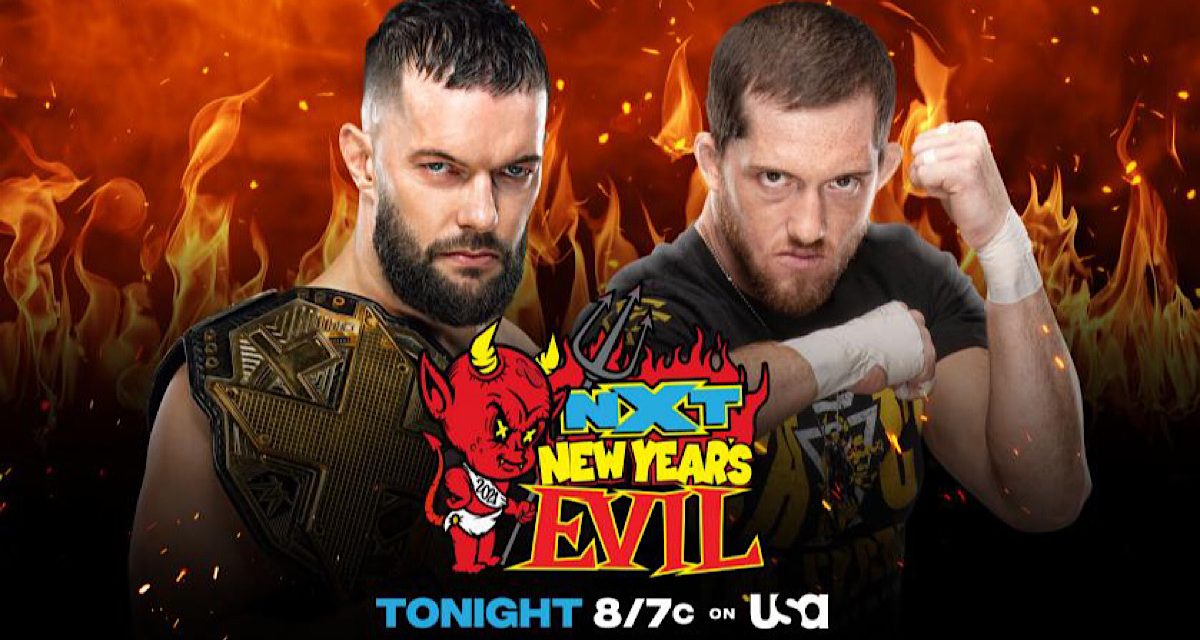 The yellow brand’s opening 2021 event couldn’t have come sooner, showing that thankfully at least professional wrestling has a decent outlook heading into this year. Host Dexter Lumis opened tonight’s show atop the control booth, quite literally lighting up the Capitol Wrestling Center to initiate this stacked card. Showcasing some of NXT’s best, New Years Evil was highlighted by matchups like Damian Priest vs Karrion Kross and Rhea Ripley vs Raquel Gonzalez for a TakeOver-worthy lineup. Of course, the main event pitted NXT Champion Finn Balor against challenger Kyle O’Reilly in an anticipated rematch that didn’t disappoint with good signs ahead for NXT in 2021.

Kross takes control amidst this battle of giants, a rare description considering NXT’s usual height visual; these two competitors have badass aesthetics, and Scarlett standing ringside definitely helps too. Priest makes a comeback with his unique strikes and submissions, focusing on the injured left shoulder before trading blows. He eventually fights through his abdominal pain and delivers the Razor’s Edge and an eye-catching outside dive. However, Kross reverses his finisher and eventually Powerslams Priest onto the steel steps. The Doomsday Saito and brutal-looking running elbow gives Kross the definitive win. Tick tock, Kross has returned, and tick tock, Priest’s main-roster debut may become imminent.

Adam Cole and Roderick Strong face Breezango in the tournament’s first round, as the former team is interviewed backstage. Cole once again praises stablemate Kyle O’Reilly, the challenger in tonight’s main event. Perhaps his aggressive admiration is a red herring?

Commentary mentions how Metalik and Escobar were once former tag team partners in Mexico and have never wrestled against each other. The Cruiserweight Championship is arguably synonymous with dark-horse lucha libre matchups, and evidently the tradition continues here tonight. Metalik impresses with beautiful rope work and aerial maneuvers throughout, but Escobar suffocates the action with the finishing Phantom Driver for three. Despite Dorado taking out his ringside crew, Escobar remains champion after an exciting bout.

Finally, after months of buildup, the mysterious higher power controlling Xia Li and Boa appears! She sits lifeless atop the stage, on a throne, as Li makes her movie-like entrance. Li’s masked opponent is helpless against her kicking strikes and succumbs to an amazing Tornado Kick for three.

Tonight’s scheduled Fight Pit matchup between Tommaso Ciampa and Timothy Thatcher has been postponed since the latter has supposedly suffered an injury. General Manager William Regal announces the news.

“The Colossal” Bronson Reed is interviewed ringside and puts “this whole place on notice.” Also, his money’s on Rhea Ripley.

Women wrestling’s two future superstars bullhorn one another like hosses, legit and powerful, before Ripley introduces a kendo stick. She handcuffs Gonzalez to the barricade fencing, but the victim forcefully detaches herself; Gonzalez backdrops Ripley through the announce table and takes the action backstage where they crash into a closed glass door. Placing Gonzalez atop a catering table, Ripley Swantons off a locker before rival Dakota Kai interferes; Ripley legitimately stuffs her inside the locker, taking care of that problem. After two double-counts, Gonzalez slams Ripley through the stage and reappears before the ten-count. Gonzalez is Last Woman Standing with her biggest career-victory yet. As for Ripley, that’s just unfortunate.

A fantastic shot, North American Champion Johnny Gargano and wife Candice LeRae are escorted towards the arena by a legion of blaring police cars. The Floridians watching on must’ve either been awed or confused. Washington is somewhat farther North.

Accompanied by The Way, Gargano boasts about reversing the championship curse last week; annoying, quirky Gargano has really climaxed. Austin Theory reveals a special present for Gargano — a superhero painting of The Way, and the latter announces their entry into the Dusty Rhodes Classic. Ruining a rather wholesome family gathering, Shotzi Blackheart interrupts, shoots Theory’s nuts with her giant tank, and brawls with LeRae. Kushida takes out Gargano as host Dexter Lumis rings the bell creating an impromptu mixed tag match.

Johnny Gargano and Candice LeRae vs Kushida and Shotzi Blackheart

The Garganos are haplessly still dressed in regular clothing, although Johnny’s looking fly wearing his shiny white sneakers. What should be embarrassing is clearly normal since opponent Kushida sports his usual blue jeans. He attacks the champion’s arm, but intergender-wrestling legend Lerae interrupts to zero effect as Kushida and Blackheart clean house. Theory interferes but again gets nut-shotted before Kushida delivers a rollup for three. The Way has admittedly become a great comedy troupe.

A highly anticipated rematch here following the original’s match-of-the-year showdown. Once again, two acclaimed grapplers transition through some smooth chain-wrestling during the opening minutes. O’Reilly inches for a rope-break using his mouth, but shockingly Balor kicks the cable as revenge for breaking his jaw previously. Balor continues applying pressure until his opponent makes a comeback, eventually catching both a Triangle and Heel Hook. The champion applies a Crossface, hits a Slingblade and dropkick, and begins climbing the ropes. O’Reilly halts him, delivers a Superplex, and both escape the double pin. Balor escapes an armbar bloody and attacks the liver reminiscent of last time. He forces O’Reilly into tapping after targeting multiple body parts throughout this vicious bout.

O’Reilly is devastated as the Undisputed ERA surround him in support. Balor and his bloody mug close tonight’s show as still your reigning NXT Champion.

A great special that certainly delivered; Balor-O’Reilly is worth checking out. The remainder of this card was only average, although every match had something different to like. No major complaints here, as NXT starts 2021 on a good note.