AEW Dynamite: The band gets back together on Night 1 of New Year’s Smash 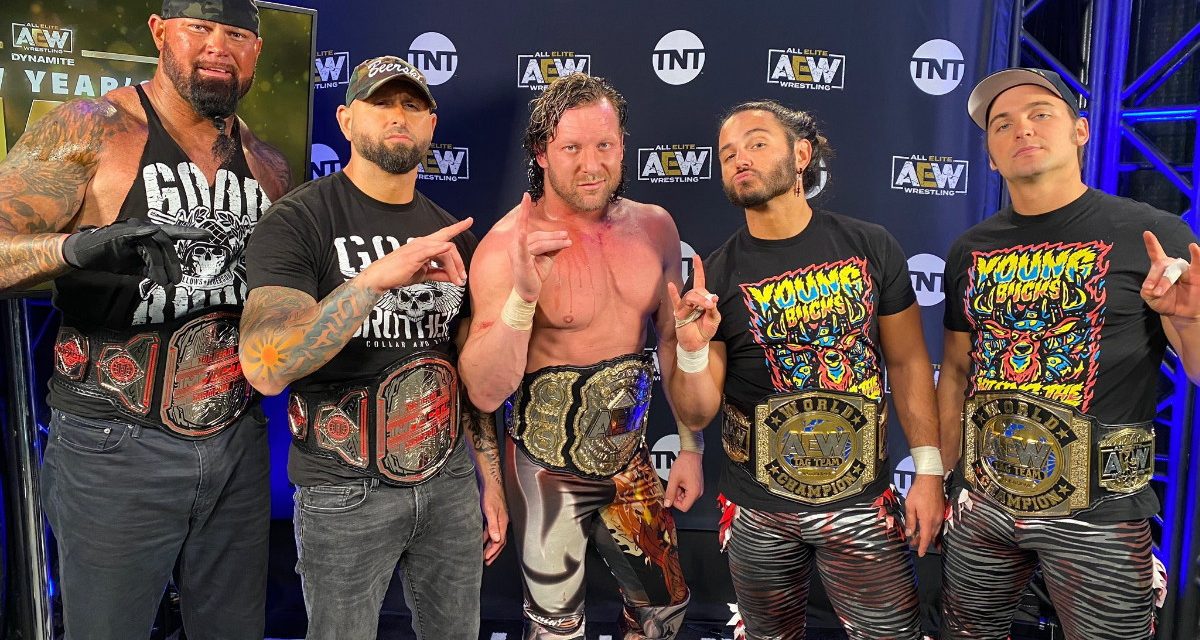 It’s really, really difficult to write about professional wrestling after what went down here in the United States today. But AEW Dynamite served as a welcome distraction during the pandemic throughout 2020, and it will have to fill the same role during a horrifying start to 2021. What’s in store? Well, it’s the first night of New Year’s Smash, which was delayed a week so that Dynamite could pay tribute to the late Brodie Lee. Chris Jericho is on guest commentary, and Snoop Dogg will also be on hand to plug his new TV show with Cody Rhodes, so all the ingredients are in place to forget real life for a while. Let’s fire it up.

Young Bucks and SCU vs. The Acclaimed and TH2

Hey sir or madam on the beep-out button: You done messed up and got the wrong word during Max Caster’s walkout rap, which he uses to take shots at John Cena and Snoop Dogg — maybe not the best idea considering Snoop will be in the house later. Christopher Daniels and Anthony Bowens execute the longest exchange of standing switches I’ve ever seen, so that’s something. The Fallen Angel gets the pinfall, but SCU confirms that the next time they lose as a tag team, they’re done forever. They want another shot at the Bucks’ titles before they go out, naturally, and the handshakes after the match suggest they will get it.

Sans belt but still sporting plenty of attitude, Jon Moxley makes his way from the side of the arena to the ring. He’s not going to do the whining and complaining deal, and he isn’t going to mess with Rey Fenix’s shot at the AEW Championship tonight, an opportunity Mox says Fenix has earned. But he is going to get even and then some, warning Omega that he won’t ever be safe. Jericho confirms Moxley means what he says, not that there was much doubt in my mind.

Backstage, Chuck Taylor and Orange Cassidy update us on Trent’s injury: torn pec, out for 4-5 months. Miro, Kip Sabian and Penelope Ford crash the interview, and the ensuing verbal sparring ends with Chuck agreeing to Miro’s stipulation that if the Best Man wins their bout next week, Chuck will have to serve as his young boy (a la Japanese wrestling rookies) until after the Ford-Sabian nuptials. Well, that’s different.

The other four members of the Inner Circle watch from the stage as their two big men go toe to toe. Wardlow literally lets his hair down, but he also takes flight impressively off the top rope. Hager catches him in a submission hold and their showdown continues. A minute or so later, Wardlow executes the F-10 (yes, it’s like an F-5 with one additional full rotation) and gets the win. Though Hager is clearly frustrated, he offers a fist bump afterward. Maybe they have buried the hatchet as Jericho hoped.

Private Party has the gin but not the juice. Never fear, nephew, Snoop Dogg has your back. But does Matt Hardy? He has contracts for them that he says will take care of all their concerns. In the latest shot at WWE and Vince McMahon’s stance on “third-party platforms,” Matt even tells the duo they can still keep their Twitch streams and social media monetization. What a guy. Isiah and Marq sign on the dotted line and say they’ll see Matt at dinner.

Sporting the new TNT Championship belt after the previous strap was given to Brodie Lee Jr. last week, Darby Allin heads down to join Tony Schivaone and Team Taz. There’s a weigh-in for next week, you see. Brian Cage weighs in at 272 pounds, “of solid muscle,” as Taz exclaims. And Allin? Well, considerably less: 170 pounds. Seriously, the beep-out person is asleep at the wheel tonight, failing to censor Allin as he says he’ll take on all of Team Taz now. But Darby won’t stand alone as the snow begins and Sting emerges once again. Taz and company must really be afraid of baseball bats. Is there a clinical term for irrational fear of baseball bats? Please holler at me on Twitter if you know the answer.

MJF goes to try calming down Hager in the locker room. It works, as Jake thanks him for the checkup. Also, Marko Stunt is going to take the place of Luchasaurus next Wednesday when Jurassic Express faces FTR, which I’m not sure will work out well. For Marko, that is.

Poor Serpentico. He’s just out beyond the barrier watching when he gets flattened by a Rhodes right hand intended for Sydal. One of the hazards of the job. Sydal is constantly mentioned by the announcers as someone simply in need of a signature win to begin a push, but something tells me he won’t find it tonight. And that instinct is correct. But right after the bell Luther and Serpentico rush in to beat on Cody, and after a hand from Sydal, Snoop goes up to the top turnbuckle. He does a top rope splash (sort of), and Rhodes counts a ceremonial three. As Excalibur says, “Got to give the people what they want.”

Say what you want about the lack of depth to AEW’s women’s division or the silliness of the long-reigning champ’s fear of Abadon’s gimmick — and I’ve said plenty about both in this space — but the promotion has done a good job of building this feud and making Abadon appear a very real threat to swipe the gold. Despite Shida nailing her with a kendo stick on the way in, Abadon drags the champion under the ring, bites her, and generally acts scary during the opening minutes. In the end, however, Shida prevails, perhaps overcoming some fears in the process. Team Taz, you could learn a lot from her and deal with that baseball bat thing.

In case you forgot, Tay Conti knows a lot of martial arts. She’ll also have the Dark Order behind her next week when she challenges Serena Deeb for the NWA strap.

I mentioned to my son that I hoped they would give these two gentlemen as much time as needed to work, and Excalibur assures TNT will hang with it if it runs past 10. The masked announcer also notes that Omega’s BFF Kota Ibushi just made history at Wrestle Kingdom and might make Kenny feel he has to keep pace here. That could mean something or just be a cool reference. When Fenix is in the zone, he is so much fun to watch, and Omega is … well, Omega. The only bummer here is that despite it looking like Fenix gets one shoulder up, he ends up getting pinned by the One-Winged Angel with about eight minutes left in the show’s normal running time. Was very enjoyable while it lasted, at least.

Don Callis grabs the microphone and praises his buddy while also alerting everyone to something terrible happening in the back. Turns out it’s the rest of Death Triangle getting a beatdown from Eddie Kington’s family. Omega sets his sights on ending Fenix’s career, but are halted by Moxley, who is wielding a barbed wire baseball bat. In turn, they’re neutralized by two of Omega’s friends, Impact’s Good Brothers, Gallows and Anderson. Though bloodied, Omega can’t hide his glee at getting a chance for some payback to Mox with the bat. A number of midcarders storm the ring from different directions, but of course, they’re midcarders for a reason. “Whose side are you on, anyway?” Schiavone says to Jericho, and Kenny says into the camera, “You made me flip the switch.” Indeed, Kenny, I don’t know nobody else who’s doing this. The Young Bucks finally stop the onslaught, but they superkick Griff Garrison and Brian Pillman Jr. so it’s tough to tell where their loyalties lie. We find out in a second: Omega and the Good Brothers throw up the Bullet Club/Wolfpac/other wrestling factions hand sign, and the Bucks soon join them.

That was certainly an ending that’ll have the internets talking again. See you in seven for Night 2 of New Year’s Smash!

Despite a few uneven moments, this was a fun ride throughout and exactly what it should have been. Omega-Fenix could have been a tad longer, but that’s a small nitpick and understandable given the conclusion of the show. Count me intrigued at how long they can keep the cross-promotion angle going, but it’s definitely not going away over the next week or two.