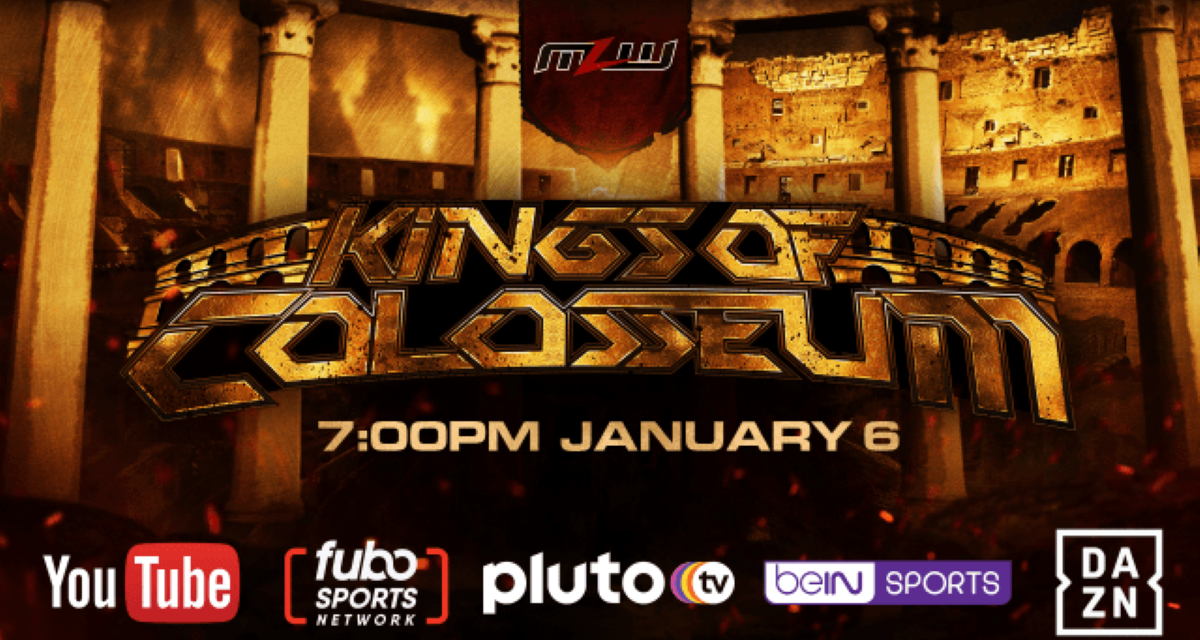 Major League Wrestling (MLW) recently restarted tapings back in November 2020, and they wasted no time getting back to the action.  As a thank you to its fans, MLW owner Court Bauer announced their signature Kings of Colosseum event (which was supposed to be a PPV) will be a free televised event on various platforms like Pluto.TV, YouTube, DAZN, and so on.

Now some of you checking this who haven’t seen MLW’s FUSION Show (which I recommend getting caught up on their YouTube Channel), might feel a bit lost.  Well, as I am a Lucid Luchador (and thanks to the magic of the interwebs), this will be a different format than my previous recaps.  Since MLW, like other promotions that don’t have a Thunderdome or a Daily’s Place, had halted the actions in the middle of 2020 and just barely restarted, what I will do is give a brief recap of what happened with respect to the scheduled matches on the card, and then follow up with the action in the ring.

With that, let’s start the show.

Live from the GILT Nightclub in Orlando, FL.  Your Commentators Rich Bocchini and Jared St. Laurent have the call.

Show starts with a recap of Krügger and Hammerstone’s burgeoning feud, but we’ll cover that later.  For now, let’s go to the …

The current tag champs, Marshall and Ross Von Erich of the storied Von Erich family had garnered the eye of the infamous Col. Robert Parker. Attempting to solicit their services Parker sent his girlfriend/southern belle Aria Blake as a “hospitality envoy” of sorts. Of course, the Von Erich’s spurned her charms, and now the returning Dirty Blonds tag team (consisting of Leo Brian and Michael Patrick) signed to Parker’s Stud Stable, and are now challenging the Von Erich’s in a Bunkhouse match for the tag straps.

The Von Erichs come to the ring in jeans, and Bocchini says “it’s a donnybrook” from the moment they part the ropes.  The action spills out all over the arena (club) and no piece of patio furniture is spared from these four hosses.  They finally get back in to the ring (because, y’know, you gotta score a pin in the ring to win a bunkhouse match), and Aria gets a low blow to Ross’s little Von Erich’s to slow the momentum, but it’s all for naught.  Patrick gets caught in the famed Von Erich Iron Claw/back body drop combo finisher, and they retain the straps.

Post-match, Ross and Marshall Von Erich state they signed an open contract to take on all comers who challenge for the belts.  Should be interesting down the road.

We then go to recaps of the signature Opera Cup 2020 tournament, that had a great turn out between the finalists Low-Ki and “Filthy” Tom Lawlor.  In a miscalculation by the Lone Wolff of Brooklyn, Low-Ki’s somersault kick to the corner nailed Lawlor, but the momentum dropped all Lawlor’s dead weight into a pinning predicament that had Lawlor in a prime pinning position to win the vaunted Cup.  Since the match, Lawlor cuts a promo that he’s ready to journey to Filthy Island.  Kinda curious what the tourism would be like there, but then again there are worse places to visit in the world.  But enough about Provo, UT.

Next we get both Lio Rush and Myron Reed cut promos and hyping up their match tonight.

We then head to the MLW Top Ten List (sponsored by Pro Wrestling Illustrated), showing who’s in line for the MLW Heavyweight Championship, and they are:

What say we get to the next match, eh?

Jordan Oliver, along with Myron Reed and Kotto Brazil of the Injustice faction (no, not the lame DC Comics, Mortal Kombat-lite game. Try to keep up!) got Pearl Harbored by the faction CONTRA Unit during the MLW/AAA super show back around March/April of 2020 (think of CONTRA Unit as a more successful Retribution. Way, way more successful!). Because of that heinous douchery, Brazil had been forced out of action and out of MLW. Since then, on MLW’s Pulp FUSION recaps during the pandemic, Oliver had bulked up to be considered a heavyweight contender, and attempted to seek revenge against CONTRA, sneak attacking members at any chance possible. Now he has his sights set on CONTRA member Simon Gotch (yes, the erstwhile VaudeVillain himself) to exact some true justice.

None. It’s postponed because Gotch is nowhere to be found. 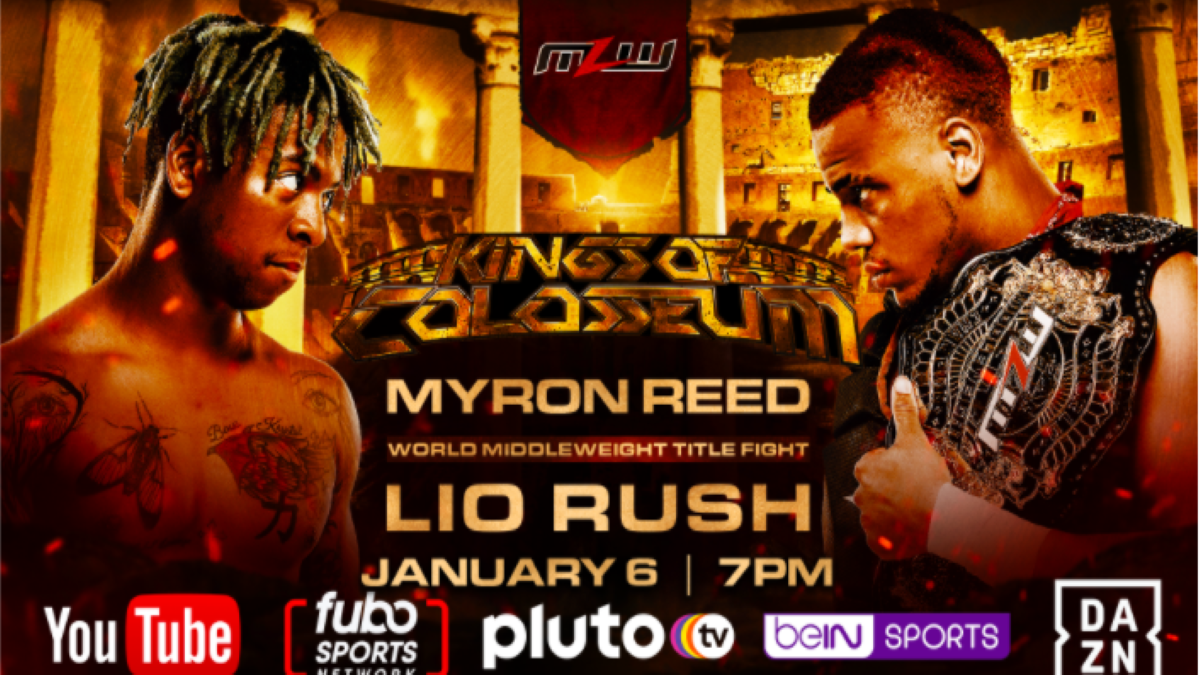 Since defeating Teddy Hart in November 2019 for the Middleweight title, the brash upstart from Louisville, KY has been saying over and over he was “the young GOAT” of MLW. A heated feud between Brian Pillman, Jr. and the leader of Injustice boiled over before and during the pandemic, with each issuing challenges to the other, until the MLW restart in November 2020 culminated into a Match of the Year candidate between the two middleweights, with Reed getting the decisive victory over Pillman to cement his legacy. Since moving on from that match, Reed has been challenging any other big names to step up…like The Man of the Hour, Lio Rush. Rush, at first, refused to pander to Reed’s mind games but finally relented in a title match.

Chain wrestling to start, but neither get the advantage.  While Rush has the veteran moves, the GOAT shows he’s just as good.  Soon, Rush take controls with his high flying moves to the outside, and sends Reed back in to take care of business.  Quick suplex by Rush gets a two count.  Reed tries to overcome, but the MOTH shows more innovative offense like a 540 kick to knock Reed silly.  Reed comes back with his own offense turning Rush inside out with a clothesline, then a rope assisted Codebreaker.  He punctuates with a wonderful corkscrew uppercut but gets only a two count. For his troubles.  Reed goes outside for a big move, but Rush rolls out. Reed gets annoyed by this and goes after Rush, but gets suckered in by a kick as he attempts to part the ropes.  Rush back in control, delivers a moonsault to the outside and a blindingly fast twisting facebuster, but still gets a two count.

Rush checks the time on his wrist and realizes it’s a quarter to the Final Hour (must be a time zone thing), but as he tries to get Reed ready to finish him off, Reed shoots the ropes and then both shoot the ropes, and Rush gets countered into a modified cutter by Reed, but it still garners for him a two count.  Near the end saw Reed deliver a sick move in the form of an inside-out cutter to Rush from the apron to the floor.  Reed gets fired up by this and tries to finish off Rush.  Rush answers with his bottom rope-assisted Ace Crusher.  Rush goes up top, and a Final Hour split legged MOTH Splash, and it’s over in one, two, three.

Post-match, Rush asks what did you expect, since he is a moneyweight champ.

We try to go back where Alicia Atout goes to interview your boy Hammerstone, but the “feed” cuts to CONTRA UNIT’s own Svengali, Josef Samael, broadcasting from the “Arabian Peninsula, promising a new breed of soldier.  Hail Contra.

Returning to commentary, where Selina De La Renta stops by and says next week, she will executive produce the next FUSION show, and says she will get L.A.Park’s sons a title shot w/ the Von Erich’s, and Tom Lawlor will special referee the match.

Back to Myron Reed who cuts a promo that he lost, but he will get the middleweight belt back, because that’s justice. Next thing you know, CONTRA Unit with Fatu, the no longer missing Gotch, and Daivari (?!) beat down the members of Injustice handedly.  I’m curious how this will play out down the road. 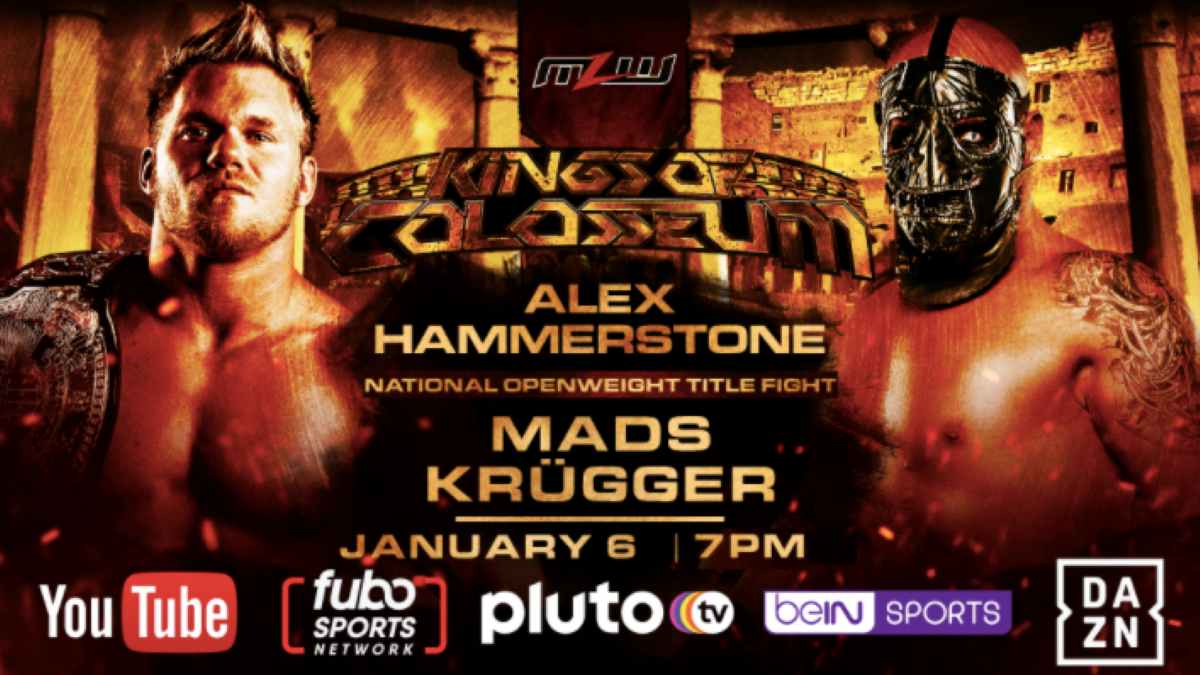 Currently the reigning Openweight champ and ranked #1 in the MLW Top Ten to challenge MLW Heavyweight Champion and CONTRA member Jacob Fatu, your boy Hammerstone staked his claim after Fatu defeated challenger Davey Boy Smith, Jr. in a hard hitting title bout. Before Fatu and Hammerstone could come to blows, in came the debut of the newest member; the “Black Hand of CONTRA”, Mads Krügger, who laid out Hammerstone in convincing fashion. Since the restart, Krügger has proven to be an unstoppable monster that makes Bane look like Baby Yoda, but Hammerstone ain’t having any of that crap. So he’s putting up the title against the Black Hand himself.

No bell, as Hammerstone takes the fight to Krügger.  Don’t expect any finesse, as this is just a straight up power vs. power match, with Krügger taking early advantage.  Your Boy Hammerstone has some tricks up his sleeve as he hits a convincing Belly to Belly suplex, but he can’t follow up since he’s still recovering from the effects of Mads’ initial beat down.  Pump handle slam by Hammerstone, he goes for a pin and gets a one count.  Even Hammerstone can’t believe it.  Heavy hands by both, and then the action out to the ring again.  Any semblance of controls goes out the window, and the ref starts counting, but neither competitor cares, as they’re both bent on a bit of the ultraviolence.  Both men are still brawling up the ramp as the ref calls for the DQ and the show runs out of time.

This was to be billed as a major showcase to be shown free on TV platforms, and it felt just like a TV match, which isn't saying much. It wasn't a bad thing, but it didn't feel like it was that grand either, save for the Rush/Reed match. I'd say to check out their YouTube channel and catch up on the matches like the Opera Cup if you're interested. It'll be fascinating to see what other ways they make a bigger fanfare down the road