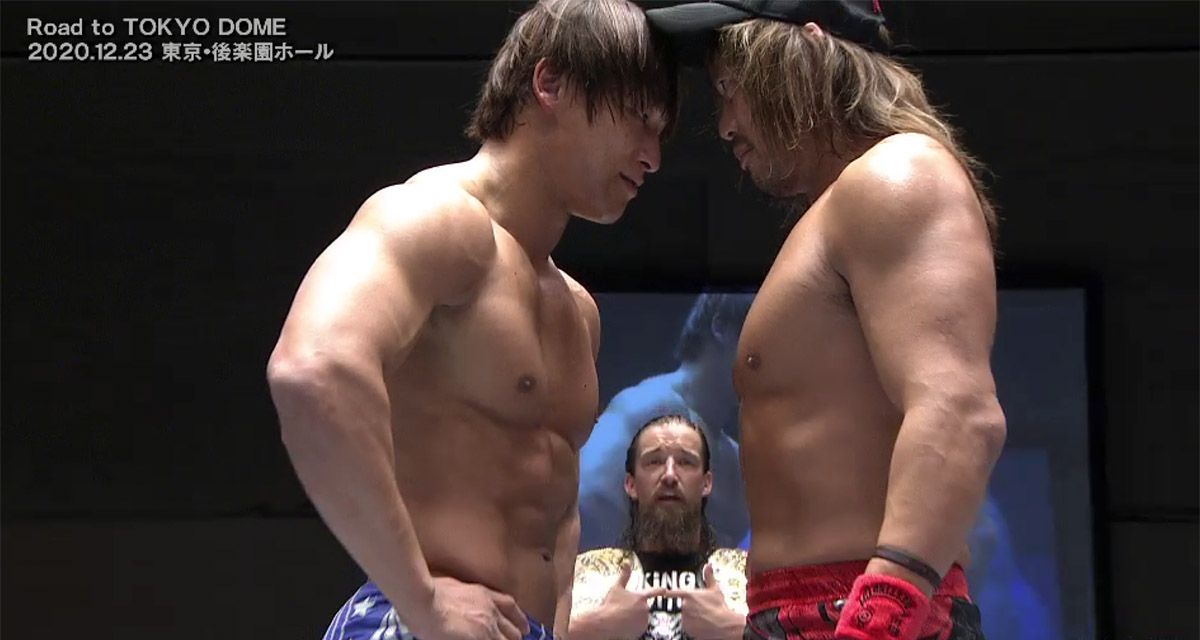 Wrestle Kingdom is all about ‘Switchblade’ Jay White, at least according to Jay White.

After crashing their interview time at the Wrestle Kingdom press conference earlier today White came down to the ring after Sho and Kota Ibushi defeated Bushi and Tetsuya Naito at the final night of Road to Tokyo Dome.

“Neither of you matter. This isn’t about either one of you. This is about the man who matters most and that’s me,” said White as Naito and Ibushi stood in the ring nose to nose.

“It doesn’t matter which one of you it is. You will breath with the Switchblade,” said White claiming a new era was on the horizon for NJPW after he wins the IWGP Heavyweight and the IWGP Intercontinental Championships from either Naito or Ibushi.

Naito and Ibushi will meet for the titles on night one of Wrestle Kingdom with the winner to face White on night two.

Fale and Yano’s showdown was a Bodyslam, Last Corner Pad Match. The first one to body slam the other or to remove the final turnbuckle pad would be declared the winner and King of Pro-Wrestling Champion for 2020.

Fale tries to slam Yano but Yano holds on for all he is worth. Fale tears off Yano’s robe to find he is wearing a huge, heavy knapsack making him harder to slam. Sneaky Yano.

Fale opens the sack to find a bag of sand inside. Fale throws it at Yano but Yano rolls out of the way and out of the ring. As the official is distracted by the discovery Chase Owens mauls Yano on the floor. Yano reverses an Irish Whip though hurling Owens into the ring barricade.

Yano sprays his sanitizer into Fale’s face. With Fale incapacitated, Yano races to undo all of the turnbuckles. He gets one undone as Fale roars back with clubbing blows. Yano charges at Fale as they both get back into the ring. Fale sends Yano crashing down with a shoulder tackle. Fale goes for another slam. Yano uses the buckle he tore off to block Fale. An angry Fale smashes the turnbuckle pad over Yano’s back while the official attempts to disarm him. Yano tears off another buckle as Fale and the official struggle and argue. Fale charges into an exposed buckle. Yano hits him with a pad in the head.

Yano avoids being slammed by Fale, rushes to the other side of the ring to tear down another turnbuckle pad. Only one more to go.

Yano holds onto the top rope so he cannot be slammed. Fale punches Yano into the mat, leaves Yano lying there so he can go for the final turnbuckle pad. Yano dodges and Fale charges into an exposed pad yet again. Yano starts undoing the final pad. Chase Owens cuts him off with some haymakers to the head. Owens ties the buckle back on, inserting some knots into the equation. 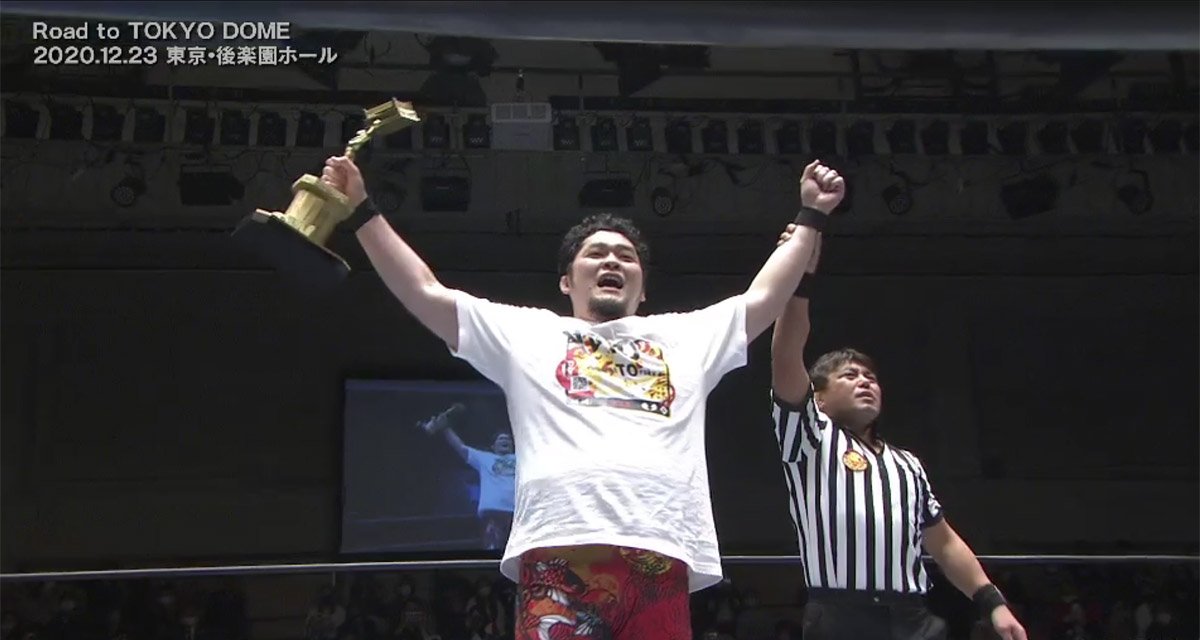 Toru Yano is the first ever King of Pro-Wrestling in NJPW. Courtesy: NJPW.

The final Wrestle Kingdom 15 card is: 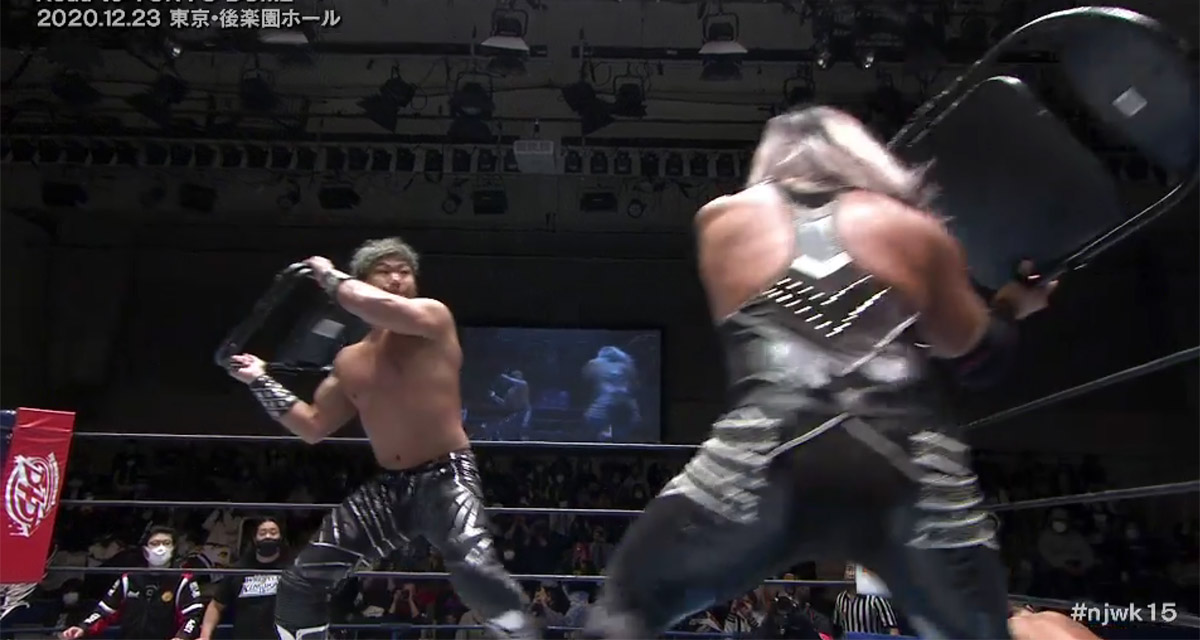 Yeah, Sanada and Evil really don’t like each other any more. Courtesy: NJPW.

Takagi gets the one, two, three on Togo with the Pumping Bomber. Evil hits Hiromu and Takagi with a steel chair. Sanada brings one of his own into the ring. Evil and Sanada have a chair-swinging duel. When that doesn’t get them anywhere the former friends dispense with the chairs and just pummel each other all the way to the back.

White and Kenta joke about why Kojima is subbing for Juice Robinson. White reverses Henare’s Rock Bottom into a Dragon Suplex. White pins Henare with Bladerunner. 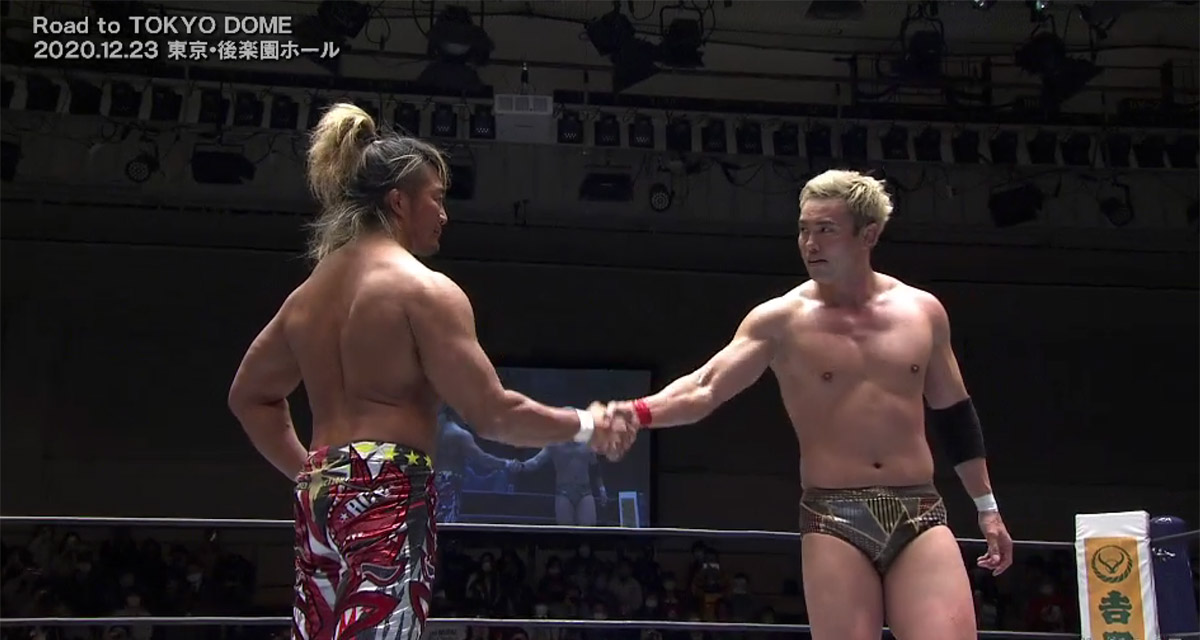 Tanahashi and Okada show their respect for each other. Courtesy: NJPW.

Following a head butt battle with Honma, Cobb pins him with a Tour of the Islands. Empire looks to inflict more damage to The Ace’s knee. Okada fights them all off until the numbers become too much. Ospreay knocks Okada out with rolling elbow smash. While Empire stands over Okada and yacks on Tanahashi returns with a steel chair nailing all of them. He grants Khan the most attention though smashing a chair over his back seven times before the Young Lions are able to stop him.

Sho gets the victory for his team with a Shock Arrow on Bushi.