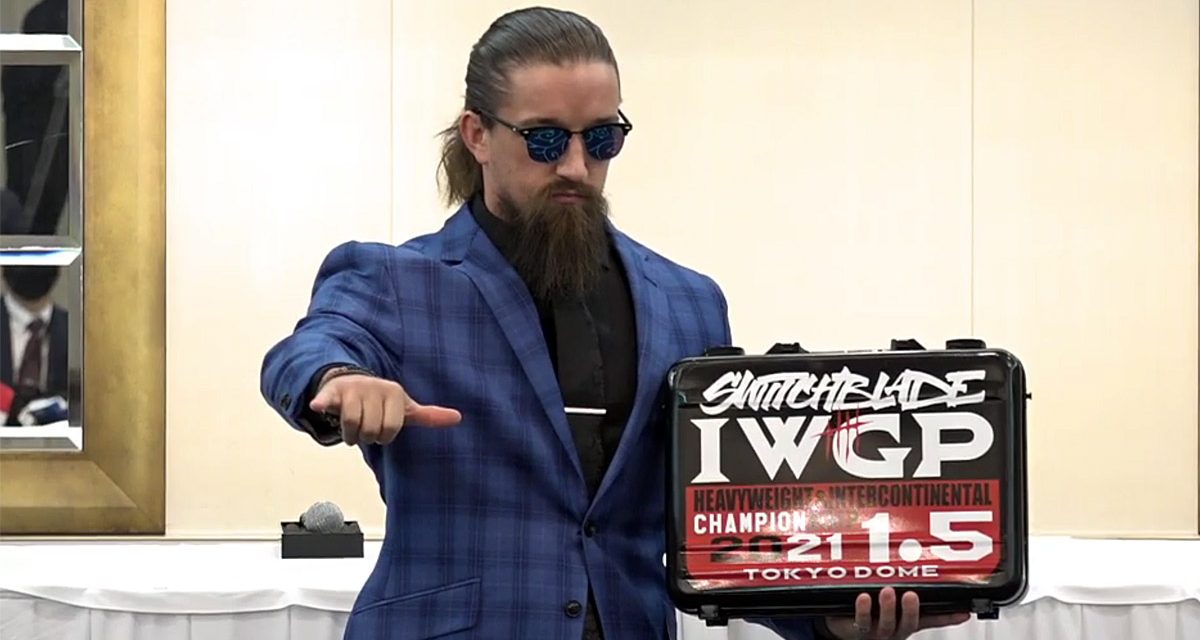 White, who will challenge the winner of Naito and Ibushi for both the IWGP Heavyweight and the IWGP Intercontinental Championships, was the star of the event which hyped New Japan’s biggest card of the year coming up on January 4th and 5th.

Out of nowhere, White took over the questioning of Naito and Ibushi putting both men in the hot seat. 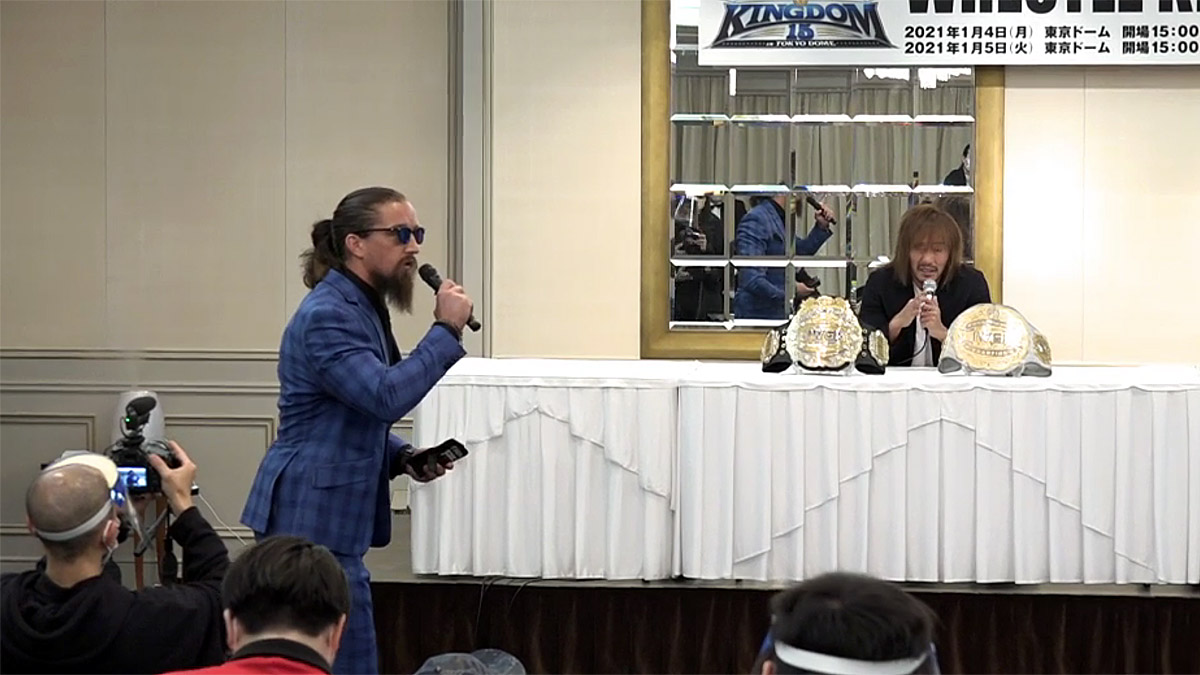 White asked them who they thought was a better Young Lion Yota Tsuji or Yuya Uemura before peppering them with ridicule.

“How many times in a row have you lost to Jay White?” White asked Ibushi.

“What are you doing here?” replied a frustrated Ibushi.

“Interviewing you, asking questions. That was a wrong answer. The correct answer is three,” laughed White.

“Do you still feel embarrassed, ashamed and disappointed in yourself that you are the first person ever to lose the briefcase?” said White continuing to grill Ibushi.

“I have no regrets and feel no embarrassment at all,” Ibushi answered.

“Why do you both suck so much and why is Jay White so much better than both of you?” White inquired finishing up the interview.

“It is a mystery because you both suck a lot,” said White answering his own question.

At the end of the presser, White returned to speak to the press alone.

“I feel strange by myself. I need some company,” he said inviting Yota Tsuji to sit beside him.

As the main event contract holder, White revealed that one of his Wrestle Kingdom requests was that Red Shoes not officiate his match against either Naito or Ibushi on night two.

“Red Shoes cannot be trusted,” said White as he offered Tsuji a bottle of water.

White then proceeded to interview himself.

“On night two I am going to walk out with both of those belts. It doesn’t matter if it is Naito or Ibushi,” he said answering his own question.

White then asked Tsuji who would win between Jay White and Naito or Ibushi. 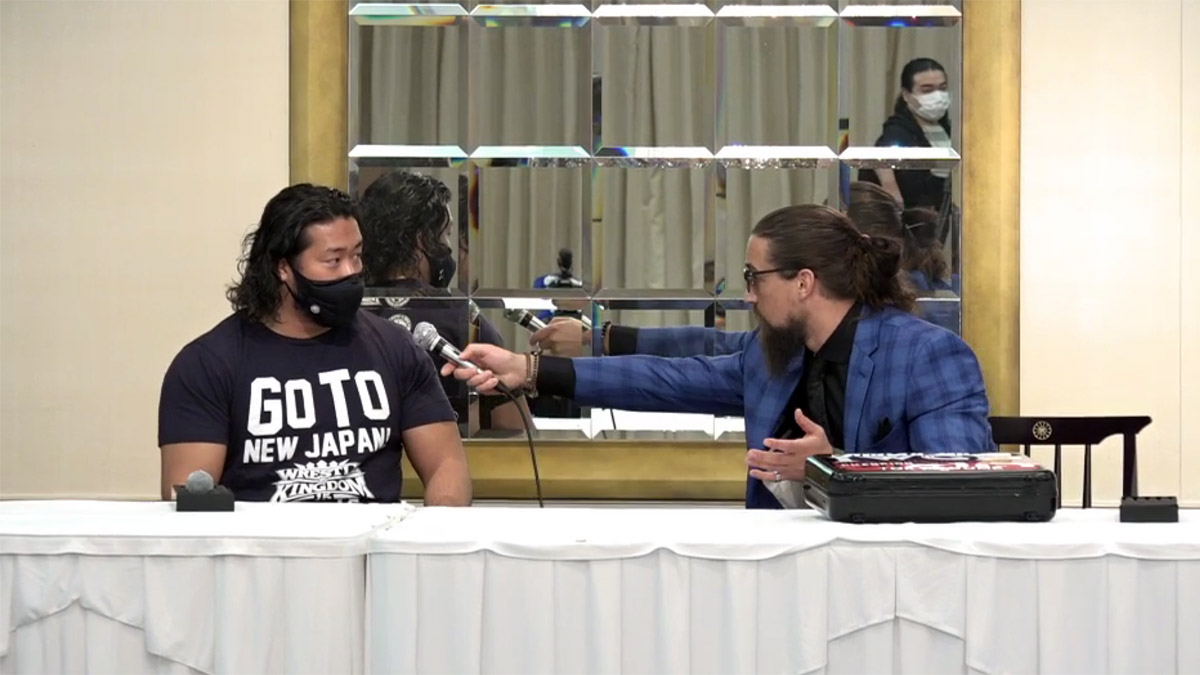 The tension between IWGP Tag Team Champions the Dangerous Tekkers (Taichi and Zack Sabre Jr.) and their Wrestle Kingdom challengers Bullet Club’s Guerrillas of Destiny (Tama Tonga and Tanga Loa) almost boiled over when the Guerrillas wouldn’t let the Tekkers join them on stage, standing in their way. 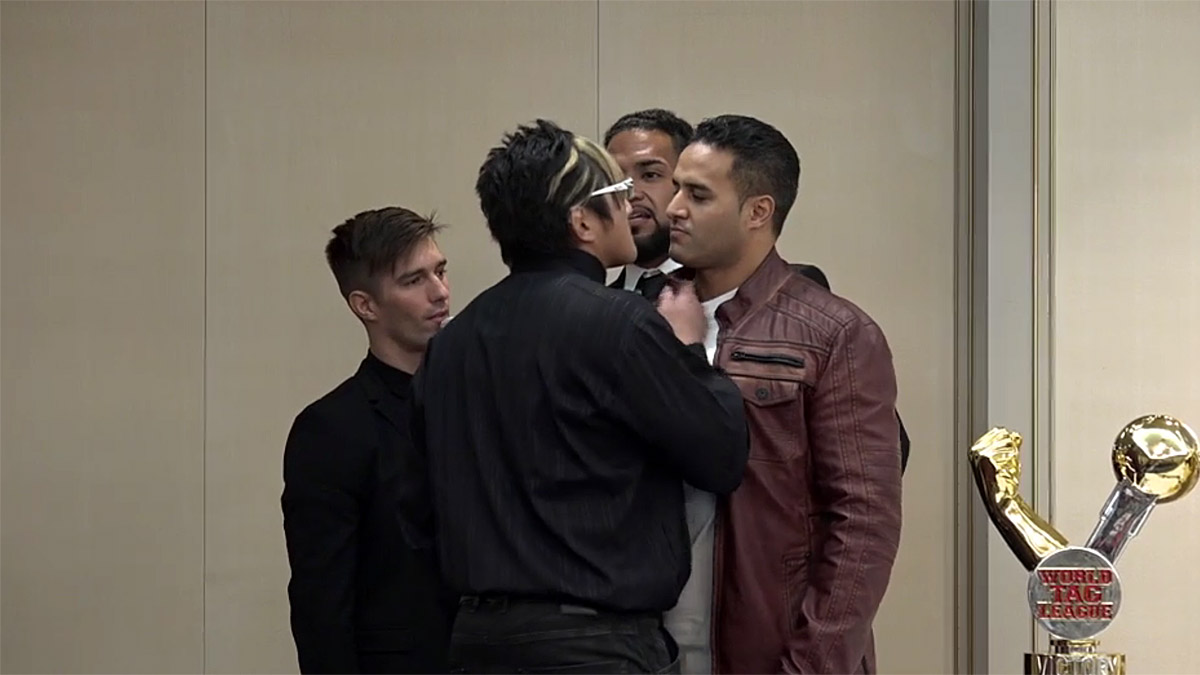 “At Wrestle Kingdom it will be just like this, us standing over you,” said Tanga Loa.

“Until you become the franchise, you can shut your mouth! We are pillars of the company. Pillars of the tag team division!” said Tama Tonga.

“I just see two pillocks up on that stage,” said Zack Sabre Jr. as he and Taichi walked off with their belts.

Since most of the responses by the Japanese wrestlers were not translated we don’t know what his reply was but Will Ospreay had this to say to his former mentor Kazuchika Okada.

“The most essential part of New Japan’s future success is right here. The Commonwealth Kingpin is right here and he has the biggest match of his entire life and this little twat is talking about IWGP Championship matches. He is looking past me. Of course he will be handed another championship match, he is Okada. I don’t think you realize geezer that you are getting finished at the Tokyo Dome,” said Ospreay before they posed for the press.

Unlike Okada, we did get a translation for the back and forth between NEVER Openweight Champion Shingo Takagi and challenger Jeff Cobb.

Cobb explained to everyone why he turned heel and joined The Empire in NJPW.

“What has happy go lucky Jeff Cobb done for me and my career here at New Japan? Absolutely nothing! Two years I was stuck with a stinky midget who couldn’t carry my bags,” said Cobb of his former tag team partner Michael Elgin, we would assume. 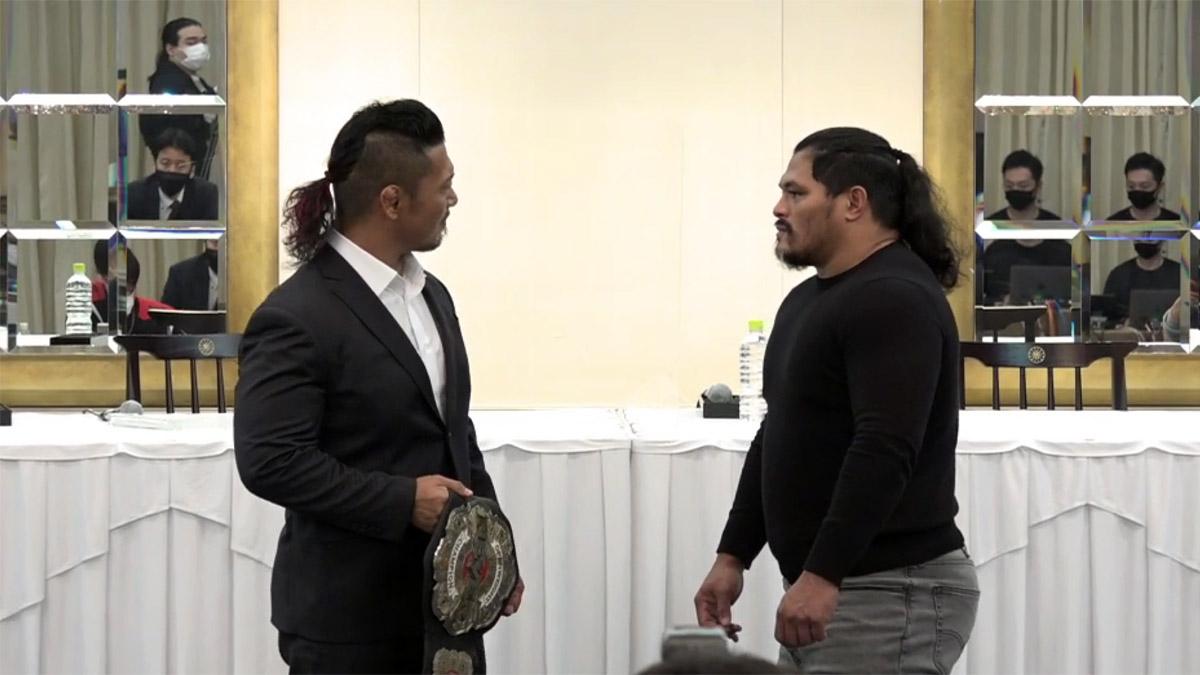 Cobb made it clear to Takagi that he was going to be victorious at Wrestle Kingdom.

“On January 5th, your reign is over! Shingo, are you prepared to die for that championship?” asked Cobb.

Takagi nodded in the affirmative.

“On January 5th, I will prevail because your power and skill won’t work in the ring against me because I am fighting with all of my spirit,” answered Takagi.

Hiromu Takahashi filled in for El Phantasmo during the press conference. Hiromu wore an El Phantasmo mask and mocked him on the microphone. 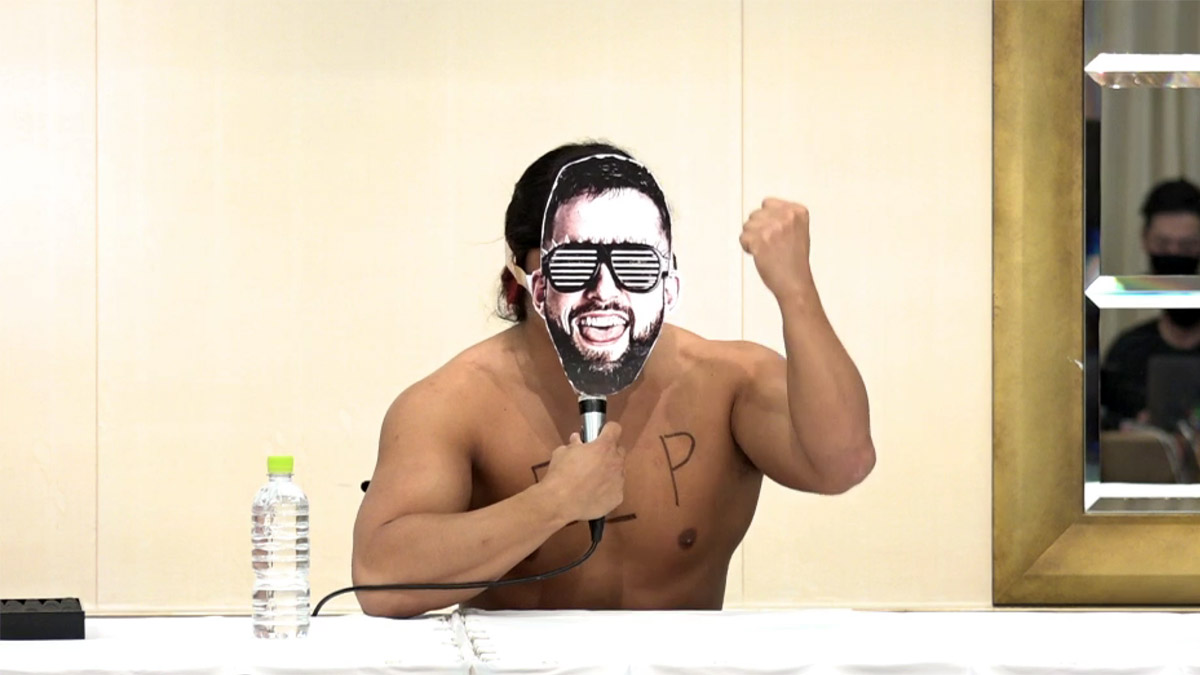 “Hello. I am El Phantasmo. Mr. Hiromu is number one. I can beat him 100 per cent but I am excited! Mr. Hiromu, I love you!” said Hiromu as Phantasmo.

Before the press conference NJPW announced that Juice Robinson has sustained a fractured orbital bone and would be missing not only today’s final Road to Tokyo Dome show but also Wrestle Kingdom where he was scheduled to face Kenta.

The final Wrestle Kingdom 15 card is: