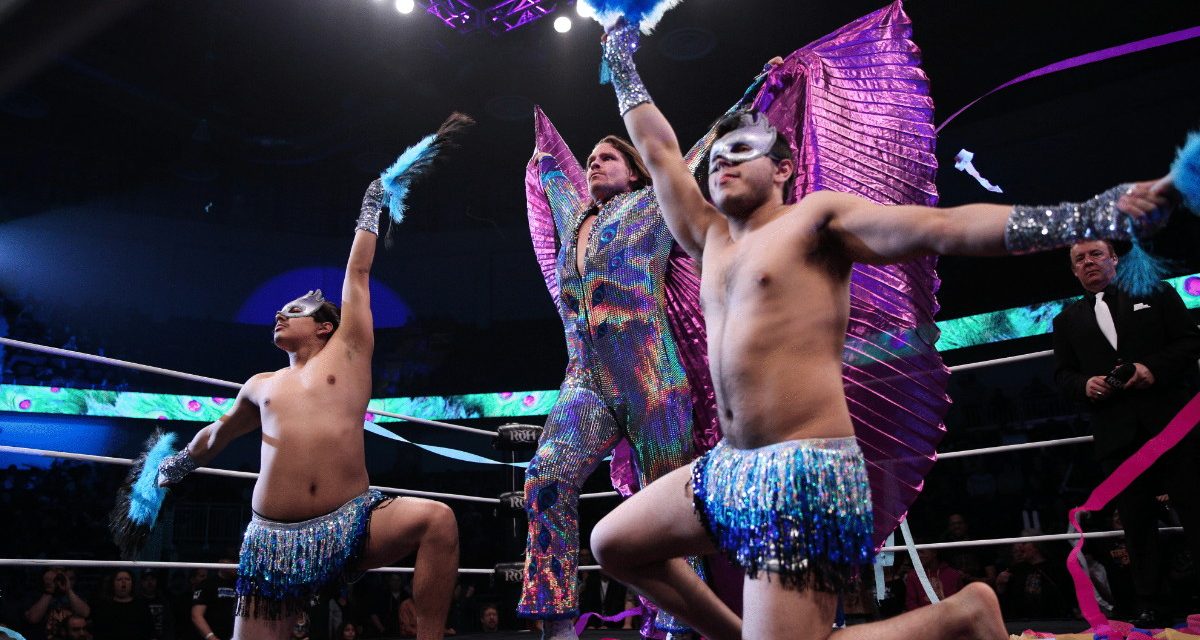 Those turtlenecks.  That cape.  Those jumpsuits.  The Boys.  Outside of Freddie Mercury or Gorgeous George there has never been as flamboyant an entertainer or wrestler in recent years as Dalton Castle.  From 2015 when he emerged as a Top Prospect in Ring Of Honor, Castle is as big a name and as flashy as they come with solid technical skills to match.  Regardless of the situation, whether in the ring capturing titles to hamming it up with the aforementioned Boys, one things has remained constant with the Party Peacock is the roar and adulation of the crowd.

That is, until recently. The pandemic has certainly altered how he views the pro wrestling business.

Part of Castle seeing things a whole lot differently is the fact that there are no crowds right now at ROH events.

“Well, I became a pro wrestler to be a performer. I wanted to be in front of the audience and entertain,” he explained. “The draw to it is the theatrics, in the environment of everything I love about being at a wrestling event and now I’m doing my part in front of nobody, which changes everything.”

Before the pandemic shut everything down Castle was working with Joe Hendry in a rivalry/tag-team that looked like the beginning of a new tag faction for ROH.  “Well, I don’t know if we had real concrete plans for Joe and I at that point,” Castle points out.  “I think the two of us were still kind of feeling each other out and learning one another’s moves, so to speak where we’ve we’re really kind of learning how to bond.”

He and Hendry had their struggles accepting each other but “the more we found friction between us, the more we realized there’s a lot of similarities between us.  So it just started making sense that the partnership would equal something very, very strong and beneficial to not just us as a as competitors and performers but to the company as well.”

Of course, COVID-19 put the kibosh on that as well as a lot of other wrestlers who didn’t have the benefit of a ThunderDome or an open air amphitheater  But that hasn’t stopped the Party Peacock, as he developed new segments during that time such as Dalton’s Castle on ROH’s YouTube channel that featured himself, his cats and Joe Hendry. Recently he did The Grigio Guys on his YouTube channel featuring Matt Taven, RJ City and Colin Delany.

Regarding the Dalton’s Castle segment, it started when the ROH wrestlers were stuck at home and there was no indication when they could return back to the ring.

“We started a series of at home episodes highlighting different wrestlers on the roster.  And when it was my turn to do it, I guess I went a little above and beyond what was expected with the amount of footage I sent them and someone had the idea of,” he said.

Castle even has a theory about why the segments really caught on.

“One of our producers, his mom saw the segments that I did for my episode and suggested it to him and that’s kind of how the idea for [Dalton’s] Castle came up the ladder. Somebody’s mom said it would be a good idea and they were right,” he laughed.

As for doing shows like this, this wasn’t Castle’s first time.

“I did a lot of sketch and television production in college and just with my friends. It was my one of my favorite things to do before I was in a wrestling ring, just making silly videos,” he said.

Castle even noted that what he did can also translate to the world of professional wrestling in that it’s no different from doing backstage interviews and promos.

“They’re really just little sketches. So I mean, it [COVID] took the wrestling away from us. That doesn’t mean we have to stop being entertaining,” said Dalton.

And Dalton’s Castle kept up the entertainment during the segments when he interacted with Hendry, although not without some difficulty.

“It didn’t seem that hard once we had the right idea to do but I mean, when the guy is in Tennessee and the other one is in Scotland it’s hard to be on the same page. It’s also hard to do normal scenes. So, you really relying on what you have available,” Dalton noted.

In short, even wrestlers have troublesome Zoom calls too.

While Castle hasn’t been able to interact with fans at events he has managed to find another way to connect with them. Castle sells Cameos on the popular app that allows celebrities to send personalized messages to fans.

“I feel like a real connection to them that way.  It’s because I’m getting to learn a little bit about them. And then …I have to put my self aside, because this is now it’s either a gift or a message for somebody that they care about. Now I feel like I’m doing something for the people instead of fulfilling my own personal needs to perform,” he said.

Castle noted that fan interplay has been missing since ROH has re-opened without an audience.

“I can’t see on the other side of the camera who’s smiling or having fun when they’re in the crowd. I could see them having fun in the joint so that’s a group effort. Now I’m wrestling alone. It’s just for me,” he explained.

But with Cameo, Castle managed a little of a connection. He elaborated that “I know it’s going directly to somebody that it’s gonna make their day, and that’s kind of helped a little bit. It’s infrequent but at least over the few months that’s kind of been fan interaction.” 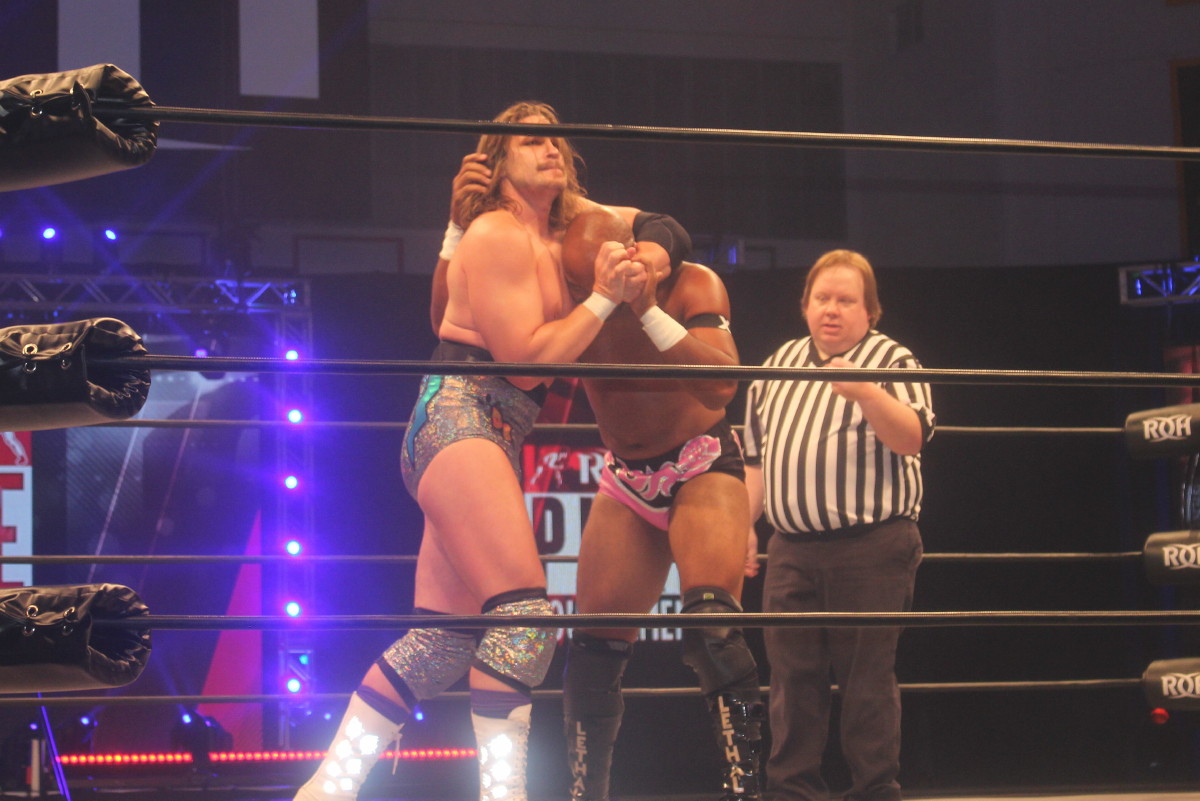 It is a different world than when the year started in 2020 and how organizations like ROH have handled the pandemic.  “I will say with the most positive note that the way Ring of Honor has handled this pandemic has been superb”, Castle said.   “The fact that we took the time to wait before we formulated a plan before we went back to filming, to protect the performers that we have, and the staff we have our crew and everybody… I thought, that very smart move and the program that we’re putting out the product, I think looks fantastic.”  And while the action on TV has been fantastic, there is a different side of the Party Peacock that I pointed out was a little more aggressive…a pissed off Peacock, to say the least, during his first round loss in the Pure title tournament to Jay Lethal, and recently in a match against Brody King to see who would challenge Rush for the ROH World Championship.  “Yeah… I don’t know if I have any real explanation on why that’s kind of happening to me”, Castle noted.  “I suppose there’s, uh, there’s a change in inside me that’s happened over the time and we’ve had a lot of time to sit home and reflect and think, and I’ve just watched the world go through a lot of things.”

“So it’s like my insides and my emotions are turning into this weird fire of uncertainty and I don’t know how to deal with it,” he said.

Wrestling has been an escape for Castle as well as for the fans.

“It’s an opportunity to put on the jumpsuit, come out with the Boys, entertain the fans and make them laugh and we have a great time together,” he said proudly.

“Now I just have one focus,” Castle said “and it’s the match itself and emotions I wanna go through to become a victor. And I guess without the fans, you’re seeing a lot more aggression out of me because they’re….I don’t wanna say ‘distraction.’  That isn’t the right word but I guess my focus was spread around when we had people in the in the audience and now they’re not there.”

With Final Battle, ROH’s first pay-per-view since the pandemic hit, looks to be a major show for all involved.  Yet, one can’t help but note that Castle’s name isn’t on the marquee.  “I was trying to avoid it because I feel like it brings up a lot of anger in me,” Castle noted.  That’s kind of the theme. If you go back and look through all of 2020 or even 2019, you don’t see Dalton Castle’s name or face on a lot of Ring of Honor advertisements, which I find very confusing.”  Castle noted that not having him be on Final Battle on the poster or having a match.

“It hurts the ego a little bit. At the same time, I don’t exactly have a focus on what I want out of this. So I mean, I guess I’m the one to blame. If I’m not in pursuit or working hard towards one thing because I’m tied up being too busy doing other things. I’m starting to learn that there’s a lot more in my life than wrestling and it’s taking up a lot of time,” he said.

So does that mean the Party Peacock won’t be at Final Battle?

“I’m gonna do everything I can this week to make sure I get in that ring or I find a match that’s suitable for me or find a way or even find a way just to be a part of the pay-per view. One way of another,” he promised.

TOP PHOTO: Dalton Castle and The Boys. Photo by Ring of Honor