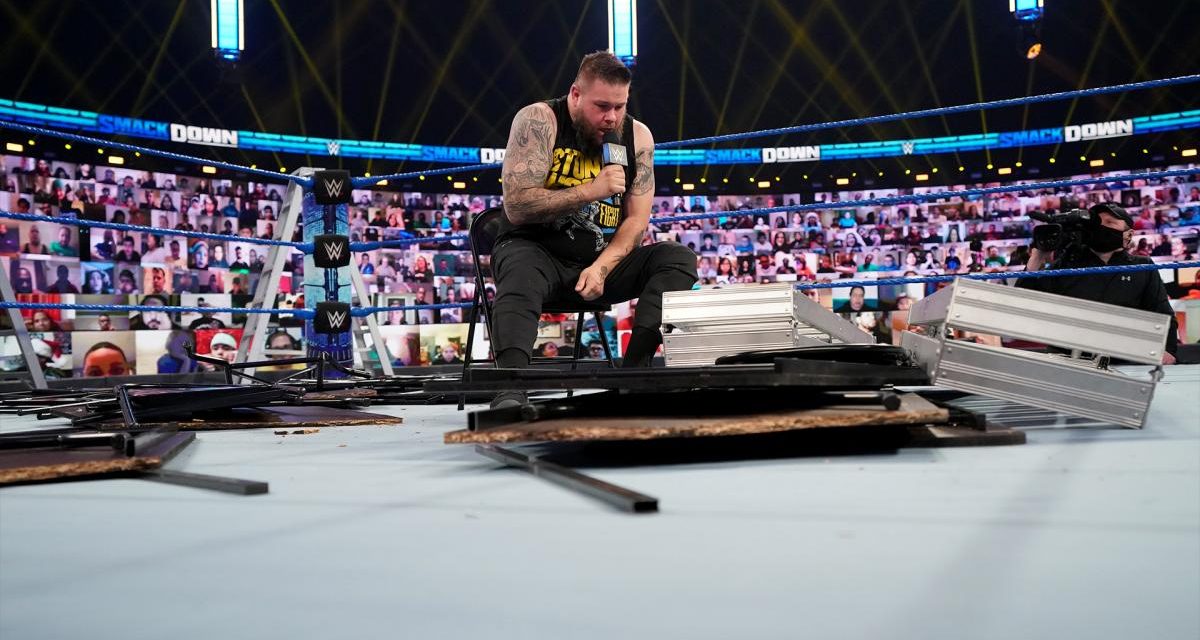 Featuring a match for the SmackDown Tag Team titles, as well as the 1st annual Sami Awards, this November 18th episode of SmackDown showcases an appearance by Carmella, who will be making a toast to her opponent Sasha Banks, since that segment hasn’t been done recently at all.

We start off the show with Kevin Owens, who wastes no time in calling Roman Reigns out to the ring. The champ does not oblige. K.O says he’s told his family not to watch his match at TLC, as he’s afraid of what his children will think of him after what he does to Roman. He calls him a hypocrite and a coward, and Heyman gets himself up on the screen to talk to Owens. He says that Roman will eliminate him, and Owens interrupts him and goes backstage to search for Roman Reigns.

During the commercial break, Jey Uso and Roman unleash a brutal assault on Owens, and afterwards, backstage, Roman tells Jey to finish the job and take him out.

Angelo Dawkins starts off against Robert Roode, who quickly beats down Angelo and tags in Dolph. They look for a double back body drop, but Dawkins kicks them and tags in Ford to deliver tandem dropkicks. Ford pins Ziggler for 2 and attacks him with kicks, and Ziggler rolls him up for 2. Ford hits a back suplex/standing moonsault combo and goes to the top rope, but Ziggler knocks his legs out from under him. He looks for a suplex, but Ford delivers an enziguri. He looks for his Frog Splash, but Roode tosses him onto the floor as we go to commercial. 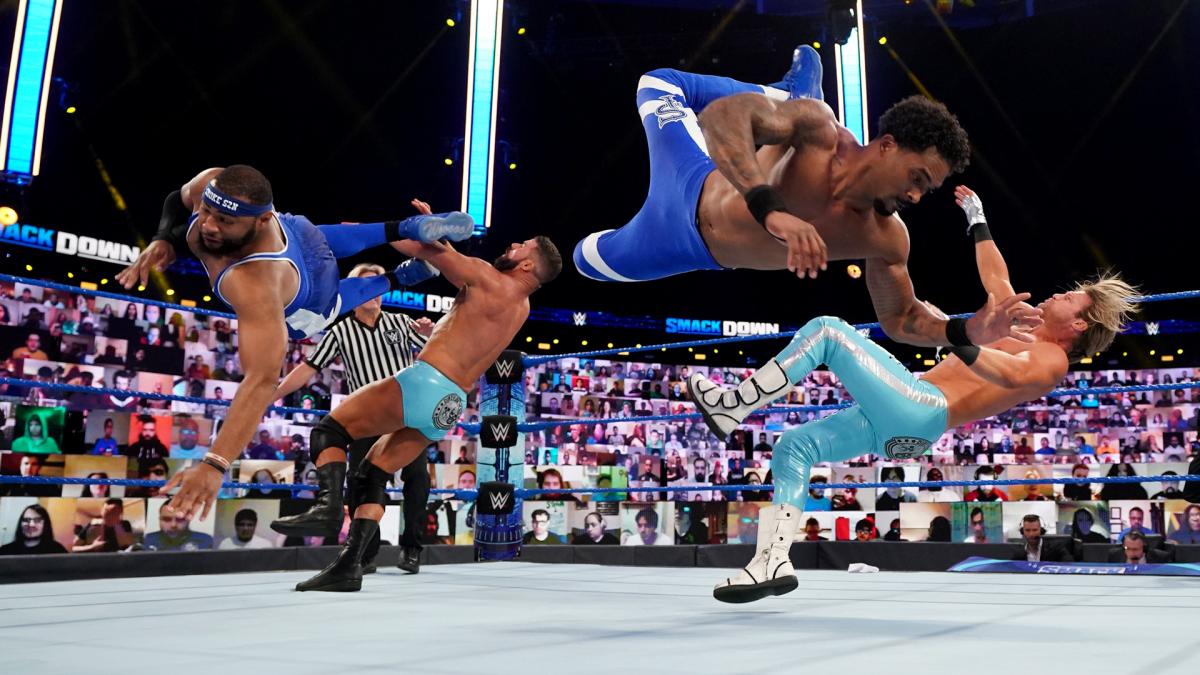 When we come back, Ziggler is rolling up Ford for a close 2. He tags in Roode and they deliver an assisted splash/leg sweep combo for 2. Roode beats down Ford, pressing his knee against his head and pandering to the Thunderdome. He tags in Ziggler, who delivers a dropkick to the previously injured ribs of Ford for 2. Ziggler locks in a deep waistlock that brings the pain to his opponents ribs. He tags in Roode, who delivers a facebuster for 2.

He tags Ziggler back in, and the Show-Off taunts Dawkins before locking the waistlock back in. Ford tries to get out, but Ziggler delivers a kick to the gut that stops him cold. He tags in Roode and they go for the assisted splash again, but Ford tosses Ziggler to the outside and sends Roode into the turnbuckle. Ford tags in Dawkins, who runs through Roode with a series of clotheslines. Ziggler comes in and he tosses both of his opponents around before delivering spinning splashes to both of them.

He hits his double underhook neckbreaker for 2 and looks for his spinebuster, but Roode counters with a Glorious DDT attempt that Dawkins fights out of. The Glorious One delivers a kick that stuns the champ and tags in Ziggler, and the two deliver an assisted Famouser for a close 2. Ziggler looks for a superkick, but Dawkins counters with a spinebuster.

He tags in Ford who delivers his Frog Splash, but his injured ribs prevent him from making the pin until Roode is able to come in and break it up. Roode tags himself in and rolls up Ford, but Ford turns it into his own rollup to get the 3 count and retain the championships.

Backstage, Kevin Owens continues his search for Roman Reigns, but gets stopped cold by Jey, who slams him with a chair from behind and tells him to stay down.

Liv starts off against Tamina, who tosses her across the ring easily. Liv tags in Ruby and the two double team Tamina. Ruby goes for the Riott Kick but gets dropped with a massive clothesline. Kay simply cheers Tamina on as Tamina continues to bully Ruby in the ring. Tamina sets up for a Samoan Drop, but Billie tags herself in as she delivers it, so Liv has time to break up the pin after Kay yells at Tamina to get out of the ring.

Kay goes for a slam on Ruby, but she escapes and tags in Liv. The two deliver a double dropkick to take Tamina off the apron, and they then deliver a missile dropkick/flatliner combo on Kay for the win. 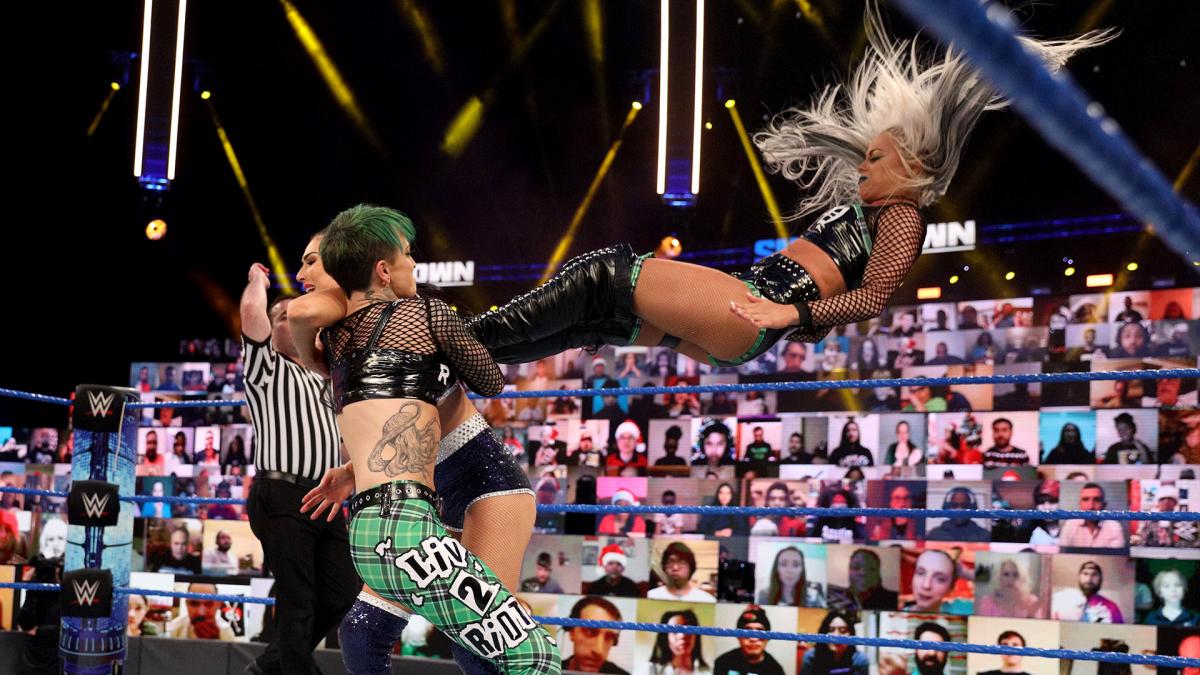 It seems that the Riott Squad have a new tag team finisher. Photo: WWE

Winners via pinfall: The Riott Squad

It’s time now for what I’m sure will be another incredibly tasteful “toast” segment on WWE SmackDown. Carmella says that Sasha Banks is in over her head with her. She says that Banks is drowning in her own reputation, and that Carmella knows she has her beat. She takes a sip of her champagne, and Banks runs down to the ring to partake in it as well. She splashes the bubbly in her challenger’s face and attacks her. Carmella’s lackey pulls Banks away from her, allowing Carmella to smash another champagne bottle on her back.

Kevin Owens is in the doctor’s office receiving treatment, but Jey Uso shows up behind him again, putting him through a table.

Otis starts out aggressively, slamming Nakamura hard and delivering a headbutt. Nakamura fights back with a kick and a series of knees, but Otis eats them like a champ and then tosses Nakamura with ease. He delivers a discus clothesline and an avalanche, but Gable tells him to deliver a suplex instead of going for the Caterpillar. Nakamura nearly makes him pay for that by rolling him up, but he only gets two. Otis tosses him with an exploder suplex and then delivers a Vader Bomb for the win. 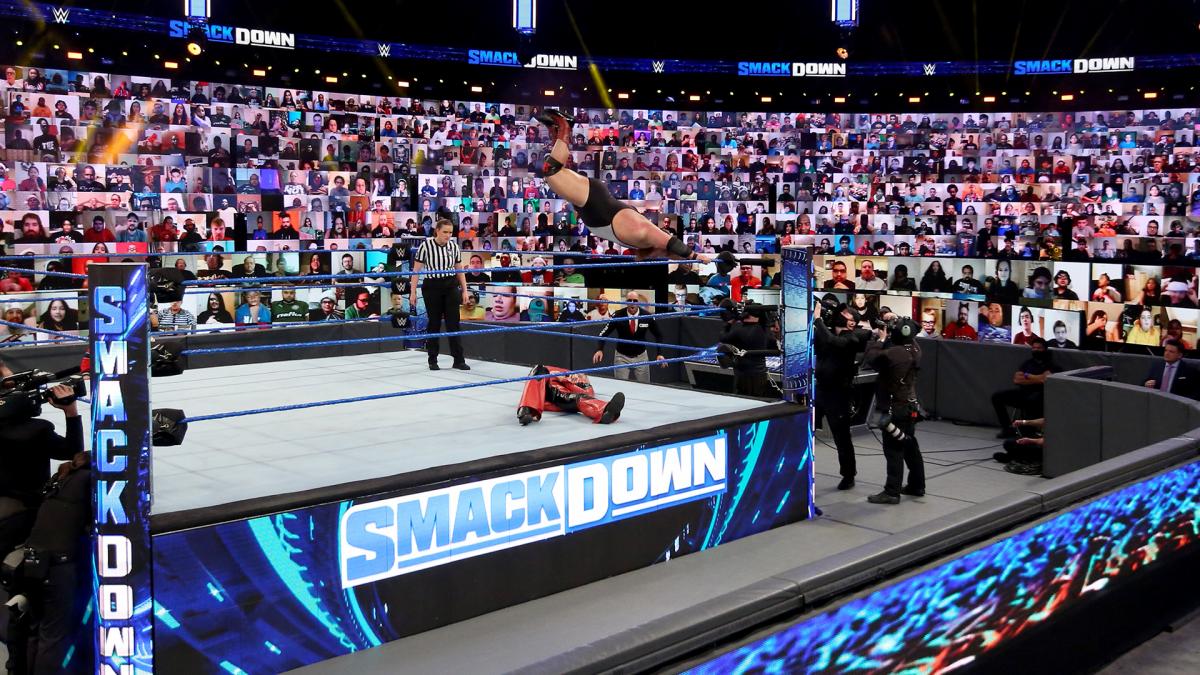 This image looks awesome to everyone except Nakamura. Photo: WWE

Sami Zayn is preparing for his Sami Awards presentation, and leaves to go get some trophy polish. Big E sneaks in behind him and rubs his hands with glee at the sight of a canvas for him to cause mayhem. Sami brings his award show to the entrance ramp.

He brings us a “2020 Year in Review,” which is just highlights of him. As was completely expected, he gives himself multiple awards and gives suitably fake acceptance speeches for all of them. But when superstar of the year comes up, something unexpected happens: Big E wins the award. He is in the middle of his speech when Sami interrupts him, and the Intercontinental Champ earns a beatdown for his troubles.

Kayla Braxton interviews Bayley about her match with Bianca Belair later tonight. She says she’s going to put Bianca on the map tonight.

Bayley starts out strong by hanging up Bianca’s arm on the ropes, but the Est of WWE quickly fights back with a shoulder tackle. Bayley goes out to the apron but gets her leg swept by Belair for 2. She taunts Bayley and then delivers a dropkick, but when she goes for a handspring, Bayley pulls her to the apron and slams her arm first into the barricade as we go to commercial.

When we come back, Bayley is tossing Belair out of the ring. Belair fights back by whipping Bayley into the steel steps. She’s able to get back into the ring, but meets some fierce offense by Belair, including a beautiful stalling suplex. She delivers a springboard moonsault for 2 and then a series of backbreakers. 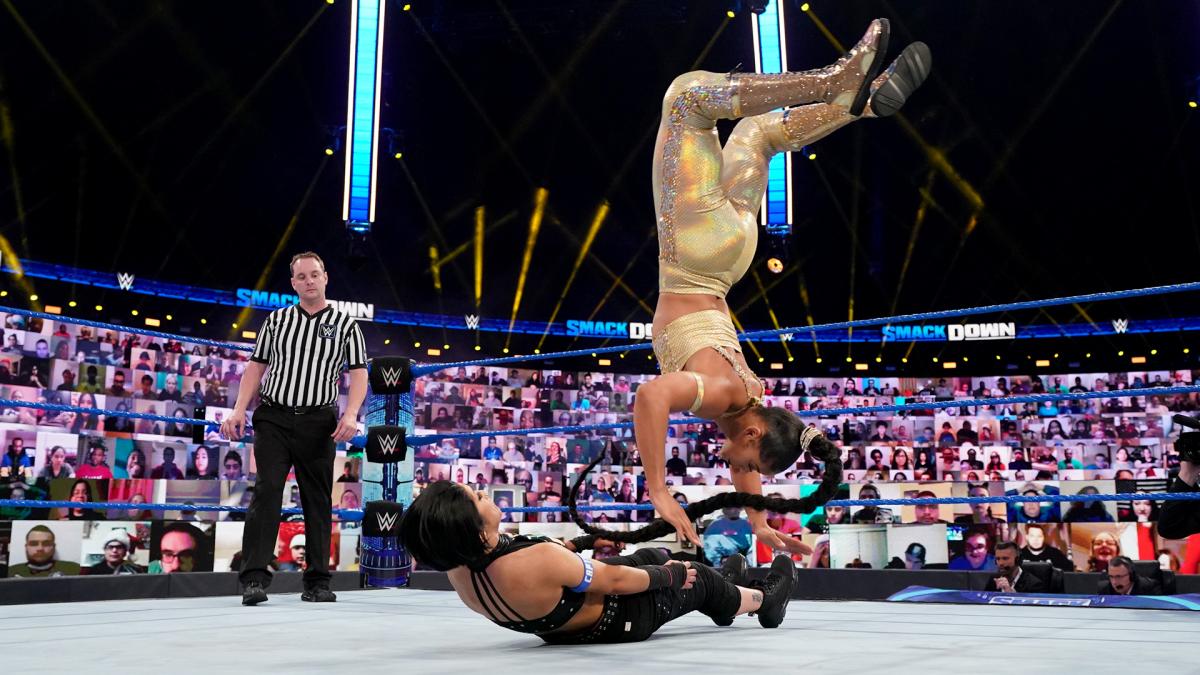 Bianca Belair showing everyone once again that she is the EST of WWE. Photo: WWE

She looks for a 450 splash, but Bayley meets her at the ropes. She looks for a suplex but Belair counters with her own. She slams Bayley with a spinebuster for a close 2. Bayley rolls Belair up and uses the ropes for leverage, but the ref catches her and breaks up the pin. Belair rolls Bayley up and looks for a schoolboy powerbomb, but Bayley rakes her eyes to escape it, and then delivers her finisher to pick up the win.

Roman Reigns finally addresses Kevin Owens. He says he doesn’t understand why Kevin Owens is blowing his chance to be on the “Island of Relevance” and face Roman. K.O interrupts him, taking out Jey with a chair and attacking Roman. The numbers game quickly catches up to him, and Roman and Jey beat him down with chairs. Jey puts him through another table, and Roman does as well. Roman stacks all of the table wreckage onto K.O, along with a few more tables and a ladder. They then slam chairs down onto the whole mess and leave him in the ring. 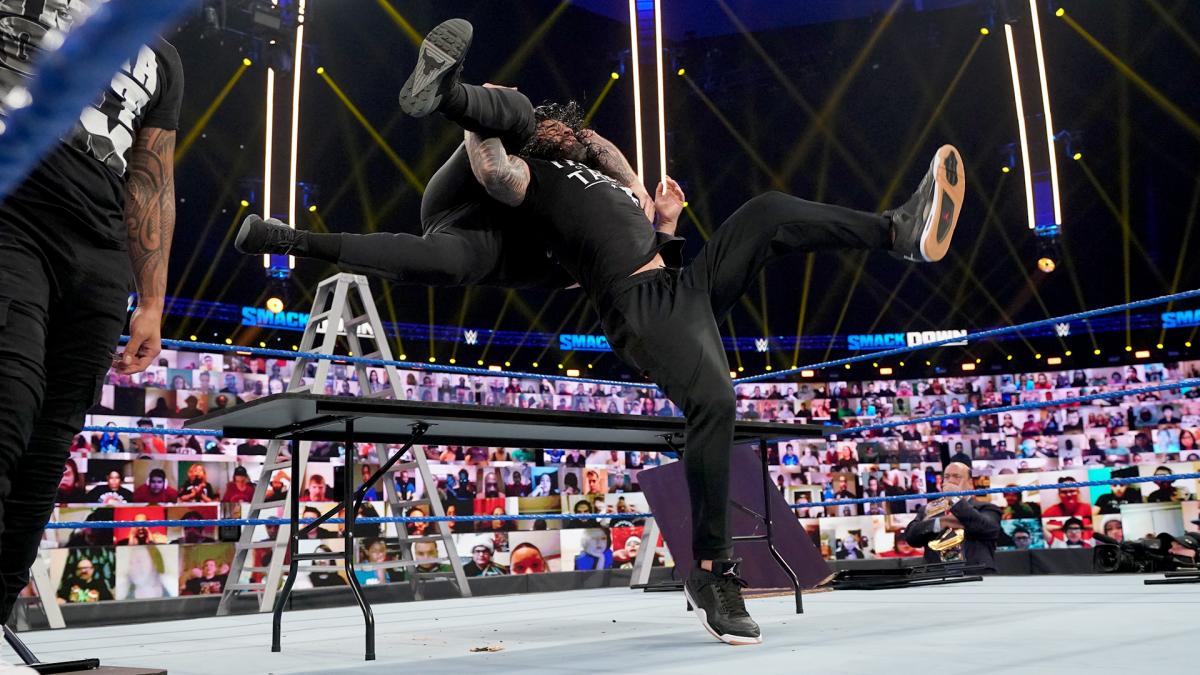 As they head to the back, Kayla Braxton attempts to interview them, but they see K..O climb out of the wreckage and grab a mic, and they hightail it out of there. K.O promises that he’ll either win the Universal Title at TLC, or die trying.

I felt that the Kevin Owens and Carmella segments fell a little flat, so not really a great go-home show in that I’m not super hyped for either of the main title matches.