Total Bellas: Nikki and Artem don’t have any loot. So their plans to have the baby in Phoenix turn moot. To LA they plan a GPS route. But first the girls do a nude photo shoot.

Brie and Nikki Bella may be of Mexican and Italian descent, but they’re so inseparable, you might think they’re actually Siamese Twins. Between working together on various ventures, living next door to one another, and generally considering each other as best friends, it’s hard to picture the two of them ever being apart. But babies have a way of ruining everything. And in this case, that includes the twins’ plans to give birth together.

As the episode begins, Nikki and Artem are trying to put a car seat into their SUV, but predictably screw it up. Seriously, Child Protective Services should be watching this show. They call Brie for help, and she walks them through it. #ThisPoorKid

Later, the twins are giving each other pedicures and foot scrubs for some reason. Brie is a bit irritated that Bryan has been booked for SummerSlam, which is just three weeks after she’s due. She doesn’t relish the thought of having to take care of two kids with Bryan away. Nikki also feels bad, because she’s going to have her kid in LA, so she won’t be able to lend Brie a hand. But maybe she should concentrate on learning how to take care of her own kid first?

But knowing that anything is possible, and she may end up having the kid in Phoenix in the event of an emergency, Nikki and Artem do a practice hospital run the next day. She pretends to be pregnant, and her acting is about as convincing as her wrestling, which is to say, not at all. Good thing they’re doing the test, because Artem has no idea where the hospital is. #ThisPoorKid

Back at home, Nikki uses some pseudo-magic to try to predict Brie’s baby’s gender. Then, Brie asks Artem to help take her wedding ring off, because her fingers have swelled up like sausages. As this is going on, Nikki tells her that she’s decided to have the baby in Phoenix after all. She’s changed her mind, despite the lack of health coverage, because she wants Brie in the delivery room with her. In other words, E! Network doesn’t want to move production to LA during the pandemic.

Kathy calls the twins to give them an update on her Bells Palsy. She’s all mad that she’s not fully-recovered, and vents for a while.

Later, Nikki is gushing about the ultrasound picture of Matteo and how he smiled at her from the womb, which is silly. Or is it? You be the judge. 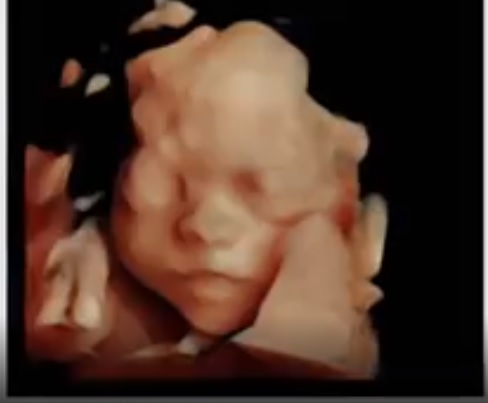 Based on the doctor’s report, it looks like the twins may have their babies on the same day, and they’re thrilled with the idea that there will be another generation of Bella Twins, even though that’s not how twins work. They get home and show Artem the ultrasound picture, and everyone is happy.

Until later on, when Nikki tells Artem that her business manager confirmed that the insurance company won’t pay for the baby if they have it in LA. And since they don’t have much money because she’s a spendthrift and he’s an unemployed freeloader, that means they will not be able to afford it. Meaning, they’re going with their original plan to have the kid in LA. Come on, E! Network, time for you to pony up some cash! They’re sad because this means they have to move to LA right away, so she can get onto a regular medical checkup in advance of the baby’s arrival.

The next day on a shopping trip – see, stop spending money and maybe you could afford to have this kid – she tells Brie the bad news. Brie’s upset because she lost her free babysitting. And Nikki’s upset because she was planning on leaning on Brie to coach her on how to be a mother.

Bryan calls Brie from on the road, and while he’s doing great on the road, Brie’s all frazzled, having to deal with the dogs and Birdie, all of whom are rambunctious and temperamental. He’s sympathetic, but he’s like Brie in the ring – i.e. there’s not much he can do.

The next morning, Kathy comes by to visit the twins. Brie suggests Kathy move to LA to be there with Nikki and Artem to help them after the baby comes. But Brie needs her help as well. Kathy is heartbroken that she can’t be there to support both of them at the same time. Brie says that Kathy should go help Nikki because it’s Nikki’s first kid, and she has no idea how to parent. #ThisPoorKid

Later, the girls go off to do a nude maternity photo shoot to celebrate the last time they’ll be around each other until the babies arrive. There’s tons of pixelated nudity, so if you’re playing the Total Bellas Drinking Game at home, then this will be a fun episode.

The evening before the move, Brie and Birdie go visit Nikki and Artem for dinner – their last one together for a while. They start talking about their childhood, and get all nostalgic about chasing after the ice cream truck. The memories have them thinking about JJ, and Brie suggests that they FaceTime him in, so Nikki can tell him about the move. The chilliness between Nikki and JJ has pretty much fully-warmed over, and Nikki asks him to make sure Brie is okay, since Kathy won’t be around to help her.

The next morning, Nikki stops by Brie’s before hitting the road. Suddenly, they hear the chimes of the ice cream truck, and go outside to get some. This was a farewell present from Nikki and Artem, since Brie had mentioned at dinner that she wanted Birdie to have the same experience as they did growing up. More likely, it’s that Artem was working as an ice cream truck guy, since he’s not really qualified for anything else, and happened to be in the neighbourhood.

The girls get weepy, as they reminisce some more about their childhood, and acknowledge that this is the last time they’ll see each other for a while, and for the first time in a long time, won’t be with each other for a major milestone life event. As the episode comes to a close, Nikki and Artem hit the road, and the separation anxiety begins.