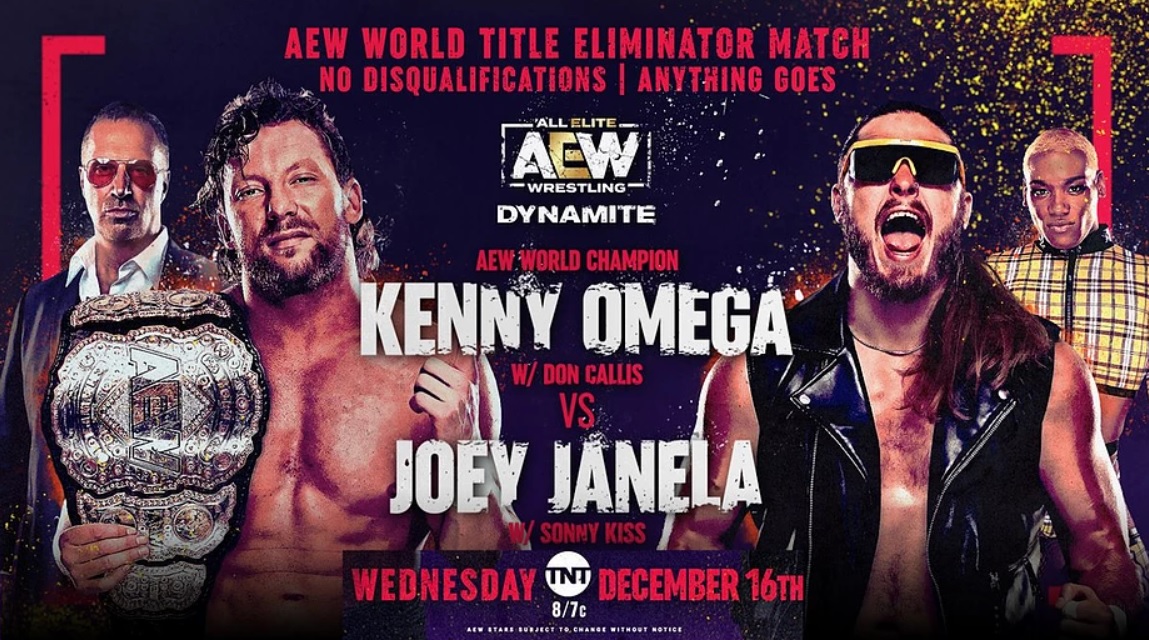 Man, this is getting grueling. Watching wrestling on back to back nights, what a grind! I say that tongue firmly in cheek, by the way. In case you missed it, Kenny Omega was on Impact again last night, messing with that promotion’s pecking order. He’s going to have to watch his own roster-mates tonight, though, as Joey Janela will battle him to try to earn a shot at his gold. Plus we’ve got a big 12-man tag team bout on tap, so let’s flip that dial to TNT and get AEW Dynamite underway.

It continues to be great to see Silver and Reynolds show off their personalities, and they are on-brand tonight as the Recruitment Specialists, dressed as cowboys to show solidarity with Page. Excalibur talks up all the things Page has lost: his friends in the Elite, his tag team belts and partnership with Kenny Omega, and more. Private Party pulls off a very cool move to have Reynolds in position to be pinned, but Hardy tags himself in and makes the cover himself. A little glory hogging, eh? Have to be on guard for a Hardy heel turn, I suppose.

Alex Marvez finds there may still be some racks of dissension within the Inner Circle as MJF seems like he’s praising Chris Jericho but does it in a way where he’s possibly sarcastic and not 100% sincere. You know what I’m talking about.

It’s beginning to look a lot like Christmas at the Rhodes house, where … oh wow, Brandi Rhodes is expecting! Congratulations Cody and Brandi!

Hey, it’s the parents to be. Good timing, that. Angelico must be tonight’s “tag team wrestler who gets to show his stuff solo,” which is fine. Excalibur might be overselling it a bit by stating that Angelico knows “hundreds, perhaps thousands of submission techniques,” but on the other hand, if he ever wants to write them down on a list and read them all on the air, he has a great mentor on this very roster. Alas, it matters naught in the end as he takes the ‘L’ here.

Not to be outdone by MJF’s sarcasm, Taz comes out and congratulates Cody on his victory and impending fatherhood. He and Team Taz have the usual insults for both Cody and Darby Allin and make it known they are headed for the ring. Before they can, the lights go out, the fake snow begins, and everyone on Team Taz (except Powerhouse Hobbs, who seems to want to rumble) executes a tactical retreat rather than challenge the man with the baseball bat.

Oh man, Miro is getting fined $75K for injuring some of the AEW staffers. He seems nonplussed, revealing that next week, there will be a wedding date announcement for Kip Sabian and Penelope Ford.

The next person to step in the ring is Eddie Kingston, who makes it very clear that he doesn’t care about any of the fans. The Mad King addresses his many enemies, including God (!), Pac (who he claims is hurt badly enough to end his career) and “that big goofy bastard” Lance Archer. That insult immediately brings Archer to the ring, but Butcher and Blade are also on hand. The Lucha Bros. enter the fray as well, as does Pac, obviously not hurt as badly as we’ve been led to believe. The problem now is that Archer and Pac can’t agree on who gets to beat up Kingston first. Could be worse — at least God didn’t join in on the attack.

Will Dustin Rhodes join the Dark Order? Well, since he says 7 was a bad idea years ago and is again, I’d say no. He challenges Evil Uno to a match next week.

Orange Cassidy joins the announcers, but lest you think he may join in on commentary, Tony Schiavone points out that his headset isn’t even plugged in and he has the cables in his hand. Brian Pillman Jr. is anxious to lock up with Chris Jericho, who wrestled during the memorial show for his dad when Junior was … four years old. Jericho has been wrestling forever. All 12 men end up in the ring at once, leading to the faces clearing the ring and having a six-man group hug. Jake Hager ends up flattening Griff Garrison, and perhaps inspired by Hardy’s actions earlier, MJF tags in and takes the pin for himself. Top Flight still has something left in the tank for Jericho and MJF after the bell, leading Jim Ross to remind us that Jericho has a way of getting even when he’s upset.

A very busy Marvez talks to an agitated Thunder Rosa, who has beef with Dr. Britt Baker. She needs to have someone watching her back, though, because Rebel distracts Rosa and leaves her a sitting duck for Baker to strike from behind. I’ve said it a million times: Faces need more friends.

SCU vs. The Acclaimed

The Young Bucks are unimpressed with The Acclaimed’s rhymes, and even Frankie Kazarian ends up dropping some hot bars. Well, lukewarm bars anyway. Is this going to be a match that puts the new guys over? Turns out it is, and even if you  aren’t convinced by Max Caster and Anthony Bowens yet, you have to admire their chutzpah for challenging the Young Bucks after (checks notes) one victory on Dynamite.

Winners: The Acclaimed by pinfall

Hey Top Flight can cut promos too. They make it clear that they expect Jericho and MJF to accept their challenge for next week.

Ivelisse and Diamante vs. Big Swole and Serena Deeb

Swole was getting a push a few months back, then it appeared Ivelisse and Diamante were getting the spotlight for a bit. But Deeb is probably the hottest talent in this match, still holding the NWA belt. Interestingly, Big Swole gets the win for her team via submission. Nyla Rose makes a post-match run-in, but Red Velvet chases her off with a steel chair.

Best Friends say their issues with Santana and Ortiz will never be over, but they really want to address Miro and Kip Sabian. Trent and Chuck say they can’t wait for the wedding, and my guess is that they can’t wait to crash it.

A video package hypes up Jurassic Express, possibly to remind everyone they still exist since they haven’t been on Dynamite much lately. FTR takes exception to the promotion of Jurassic Express when the best tag team in the world is right there. A lot of hurt feelings floating around Daily’s Place this evening.

Callis attempts to force Schiavone to hand his headset over so he can call the match, but Tony stands firm and refuses. Unfortunately, Callis grabs another microphone and does his own commentary while walking around at ringside. Plenty of weapons come into play early on, including a cookie sheet. Janela shows off his ability to take a vicious extended beating, and has Kiss to help him set up tables and such. The Callis bravado tapers off a bit as Janela drops a big leg off the top turnbuckle through a table on the floor. Janela crashes and burns on a moonsault, though, and the One-Winged Angel soon puts him away.

Wondering who might get in Omega’s business next? It might be Pac and the Lucha Bros. Ah, I see what’s going on here. Rey Fenix got through the number one contender tournament without losing, so he should get a title shot. Callis is livid that a wrestler is telling the world champion what to do. But Pac has a trump card, and that’s the fact that he’s already spoken to Tony Khan. In two weeks, it’ll be Omega vs. Fenix for the title, and that should be a barnburner. See you in seven!

But before that, one housekeeping note …

When will AEW Dynamite air on December 23?

Because the NBA season is tipping off next week, AEW Dynamite is getting bumped out of its normal time slot. It’s not switching nights, just coming on later. The Dec. 23 Dynamite is expected to start around 10:00 p.m. ET, or immediately following the Celtics-Bucks game. If you forget and show up at 8:00 p.m., just tune in later and you’ll be all good.

Solid but not spectacular is how I’d characterize this episode. Janela really did nothing to earn the main event slot, but he put in a good performance, and the intertwining of various storylines, including some long-running plot threads, was probably the best part of tonight’s show. AEW always loads up its cards for special occasions, so the holiday editions should be quite good.