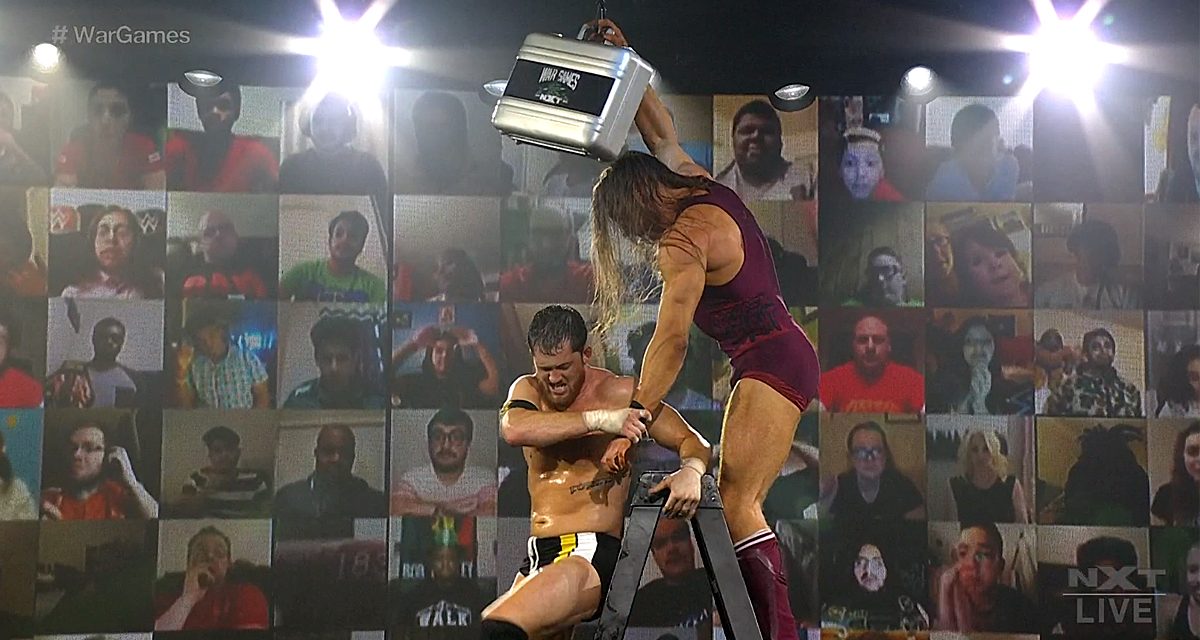 Less than two weeks away from NXT TakeOver: War Games on December 6, the yellow brand featured a brutal Ladder Match main event between Pete Dunne and Kyle O’Reilly to determine the team with numbers advantage inside the double cage. Evidently, preparing for War Games forced NXT to get serious, cutting the filler bouts and properly building to the upcoming card. This didn’t stop the periodic silly segment and head-scratch decision making, but Dunne-O’Reilly served as justification.

Moon takes early control and stops LeRae’s short-lived offense before Dakota Kai and Raquel Gonzalez appear ringside. LeRae eventually cinches the Gargano Escape submission, transitions into a Sleeper, but Moon makes a comeback. While Kai and Gonzalez distract the referee, Moon hits her finisher on Hartwell allowing LeRae to capitalize. She delivers the Wicked Stepsister for the pinfall victory. The heel squad attempts a post-match beatdown, but Toni Storm makes the save. However, Storm betrays her partner and throws her into the wolfpack!

A vignette from Legado Del Fantasma plays, listing off the names they’ve defeated. They call out 205 Live’s Curt Stallion as a future victim.

The Undisputed ERA makes their entrance — the first including all four members in weeks! Kyle O’Reilly wants his shot at Pete Dunne, so they’ll compete later tonight in the annual War Games advantage ladder match. Adam Cole cuts a fired-up promo on Pat McAfee and his goons, setting up the eventual War Games match in early December.

Before the match begins, “Psycho Killer” Tomasso Ciampa takes a ringside seat watching rival Thatcher. While the competitors chain wrestle, the height difference between the two becomes very apparent. With Kushida’s size and the shallow Cruiserweight roster, inserting him into the division would be smart — that’s apparently not the case. They trade strikes and submissions, Kimuras and Ankle Locks, before Thatcher is thrown outside. Kushida targets the left arm as Ciampa watches on. Distracted by Ciampa’s presence, Thatcher gets caught in the Hoverboard Lock and taps out. Timothy Thatcher, the submission and technical specialist taps out. Absolutely disgraceful.

“The Kevin Owens Show” debuts on NXT with special guest North American Champion Leon Ruff. They both dress for the occasion with the Capitol Wrestling Center’s LEDs transforming for the show. Ruff explains his passion for wrestling and drive to become an inspiration, mentioning his victory over Johnny Gargano for the championship. Owens the funny man, with his longtime experience in talk shows, predicts both Gargano and Damian Priest’s entrances and interruptions. The three wrestlers argue before General Manager William Regal announces the official triple threat between Ruff, Gargano and Priest at War Games.

A Shotzi Blackheart vignette hypes War Games with the event’s theme song, “War Pigs” by Black Sabbath, in the background. Flashbacks of “War Pigs” playing at practically every independent wrestling show flood in.

After some humiliating and degrading weeks for Grimes, the eccentric competitor looks to regain some legitimacy. Atlas delivers some moves before Grimes reverses with his standing Spanish Fly and Cave In for the pinfall victory. Rival Dexter Lumis appears ringside and Grimes runs off. Lumis motions the LEDs which replay Grimes’ embarrassing encounters with him and throws a strap out. This presumably sets a Strap Match up at TakeOver, later confirmed by General Manager William Regal backstage.

Rhea Ripley enters the ring, gives props to Io Shirai, and acknowledges some internet rumors. She evidently won’t be heading to RAW or Smackdown claiming the NXT Championship is her only goal. Candice LeRae, Toni Storm, Dakota Kai, and Raquel Gonzalez interrupt with Shirai lifelessly being carried by the latter. Ripley tries to fight back, but the numbers are too strong. Shirai is motionless onstage throughout the attack. Is she alive?

Boa and Xia Li are driven to an undisclosed location and met by “Master”. They enter the building and profusely apologize to a hooded higher power. Li is legitimately in tears — good on her and her acting chops! So, who’s the Higher Power, The Exalted One in this situation? Process of elimination and prior clues narrow down to an Asian woman… Odds aren’t high for guessing this correctly.

Candice LeRae and Johnny Gargano are interviewed in the parking lot. With them is Indi Hartwell who apparently injured her neck taking Ember Moon’s finisher in the opening bout. They’re about to drive off before another Scream mask appears in the backseat. Odds here also aren’t high for guessing Scream Mask 2.

The two competitors instantly brawl before an oddly-placed commercial break interrupts. One ladder has already been placed inside — there wasn’t even picture-in-picture for this! O’Reilly takes a nasty ladder fall and gets stretched between the rungs. Dunne Bucklebombs his opponent into a ladder, but O’Reilly continually targets the leg. They battle on the apron before crashing through a ladder bridge before commercial. Dunne smashes his opponent’s fingers between a ladder, but O’Reilly comes back with a Guillotine and suplexes him onto the steel. They both avoid maneuvers onto the ladder before trading strikes — O’Reilly winning the exchange with a Rebound Clothesline. But Dunne introduces a chair, then throws his opponent over the barricade preceding the long climb.

Miraculously, O’Reilly comes back, pushing Dunne who lands roughly on the corner ladder. Then, a hooded masked man — assumably Pat McAfee — pushes O’Reilly off the ladder allowing Dunne to capture the briefcase. Fantastic match to close the show!

This episode flew by, mainly because there were only four matches — decent ones too. Tons of segments as usual, with “The Kevin Owens Show” really standing out. Closing the show, the ladder match will likely be ranked the week’s overall best match — hard to top.