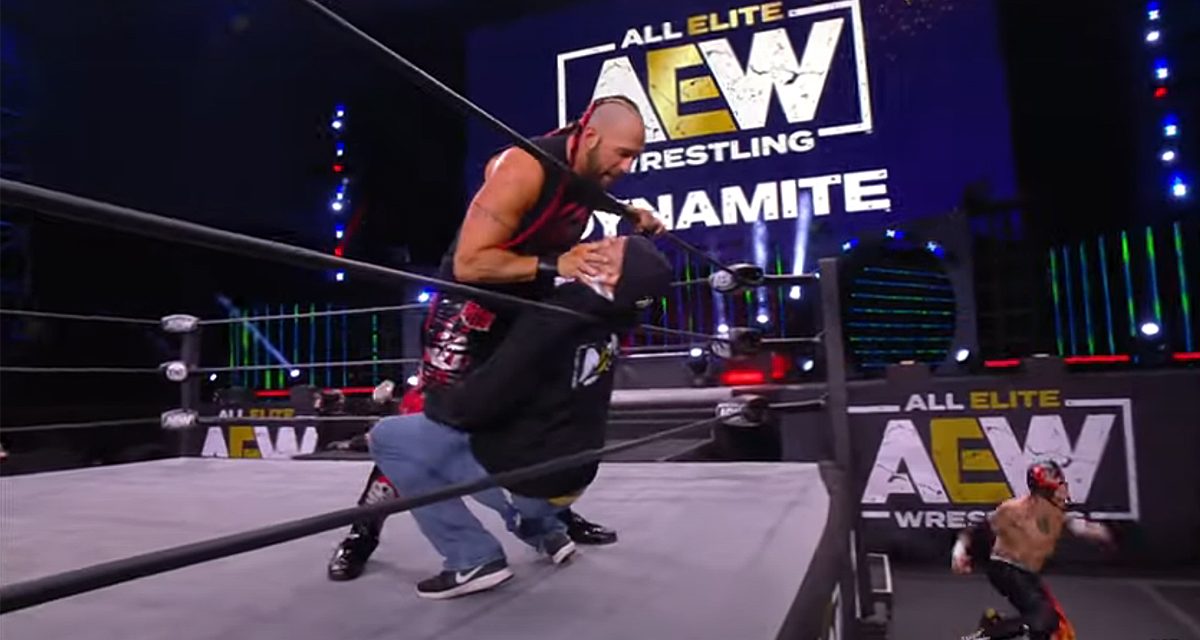 Hey you. Yes, you. We’ve almost made it to the end of this challenging year. There are still a few weeks left, however, and that means a few more Wednesday nights of AEW Dynamite. This feels like a build-up episode, as AEW is promoting a big deal show next week, but there is a women’s title match and a contract signing, so there should be at least a few interesting developments. Let’s head live to TNT to confirm.

It’s pretty interesting that a faction that started out by turning its members into faceless automatons is not getting Silver over by showing off his personality. He and the Dark Order note prior to the bout that they actually like Page and admire his flowing locks. Speaking as someone who never had a thick mane, I feel that second part. Silver spanks Page (yes, really) during their battle, which brings a rare smile from the Hangman. Also, we learn that Jim Ross is making a pumpkin pie for the first time this Thanksgiving, branching out big time from barbecue sauce. Page goes over, of course, but after the match, he gets what sounds like a recruiting pitch from the Dark Order. “You know where to find us,” says Evil Uno.

Alex Marvez catches up with a suit and sunglasses-clad Kenny Omega, who muses on how Jon Moxley has taken his spot as the best in the world, and that he needs to win the AEW Championship to get it back. There’s also some psychological work going on, as he goads Mox into attempting to beat him without any “garbage wrestling.” He finishes by referencing Moxley’s childhood story and claiming his dad could beat the s–t out of Moxley’s dad. Probably. I smell a pay-per-view co-feature bout!

What did cars ever do to Darby Allin? He stays true to his aesthetic by setting an old junker on fire, for reasons.

Taz joins the announcers to reveal that he has business to handle after Hobbs destroys Johnson, which he does in short order. Even his silly new first name doesn’t slow him down.

Taz’s complaint du jour is that Brian Cage’s FTW Championship is not being recognized by AEW. He demands that a member of management come out to address his grievance, but instead gets his microphone cut instead. Taz makes Justin Roberts give him his mic but ends up with that one silenced too. Cody finally wanders out for a conversation and tries to blow Taz off with a “run it up the flagpole” bit, then goes for a below the belt shot by mentioning that Taz’s son is training with Cody to be a pro wrestler and not his dad. Enraged, Taz slaps the Tazmission on Cody, who has to be rescued by the arrival of the Gunn Club.

Even though Eddie Kingston tells Alex Marvez that he’s not mad at the Lucha Bros. leaving his family, I’m not certain I believe him. Mox also crashes his interview, but doesn’t say a word as Kingston says “it wasn’t me,” Shaggy style.

Wow, Top Flight really are just kids: Darius Martin is 21, and brother Dante Martin is 19. They impressed last week against the Young Bucks, so it was cool to see AEW tweet that they were bringing the duo in to join the roster. Though they have an awkward moment or two, they certainly have some chain wrestling chops, and there’s no doubt that when they take flight (sorry), they hint at having the “it” factor. They still have to pay their dues, though, so Dante tapping out to Angelico is logical. TH2 wants to do the heel thing with a post-bell beatdown, byt the Young Bucks arrive quickly to keep it from getting too bad.

Maybe Festivus has arrived early this year, because it seems there is an airing of grievances going on all night. I’m not 100% clear what Vickie Guerrero is saying with regard to Brandi Rhodes, but it’ll all make sense eventually, one presumes.

It pains them to admit it, but FTR says that for three seconds, the Bucks were better than them. But it’s their right or destiny or whatever to get the belts back. Tully Blanchard

Fresh off their much-panned Las Vegas trip, the Inner Circle accompanies Jericho and Hager to the ring. At least they have cool new t-shirts. They aren’t just there to be spectators either, though Kazarian is able to evade most of the hijinks. Daniels is not so lucky, getting smacked in the face by MJF’s Dynamite Diamond Ring and then having his lights turned out by the Judas Effect. Kazarian takes exception and smashes MJF in the face, leaving SCU badly outnumbered in the ensuing melee. A steel chair is a heck of an equalizer, though, and Scorpio Sky runs out wielding one to send Inner Circle into retreat.

Miro and Kip Sabian want to introduce their new video game segment, but Orange Cassidy is on hand to set the stage for an ambush by Best Friends. We never see who wins after Miro knocks the camera over.

Omega’s over the top entrance for the contract signing ends abruptly as Moxley assaults him in the tunnel. They fight to the ring, where Moxley hits a Paradigm Shift onto his championship belt. Mox tells Omega that whoever he hired to take him out did a piss poor job, and that Kenny will have to dig down deep to find the Omega everyone thinks he is. The champ calls their match next week a meeting of the two best wrestlers on the planet and lets Omega know he better not miss when he takes his shot. Moxley signs the contract, thanks Tony Schiavone and exits.

Oh, Inner Circle looks upset. MJF wants to know what kind of man sucker punches another man in the face, and Jericho warns Kazarian that he’s going to end Frankie’s career next week in retaliation. As one does.

A video package fills us in on how we got to Anna Jay vs. Hikaru Shida for the women’s title, which is coming up next.

There are a couple subplots here, including the presence of some of Jay’s Dark Order teammates on the stage, as well as questions about the status of Shida’s knee and where the other half of her skirt went. Jay wants to have Conti help her take shortcuts, and now this thing is veering into overbooked territory. There was also a full commercial break in the middle of this, which is a bad look for a title match of this type. In any case, Shida retains and the announcers try to sell this like a validation of Jay’s bona fides, but I’m not sold.

As Shida goes to leave, Abadon crawls out to lick her title belt. Got to mint as many women’s title challengers as possible.

Matt Hardy says that if he could overcome his challenges in 2020, you should be able to get past your own pedestrian challenges. What would Matt do? Revert to Version 1, apparently. Also, Team Taz says something or other ahead of their meeting with Cody and Darby next week on Dynamite.

The Butcher & The Blade (w/ The Bunny and Eddie Kingston) vs. Rey Fenix and Pac (w/ Penta el Zero Miedo)

Kingston joins the announcers for this one, so there’s at least a chance that the Lucha Bros. will reveal they are still loyal to him and turn on Pac. That would be a bit of a waste since both sides of this feud have three men, so it’s pretty balanced and may yet get fans to care about Butcher and Blade. Even as the action heats up, there’s a “something is going to happen” feeling, and it pays off (at least a little) when Kingston gets personally involved.

Winners: The Butcher & The Blade by pinfall

As you’d expect, what’s left of Kingston’s family keeps laying in hands and feet after the bell, so it’s just a matter of who comes out to save Death Triangle. Everyone who had Lance Archer in your pool, please stand up. Now sit back down, because you definitely did not. Archer and Kingston have ongoing beef, so it remains to be seen if this is just an enemy of my enemy arrangement or if the Murderhawk Monster is down to be part of a Death Rectangle. Something to ponder as we wait for next week’s loaded Winter is Coming card. See you in seven!

If it’s possible for too little and too much to be going on in one two-hour wrestling show, it took place tonight. The whole thing was a little light on star power, but it also felt busy. The highlights were seeing Top Flight again and the interplay between Moxley and Omega, brief as it was. The women’s championship match definitely gave more ammunition to those who feel AEW’s women’s division is threadbare, so that’s an area where the promotion can and should look to improve.