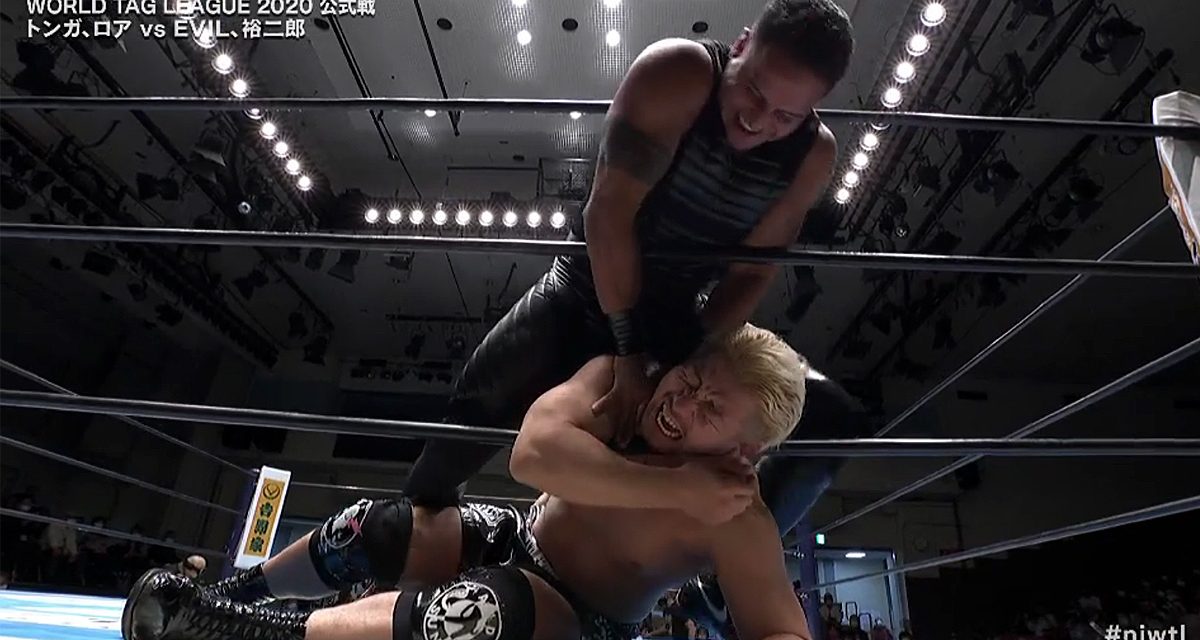 It was Chaos versus Chaos and Bullet Club versus Bullet Club (again) at night two of NJPW’s World Tag League tournament.

The Bullet Club showdown had the Guerrillas of Destiny (Tama Tonga and Tanga Loa) facing Evil and Yujiro Takahashi.

After the group “too sweet” Evil and Yujiro attempted a sneak attack. It is stopped before it could even begin with Evil being hurled out of the ring and Yujiro being battered by Loa.

“Tell him you don’t want any more!” shouted Loa advising Yujiro to just tell the official that he quits the match. Yujiro wouldn’t so the punishment from the Guerrillas continued. 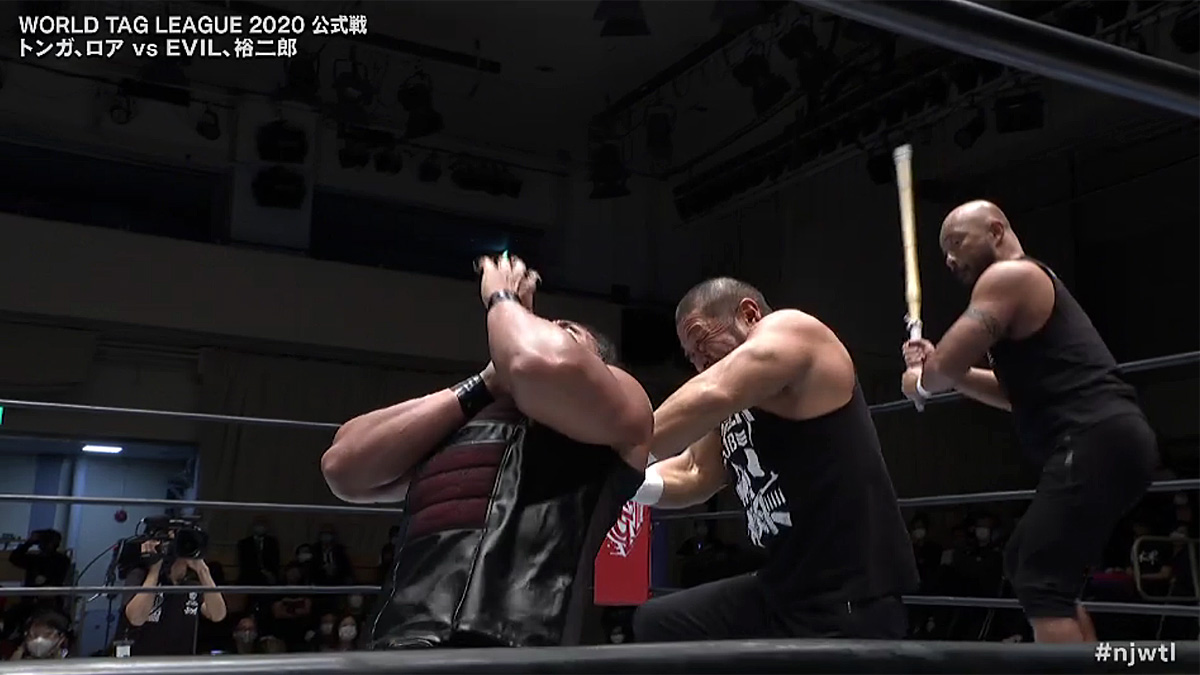 Jado takes aim at Dick Togo as Bullet Club turns on each other. Courtesy: NJPW.

Yujiro hot-tagged Evil who threw both Loa and Tonga one by one into the steel barricade. Surprisingly, Dick Togo laid the boots to Tonga while he laid on the arena floor. Back in the ring, Evil had no mercy on Tonga raking his eyes and face.

Everything really imploded though when Togo choked out Tonga with his garotte. Jado responded in kind by hitting Togo with his kendo stick across the back. The Guerrillas nullified Evil with the Magic Killer. Yujiro fought on alone splashing Tonga on the floor. As he prepared to do the same to Loa, Jado hit him with the kendo stick. Yujiro submitted to Loa’s crossface.

Just like Fale and Owens did the other night Yujiro and Evil split the scene without acknowledging G.O.D.

No holds were barred in the battle of the Chaos teams either when Tomohiro Ishii and Toru Yano fought Hirooki Goto and Yoshi-Hashi. 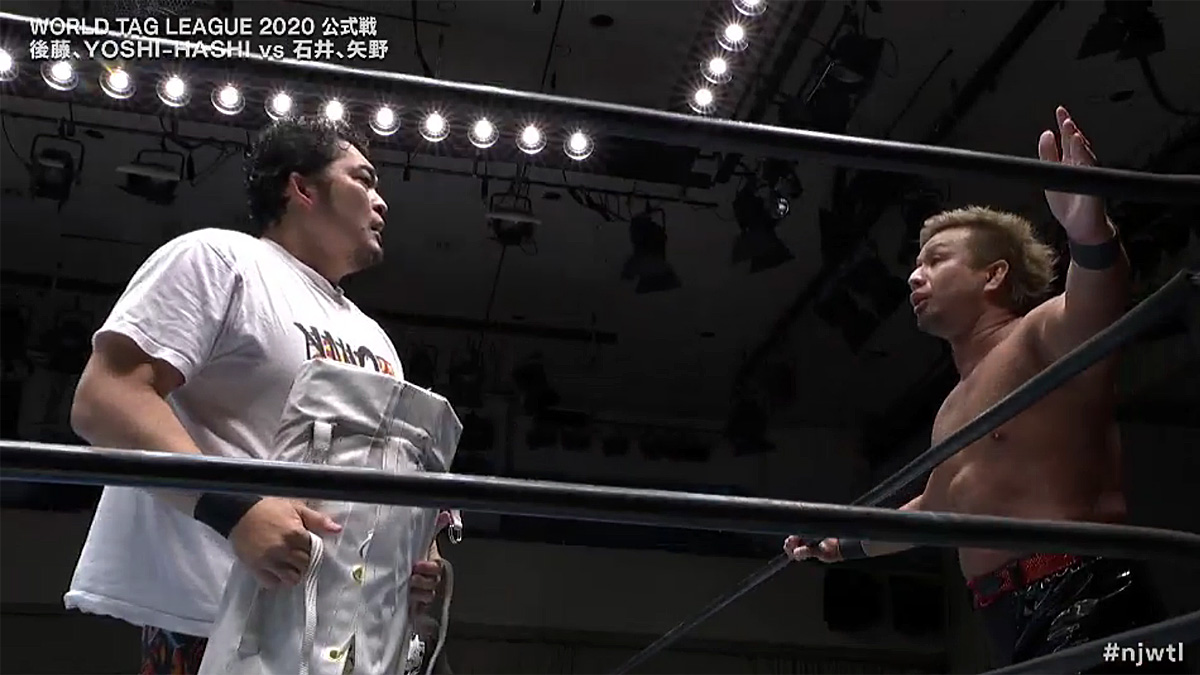 Yoshi-Hashi and Toru Yano have a turnbuckle debate. Courtesy: NJPW.

Yano began to untie one of the turnbuckles. Yoshi managed talk him out of it using it. Yano threw the turnbuckle pad on the ground. Yano would pick it up again later bashing Yoshi and Goto with it after he and Ishii were double-teamed. Yano also smashed Yoshi into the exposed buckle. It was Ishii though who scored the second win in a row for his team by pinning Yoshi with his brainbuster.

Kojima wins another one with a Lariat.

A big brawl erupts with Fale and Khan battling for most of the match. Khan puts the claw on Owens and throws him into Fale knocking him to the floor. Owens is whipped into Cobb for Tour of the Islands.

Winners: Jeff Cobb and The Great-O-Khan

FinnJuice puts away Henare with the Doomsday Device. Robinson finishes the match with a bloody nose.

Takagi pins Taichi with Last of the Dragon to hand the champs a loss.