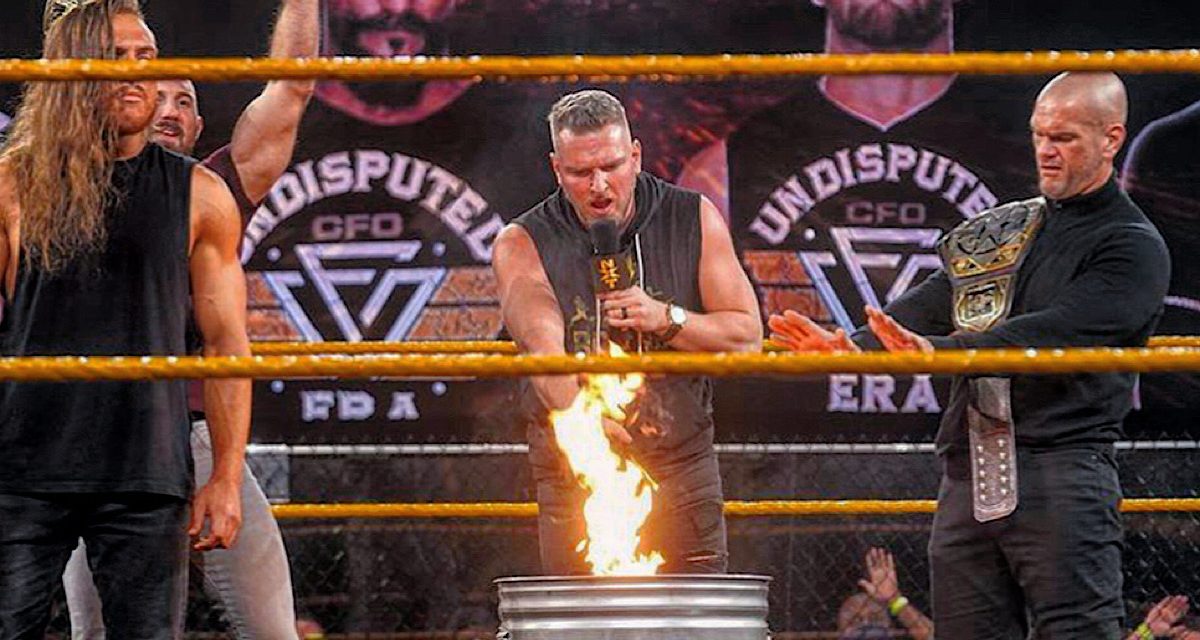 Following last week’s Halloween Havoc event featuring championship changes, stipulation matches and zombie armies, NXT returned to relative normalcy heading into its inevitable next big show. Tonight’s weekly edition was headlined by Velveteen Dream and Tommaso Ciampa — a wonderful showing albeit the only worthwhile match to consider. But relating to outside business, Pat McAfee and his new faction proved that they’re possibly WWE’s best active group just weeks into the run. McAfee and his clan will continue beefing with the Undisputed ERA, hinting at some four-on-four action and possibly the yellow brand’s next blockbuster.

The women’s division once again assumes the opening slot as Kai takes control after some chain wrestling. After escaping a long submission, Moon makes her comeback and proves either ring rust or Kai’s superiority regarding technique and execution. However, Moon does show unmistakable heart, crashing off a suicide dive before break. Eventually, they trade Crossfaces before Moon supposedly “explodes” with awkward strikes. Gonzalez provides the distraction, and Kai capitalizes with her finisher for the victory. Kai continues to show greatness; she’s miles ahead of her fellow rostermates.

An anxiety-filled Cameron Grimes is interviewed backstage about last week’s loss in the Haunted House of Terror match. Clearly suffering from kinemortophobia, he runs off before the upcoming match.

After literally wrestling circles around his opponent, Kushida begins targeting the left arm. He’s definitely starting to regroup and settle into his element, but Grimes returns with Snake Eyes before the break. The Japanese makes a comeback with flashy kicks and a Crossbody as Grimes fights back with a Powerbomb. The latter falls victim to yet another left-arm attack and inadvertently takes out the referee. Another official makes the save, except this referee was Grimes’ worst nightmare: the zombie from last week. Kushida cinches an armbar for the submission victory. This would’ve been the most ridiculous finish in ages if Grimes’ prior Halloween Havoc match hadn’t happened. Bumpy road to the moon apparently for Grimes.

This Maverick-Dain angle needs to end already. To the commentating booth’s great surprise, the oddball couple starts to show some tag-team chemistry before their more experienced opponents take control. While the match continues, Pat McAfee and his goons are seen entering Full Sail. They inevitably crash this match while McAfee steals a camera, filming the impressive beatdown. On a relevant side note, Pete Dunne’s involvement in this faction proves how great a heel he is. Never should’ve strayed from his roots of mean mugging!

McAfee takes the mic after break and mocks the rival Undisputed ERA. He pays tribute to them by presenting a nice Powerpoint of the ERA’s career. Calling back to Roderick Strong’s betrayal of Dunne and subsequent joining of the group, the latter explains his siding with McAfee. Continuity rules! They grab a trash can and place a burning Undisputed ERA flag inside while McAfee shows off his campy charisma — absolute stud. Back outside, Killian Dain tries to take McAfee out, but the numbers are too strong. Dunne kicks a car door into his head as McAfee proclaims, “Sorry ‘bout it, pal!”

Inside the Gargano House, new North American Champion Johnny Gargano plays a board game with the Scream mask that saved him last week. The biggest takeaway is that Gargano uses his own theme song as his ringtone.

Blackheart slips off the ropes in the opening minute. Storm’s ferocious hip attack brings them back, but the steam was gone throughout the first half of this match. Storm delivers a series of German suplexes, and her opponent returns the favor for two. Blackheart hits a DDT towards the outside before rival Candice LeRae appears on the Titantron, threatening to destroy the former’s toy tank. Storm capitalizes on the distraction and wins with a rollup. LeRae hops inside a monster truck and runs over the tank as Blackheart breaks into tears, proving that an arcade game isn’t the worst feud starter in current-day wrestling.

Earlier today, Legado Del Fantasma was met in the parking lot by Jake Atlas. He took out Raul Mendoza with a lead pipe before driving off.

Timothy Thatcher holds another live Thatch-as-Thatch-Can session with this week’s poor trainee. He refuses to release the hold, and once again the trainee gets flustered. Anthony Greene makes the save as Thatcher retreats.

Xia Li is backstage with General Manager William Regal who grants her crazy wish of battling Raquel Gonzalez next week.

Dream still sports the purple cast that ignited this feud as Ciampa tries to forcefully remove it. This was an NXT Takeover main event years back, and these two still come across like superstars. Ciampa slams the casted hand into the announce table and stomps it inside the ring. Notably, Dream’s selling has been super dramatic in the opening half, but that comes with the Dream’s terms. He finally switches the momentum with a Spinebuster, but Ciampa fires back with closelines and a huge Superplex. Dream attempts to distract the ref before attempting a cast shot, but Ciampa rolls through into the Widow’s Bell and Fairy Tail Ending for the victory. For weekly NXT, a wonderful main event.

Nothing inherently wrong with this episode, just hard to top Halloween Havoc. Alright matches across the board, although again, Dream-Ciampa was the only one worth talking about. The highlight of this show was Pat McAfee, Pete Dunne, Oney Lorcan, and Danny Burch. They’re already an outstanding heel group!