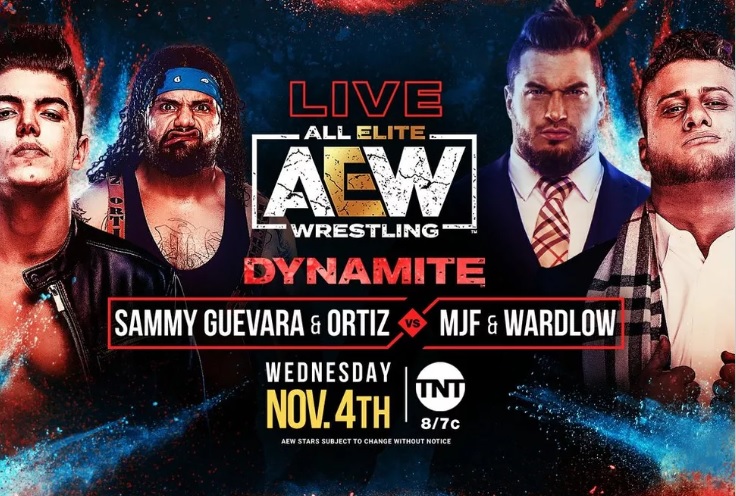 Man, sure is a lot going on this week, or so I hear. But Wednesday nights are no time for counting ballots, they’re time for wrestling. In this case, it’s the final episode of AEW Dynamite before Full Gear. Most of the pieces are in place, so it’s just time to amp up the drama. Good thing this is all on TNT, then.

Before Chris Jericho can join the announcers tonight, he wants to give some props to Jake Hager, who still bears the cuts and bruises left over from his recent MMA bout. MJF stops by and says he wants to set aside any tension from last week and prove himself worthy of being in the Inner Circle. But while Le Champion admits MJF “checks a lot of boxes,” he wonders if MJF has the killer instinct or if he’s a little bit … soft. A determined MJF heads for the ring while Jericho takes his seat at the announce table.

MJF and Wardlow vs. Ortiz and Sammy Guevara

As my son notes, it was kind of refreshing to see Ortiz speak up last week as the voice who objected to MJF’s attempts to join the Inner Circle. Not sure it means anything for the long term, but it’s good when the members of Jericho’s group get to show their own individual personalities. Wardlow gets his cool spot when he chucks all three of the other men off the top turnbuckle at once. I wasn’t sure about him at first, but his inevitable singles push will be fun. MJF shows off his aerial skills and, apparently, his mean streak as he gets Ortiz to tap out to the Salt of the Earth.

Winners: MJF and Wardlow by submission

After the match, MJF catches an unsuspecting Jericho off guard by attacking him over at the announce table, and after Hager chases Friedman off, Jericho can only grin. It is kind of what he asked for.

Heel Kenny Omega is a good time. He has just the perfect smarmy demeanor while still maintaining enough of his good guy mannerisms that it comes off as more subtle than it would otherwise. His discussion with Tony Schiavone is the typical “I’m going to win the tournament” stuff but he makes it better.

The feud over the smashed video game cabinet continues. And it involves more than just the men in the ring, as Penelope Ford and Orange Cassidy have a sunglasses-related exchange on the outside, and then the Dark Order decides to join the fray as well. The ref quickly restores order, and this turns into a pretty compelling encounter. Miro wins, as you’d expect, and then Chuck Taylor and Kip Sabian run down as well. Miro is cutting a promo of some kind when Cassidy returns and leaps from the top turnbuckle, hands in pockets, to end this segment.

J.R. sat down with Hangman Adam Page earlier today, and he seems pretty confident, saying he has had plenty of time to prepare for a match with his former partner. But his bravado may just be liquid courage, because when J.R. presses him about being nervous, Page says he is, because if he loses, he doesn’t know what he has left besides his whiskey.

A number of AEW wrestlers and personalities weigh in on the big tag team showdown between FTR and the Young Bucks at Full Gear. Almost forgot the Bucks said they won’t challenge for the straps again if they lose, which is an intriguing wrinkle.

Speaking of stuff I forgot, it definitely slipped my mind that Team Taz is still waiting to find out if Will Hobbs will join them. Hey guys, maybe it’s not meant to be. Taz is upset because Tony Khan has been blowing him off, and they have a series of grievances. But mostly they want matches at Full Gear, and since they don’t have them, Taz promises there will be “an FTW presence” on Saturday night. Ominous.

Before Private Party can compete, Guevara ambushes their buddy Matt Hardy. Refs check on him during the picture-in-picture segment.

Lest we forget, part of the FTR-Bucks storyline is the assault on Matt Jackson and his injury status. Jericho makes fun of him for even competing tonight, and the announcers keep mentioning it during the bout. Cool, we get it. OK, Jericho coining the nickname “Wobbly McGee” for him is pretty humorous. The bad leg doesn’t stop Matt from helping Nick win with a BTE Trigger on Marq Quen, but the question from Excalibur is succinct: “Was it worth it?”

And the early answer is maybe not, because FTR arrives to attempt to do more damage to Matt’s leg. Page comes to the rescue just in time, followed shortly thereafter by Omega. Will they throw down? Not for now, as they bump fists and then exchange some words as we head out to commercial.

We’re not waiting until the last segment for the in-ring discussion between Eddie Kingston and Jon Moxley. Once both men are in the ring, they go nose to nose but don’t throw any blows (sorry about the rhyme) because Tony Khan has decreed that any “physicality” means their match is off. Kingston repeats his assertion that he had to sell out to get to this spot in the industry after 18 years, becoming everything he hated. He’s fired up, but Moxley takes the emotion up a notch by relating how he promised Kingston’s mom he’d look after her boy, and now he has to take Eddie out. Whoa. Kingston begs Moxley to take a shot at him, yelling that Jon needs to be prepared to kill him on Saturday. This is a textbook example of how to build heat for a title match. Well done.

Seven months of isolation has clearly not made PAC any less crazy. But even if his promo is hard to decipher, it’s pretty clear that when he returns, it’s going to be bad news for whoever is in his path.

Are there any mid-carders without feuds?

With a title match coming up, Rose has a message to send to Hikaru Shida, and in this case it’s delivered by using Shida’s finisher to pin Red Velvet.

AEW hasn’t really used Guerrero as a mouthpiece too much, but it’s effectively done here as she taunts the champ. Rose and Shida throw some punches in a preview of their Saturday night title match.

Just like we heard insights into the tag team title match, the AEW talent and staff give their predictions on who will win the Omega-Page bout before it turns into a montage of highlights from their tag team run with “Don’t Know What You Got (Till It’s Gone)” by Cinderella. 1988, stand up!

After a full card rundown of Full Gear, it’s time for a Darby Allin video. In this one, he’s beating up a car and then driving said car into a guy wearing a Cody mask. “Darby Allin is off his rocker,” yells Jericho.

Gunn Club is undefeated, but they have yet to wrestle on Dynamite. That’s ruling Dark alright. There’s some funny stuff between Jericho and Schiavone, and for the love of Pete, someone please tell Jim Ross when the picture-in-picture segments are coming? With Silver and the younger Gunn involved, this match definitely features two of the most highly caffeinated members of the AEW roster, and it’s very cool to see Austin Gunn get the pinfall.

We’re not quite done here, as the Dark Order threatens to invade from the fringes, but Cassidy appears and drops Silver with the Orange Punch. Cody also wants to close things out on the mic. He cites Allin’s comments about TNT not wanting him as a champion or the face of the network. That’s not true, claims Cody, as he brought Allin in and wrestled him to prove Darby had the stuff. This is about as fiery of a promo for a secondary belt as you’ll ever hear, and a perfect way to close things out. Full Gear should be excellent, so check it out Saturday and we’ll see you in seven!

There’s always the risk of expecting too much from a go home show, and this one was about as good as you can expect. A nice, lively crowd and good matches were the foundation, but the highlights were the emotion in the Mox-Kingston faceoff and Cody’s finale. This PPV card is looking particularly loaded, so here’s hoping it delivers on Saturday.