Cody puts it all in Full Gear 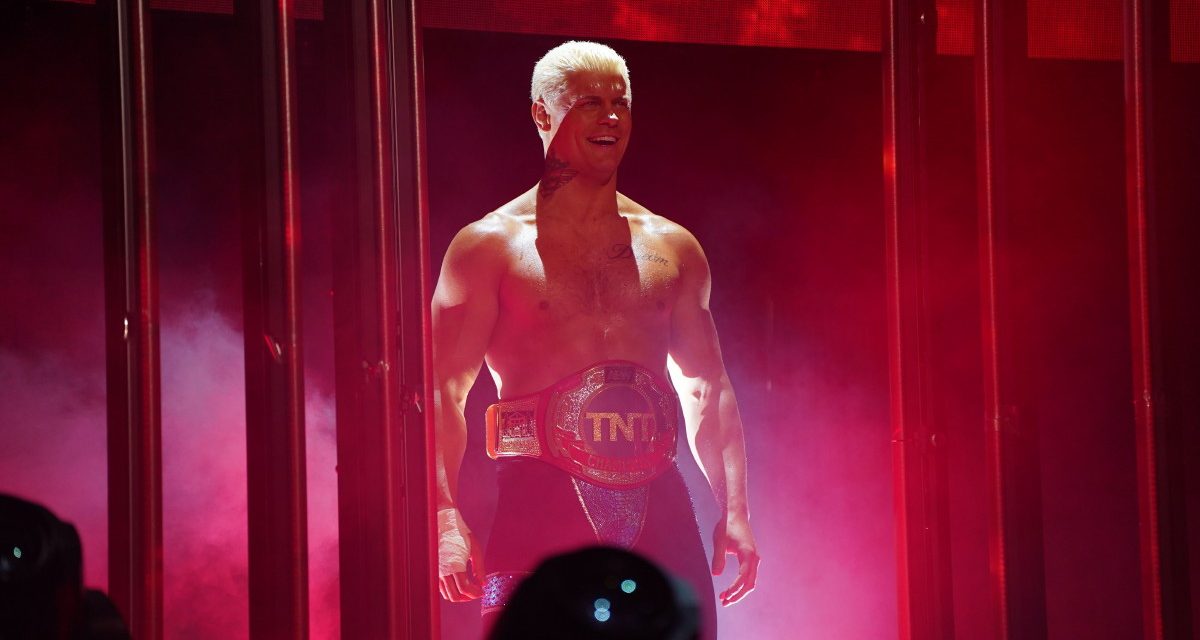 In a media call on Thursday, two days prior to the Full Gear pay-per-view, TNT Champion and and AEW’s Executive Vice President Cody Rhodes addressed AEW’s medical protocols, the future of AEW on TNT, managers and stables, and even dancing.

Right off the bat, Rhodes commented on the recent news of him being able to use his last name again, as WWE had ceded any legal filings. He’s very happy to be Cody Rhodes again, but likely not on the show. “It’s not something I probably will use in the wrestling space.” He’s grown attached to The American Nightmare Cody, he’s more excited about being able to use the Rhodes name in third-party ventures, such as the Go Big Show, an extreme talent show that Rhodes is a host on.

Full Gear and its matches came up often.

Rhodes himself is defending his title against Darby Allin. He acknowledged that Allin has grown, and he’s in the ring with a different Darby — but it’s a different Cody too. “I gained 14 real pounds during my hiatus, and I am continuing the bulking cycle through Full Gear all the way to Revolution. So Darby is now in there with a full-fledged heavyweight.”

The Young Bucks have a match against FTR for the AEW Tag Team Championships at Full Gear, and if they lose, they’ll never challenge for the title again. Rhodes did this with the AEW World title, but doesn’t think it’s a good move for the Bucks. He thinks that the tag belts mean too much and the Bucks are too good of a team to just throw that stipulation on somewhat carelessly.

There are two women’s matches on the show.

Allysin Kay faces NWA Women’s champion Serena Deeb, and the relationship with the NWA will continue. “We’re open for business. Our bridges are down and our doors are open,” he said. Rhodes noted that AEW boss Tony Kahn has a very good working relationship with Billy Corgan, the owner of the NWA, and they were able to work out the AEW appearance of Deeb and Kay, and previously, Thunder Rosa.

He doesn’t see there being any cross promotional pay-per-views, and that is where the doors close. “One thing I’m pretty sure we will never do, and I’m saying pretty sure, I don’t think we’ll ever do a cross promoted show where we’re running two different banners. We’re very proud of our own identity, doesn’t mean we won’t cross over or others won’t cross over.”

In the other women’s match, it’s AEW Women’s champion Hikaru Shida defending against Nyla Rose. Cody has heard the fans complaining about the lack of build. He said that there doesn’t always need to be a storyline, that sometimes two wrestlers will have a match because one is the champ and the other is the #1 contender, and that’s it. “I do understand that for the last 20 years, fans have been conditioned to think that every match is going to start with an invisible camera and a piece of cake in catering, and someone takes that last piece of cake, and now there’s drama, now there is a ‘storyline.’”

The main event features AEW World champion Jon Moxley defending against Eddie Kingston, who Rhodes said was the total package, with an ability to connect with the audience, amazing promo work, as well as a great wrestling ability. He also had lauded Ricky Starks. “I’m super happy that I’m the one who recruited them, but it’s just me who opened the door, they both are the ones who have run with the ball.”

Rhodes talked about AEW utilizing stables and managers. He said he’s worked hard to present wrestling legends as they are, not in their prime, but as great coaches. Arn Anderson has been coaching Rhodes, and according to Rhodes, “Nobody was harder and meaner to me when I first started and debuted as a television wrestler than Arn Anderson, and that was what I needed. Some people respond to positive reinforcement, some respond to negative. I needed that. I’m stepping in to such a role, in terms of being the son of the American Dream. My gosh, that’s an impossible hill to climb. Arn knew that, and knew what I would need to do and look at how long it has taken. That’s why it’s so important that he’s with me, and that’s why it’s so real.”

He talked about factions, describing the Inner Circle as a very traditional, powerhouse of a stable. “Those factions are genuine brotherhoods, comraderies and sisterhoods, and that’s what makes the difference. Really living and dying on each other’s success.”

When AEW began, Rhodes said that it was going to be a sport-centric product. Yet, a week ago was the Dinner Debonair segment with MJF and Chris Jericho dancing. He says it hasn’t changed, that UFC and boxing have real life drama based off who the competitors truly are. He says that he, personally, has stayed true to sport-centric, because that’s who he is as a wrestler. “I consider everything I do, me, personally, to be sport-centric. I honor my own identity by presenting myself as such because that is who I am. You talk about Dinner Debonair, that’s who Chris Jericho is.”

On the music front, it wasn’t Jericho and his band Fozzy, though. Rhodes said he’s game to use licensed music. “We have a wonderful in-house musician with Mikey Ruckus, we really do, and Mikey, not unlike AEW, is open, bridges are down, doors are open, to that crossover with some licensed music.”

Recently, Matt Hardy and Alex Reynolds have suffered some brutal injuries in matches, and Rhodes reminded the media that pro wrestling is a very dangerous sport. He said AEW has been making some changes to the way it handles health and safety. “Medical protocol is evolving with the company. Full disclosure, after this call, there’s a full talent, all personnel meeting with Chris Nowinski about concussion protocol.” He went on to talk about how important talent health and safety is in the wrestling industry. “Wrestling is violent, and I think some fans have forgotten just how violent it can be, but it should never be so violent that you’re injured.” 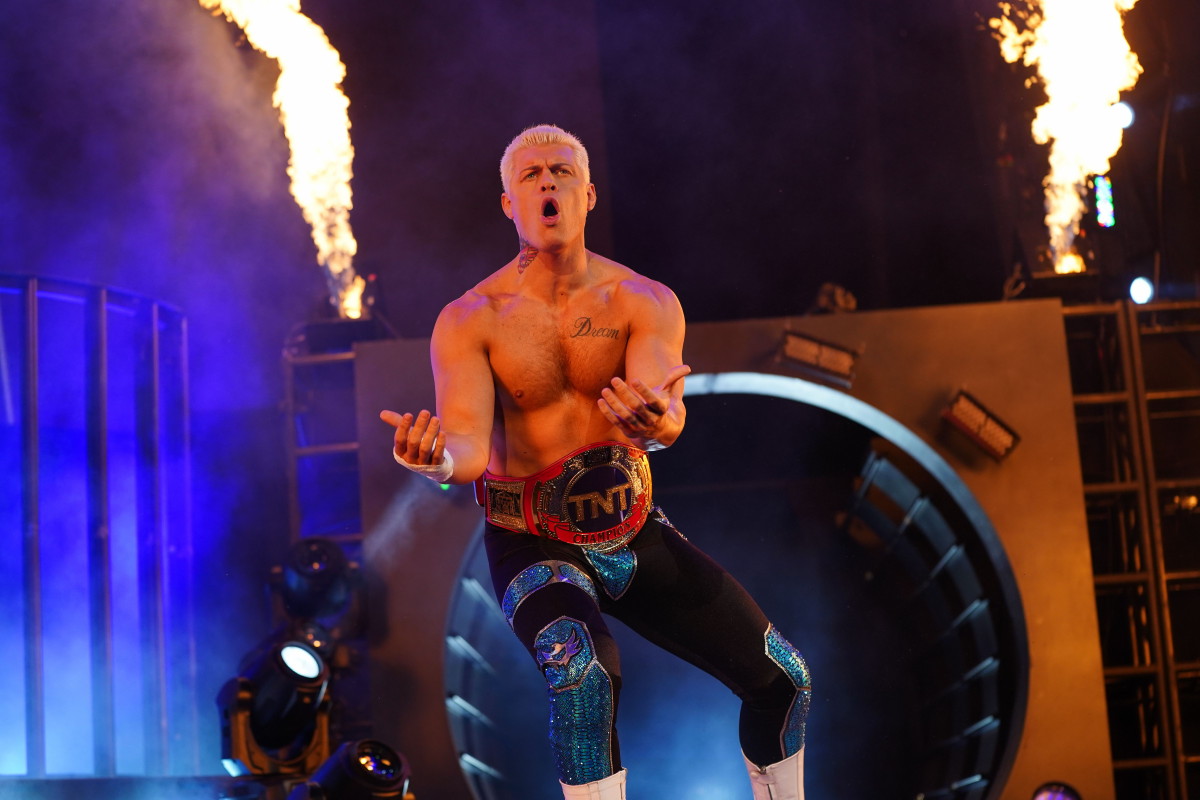 Cody comes to the ring at AEW Dynamite on November 5, 2020. Photo by Lee South / All Elite Wrestling

AEW Dark has been a great program that has been showcasing some amazing, often lesser known talent. The idea for Dark was Tony Kahn’s, to take wrestlers that are out of business due to the pandemic and present, in the words of Rhodes, “a staggering amount of matches.”

“Dark is another really wonderful space for our coaches and talent to go out there with super long leashes and have a lot of fun,” he said.

Rhodes is very thankful for the success of AEW, but he doesn’t take it lightly. He’s working hard in all different areas of the company, saying that he gets a great feeling helping others. “When you produce something else, when you write something for somebody else. When you give them a little thing and next thing you know it’s turned into a whole story. That experience, I know that I like this job, because I like that.”

AEW Full Gear is this Saturday, October 7, and is available on pay-per-view and B/R Live, and Fite TV in the UK.