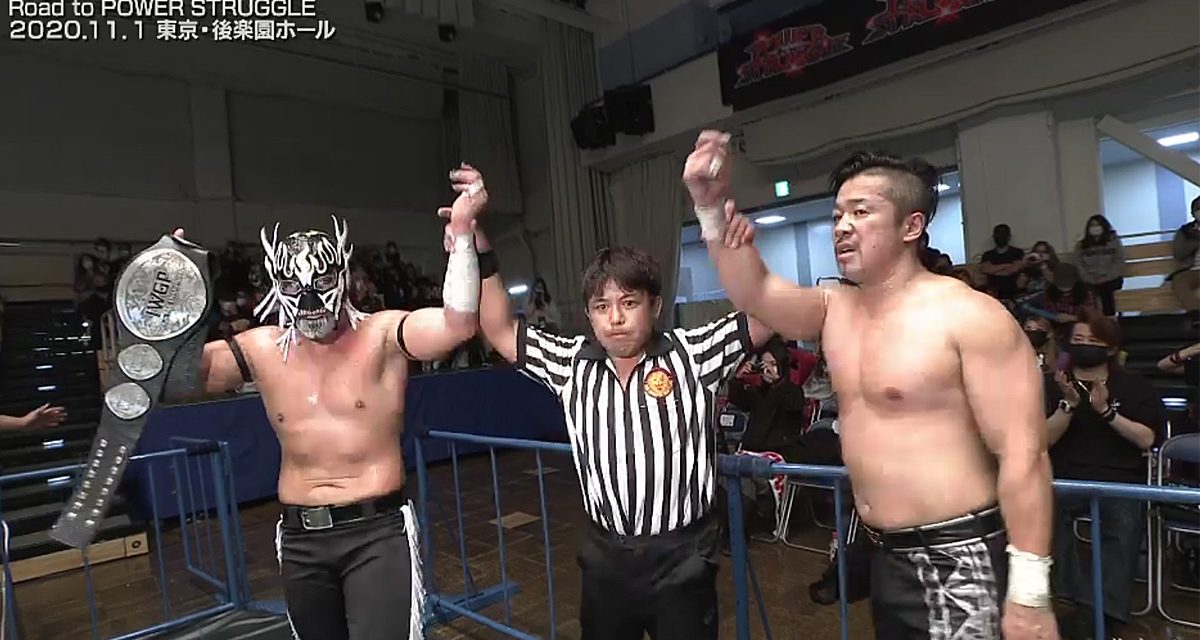 It was a laid back night as NJPW kicked off its Road to Power Struggle tour. Nothing really stood out on the card except the main event. Suzuki-gun (Yoshinobu Kanemaru and El Desperado) defended their IWGP Junior Heavyweight Tag Team Championships against the Los Ingobernables de Japón team of Bushi and Hiromu Takahashi.

Bushi dropped Desperado with a neck breaker then tagges in Hiromu. Desperado and Hiromu lit each other up trading chops in the middle of the ring. Desperado put an end to things with a trusty rake to the eyes. Hiromu avoided the double team by shoving Desperado into Kanemaru and then making it so Kanemaru hurricanranaed Desperado. You had to see it to believe it. Hiromu shotgun drop kicked both men in a corner. Kanemaru dodged Hiromu as he leapt off the apron. Hiromu crashed and burned on the floor.

Kanemaru threw Hiromu into the ringside barrier, caught him as he bounced off and suplexed him on the arena floor. Back inside the ring, Bushi pulled off his own solo double-team move. He bulldogged Kanemaru while shotgun drop kicking Desperado.

Bushi sets up Desperado on the second rope and hurricanranas him to the mat. Bushi follows up with a Canadian Destroyer which surprisingly only gets him a two count. As Bushi leaps off the ropes for MX, Desperado pushes Red Shoes in the way. Red Shoes is hurt and needs to be taken to the back.
The new official stops Desperado from hitting Bushi with the tag team belts. Desperado counters MX with his Onryu Clutch submission. Kanemaru saves Desperado from being pinned.

Desperado catches and then awakwadly drops Bushi as he tries another MX off the ropes. Desperado pins him with Pinche Loco.

Yuya Uemura wins another match with that cool suplex of his.

Yoshi-Hashi and Goto double team Douki for the win. Taichi chokes out Goto with his microphone stand and Sabre Jr. locks up Yoshi-Hashi in one of his many enthralling submission holds. Yano makes the save with a turnbuckle pad. Yoshi-Hashi and Goto taunt Dangerous with the IWGP Tag Team Championships. An angry Taichi tosses the official over the security railing. 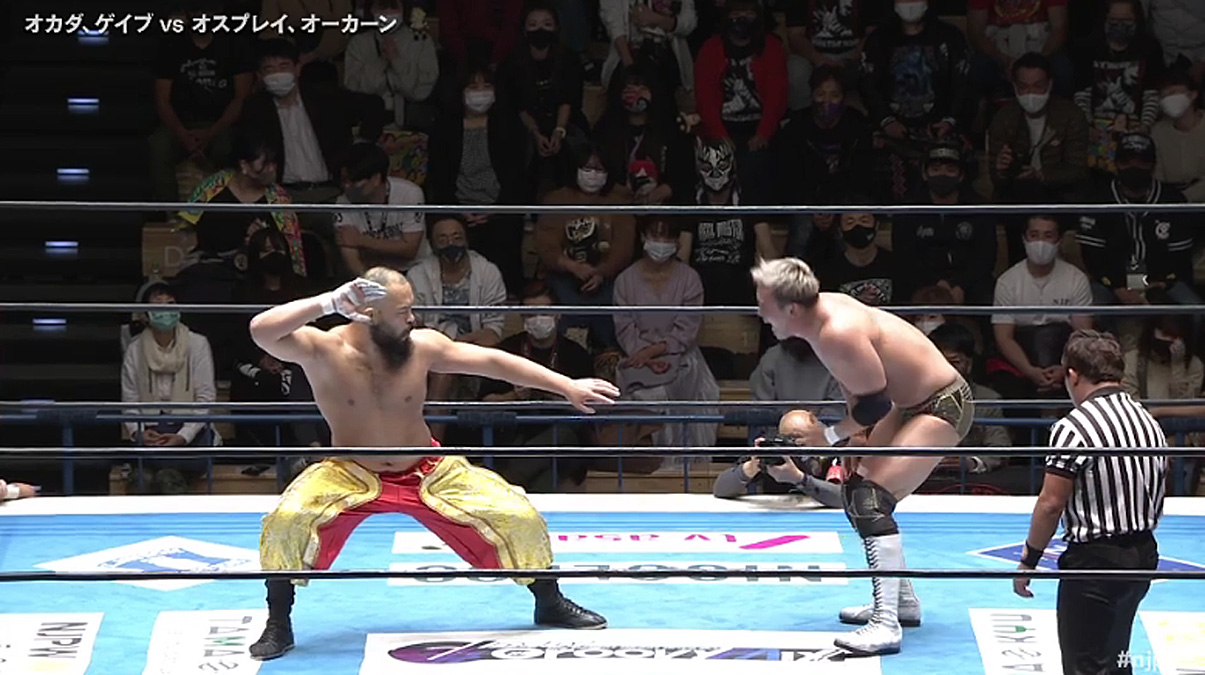 The best match of Kidd’s career in NJPW. Khan and Ospreay jump start the match attacking Kidd and Okada before they can even remove their gear. Kidd and Okada quickly turn the tables back in their favour. Great-O-Khan acts as Ospreay’s bodyguard stepping in to protect him when he can. Khan pins Kidd with a brainbuster and his claw chokeslam deal. Okada helps Kidd to the back.

Tanahashi and White have a bit of a pose down before the match starts. White welcomes Chase back to Bullet Club and NJPW. Owens pins Honma with the Package Piledriver as the announcers chant…Chase is back! Jay White beats up some Young Lions while Owens shows off the message on his wrist tape which is in tribute to Tracy Smothers. 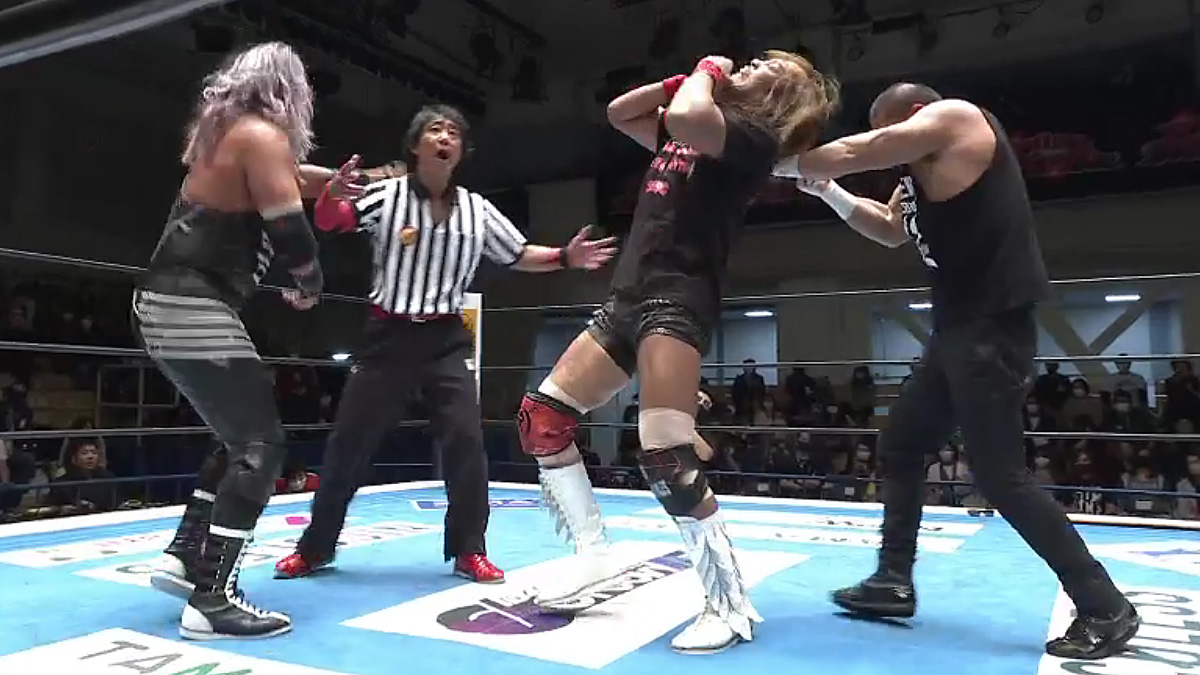 Naito complains to Red Shoes that Dick Togo shouldn’t be in the ring or at ringside for that matter. Yujiro clobbers Sanada in the head with his walking stick. Togo chokes out Naito right in front of Red Shoes with his garotte. Evil slings Red Shoes out of the ring. Red Shoes disqualifies Bullet Club. Evil hits Naito in the head with one of the championship belts.

Road to Power Struggle Night One

A run of the mill night of action with no real surprises even though the matches were decent.