Champions of the Galaxy’s Tom Filsinger on 34 years of magic, might and mayhem 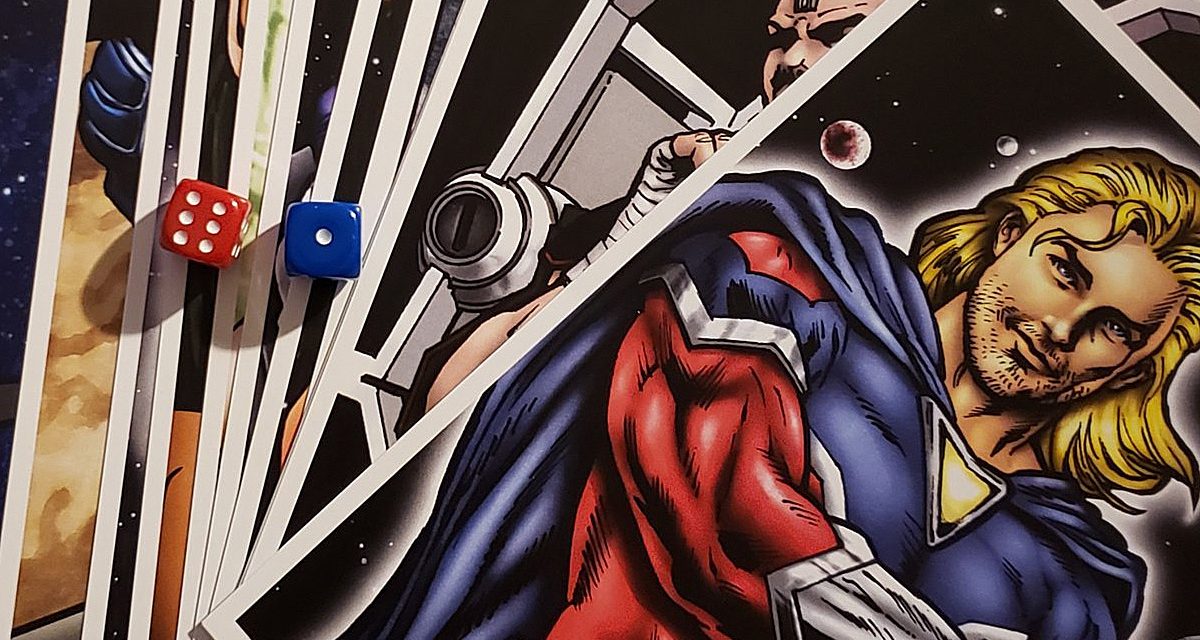 Inspired by his love of professional wrestling and comics, Tom Filsinger created a wrestling promotion 34 years ago. Even though it doesn’t have any television or digital presence, contracts to haggle over, or even a physical ring, Champions of the Galaxy remains as popular as it has ever been.

In conversation with SlamWrestling, Filsinger had some thoughts on the matter.

“I think there are several reasons, but one is the game provides a sense of community with other fans, where players can play together, but also compare match results with each other when they play alone. It’s a great community of fans and the game allows the use of imagination, a very powerful force. Finally I would like to think the game is just simply a great game with fast-moving wrestling action,” said Filsinger.

When wrestling video games were in their infancy in the 1980s, Champions of the Galaxy was one of the first role-playing, table top games to give fans not only the feeling of competing in a wrestling ring but controlling every aspect of a promotion.

With such superstars as Endgame, Chaos, Thantos and the Bounty Hunter, Champions of the Galaxy is the best of professional wrestling combined with Filsinger’s love of sci-fi and comic books.

Although asking Filsinger to pick his favourite character is like asking him to pick a favourite child, he admits that Wolf, Godsend and Basilisk are among his most prized creations. The game has introduced real wrestlers into the experience as well but Filsinger is still working on bringing two icons into the Champions of the Galaxy family. 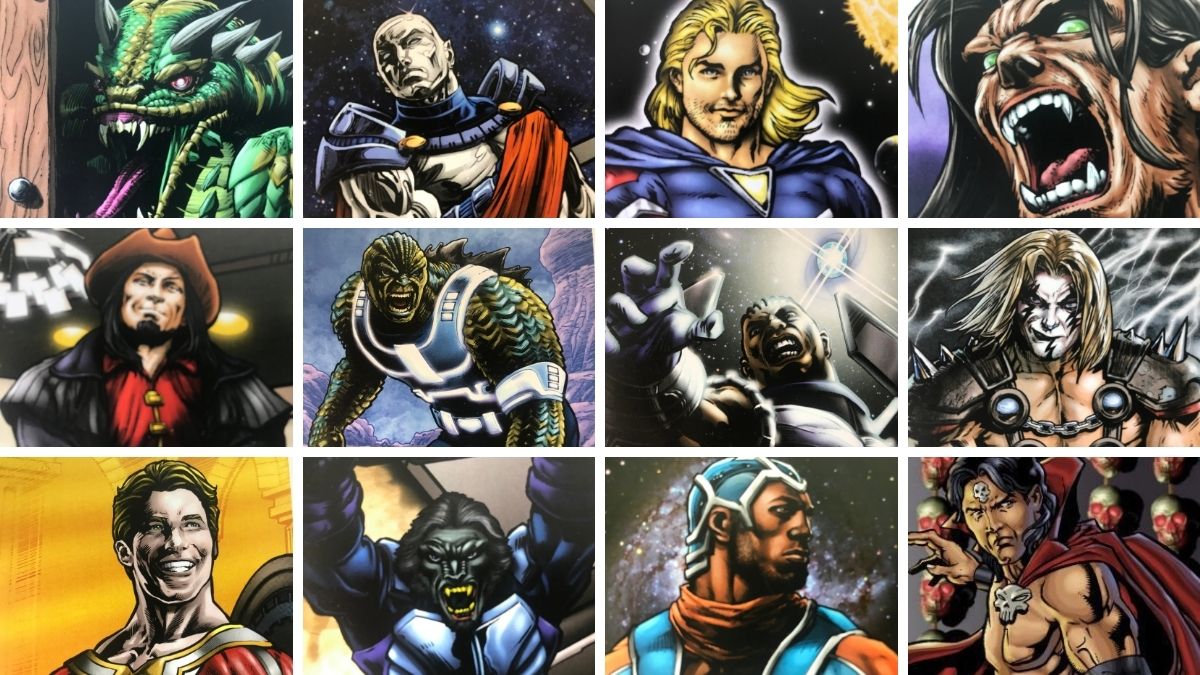 “We would have loved Ric Flair and Hulk Hogan. We won’t stop trying!” said Filsinger whose favourite grapplers growing up were Bobo Brazil, Johnny Valentine, Jimmy Snuka, and Don Muraco.

Filsinger is proud of the legends that he has been able to incorporate into the game.

“We are very pleased to continue to get awesome signings. For example we released Abdullah the Butcher last year, one of my all-time favorites. We just released a very special game edition called George Tragos/Lou Thesz Professional Wrestling Hall of Fame in conjunction with the Hall of Fame and it features stars like Jack and Jerry Brisco and Dan Severn. It is a great tribute to the past,” he said.

Knowing they face competition from video games especially with younger players, Filsinger introduced an online component to the game that makes the experience more fluid in many regards without taking anything away from the overall gameplay.

“A lot of fans enjoy playing the games online because it saves them the time of actually rolling the dice for a match and they can concentrate on title defenses, angles and feuds. The system is easy to use and many fans play both ways, rolling on the tabletop but also playing online. It increases their options,” said Filsinger. 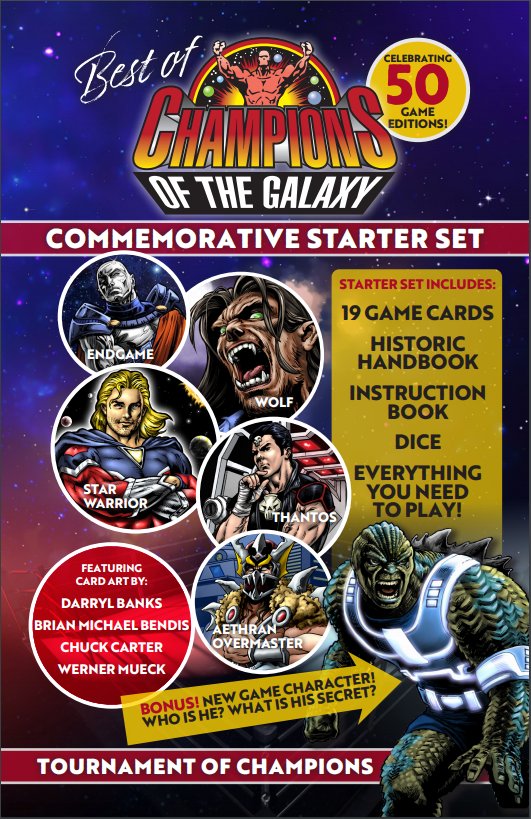 Champions of the Galaxy’s incredible characters are brought to life not only by the detailed bios but the stunning art work that has been a mainstay of the game since the very beginning. For the Commemorative Starter Set, Filsinger worked with veteran artists Darryl Banks (Legion of Super-Heroes, Green Lantern, co-creator of Green Lantern Kyle Rayner), Chuck Carter (Myst, founder and owner of Eagre Games), Werner Mueck and comic book legend Brian Michael Bendis, whose run on Superman and Action Comics ends this December.

“It is always an honor and pleasure. Currently I’m working with Darryl Banks (Champions of the Galaxy) and Werner Mueck (Legends and Indies) and both are fantastic to work with. We take our time to make sure we get the drawings where we want them to be. It is a very intricate process including poses, colors and backgrounds,” said Filsinger who would still like to develop a Champions of the Galaxy app or a movie or TV show in the future.

Champions of the Galaxy celebrated 50 game editions with a stand-alone,
special commemorative starter kit this year, which has everything a beginner needs to play including two new characters: The Basilisk and Orrus the Unstoppable.

“I am most proud of providing hours of pleasure to so many game fans internationally for over three decades. I love everything that makes the world a more fun place and encourages imagination. I am also very proud to be part of wrestling pop culture,” concluded Filsinger.