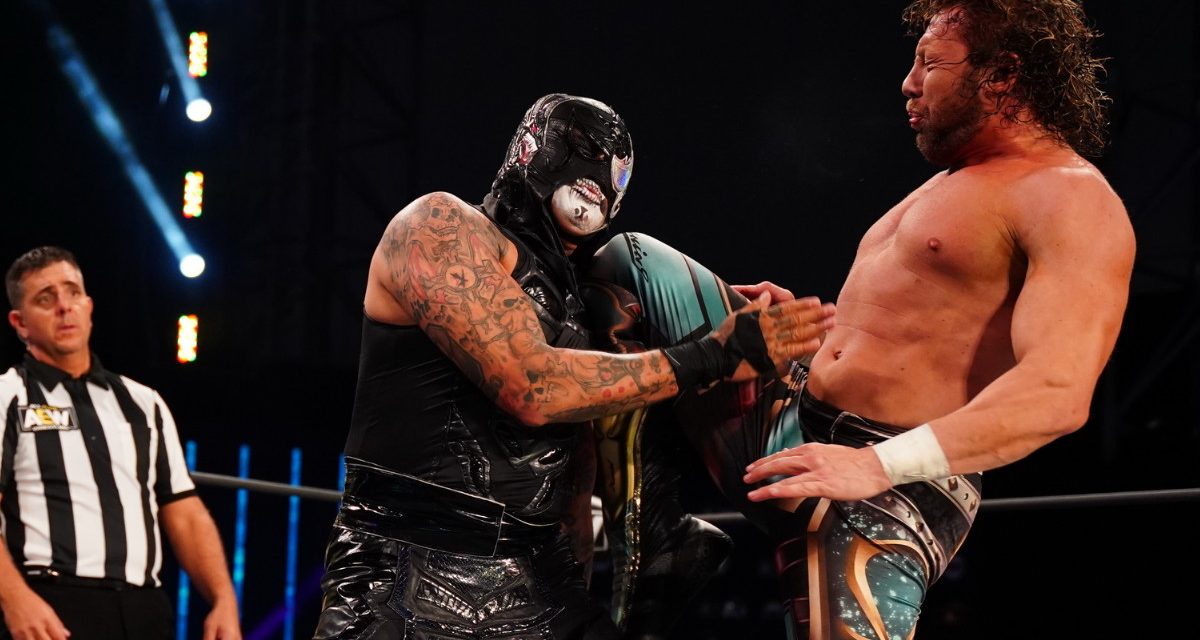 Usually, things tend to go MJF’s way. In the interview that starts tonight’s episode of AEW Dynamite, that’s apparent again, as he reveals that if Wardlow makes it all the way through the World Title Eliminator Tournament and dethrones the champ, MJF gets the belt. Because you see, Wardlow works for him, so Wardlow’s property is his property. The big man reluctantly agrees, but a much smaller wrestler has a bone to pick with MJF. Said wrestler is Sammy Guevara, who vows to make sure that MJF never joins the Inner Circle, and isn’t afraid to get in MJF’s face when the inevitable verbal arrows are fired. File that one away for later, particularly with the town hall coming up later about whether MJF will join the group. For now, Wardlow has business in the ring.

People, and by that I mean people active on social media, really seem to like Wardlow, which is impressive since he has barely wrestled on Dynamite considering how long he’s been on the roster. This could be a good spotlight for him even in a loss, and he is made to look strong by tossing Page around during the opening minutes of this match. Of course it works well for Page to have to rally against a monstrous opponent too, so he certainly earns his spot in the final. And I think we know who he’ll face at Full Gear …

Though Jon Moxley says he has been defending his AEW World Championship throughout his reign, he intends to weaponize it against Eddie Kingston instead. The way he sees it, there’s no room in AEW for this version of his former friend. Before his match, Kingston responds by calling Mox a coward since he’s not on hand tonight. He does hope Moxley is watching, however, for a preview of what he plans on doing at Full Gear. And about that preview …

I’ve seen complaints at times that AEW matches that should be squashes are not, with lesser grapplers pushing the top stars harder than they should. That’s a fair critique, but this should really not be a squash anyway because there’s no reason to bury Sydal. However Kingston needs to win, and he does, submitting Sydal with a rear naked choke. Kingston says “I’m sorry Mox” after securing his victory.

Somewhere other than the arena, Excalibur talks to the Young Bucks and gets Matt Jackson to say he’ll be good for Full Gear despite what FTR did to his ankle last week. He also says he has no regrets about what they’ve done the last few weeks, blaming the tag team champs for bringing out this side of them. FTR is live via satellite, but after saying they also aren’t worried about jeopardizing the dream match with their assault on Matt because the titles mean more to them, they decide to leave the interview as they are upset that Excalibur isn’t asking them more questions. Once the champs are gone, the Jacksons reveal that the bout at Full Gear has even higher stakes than we’ve been led to believe: If the Young Bucks don’t win the titles, they will never challenge for them again.

If you live in the U.S., you’re probably tired of town halls by now, but the one we’re about to see on Dynamite is business, not politics. Chris Jericho comes to the ring first, accompanied by all the Inner Circle except Jake Hager, who we’re told is preparing for an MMA fight. MJF joins them shortly, and Tony Schiavone and Dasha Gonzalez are your moderators tonight. Luchasaurus leads off by asking how MJF will increase the earning potential of the Inner Circle, to which he displays a chart that looks something like the Stonks meme. Dr. Britt Baker points out that MJF has a lousy track record of friendships in AEW, something that Jericho seems wary of himself. But MJF promises he would never turn on them and that his joining would result in a whole lot of money and gold. Peter Avalon says “I’m just going to shoot my shot” and asks to join the Inner Circle, which gets him a well-deserved round of laughs. Next up … wow, it’s Eric Bischoff. To his three-pronged question, MJF says the Inner Circle would benefit from his friendship, they could teach him to be a better team player, and that … actually he never really answers the third part. But the upshot of all of this is that Jericho offers him a chance to join the group after all, but only if MJF can defeat him at Full Gear. To add even more spice to this mixture, Ortiz reminds MJF that he and Guevara don’t like him, and that they are challenging MJF and Wardlow to a match next Wednesday.

Team Taz still wants an answer for Will Hobbs. Guys, if he isn’t texting you back, it’s probably not happening.

This is quite the logical pickle. Cassidy doesn’t really need another good showing in a close loss, but he’s also over enough that he doesn’t need a title right this second. On the other hand, it would be strange to see Cody drop the title he just won back, and given his history with Darby Allin, who awaits the winner at Full Gear, you’d think he was coming out of this with his belt. Then there are the lumberjacks, who could tilt this in either direction. That’s a roundabout way of saying I think Cody is winning but I can’t be 100% sure. Are we headed for hijinks, then? We sure are, with both John Silver and Arn Anderson getting shots in to soften Cassidy up for a Cross Rhodes. Allin is watching from the upper deck of Daily’s Place with a spotlight on him. How very Sting-like.

Kip Sabian and Miro act like they’re going to bury the hatchet with Best Friends, but in the best Halloween spirit, it’s just a trick. Remember folks, this feud started from

This is a little bit of a surprise. Didn’t expect the NWA strap to be defended by anyone but Thunder Rosa, but apparently the deal the promotions had is not just for her. This is a fine, physical encounter that unfortunately is interrupted by a full commercial break, but Deeb retains.

Speaking of women’s champions, Alex Marvez tells Hikaru Shida that Nyla Rose is the No. 1 contender for her title but is refusing to wrestle anyone until she gets a championship rematch. Voila, now she does! That was easy.

Before we can even ponder what VSK stands for, Spears wins this one. Squash city.

After the bell, Spears gets heckled by a costumed person in the crowd, but the mystery person unmasks to reveal himself as Scorpio Sky. One TKO later and Sky stands triumphant.

Omega’s over the top entrance remains awesome, particularly since Justin Roberts has a long list of new superlatives to announce his arrival. In case you’re wondering, Penta got this spot because Rey Fenix was indeed injured during his victory in the battle of brothers a week ago. Under his shirt, Omega sports the AAA Mega Championship he won from Fenix, which infuriates the other member of the Lucha Bros. Jim Ross says that Omega is back to his “Okada level,” but he has a great foil to play off here as well. Indeed, this matchup is bringing the best out of both men, not the least of which is Penta hitting a Canadian Destroyer off the middle turnbuckle onto the ramp, followed by a package piledriver in the ring. But naturally, Kenny prevails in the end, ensuring he will face his former partner in the final at Full Gear. See you in seven, but Full Gear before that.

If you didn’t enjoy tonight’s main event, I don’t know what you want out of your weekly wrestling TV. The last two weeks have reminded everyone why the Lucha Bros. are fantastic, and this Kenny Omega is one that fans have been clamoring for. There were a few slower moments tonight, but overall it was a very good two hours, and the Full Gear card is shaping up to be excellent. One more Dynamite to go.