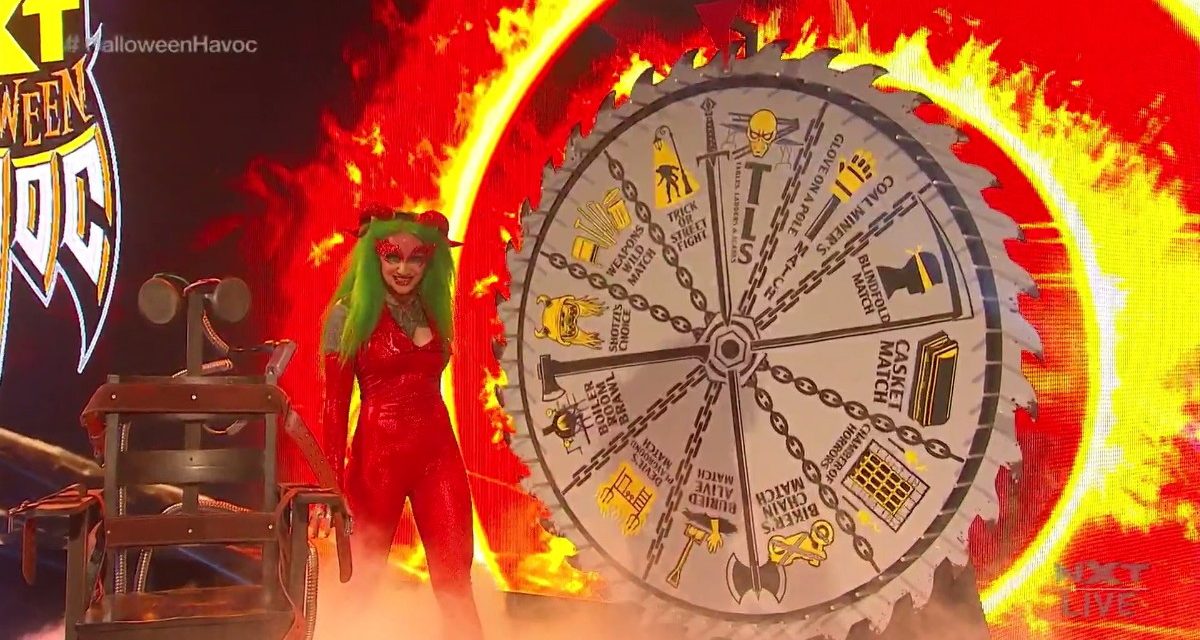 After a two-decade hiatus, the Halloween Havoc moniker returned to professional wrestling under the NXT brand. Hosted by Shotzi Blackheart and the returning ‘Spin the Wheel, Make the Deal’ gimmick, Halloween Havoc 2020 was headlined by two championship bouts, plus a truly insane Haunted House of Terror Match between Cameron Grimes and Dexter Lumis. While the latter portrayed the more demonic side of the holiday, the majority of this show displayed the jocular characteristics of WCW’s original events. This included campy decorations, humorous costumes, and even a Michael Hayes cameo. For a weekly NXT show, the promotion pulled off a rather enjoyable two hours that leastways prepped the people for this years unconventional Halloween.

The champion is accompanied by a ripping electric guitarist playing along to his theme song while the challenger literally rips apart the inflatable pumpkin on stage. These two had an awesome opening bout previously, and they’ll likely do the same tonight. Hostess Shotzi Blackheart spins the stipulation wheel, and the bout becomes a Devil’s Playground Match, basically a Falls Count Anywhere Match. Priest gains the opening advantage doing Stinger Splashes across the ring, but Gargano turns the tides by sending his opponent into the steps. Gargano grabs a kendo stick from under the ring, unknowingly returning to Priest with a baseball bat before break.

The challenger dives off the stage and swings away with the stick until delivering Sliced Bread on the steps and brawling past the barricade. A Halloween mannequin pops out of a nearby casket, and since it’s the Gargano way, he superkicks the mannequin. Into the backstage area, he sprays Priest with a fire extinguisher and pours trash over him preceding commercial. Gargano clubs the champion with a garbage can atop the stage setup before Priest attempts The Reckoning, but the latter gets attacked by a cloaked masked man who gives Gargano a tombstone. Priest crashes off the stage and through some decor letting Gargano cover for the victory.

Commentator Vic Joseph is dressed as Waldo from Where’s Waldo as partner Wade Barrett dons his Bad News Barrett attire. They recap the finish to last week’s NXT as the returning Pat McAfee, flanked by Oney Lorcan and Danny Burch, are followed to Gorilla.

Cameron Grimes paces backstage and is approached by General Manager William Regal who insists he head to the parking lot. For someone who boasted not being scared of the Haunted House of Terror, Grimes is anxious as hell.

McAfee and the NXT Tag Team Champions Lorcan and Burch are standing in the ring. McAfee calls his NXT Takeover: 30 debut the greatest debut ever and insults the internet wrestling fans who believe it. Since he still has beef with Adam Cole, McAfee explains his relationship with Ridge Holland who attacked the former at Takeover: 31. And for a less sensical explanation, he details his thought process for recruiting the two guys that broke Holland’s leg. Out comes the Undisputed ERA’s Kyle O’Reilly and the returning Pete Dunne with chairs in hand as the trio retreats. But before things seem to settle, Dunne hits O’Reilly with the chair!. The four men beat O’Reilly down and stand over the fallen body, making for a great visual. This apparent faction has some promise!

Grimes begins to plead with William Regal to forfeit the match, but the latter instead nonchalantly leads him outside. A grimey white van appears, and out pops a flamboyantly dressed Michael Hayes telling Grimes to get in. Ironically, Grimes anxiously says, “I hate rednecks!”

Escobar wears purple tights in commemoration of Rey Mysterio’s Halloween Havoc ‘97 gear, while his crew is painted with half-skulls for Dia De Los Muertos; these honestly look really cool! He immediately pummels his opponent and talks some trash before Atlas strikes back. After making his comeback, Atlas hits the Cartwheel DDT on Escobar who puts his foot onto the bottom rope. The former dives onto his opponent’s ringside crew, but before he can capitalize, Raul Mendoza attacks behind the ref’s back. Escobar hits his finisher for the pinfall victory. Not much to say about this one.

Grimes finally arrives at the location, comical as ever, searching for Lumis and making witty remarks at the horror elements around the house. Lumis eventually appears and sends his opponent into some glass, making him retreat into a bathroom. In the middle of this cat-and-mouse chase, Grimes sees a feminine figure behind the shower curtains and takes his vest off, instead being met with an actual zombie… or demon — one of the two — and runs off. Lumis comes through a window and attempts to choke out Grimes who starts fighting back, but the latter is once again plagued by more zombie-demons. He abandons ship and gets back into the van, which wouldn’t you know, is being driven by Lumis. “To Be Continued” flashes on screen as Grimes rushes off into the woods. This definitely wouldn’t have worked without Grimes; he was absolutely gold.

Later in the night, Grimes is seen running through an empty street, eventually returning to the Capitol Wrestling Center. He collapses in the decorative graveyard and is flanked by even more zombie-demons. He retreats to the smoke-filled ring and gets Spinebustered by Lumis. The latter throws a now-definitive zombie at Grimes and chokes him out to finish the match… or whatever it’d be called. The zombies surround Grimes as punishment for carrying this entire thing.

Tale of the Tape is presented for the upcoming matchup, and Rhea Ripley makes her entrance before commercial.

The competitors tug and bullhorn to start the bout as commentary mentions “redefining the women’s wrestler in NXT.” With these two exceptional wrestlers serving as trail blazers, modern women’s wrestling can evolve into impressive collisions like this one. They trade hard-hitting strikes and effective maneuvers like Ripley’s forceful dropkicks. Gonzalez catches her opponent’s outside sommersault and sends her into the barricade before commercial. She cinches a unique back-stretch to continue the pressure, but Ripley makes a comeback for two. Gonzalez returns with an awesome Tour of the Islands, scales the ropes, and tosses her opponent off the top turnbuckle for another two. Ripley sends her into the corner and hits the Riptide for the pinfall victory. This is what women’s wrestling should highlight — great showing for both.

Drake Maverick cuts a backstage promo dressed as Hollywood Hulk Hogan and even calls the female correspondent Mean Gene. The following is even funnier: two colossal trainees cosplaying as The Giant and The Yeti engulf Maverick as Killian Dain, dressed as The Shockmaster, makes an entrance. The latter trips Maverick before the segment ends.

The two competitors immediately brawl on the outside as LeRae pulls out a table and some ladders. They make their way towards the announce table, and LeRae hits the champion with a laptop, allowing her to construct a ladder bridge. Shirai regains control by kneeing her opponent into the steps and introduces the chairs before commercial. Two tables with chalk outlines drawn onto them are placed adjacent to the apron, two ladders and a pile of chairs are set inside the ring. Shirai attempts the top-rope Moonsault but instead crashes into the chairs and then misses the running knee into the ladder. They perform multiple spots against one another that are seemingly ineffective when briskly moving onto the next. They fall onto the tables before the same masked man from earlier helps LeRae climb the ladder. This time, Shotzi Blackheart makes the save. The champion pushes LeRae off the ladder and through the aforementioned ladder bridge, retrieving the hanging championship for the victory.

This was a fun show. It paid tribute to the Halloween Havoc’s of the past while making a statement of its own. But even filled with themed stipulation matches and cinematic angles, it’s nothing we haven’t seen before.