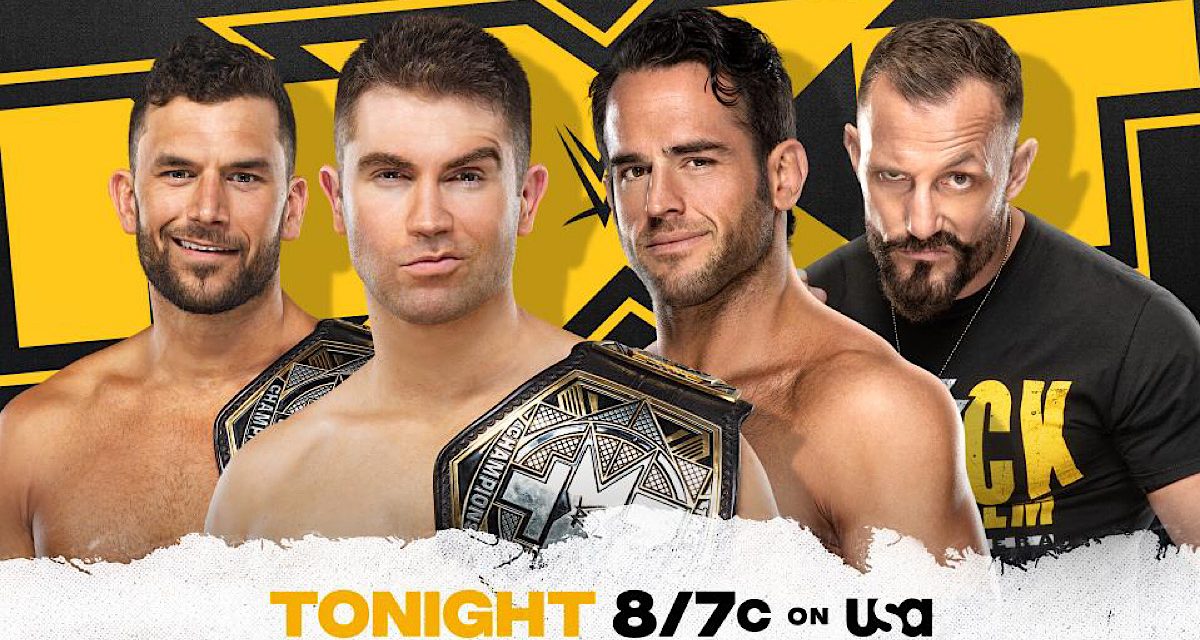 Initially serving as the precursor to Halloween Havoc next week, tonight’s episode proved to shock the system of NXT. Scheduled as the night’s main event, NXT Tag Team Champions Breezango were set to defend against the Undisputed ERA. Throughout the show, the ‘ERA members dropped like flies in two mysterious backstage attacks, forcing the team of Danny Burch and Oney Lorcan to fill the vacant spots. As the headline states, that match was interrupted by a returning celebrity attraction, ending this show on an unforeseen note.

In regards to the Halloween Havoc buildup, it’s nothing special. But obviously the lineup and matches will pull through, much like the majority of NXT tonight. Along with the main event, a crazy six-man tag and solid triple threat supported the length of this episode, making it much more enjoyable than the previous weeks.

Ciampa blindsides the Dream and initiates this triple-threat brawl. The former gains the clear opening advantage, targeting Dream’s casted hand and raking Kushida’s eyes. He eventually gets them stacked in the corner and goes rogue with chops before Dream hits the DVD preceding commercial. Kushida cinches an outside armbar on Dream, making him tap for mercy, and the Japanese applies the same to Ciampa inside. Dream dives onto the offender with the Purple Rainmaker, but Ciampa breaks the count. They trade strikes, Kushida dives onto both, and Ciampa delivers a sneaky Willow’s Bell before getting Superkicked by Dream. The latter conks Ciampa with his cast which allows Kushida to connect with a German to win.

The following is Moon’s first singles bout since returning to NXT, and it couldn’t be less exciting. She cinches a Crossface and transitions into an Ankle Lock before Kamea makes a short comeback. Moon hits a Codebreaker and submits Kamea with a modified facelock. This ‘new attitude’ just doesn’t work. During her post-match celebration, Dakota Kai attacks from behind.

Officials surround Bobby Fish backstage; he was apparently taken out by an unknown attacker. During the next match, correspondent McKenzie Mitchell announces that Fish has injured his knee and is currently in the hospital.

Theory’s in his element bumping like crazy for Reed. The former once again delivers the always-impressive Rolling Dropick (he backrolled this time!) and gains control. Reed catches his opponent with a Powerslam and Senton and begins to scale the ropes. After knocking down Theory, the 330-pound Reed flies onto his opponent for the pinfall victory. A broken Austin Theory takes the mic before Reed can leave, saying that he’s the future of NXT and WWE. Theory reiterates his already-accomplished career at just 23 and demands a rematch. For the consecutive time, Theory loses to Reed in quick fashion.

Xia Li and Kacy Catanzaro are backstage. They’re both interviewed preceding their match against one another, which is odd considering they’re pretty friendly about it.

Austin Theory is followed in the parking lot. He claims that he’s finished. He quits.

The latter faction retreats proceeding the bell, but a slugfest eventually commences. Joaquin Wilde is punished by each opposing member until Scott dives onto all of LDF before break. The heel group works together on Adonis, cutting the ring in half before Atlas receives the hot tag. Surprisingly, this comeback was actually hot! Raul Mendoza pulls Scott outside, and Atlas hits a scary-looking Spanish Fly onto the mass. Scott hits the JML Driver, Wilde breaks the pin, and Ashonte inadvertently takes out the former. Escobar hits a bullet-speed dive onto Scott atop the announce table which follows with Atlas’s Cartwheel DDT off the platform! Meanwhile, Mendoza and Wilde deliver a double-team on Ashonte for the pinfall victory. This wild bout was definitely worth a watch.

Another episode of the Gargano House features Johnny Gargano and Candice LeRae practicing for ‘Spin the Wheel, Make the Deal’. They seem pretty anxious about their upcoming Halloween Havoc matches, which brings up the question: who let these invisible cameramen into their home?

This oddball couple thing has already run its course unfortunately. Canada’s finest tag-team export to NXT, Ever-Rise, takes easy control on Maverick before Dain makes the blind tag. He squashes his opposition until Chase Parker targets the leg, chopping down the tree. On the outside, big-mouth Matt Martel calls Maverick a loser and clearly fires him up. Maverick takes a chair and lets loose on Ever-Rise as Dain looks furiously upset… until actually expressing his gratitude for his partner’s outburst. Dain doesn’t dance along to their upbeat theme song though.

Officials surround another downed Undisputed ERA member, this time Roderick Strong. This leaves Kyle O’Reilly partnerless heading into tonight’s main event title match. He offers the title opportunity to Danny Burch and Oney Lorcan, but since the ‘ERA beat them square last week, they offer to tag with him instead; O’Reilly storms off. General Manager William Regal declares Burch and Lorcan the official replacements anyhow.

Commentary claims this match was signed “in the spirit of competition”, which seems to be the biggest problem regarding NXT’s women’s division. Catanzaro’s strikes are simply embarrassing. She can obviously pull off the flips, eventually rolling her opponent up for the victory. Li attacks Catanzaro after the match before Raquel Gonzalez enters the fray, towering over everyone. Gonzalez is the clear highlight in this entire segment. She cuts a promo on Rhea Ripley heading into Halloween Havoc.

The eccentric Cameron Grimes is interviewed about his Halloween House of Terror Match against Dexter Lumis next week. Coincidently, Lumis peers through a window throughout the whole interview.

A video package hypes ‘Spin the Wheel, Make the Deal’, specifically for Io Shirai against Candice LeRae next week.

Timothy Thatcher conducts the first ever Thatch-As-Thatch-Can session inside the NXT ring. His poor student for tonight is new NXT-signee Anthony Greene. Thatcher wrenches on his student, refusing to break the hold. Instead of conforming once again, Greene goes off on Thatcher, attempting to choke him out. Thatcher orders a referee and cheap shots Green before the bell. He stomps away on Greene and strikes him into the corner. Thatcher applies the single-leg Boston for the quick tap.

Fandango and Lorcan lock up with the latter gaining control. Tyler Breeze and Burch tag in and brawl on the outside; the champion throws his opponent’s leg into the post before break. Back from commercial, Fandango makes a comeback on the opposition, and Breeze dropkicks Lorcan mid-dive (albeit he completely whiffed). Burch sends the champion into the barricade letting Fandango capitalize with a Falcon Arrow and Leg Drop for two. Burch and Lorcan apply simultaneous submissions on Breeze before his partner makes the save. All men are down, and Breezango hits Double Superkicks on the opposition, letting Fandango set up the Leg Drop once again.

However, a masked man in black pushes him off the ropes, and Burch low-blows Breeze behind the refs back. Burch and Lorcan hit their double-team finisher to capture the championships! Very well deserved for these two. The masked man enters the ring to celebrate with the new champions, revealing himself to be the returning Pat McAfee! He mocks the Undisputed ERA with their signature pose to close the show. Yes!

Shock ending! Pat McAfee is back on NXT, and that’s good enough for me. Burch and Lorcan finally got their long awaited championship win, and overall, a decent precursor to Halloween Havoc.