AEW Dynamite: Chris Jericho and MJF sing for their supper, while a Bucks-FTR showdown looms 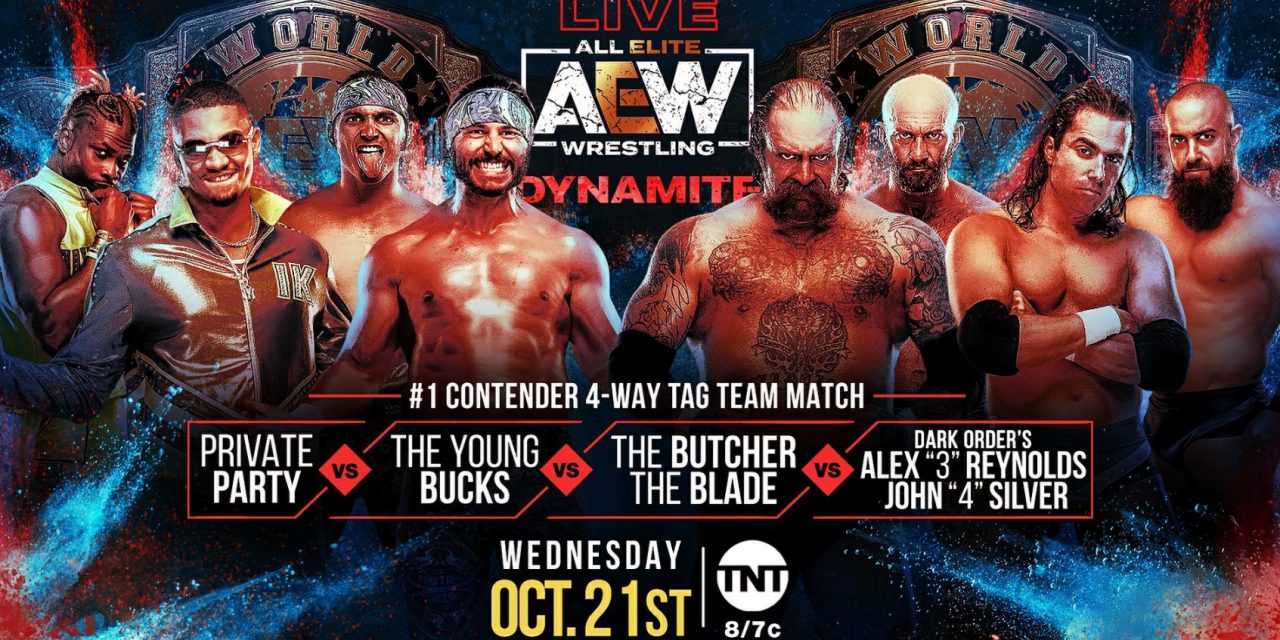 What’s an AEW World Championship title shot worth? Certainly going through three other men in a tournament, which starts tonight. We’ll also learn which tag team will challenge FTR for their belts at Full Gear, and in a nice bit of symmetry, the winning duo will also have to get past three other teams to do it, albeit in just one match. Let’s call this a table-setting episode of AEW Dynamite, particularly with Chris Jericho and MJF set to dine on steak together, as we go live to TNT.

Having a tournament for a shot at a championship when other wrestlers get them by fiat or simply by asking for one is one of pro wrestling’s sillier conceits. Nonetheless, there are some interesting matchups in this one, and I’d count this among them. Jim Ross notes that “we really don’t see a lot of Wardlow on Dynamite,” which is true — he hasn’t had a ton of matches and is sort of pigeonholed as MJF’s muscle. On the other hand, we know Jungle Boy can go and is steadily improving to boot. And then my cable feed cuts to commercial when it should be showing the end of the match, so … yeah. Anyway, Wardlow wins, that much I know.

Jon Moxley says no one was happier than him when Eddie Kingston signed with AEW, but he doesn’t know the whining version of Kingston who acts like the world owes him something. At Full Gear, Mox says he’s going to end this in a No Quit Match, which will leave Kingston with no one to blame but himself.

Well this is interesting. Befitting the cocky heel turn that Omega has been teasing for weeks, he comes to the ring with a long and humorous list of accomplishments read by the ring announcer, plus two women holding brooms who dance ahead of his arrival — and all of this is before his pyro. His opponent was initially supposed to be Joey Janela, who possibly would have lasted longer than Kiss, who takes a V-Trigger and a One-Winged Angel seconds after the opening bell. Kenny helps Sonny up, laying in a show of fake sportsmanship before leaving the ring. I’m not going to lie, I kind of like this. Omega was somehow a bit dull when AEW was finding its legs, and that should never happen.

Earlier today, Tony Schiavone spoke with Orange Cassidy about his time limit draw against Cody on the anniversary show, and Freshly Squeezed seems to have studied the Bill Belichick Big Book of Short Answers. Elsewhere, and back in the present, Cody is asked about a rematch with Cassidy next week and he feels good about winning again. He also discusses bulking up with more muscle to take on the bigger challengers he’s faced while defending the TNT title. Except Cassidy isn’t one of those guys. Just saying.

Before he can give his response to Moxley, Kingston says the Lucha Bros. will show everyone why they’re the best luchadors ever to do it. Also Butcher and Blade will win the tag team four-way match. Turning back to Mox, Kingston admits everything the AEW champ said was true. But the Mad King claims he had no choice, and that when he wasn’t a snake, he got nothing. Now that he’s “playing the game,” he’s getting a world title shot in an I Quit Match, and he’s never quit at anything. The way he sees it, Moxley will have to go to a deep, dark place to win, and Kingston lives in that place.

Kingston joins the announcers and reminds viewers that despite the fact that the Lucha Bros. are actual brothers, they made a name for themselves facing off against each other. They do start the bout with a show of respect, but also engage in a chop contest amidst the action to match wills. The announcers raise the idea that they might know each other too well and go to a time limit draw, which would eliminate both men. Wonder if that’s a bit of foreshadowing. Fenix looks like he took a rough landing on his head coming off the top rope, so hopefully he’s not concussed. He’s OK enough to hit a ridiculous springboard Spanish Fly, and he gets the win several minutes later. Fenix vs. Omega sounds acceptable to me.

In case you were wondering if the Best Friends feud with Miro and Kip Sabian over a ruined video game was still going to proceed, yes. Yes it is.

I almost forgot there was a Dark Order team in the tag team four-way, and that Colt Cabana was in the tournament. They all feel pretty good about the opportunities, even though John Silver is would pretty tight. No, scratch that, really tight.

Though his Dark Order teammates don’t seem to care for Cabana much, Evil Uno has been a notable exception and is cheering him on here. Should someone tell him this whole thing is undoubtedly just a machination to have Omega and Page square off with higher stakes attached? I’d totally do it. Poor Colt falls victim to a Buckshot, and other members of the Dark Order immediately come out and help Cabana out of the ring. Page now moves on to face Wardlow next week.

A short video package brings us up to speed with the ongoing beef between Sammy Guevara and Matt Hardy. After a commercial break, Taz asks for an answer from Will Hobbs about the generous offer he was made to join Team Taz. He’s also ticked about Tony Khan telling him that Ricky Starks would have received the TNT title shot Darby Allin is getting had he beaten Allin. Starks is perhaps even angrier, and he cuts a good mad promo.

Alas, we know what you were all waiting for: Le Dinner Debonair. Even ordering steak turns into a competition between these two alpha males, with Chris Jericho “winning” by ordering his steak blue. But as Jericho and MJF begin to bond over their common disdain for Orange Cassidy, it suddenly turns into a full on song and dance routine. As in literally, a (lip-synched, but still) duet with a dancing line backing them and the whole nine yards. My simple words can’t do it justice, so I’m planning on dropping the YouTube link in here ASAP.

This is essentially just a squash match for Britt, who taps out KiLynn with the Lockjaw. On to bigger and better things once she gets back into prime ring shape.

Since it’s their belts that the winner of this match will be vying for, it’s only right for FTR to be out with the announcers to call this one. I think we all expect that this is setting up an FTR-Bucks showdown, even though it’s weirder now than ever since both teams are essentially heels at the moment. The pleasant surprise is that even with the inherent messiness in a four-team match, Reynolds and Silver look good, at least until Nick Jackson cuts through every member of all three other teams like a buzzsaw. The Bucks think they’ve won it with their top rope piledriver/senton combination, but their pin is broken up and thus their celebration is premature. Matt Jackson eventually gets the pinfall for his side, and even FTR notes “it’s time.”

The champs head into the ring to offer beers to the Bucks but get them slapped away. A masked man assaults the Bucks from behind with a chair, coming off the turnbuckles with a spike piledriver. If that’s Tully Blanchard, he’s looking pretty spry. Oh man, it is. They stomp Matt Jackson’s leg in a chair, leaving FTR triumphant and the announcers wondering if the title match at Full Gear will even be able to go on as planned. See you in seven!

Did I give this episode an extra half-star because I was simply staring with my jaw dropped during the dinner segment? I’ll never tell, but maybe. The tournament matches were fine, except for the Lucha Bros. intramural contest, which we knew would be awesome. Everything else was perfectly acceptable, and the build-up to Full Gear should continue to range between good and great. I’ll take it.