AEW Dynamite: All titles on the line on anniversary night, but will any change hands? 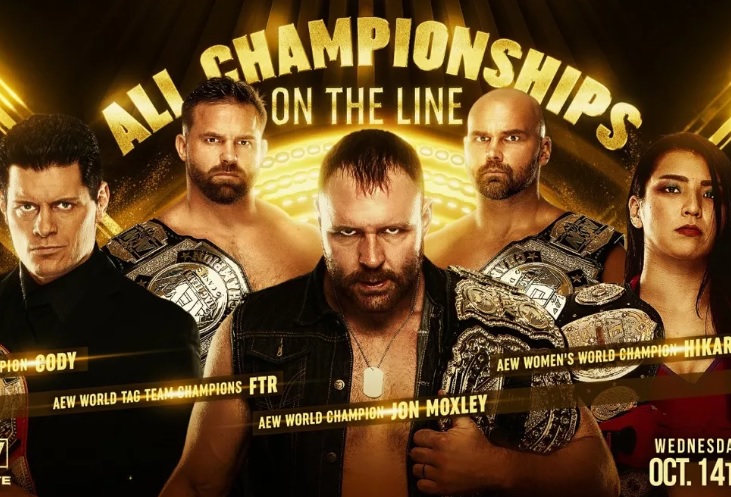 It’s bound to come up during tonight’s show, but AEW picked a hell of a year to make its debut. Other promotions might have wilted during the pandemic, but AEW Dynamite has soldiered on and been pretty good more often than not. That’s no small feat considering the circumstances. The company celebrates one year of programming with a stacked-on-paper card that features all titles on the line, though with Full Gear not far off, it doesn’t seem very likely any of them are in real danger of new folks claiming them. Let’s find out, shall we? Live to TNT we go.

The “backyard comedy wrestlers” finally get their chance, earned by being the No. 1-ranked team for four straight weeks. The announcers talk up Trent and Chuck’s record and their triumph in the parking lot fight with Santana and Ortiz. Wait, are we just glossing over the fact that Orange Cassidy popped out of a trunk to help them win that? Well, are we?!? Just kidding. This bout has the full 60-minute time limit, so it’s more of a full-on serving of greatness as opposed to a mere brush. If you feel like this will be the kind of match where the challengers get their chances but Tully Blanchard makes the difference in the end, you’ve hit it right on the head. Also, if you dislike violence inflicted on classic video game cabinets, you won’t want to watch this. FTR retains their titles like probably everyone will tonight.

Seeking vengeance for the arcade game, perhaps, Miro and Kip Sabian (but mostly Miro) add injury to insult by beating on the Best Friends. They also have a match up next. A squash match, but hey.

Or maybe Johnson is now officially Shotty Lee, I don’t know. He and Maluta are helpless against Miro, who gets a submission win. As it turns out, yep, Sabian and Miro are angry about the video game getting destroyed. Jericho once had a feud started over a spilled cup of coffee, so this isn’t that ridiculous in comparison.

Something is happening backstage, let’s get a camera back there! That something is Lance Archer laying into Jon Moxley, a sneak preview of their upcoming main event.

Pull up a chair, because we’re about to see the latest segment with both MJF and Chris Jericho, which are always fun. Jericho comes to the ring with the entire Inner Circle, all wearing the sweet jackets MJF gave them two weeks ago — except for Sammy Guevara, who refuses to wear his as he got it belatedly and about three sizes too big. The kissing up is in full swing, with MJF buttering up Le Champion for something. Jericho wants to know what that something is, revealing along the way that he hates Animal Planet for some reason. It takes some time and is incredibly hard for him to say out loud, but MJF wants to join the Inner Circle.

It’s Spa Day for Dr. Britt Baker, D.M.D., who gets a treatment of some sort while talking to Tony Schiavone, who is getting his own pampering. Baker reveals the next step in her plan is to be “the baddest bitch on the block” before freaking out when she realizes Schiavone is naked under his towel. She subjects the announcing legend to painful chest waxing and puts the entire women’s division on notice.

Someday, Cassidy is going to reach the natural finish line for the run he’s been on in AEW and win some individual gold. Today is probably not that day, however. Darby Allin is watching from the stands, and he’s a very interested observer since he’s getting a shot at whoever holds this title at Full Gear. The Dark Order also wants to get a close-up view of the proceedings, but it isn’t long before the ref gives them the heave ho for intervening in a physical nature outside the ring, if you smell what I’m cooking. After soaking up tons of punishment in the early going, Cassidy rallies late. But alas, there’s a 20-minute time limit in play, and just as Cassidy appears to have Cody down for three, he runs out of time mid-count. What are the chances? GG in the chat, Orange.

Winner: None, as the match goes to a time limit draw, and Cody remains AEW TNT Champion

With Archer about to get his backstage interview, Moxley is having none of it, attacking him while yelling “we ain’t finished” or words to that effect.

Back at the ring, Schiavone gets a health update from Matt Hardy, who is psyched to be at the one-year anniversary show. Hardy says he is cleared to return to action, but on the big screen, someone is setting fire to pictures of him. It’s Guevara, naturally, who comes clean about attacking Hardy with a classic “it was me all along” quip.

Now it’s time for a tag team draw. Apparently the four teams drawn will compete for a chance to challenge FTR for the titles. And the lucky winners are Private Party, Silver and Reynolds of the Dark Order, The Butcher and The Blade, and the Young Bucks. The Jackson brothers offer FTR a handshake and it quickly turns tense. They’re not here to superkick Schiavone this time, or even FTR. But they do superkick two members of the other teams, starting off a brawl that ends with them staring down Private Party. The Bucks give Private Party fist bumps but then superkick them too. In the words of noted (albeit fictional) philosopher Dark Helmet, “I can’t believe you fell for the oldest trick in the book! … What’s with you man? Come on!”

It’s been really enjoyable seeing Swole in some more technical sequences these last few weeks, growing her beyond being known as strictly an athletic powerhouse. Despite some fear in my mind that maybe Shida would be the one champ to drop their gold on a night full of title matches, she wins and continues her lengthy title reign.

A video package shows Shawn Spears claiming he isn’t stalking Scorpio Sky, but is instead upset about Sky “stealing” a moment from him. Scorpio now owes him a debt of some sort.

Or maybe this could be the match with hijinks. Not only has it been made a no DQ affair, but Eddie Kingston and his “family members” Rey Fenix and Pénta El Zero M are at the announce table. Feels like something could happen here. You want weapons, we get a bunch of them in this one, including chairs, tables, and a trashcan. Moxley connects with the Paradigm Shift twice, but Archer manages to kick out. Archer connects with the Blackout, but Moxley rolls him onto his shoulders and barely escapes with his belt.

After the bell, Kingston yells “go help him.” But surprisingly, Fenix nails Archer with a chair shot, and even though the Murderhawk Monster no-sells it, Jake Roberts tells him to walk away. Kingston gives Mox some props and says he’s proud of him, but it’s all a lengthy setup. After a spinning hammerfist to the already beaten up Moxley, Kingston applies the rear naked choke until he’s out. The Mad King talks about how beautiful the title is and that Moxley stole it from him since he never tapped out. And as this show is really short on time, we’re out of show. See you in seven.

Hard to me too mad at a show full of good to very good title matches, and there was some storyline advancement to boot. Chris Jericho and MJF are magic almost every time they are in the same segment, so it was good to see their dynamic continue to evolve. All told, it was a worthy celebration of a year with plenty of successes.