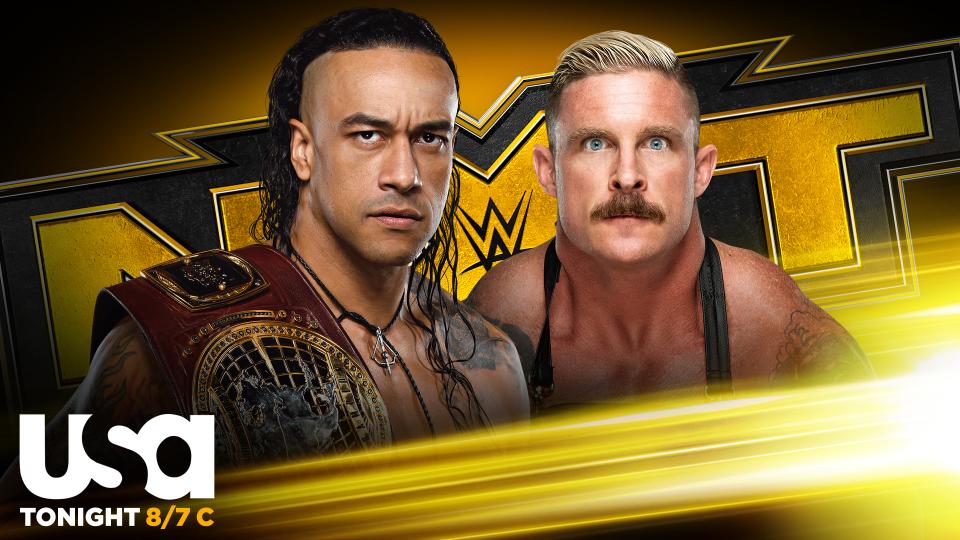 Building up to NXT’s Halloween Havoc on October 28, the yellow brand presented two number-one contendership matches going into tonight’s episode. While both matchups were definitely solid, along with the remainder of this card, the excitement level for NXT is flatlining. The notion’s a little scary preceding NXT’s supposedly special Halloween Havoc, but those are the consequences for producing two important NXT events so close to one another. Residing inside the Capitol Wrestling Center, the yellow brand has heavily relied on its piped-in crowd noise and flashy lighting to create some enthusiasm. But that shouldn’t take away from the obviously talented roster and solid performances as noted below.

The UE’s cornerman Kyle O’Reilly grabs the mic, throwing shade at Ridge Holland for storyline breaking Adam Cole’s ribs. He claims The UE would’ve hospitalized the former if his real-life ankle injury didn’t happen last week. O’Reilly vows that the golden prophecy will be fulfilled once again, and that is undisputed. Burch and Lorcan make their entrance, and the opening minutes feature some commendable tag action — ground-based and fundamental. Burch eventually makes the hot-tag comeback, but Fish makes an apt distraction turning the tides. Lorcan takes out both opponents with a Double Blockbuster, and together they deliver a double-team maneuver before Fish makes the save. This allows Strong to hit the flying knee for the pinfall victory. The UE are officially number-one contenders for Breezango’s titles.

A video package covers Ember Moon’s hiatus and return to wrestling. How can anybody take Moon seriously….

Adonis sports some jorts and sneakers and doesn’t come remotely close to pulling off that look. While the two competitors flip around, the obvious question remains: What happened to Adonis’s beef with Legado Del Fantasma? That question is quickly answered when Raul Mendoza and Joaquin Wilde walk down the ramp. Atlas takes advantage of the distraction and rolls up his opponent for the victory. The faction attempts to attack Adonis before Atlas makes the diving save. Isaiah “Swerve” Scott appears with equalizing chairs, presumably setting up some six-man action. This feud will never end!

Candice LeRae is interviewed backstage regarding her number-one contendership match tonight. Johnny Gargano’s by her side, calling out his opponent Austin Theory for being immature.

An arrogant heel versus an arrogant heel. The thought process behind this one is unclear. Nevertheless, the opening minutes see Gargano continually outsmart and out-wrestle his opponent before Theory hits the always-impressive Rolling Dropkick. Before commercial, Gargano hits a Slingshot Spear. He attempts a running maneuver, running into Theory’s Flapjack and Suplex, turning the tide. Theory hits two Superkicks and rolls up Gargano for an actually surprising kickout. It’s so obvious throughout this match that Gargano’s a natural babyface and should absolutely be one. He Lawndarts Theory and delivers the One Final Beat for the pinfall victory.

Raquel Gonzalez delivers the most believable women’s promo in weeks before rival Rhea Ripley interrupts. Officials attempt to separate them before break.

Blackheart breaks out an outside dive moments into this bout, displaying the unkempt hyperness of this division. They trade maneuvers throughout the opening minutes until LeRae takes control and faceplants her opponent onto the apron before break. Another nitpick, but the piped-in crowd chanting in the CWC is so jarring, especially in this match. Blackheart attempts the top-rope Senton, but LeRae gets her knees up. She delivers a German, Blackheart returns the favor, and Lerae hits a Moonsault for two. Blackheart cinches an innovative submission, attempts the Senton, but LeRae retreat outside. From the outside, Indi Hartwell hands LeRae a foreign object which the former uses to gain the pinfall victory. LeRae faces Io Shirai at Halloween Havoc for the NXT Women’s Championship

Oddball couple Drake Maverick and Killian Dain are backstage. The former excitedly displays some potential merchandise, but the Irishman doesn’t share the same energy. Dain angrily storms off before break.

Robert Stone and Aliyah are in the ring, and the former cuts a solid promo promoting the Robert Stone Brand. Aliyah gains the opening advantage before Storm makes the comeback. She delivers a German, corner hip-attack, and Storm Zero finisher for the victory. With the rockstar entrance music and flashing lights, NXT is really placing their bets on Storm to become something big.

General Manager William Regal is interviewed about Indi Hartwell’s interference and the Gonzalez-Ripley feud. The NXT Women’s Championship match will continue as planned, and Raquel Gonzalez and Rhea Ripley will battle at Halloween Havoc. Xia Li interrupts with Boa trailing behind her. She begs for an opportunity next week, and Regal reiterates that “(He) will take it into consideration.” He’s a busy man, you know.

Dain demands that the upbeat, hand-picked theme song by Maverick gets shut off. The latter comically says, “We didn’t even get the whistle!” referring to the meat of the tune. Dain isn’t cooperating with his clearly driven partner — can’t imagine why. Maverick eventually makes the hot tag, but Imperium takes down Dain. He reluctantly makes the hot tag back, and Maverick runs wild on Imperium. But Marcel Barthel runs Dain into the steps, and Fabian Aichner delivers a Suplex to Maverick. They hit their tag-team finisher for the pinfall victory. Ever-Rise, Chase Parker and Matt Martel, attempt to beat down Maverick before Dain makes the save: “Nobody hits you but me!”

An NXT Tag Team Championship matchup is set for next week: Breezango vs The UE.

The two competitors lock up, both displaying their surprisingly athletic abilities in the opening minutes. Priest hits the Falcon Arrow before commercial. Lumis connects with a Spinebuster, attempts his finishing submission, but Priest delivers the Tornado Kick and Flatliner. The champion torques the previously injured ankle, but Lumis escapes and hits a Backdrop. He kips up and drops an impressive leg drop for two. Lumis misses the top-rope Swanton, Priest delivers a closeline and once again escapes his opponent’s finishing submission. They battle on the outside before Cameron Grimes double-stomps Lumis on the apron while the referee is distracted, allowing Priest to retain.

Priest halts Grimes’ attempt to cause any further damage, but Johnny Gargano attacks the champion from behind with a chair. The night isn’t finished with, as General Manager William Regal appears on-stage. He announces alongside postergirl Shotzi Blackheart that the upcoming Halloween Havoc matches will be contested under a stipulation wheel, deciding the fate of October 28’s lineup.

Unfortunately a step down from last week, this episode of NXT had no fire fueling it. Even last week featured a handful of squash matches, but it was acceptable coming off of TakeOver. However, the Spin the Wheel idea seems pretty cool.