NJPW G1 Climax Nights 15 and 16: Competitors jockey for position as the finale nears 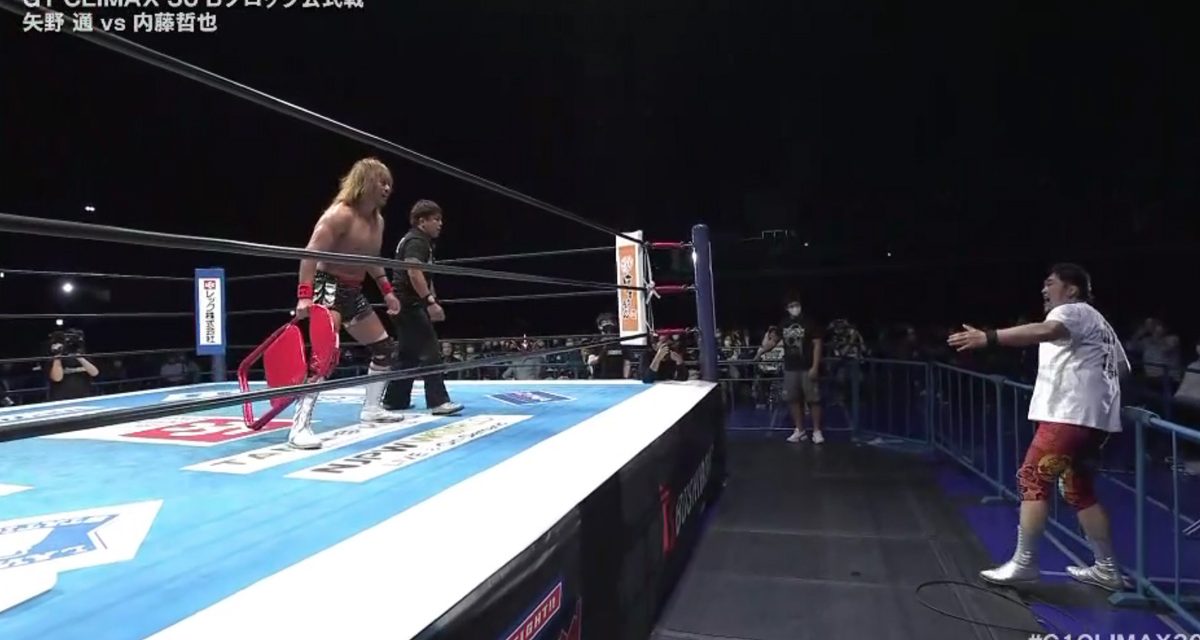 With the conclusion coming up this weekend the final phase of the G4 Climax tournament is taking shape.

In B Block action today it was rivals Evil and Naito who ended the day tied for first place. Evil has only lost to Zach Sabre Jr. and Toru Yano. Naito has only lost to Sanada and Evil. The IWGP Heavyweight and IWGP Intercontinental Champion pulled off a win against the slippery Yano on night sixteen…with a little help from a Young Lion.

Yano pitched a fit before the match even started complaining that Naito was taking too long to remove his gear. Naito asked him to calm down.

Both men refused to lock-up frustrating each other. Naito and Yano both raced for a turnbuckle pad. Yano untied one quicker and smashed it over Naito’s back. 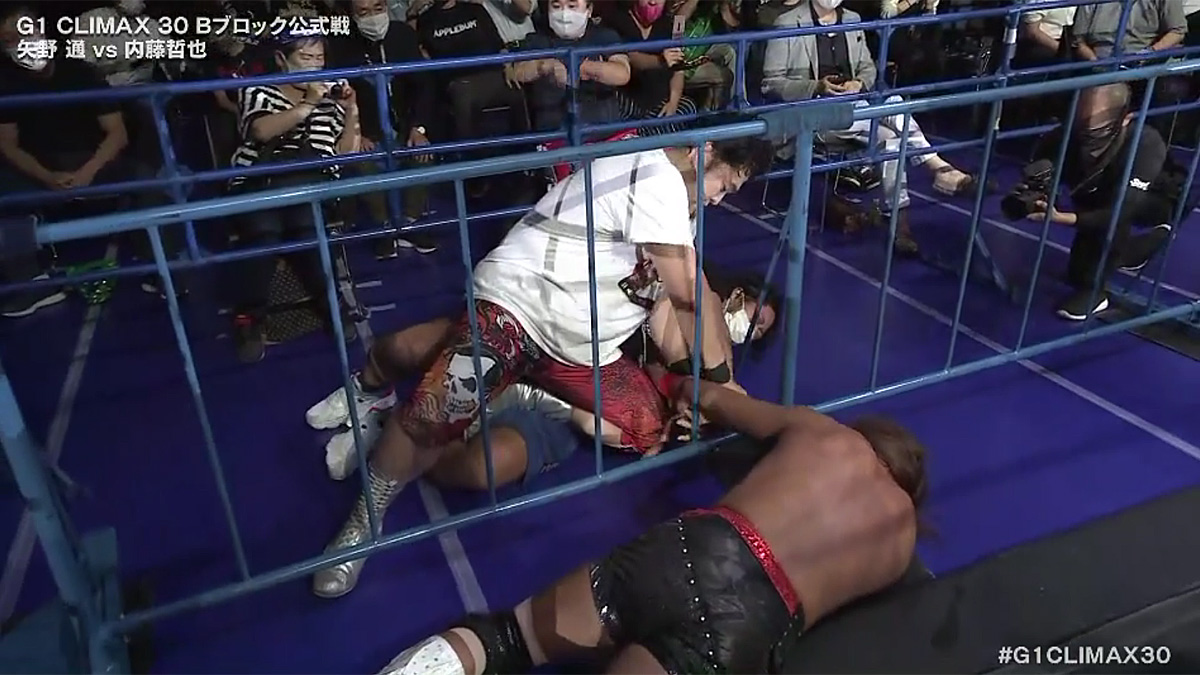 Naito and Tsuji teamed up double clotheslining Yano to the mat. Tsuji finally freed himself from the tape and Naito. To thank Tsuji for his help Naito put his hand up for a Los Ingobernables de Japon fist bump. As Tsuji reached up Naito kicked him in the stomach, picked him up and slammed him on top of Yano. Naito tried to slam the official on Yano as well but Yano punched him in the “lower abdomen” from behind. Naito collided with the official knocking him down. Naito kicked Yano in the “nards” rolling him up for the three count.

Yujiro Takahashi is the only G1 participant without a single win. Yoshi-Hashi has just one.

Yota Tsuji is another Young Lion who should be moved up to the main roster soon. A spear, a giant swing and a Boston Crab spells doom for Uemura.

Yoshi submits to the Yes Lock. Was there any doubt?

Evil kicks out of a GTR to pin Goto with Everything is Evil.

Sanada survives the Cloverleaf to pin The Ace with two moonsaults from the top rope.

Uemura wins another match with his straight-jacket like suplex.

Classic strength versus agility. Cobb flings Ospreay around like a toy. A great sequence has Cobb throwing Ospreay off, Ospreay bouncing off the ground, off the ropes for an OsCutter on Cobb. Cobb scrapes by with a Tour of the Islands.

Yujiro continues his losing eight match losing streak. A jumping knee to the face and Kamigoye pins him.

A brutal super kick and a Black Mephisto puts Takagi away. 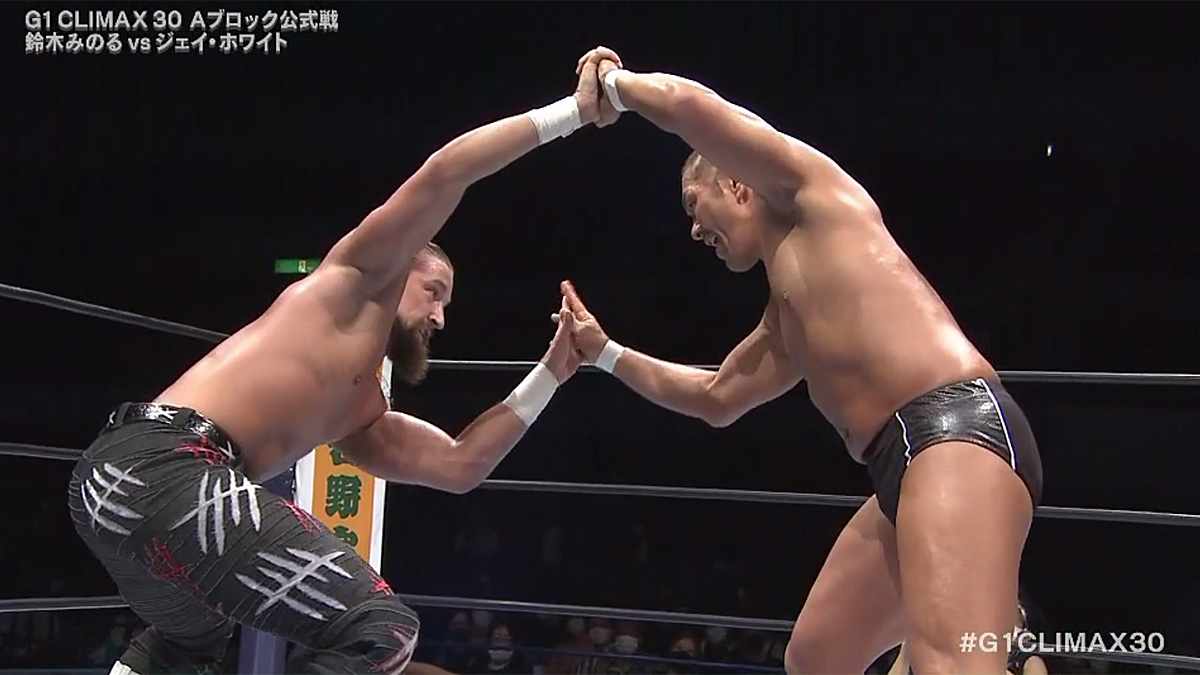 White employs his duck and run strategy which just pisses Suzuki off. White warns Suzuki. “I will wrestle you but no kicks like that,” he demands. The crowd actually cheers for Suzuki to beat the tar out of White. That is how much they just hate White. Suzuki has White in an arm lock but Red Shoes is distracted by Gedo. White taps and Red Shoes doesn’t see it. Suzuki moves Red Shoes out of the way and punches Gedo in the jaw. Suzuki stops a Blade Runner attempt by pulling White’s hair out. Gedo pulls Red Shoes out of the ring. You know the deal by now: Low-blow, Blade Runner, 1-2-3.

Okada can barely stand, however, he still has enough left to put Ishii to sleep with the Cobra Clutch.