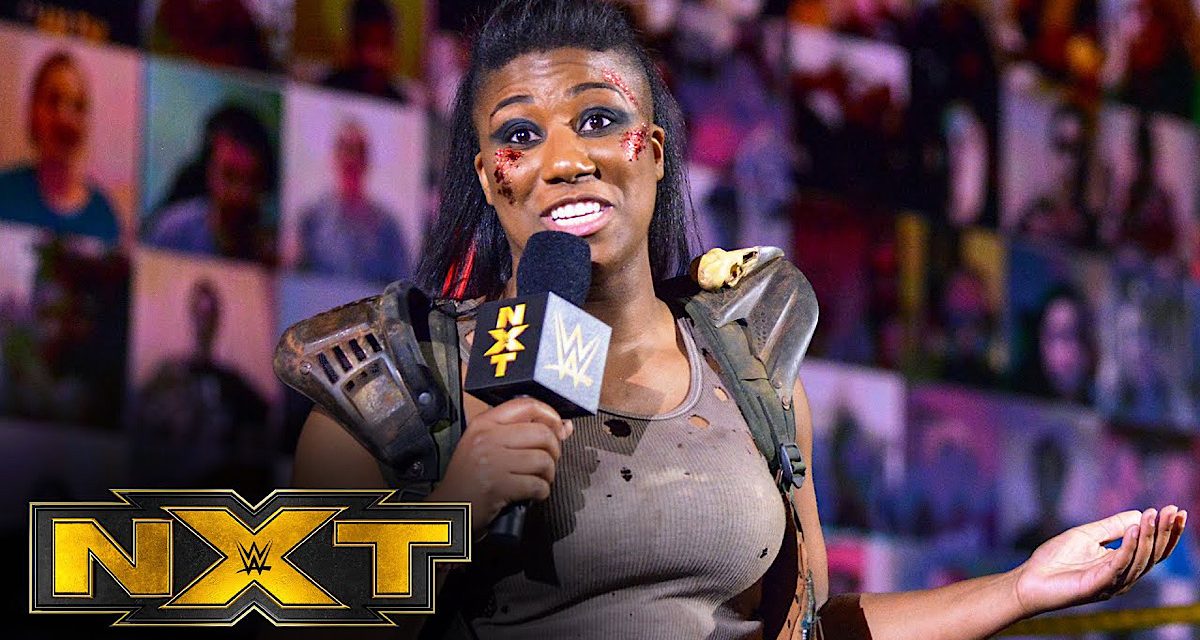 Following the outstanding NXT TakeOver 31 event from this past Sunday, tonight’s episode served as an easy-watch cooldown show for the yellow brand. The next chapters in the Ember Moon return, Ridge Holland attack, Kushida-Dream rivalry and many more were played out, heading into NXT Halloween Havoc later this month. Both headlining performers from Sunday, NXT Champion Finn Balor and Kyle O’Reilly, were injured in-ring, allowing NXT to showcase some lesser highlighted members of the roster like Austin Theory. And the amount of underutilized, talented wrestlers on this roster is mindblowing.

This was also the first NXT weekly show to be held inside the brand-new Capitol Wrestling Center, the decked out Performance Center. While not everyone’s cup of tea, the rejuvenated atmosphere makes NXT seem much more grander than before. Plus, these high-quality lights make the NXT guys look even cooler.

The competitors roll through some chain-wrestling sequences before Kushida starts targeting the left arm. Ciampa counters his opponent’s rebound maneuver to gain control for multiple minutes before the Japanese comes back preceding commercial. Kushida begins attacking the arm, but Ciampa powers up with a Powerbomb, and the competitors trade blows. Kushida applies the Hoverboard Lock on Ciampa until rival Velveteen Dream inadvertently Axehandles the latter, ending this match in disqualification. The Japanese sends the Velveteen Dream running, and despite the non-finish, this was NXT’s best opening bout in weeks.

The returning Ember Moon appears inside the ring, mic in hand, with green lights surrounding the arena. She attempts to sound hard and intimidating, but those qualities never come across. Thankfully, NXT Women’s Champion Io Shirai and Rhea Ripley make double interruptions. The latter starts talking before Dakota Kai and Raquel Gonzalez cheap shot her from behind igniting a brawl. General Manager William Regal takes hold of this mess and announces a main-event tag team match for later tonight. Holla holla!

Drake Maverick is interviewed about his newly formed tag team with Killian Dain. The two comically banter as they start their careers as NXT’s new oddball couple.

Io Shirai quickly answers a question regarding tonight’s main event. She says the other women aren’t her problem, only defending her championship is.

After being taken out by Ridge Holland this past Sunday, The Undisputed ERA talk smack towards the attacker backstage.

Maverick and Dain come out to the former’s hand-picked theme song — an upbeat whistling tune. Maverick is elated, Dain not so much. This angle’s a friendly reminder that Maverick shines brightest in midcard comedy roles — he does it pretty well. Chase Parker and Matt Martel try to mount some offense; Dain’s disunity really helps their effort. But Martel foolishly screams at Dain, “You’re nothing but a fat bozo!” which prompts the Irishman to tag in and wreck house. Maverick makes the blind tag, argues with his partner, and gets Powerbombed by Dain onto Parker earning them the victory. Once again, Dain takes out Maverick but tonight decides to carry him out. Nothing wrong with comedy relief, but the angle’s so jarring compared to normal NXT programming.

Johnny Gargano and Candice LeRae take a walk outside their clearly affluent neighborhood while complaining about their losses on Sunday. They walk into their house and find a brand-new TV sent by Indi Hartwell. Afterall, Gargano does need a new one.

Two former, upstart EVOLVE Champions squaring off inside an NXT ring is gratifying. They’re also both alumni trainees of WWA4 in Atlanta, training under AR Fox. Ruff almost upsets his opponent with a Hurricanrana rollup and even gets some solid offense in. He slips on the ropes allowing Theory to capitalize with his finisher. Great showing for Ruff on his first official day as WWE signee.

Theory takes the mic, calling out Adam Cole and laughing at his broken ribs. For those in the back, “Austin Theory is the future of NXT!” He’s got an exceptional look, can wrestle, and can apparently cut a good promo too.

The returning Dexter Lumis accepts Theory’s challenge (Ruff was only a warmup). Theory’s back to his over-the-top bumping as Lumis delivers a Thesz Press and Bulldog. The latter stares intensely into the ringside camera before commercial. Theory hilariously crawls around the ring mocking his opponent and keeps the pressure going. Commentary keeps reiterating the “immaturity” shown by Theory and even connects it to young Randy Orton. There’s absolutely no doubt that Theory has the potential to reach Orton’s status and success in the distant future. Lumis eventually catches his opponent with a Spinebuster and makes his comeback, even hitting a Monkey Flip. But Theory returns with the always impressive Rolling Dropkick… that Lumis basically no-sells. Thanks a lot, Lumis! He cinches a triangle arm-choke and knocks out his opponent for the victory.

Before Lumis can celebrate, although he seemed pretty modest about it, Cameron Grimes Double Stomps him. This was payback for not answering Grimes’s question last week. Grimes is going “to the moon!”

Dakota Kai and Raquel Gonzalez say that they’ll take out Rhea Ripley tonight. The former tells Ember Moon to get behind the line.

A special edition of ‘Prime Target’ highlights the incredible Takeover main event between Kyle O’Reilly and Finn Balor. Both men suffered injuries that will keep them out of action for some time.

North American Champion Damian Priest comments on his Takeover win, and issues an open invitation for any challengers willing to get The Reckoning.

Commentator Wade Barrett gives a geography lesson amidst this battle between Brits. Burch surprisingly gets some fiery offense in, suplexing Holland across the ring. He attempts a Crossface, but Hollands powers out, slamming his opponent with his finisher for the victory. After the match. Burch turns Holland around and slaps him up the head. Holland returns with a headbutt and continues the assault in the corner. Burch’s partner Oney Lorcan makes the save until he plays the next victim to Holland. Multiple referees have to separate the action, but Lorcan dives onto him, twice.

Johnny Gargano is enjoying his new TV with a USB video sent by Indi Hartwell. He points out the amount of times Hartwell saved LeRae in the women’s battle royal weeks ago.

Timothy Thatcher holds another Thatch As Thatch Can session, assaulting another poor trainee. Thatcher is grimey, bold, and intimidating. Him being lost in the shuffle is a testament to NXT’s stacked roster.

Possibly a legitimate injury, Holland is stretched out with an injured knee. NXT is airing live, so presumably Holland was being tended to throughout the entire commercial break. Awful timing considering he’s just received a main-event level push.

Being the postergirl for NXT Halloween Havoc, Blackheart enters with a Halloween-themed tank. She immediately runs through her opponent before Li takes control. Can anybody tell if Li’s a heel or face? Because there’s no attempt at distinguishing it. Blackheart finally hits the top-rope senton for the victory.

Fellow Chinese wrestler Boa gives Li an envelope and escorts her to the back. This could actually be an interesting development.

Moon debuts a brand-new entrance theme that actually isn’t too bad. She has full control over Kai before the latter retreats to Gonzalez. Moon and Ripley work together to keep down Kai before commercial. Gonzalez contorts Ripley throughout the break and continues to cut the ring in half. Finally, Ripley gets past Kai and makes the hot tag to Moon, but Gonzalez and Kai reverse the momentum and deliver a double team for two. Commentator Wade Barrett pops over Kai’s Kairopractor maneuver — and rightfully so — before Moon gets an assisted DDT with Ripley to Gonzalez. Moon powerbombs Kai, Ripley sends Gonzalez over the announce table, and Moon hits the still eye-catching Eclipse for the victory.

Really good follow up to NXT Takeover 31. There were some good matches spread throughout, and some hot angles too. Even the multiple squash matches didn’t hurt because of how well-done they were.