NXT Takeover 31: Every champion retains inside the Capitol Wrestling Center 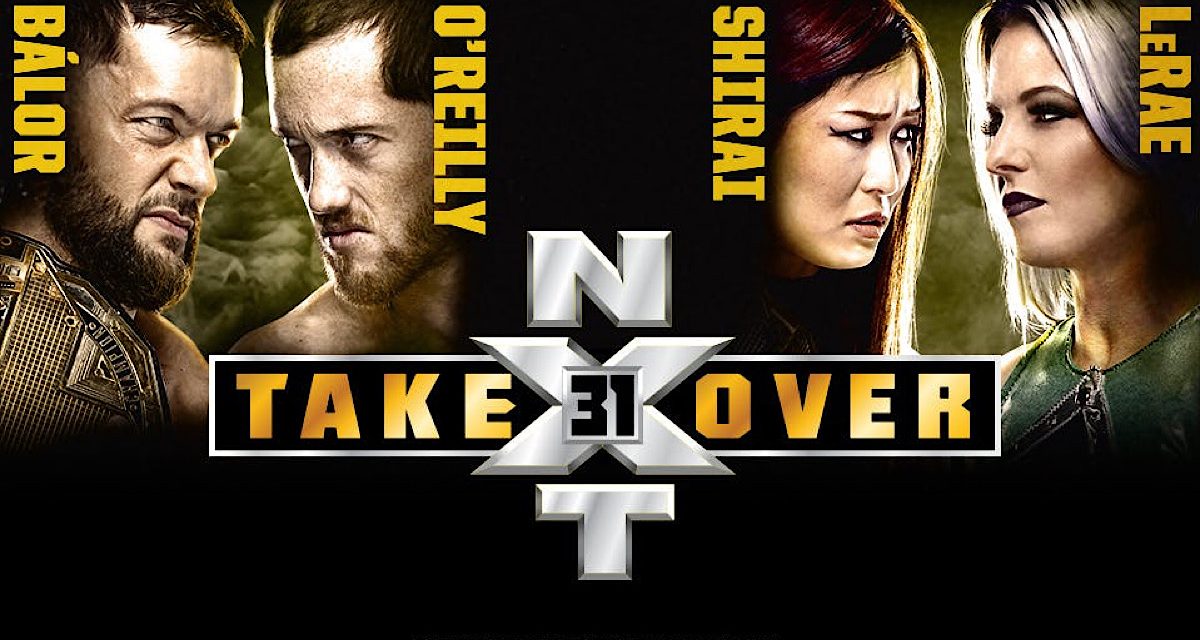 Following arguably the weakest build to an NXT Takeover event yet, the yellow brand overcame any previous doubts by having a top-to-bottom great show. The matches throughout this card were definitely up to Takeover standards, headlined by NXT Champion Finn Balor and challenger Kyle O’Reilly. The highly rumored Undisputed ERA split didn’t come into fruition tonight, putting all the spotlight on solid wrestling and the debut of the NXT version of WWE Thunderdome: the reinvigorated and remodelled WWE Performance Center, the brand-new Capitol Wrestling Center.

Earlier today on numerous WWE social platforms, NXT commentator Vic Joseph introduced the yellow brand’s newest residency: “In 1953, Jess McMahon and Vince McMahon Sr. formed the Capitol Wrestling Corporation which revolutionized the industry, and also set the foundation for the WWE. We here at NXT are always looking to the past to inspire our future. So it’s with great honor that I welcome you… to the new home of NXT, the Capitol Wrestling Center.” Decked out in LED lighting, flashy strobes, and even some physical attendees, the high-quality CWC gave NXT the refresher that it’s badly needed. The former plexiglass barricade was replaced by chain-link fencing, reminding everyone that the same underground, edgy wrestling the promotion has prioritized for years continued to deliver through NXT Takeover: 31.

The champion’s dramatic entrance looks phenomenal inside the CWC, and the rejuvenated arena gives this some big-fight feel. Priest dominates the opening minutes until the challenger whips him onto the floor. Gargano delivers a Suicide Dive and rope-hung senton to gain the advantage. He targets Priest’s left leg, but the champion overcomes with a Flatliner, big splash, and Falcon Arrow for two. Gargano almost gets the surprising victory with an out-of-nowhere Sunset Flip before they trade their strikes. Then, Priest takes Gargano off his feet with a Tornado Kick, followed by a Razor’s Edge straight onto the apron for two. After some quick sequences and heart-stopping near falls, Gargano retreats outside.

The 6’7” Priest dives over the corner turnbuckles and onto some ill-fated security plants, allowing Gargano to low-blow the champion for another two-count. Gargano cinches the Gargano Escape until Priest reaches the bottom rope. The challenger attempts the One Final Beat but instead gets caught with Priest’s brutal-looking finisher, The Reckoning, for the pinfall victory. What an incredible opener! The matchup undoubtedly did justice to Takeover’s signature, exciting curtain jerkers.

The former is drowned in purple entrance lighting before Kushida attacks from behind. The Japanese initiates the brawl in street clothes while the Dream sports his very-best Doc Brown cosplay, mocking his opponent’s Back to the Future gimmick. Kushida targets the left arm and pretzels his opponent before Dream takes control with an outside Axehandle. These guys aren’t holding back their strikes, juxtaposed against Dream’s Bronco Buster and Hogan-esque antics. The hard-hitting blows continue to withhold mercy before Kushida attacks the left arm again. Dream’s able to capitalize with a Superkick, attempts the Purple Rainmaker, but falls into an armbar. He hits an illegal eye-poke, Powerbomb, Dream Valley Driver, and Purple Rainmaker — but fails to make the immediate cover. He delivers a lethal closeline before Kushida performs the top-rope Hoverboard Lock to earn the tapout victory. The winner commits a post-match attack on the injured arm leaving Dream sobbing in the ring.

The competitors roll though some impressive lucha-libre one-upmanship, and Scott takes control with a Corkscrew Moonsault and Fosbury Flop. After some ground-game by Scott, the champion switches momentum with a bullet-like dive into the outside barricade. Scott kicks out at one, exposing the CWC’s awful crowd plugging as the virtual audience clearly counts “Two!” Escobar talks down the challenger which fires Scott up, followed by a closeline and diving Uppercut. Scott delivers a barrage of maneuvers for a two-count before Joaquin Wilde and Raul Mendoza of Legado Del Fantasma provide a distraction. Scott overcomes the numbers by delivering a crazy Hurricanrana onto the outside — too bad Wilde and Mendoza caught their leader.

But out comes Ashonte “Thee” Adonis to level the playing field; Adonis and Scott will make a great pairing. The champion hits a Superkick and the Phantom Driver finisher, but Scott kicks out, making him the first-ever survivor. Escobar pays homage to Eddie Guerrero with the Three Amigos, but misses the Frog Splash allowing Scott to hit the House Call and 450 for a two-count; this should’ve ended it! They have an awkward struggle on the apron which ends with Scott hitting his head on the turnbuckle steel. Escobar delivers a new finisher to retain his title. It feels like this never-ending feud just isn’t over yet.

Throwing back to the original CWC days, the ring announcer uses a ceiling-lowered microphone for the championship introductions. They commence in quick back-and-forth action ending with Shirai’s advantage with an outside Moonsault. LeRae takes control with a lariat and slows the pace down. She works down the champion until the latter regroups with a double stomp. Shirai makes her comeback, hits the Tiger Feint Kick and Missile Dropkick for a two-count. She eventually hits a backbreaker and attempts her finisher before LeRae catches a Powerbomb; the champion no-sells that maneuver and connects with a Meteora, great. They trade strikes and Crossfaces until Shirai reaches the ropes, and LeRae mistakenly hits the official. The former attempts the Moonsault, and the referee once again gets taken out allowing LeRae to deliver her finisher.

Out comes Johnny Gargano in a referee’s shirt, but Shirai kicks out of the fast count. He tries to hand LeRae the weaponized belt, but the actual ref wakes up. They scream “No, you get outta here” to each other while LeRae takes out her opponent with the belt; Super Shirai kicks out again. The champion hits the Spanish Fly and Moonsault to retain. On the LED board opposing the hard cam, Toni Storm calls out the champion and announces that she’s returning to the NXT women’s division. The challengers continue to make themselves known as NXT”s October 4th Warning appears onstage. She takes off her motorcycle helmet revealing herself to be Ember Moon. Which of these two returns was flatter?

Ashonte “Thee” Adonis is interviewed backstage regarding his involvement in the previous  Cruiserweight Title match. For someone who hasn’t been given much screen time, his promo wasn’t bad!

The Undisputed ERA give their wishes to Kyle O’Reilly before his entrance. Adam Cole embraces him the longest.

Heavy anticipation looms over this matchup as the two competitors lock up. The challenger takes control, targeting the left arm, and Balor returns the favor. Balor beats down O’Reilly with chops and really shows his main-event prowess; he’s very much into his element. Eventually, the challenger makes a comeback with flurrying strikes and suplexes before Balor delivers a tough spinning kick. The champion continues the attack on the midsection, but the valiant O’Reilly fights through the liver pain. They trade maneuvers and reversals as O’Reilly bleeds from the mouth trying to survive Balor’s vicious stomps. The champion connects with the Pele Kick, and O’Reilly returns with the rebounding closeline, knocking down both men. O’Reilly cinches a Guillotine, delivers a Brainbuster, and applies an armbar before Balor espaces and delivers the 1916 for two. The challenger continues to attack Balor’s injured leg and cinches another submission that the latter beautifully sells before reaching the ropes. They trade desperate maneuvers, both with bloody mouths, until Balor climbs the turnbuckles and connects with the Coup De Grace for the clean pinfall victory!

Balor helps O’Reilly up, and the two beaten competitors shake hands. Before the lower third signals the end, Ridge Holland appears carrying a lifeless Adam Cole. NXT Takeover: 31 officially closes with The Undisputed ERA caring for Cole ringside. The eventual split will be saved for later, but Holland makes his mark.

You can never count out NXT Takeover. Along with the new CWC, this event felt way more important than it was originally presented as during the preceding weeks. Great matches of course, and besides the weird ending with Holland, great storytelling.