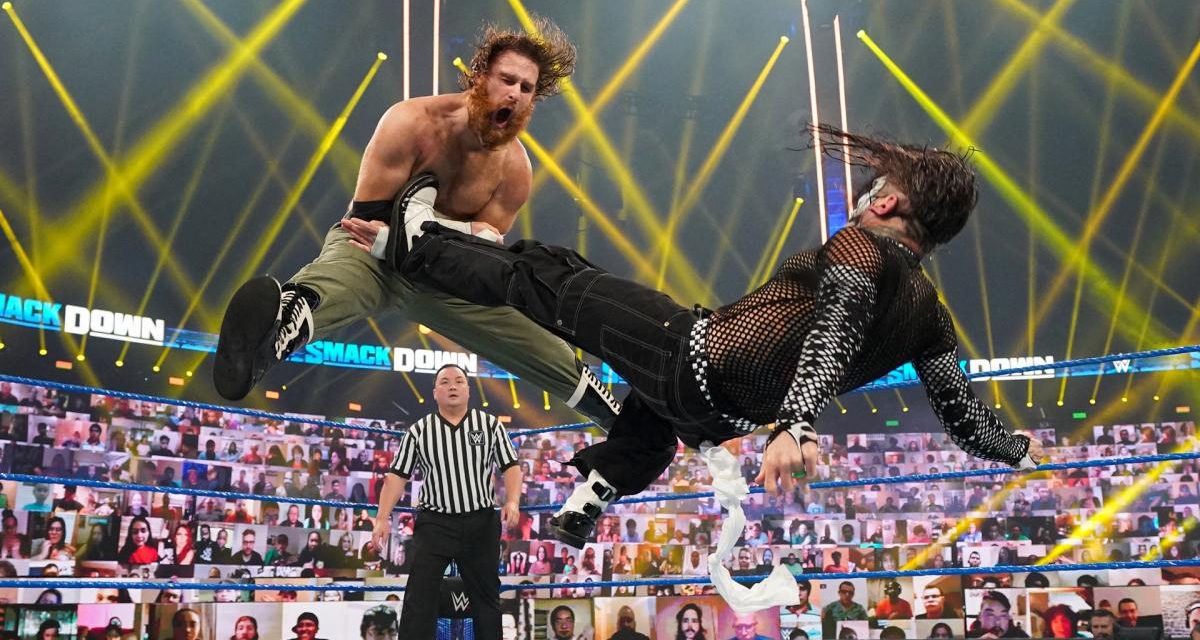 Featuring a special edition of the K.O Show, and an Intercontinental Championship match, this October 2nd edition of SmackDown features the aftermath from Clash of Champions.

We start off the show with a re-cap of the Universal Championship match at Clash of Champions. Roman Reigns comes out after, as I guess he kicks off the show every time now. Paul Heyman says we are here tonight to crown Roman Reigns as the Tribal Chief of the entire WWE. Roman doesn’t want to be acknowledged as the Tribal Chief by Heyman, because Jey Uso never acknowledged him on Sunday. He calls Jey out, and the two stand face to face in the ring.

Jey says that, on Sunday, Roman beat his ass but didn’t break his spirit. He says if Jimmy didn’t throw in the towel he would’ve won. Roman says he didn’t intend to beat Jey so badly, he just wanted to put him in the main event so he could support his family. Roman offers Jey another shot at the Universal Title at Hell in a Cell, a match that he says has the highest stakes in WWE history, and Jey accepts.

AJ Styles comes out and asks if he missed the luau. Styles says that he doesn’t want to see Jey get beat again and that he should give the title shot to someone more qualified, aka Styles. Jey decides enough is enough and attacks Styles.

AJ starts out strong, punishing Jey with a kick and some chops. Jey fights back with a slam and a headbutt. He goes for a hip attack, but AJ sidesteps and delivers a knee drop for 2. AJ delivers a decapitator, and looks for more, but Jey hits a jawbreaker. Styles delivers a flurry of strikes and looks for the Styles Clash, but Jey gets out of it. Jey clotheslines him out of the ring and then looks for a suicide dive, but AJ catches him with a kick. AJ pulls him off the apron and suplexes him on to the announce table as we go to commercial.

When we come back, AJ is in control with a backbreaker that gets a 2 count. The Phenomenal One stomps Jey down and then locks in a submission. Jey fights his way out of it and delivers a superkick, an uppercut, and a Samoan Drop. He delivers a suplex into a neckbreaker for 2, and looks for a superkick, but AJ ducks and delivers a Pelé kick. He then delivers an ushigoroshi for 2. 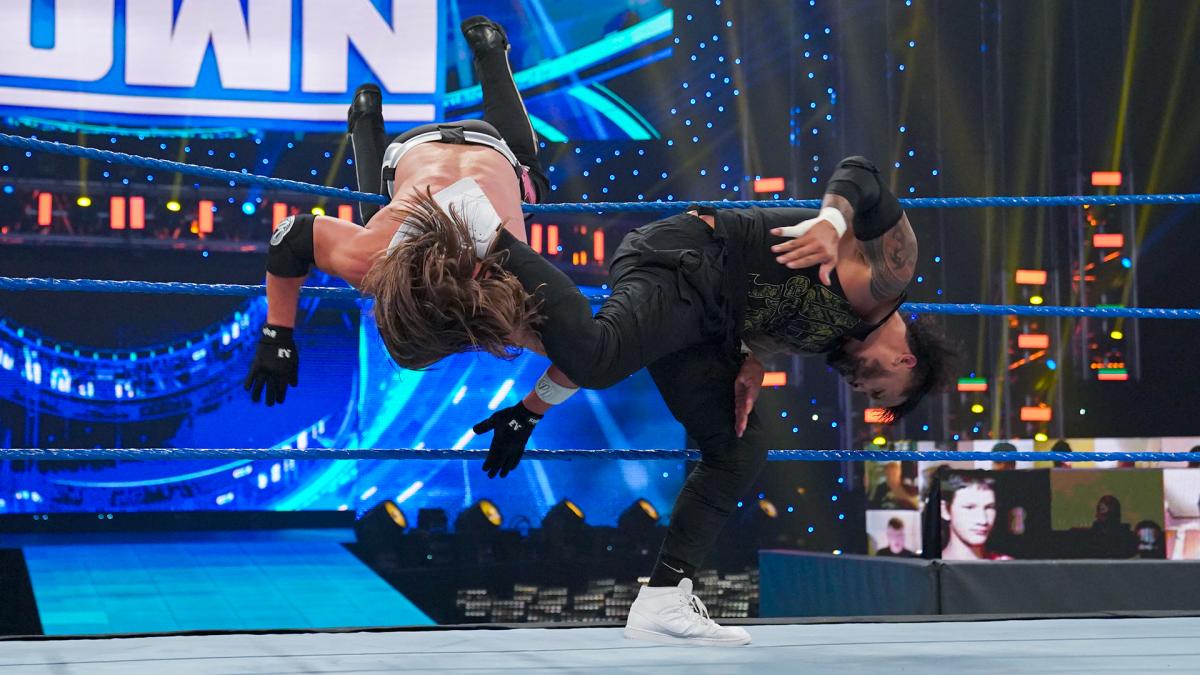 Morrison plays mind games early, using his speed to avoid the bigger man. Otis catches up with a big punch, a back elbow, and a big slam. He tosses Morrison with a suplex, and then hits an avalanche in the corner. Otis completes what was surprisingly a squash match with the Caterpillar and the Vader Bomb.

It was a ridiculously short match and I honestly don’t know why it even happened. 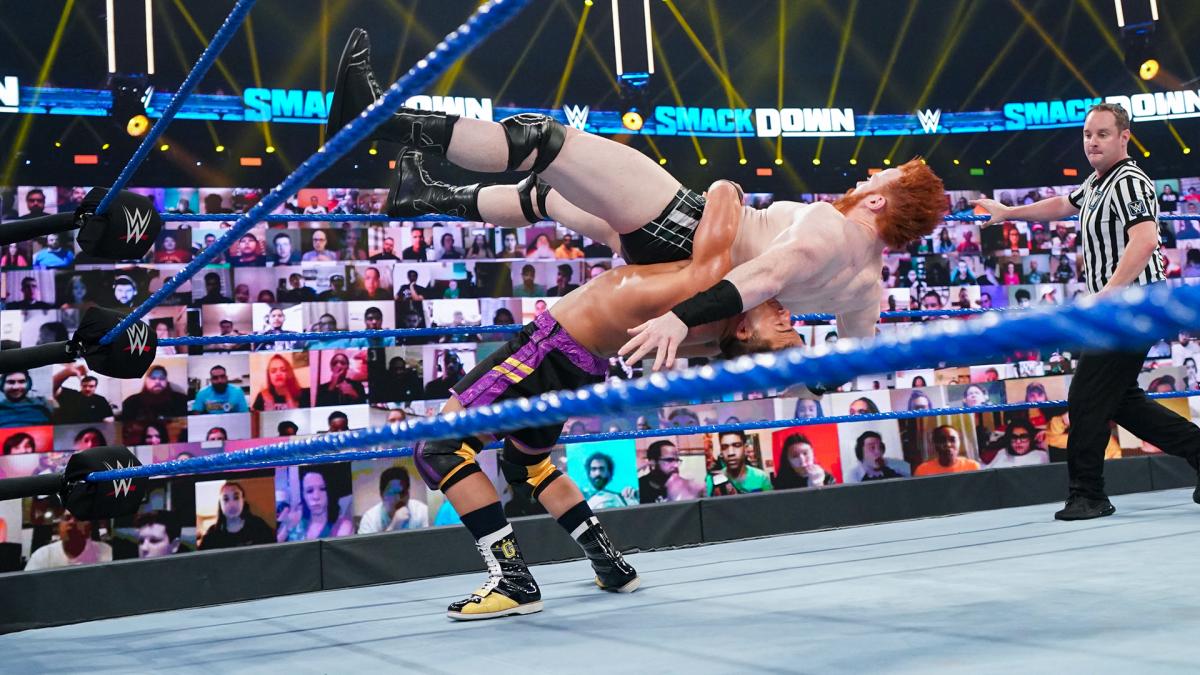 And now, for your viewing pleasure, the one offensive maneuver successfully executed by Shorty G in this travesty of a match. Photo: WWE

Two squash matches that meant absolutely nothing back-to-back: this is what I call quality content.

From Monday Night Raw, it’s Kevin Owens with the K.O Show, with special guest Alexa Bliss! Alexa Bliss dodges Kevin’s questions about her recent change in attitude. She describes what it’s like to be in The Fiend’s presence. She says she has been changed by The Fiend. She tells Kevin to “Let Him In,” and The Fiend appears and puts the Mandible Claw on Kevin. He reaches out to Bliss, and she takes his hand. The Fiend’s close up “Let Me In” thing plays and we go to commercial. 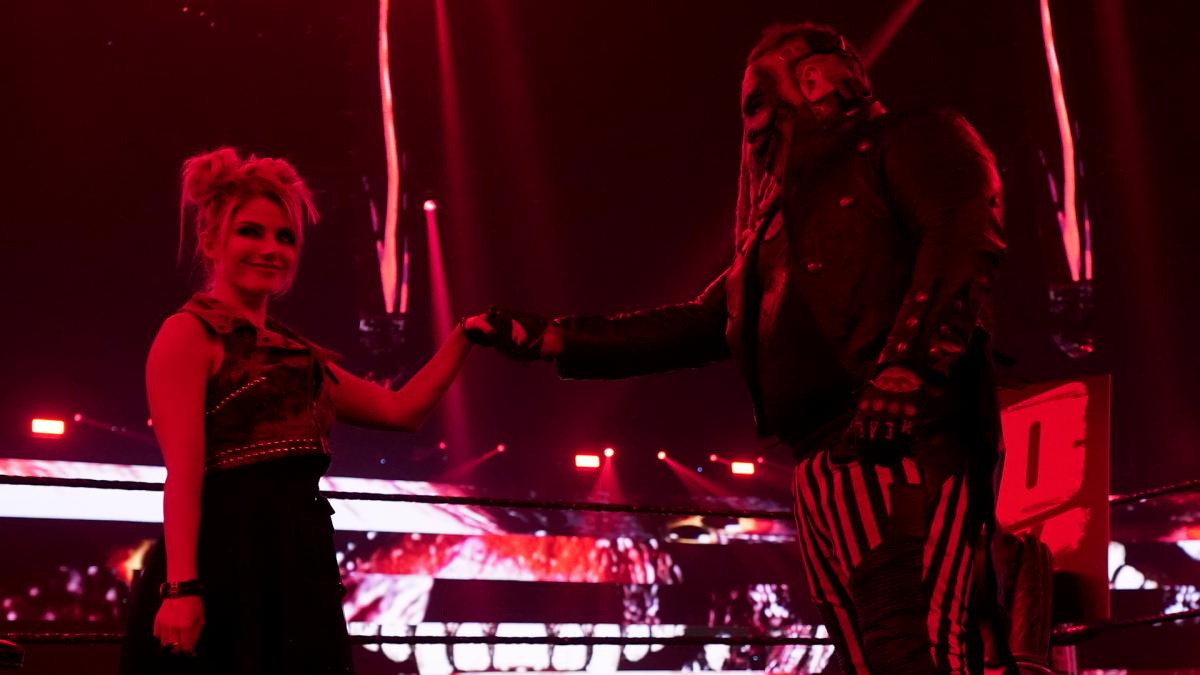 I don’t know what’s happening here, but I like it! Photo: WWE

Nakamura starts off against Dorado, and the King of Strong Style comes out of the gate with deadly knees. Dorado fights back with a hurricanrana and a dropkick. Kalisto comes out, mad that his Lucha Bros (Sorry, Freudian Slip) forgot him in the back as we go to commercial.

When we come back, King Corbin is beating down Gran Metalik. He tags in Cesaro, who deadlifts Metalik into a beautiful stalling suplex for 2. He tags in Nakamura, who locks in a front facelock. He takes a cheap shot at Dorado and looks for the reverse exploder on Metalik, but he lands on his feet and delivers a creative Tornado DDT. Metalik tags in Riddle and Nakamura tags in Corbin, and Riddle kicks him right in the head and then delivers a Bro-Ton and a PK, but the pin is broken up by Nakamura.

Dorado takes out Nakamura with a stunner, and Riddle looks for an attack in the corner on Corbin, but Corbin tags in Cesaro. Cesaro delivers a solid uppercut, but the pin is broken up by Dorado, who then sends Corbin to the outside. Metalik takes out Nakamura with a Swanton, and Cesaro looks for a suplex on Dorado, but he lands on his feet. The Golden Lynx looks to shove Cesaro into Kalisto’s enziguri, but Cesaro shoves Dorado into it instead. Riddle nails Cesaro with the Final Flash and then the Bro-Derek for the win.

After the match, Dorado gets mad at Kalisto for kicking him, understandably, and the two shove each other around. Are they gonna do anything with this or are they gonna just make us feel sad about these guys being mad at each other forever?

The mystery woman is revealed as Carmella, who says she’s “no longer your princess,” and that she’s done dancing around. She should join Peyton Royce’s support group for Recently Ruined Wrestlers.

Sasha Banks, rocking the neck brace, addresses the WWE Universe. She calls Bayley a coward, telling her to come next week to fight her for the SmackDown Women’s Championship. She rips off her neck brace, telling Bayley that she doesn’t have a chance.

Sami comes hot out of the gate, beating Hardy down in the corner. Hardy fights back with some right hands and a shoulder block. Sami goes for a leapfrog, but Hardy catches him with a dropkick to his injured ribs. Hardy spears Sami in the corner, focusing on the ribs. Sami gets back in it with a kick and some elbows. He looks to slam Hardy into the turnbuckle, which is exposed somehow (I didn’t see it come off), but Hardy avoids it and tosses Sami with a back body drop. He drives Sami into the announce table with a dropkick. He goes for Poetry in Motion onto the barricade, but Sami moves and he crashes hard as we go to commercial.

When we come back, Hardy is fighting out of a side headlock. He delivers a split-legged jawbreaker, but Sami delivers a clothesline for 2. He pins Hardy again, getting the same result, and he begins to get frustrated. He locks in a rear chinlock in the middle of the ring, but Hardy fights out. He tries to go the ropes, but Sami slams him to the mat with a hair pull. He tosses Hardy to the outside, and spears him into the barricade which gets a 2 count. He goes for another pin again, getting another 2.

Sami delivers an elbow from the second rope for 2, and slams him to the mat. He goes to the top rope, but Hardy meets him there. Hardy delivers a massive superplex. The two trade blows in the middle of the ring, and Hardy gets his second wind, delivering his inverted atomic-drop leg drop combo, and then a dropkick and a splash for 2. He looks for the Twist of Fate, but Sami counters with a backslide for 2. He looks for a Blue Thunder Bomb, but Hardy rolls him up for a very close 2.

Sami delivers an exploder suplex in the corner, and then tries to whip Hardy into the exposed turnbuckle, but Hardy counters with a mule kick to the injured ribs. Sami answers with a beautiful Blue Thunder Bomb for 2. Sami looks for a superplex, but Hardy tosses him off the rope and looks for the Swanton Bomb, but Sami gets the knees up.

Sami looks for the Helluva Kick in the corner with the exposed turnbuckle, but manages to put on the brakes when Hardy moves. Hardy goes for the Twist of Fate, but Sami shoves him away. Hardy stops himself before he runs into the turnbuckle, then looks for a Whisper in the Wind, but Sami pulls him off the ropes and onto the exposed turnbuckle, which is enough to get a 3 count. The show ends with a victorious Sami Zayn holding his beloved Intercontinental Championship close to him. 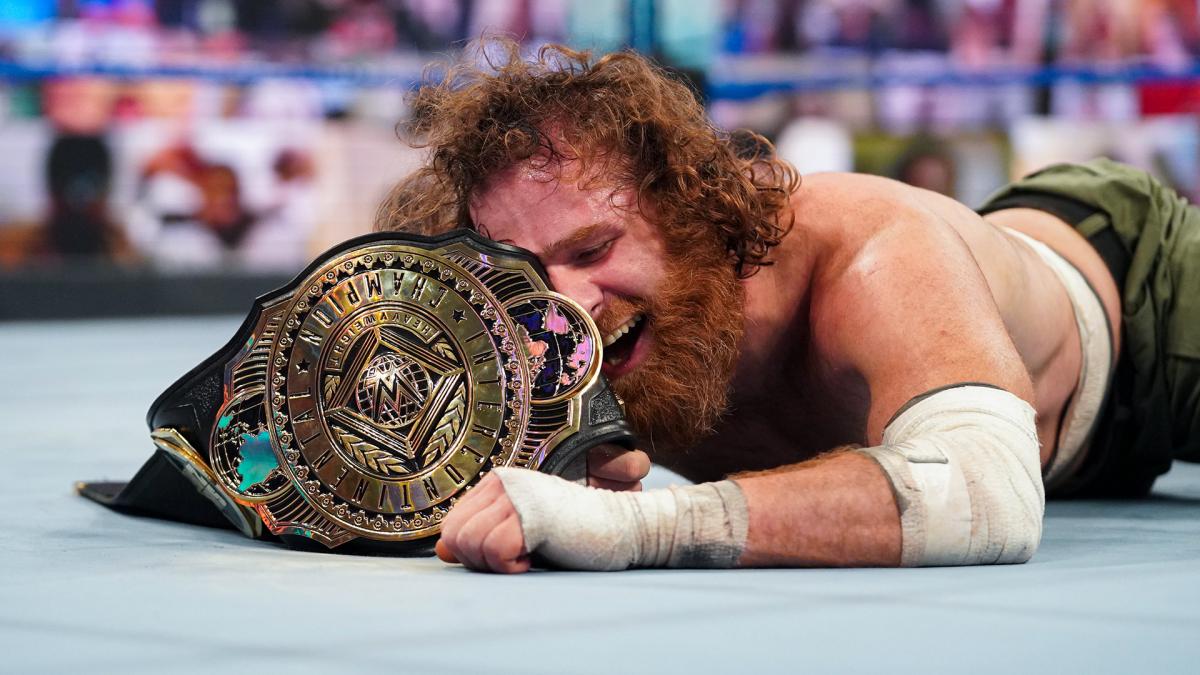 Multiple squash matches that meant nothing kinda harshed the vibe of the show, but Alexa Bliss and The Fiend are finally doing something, so I’ll let it slide.