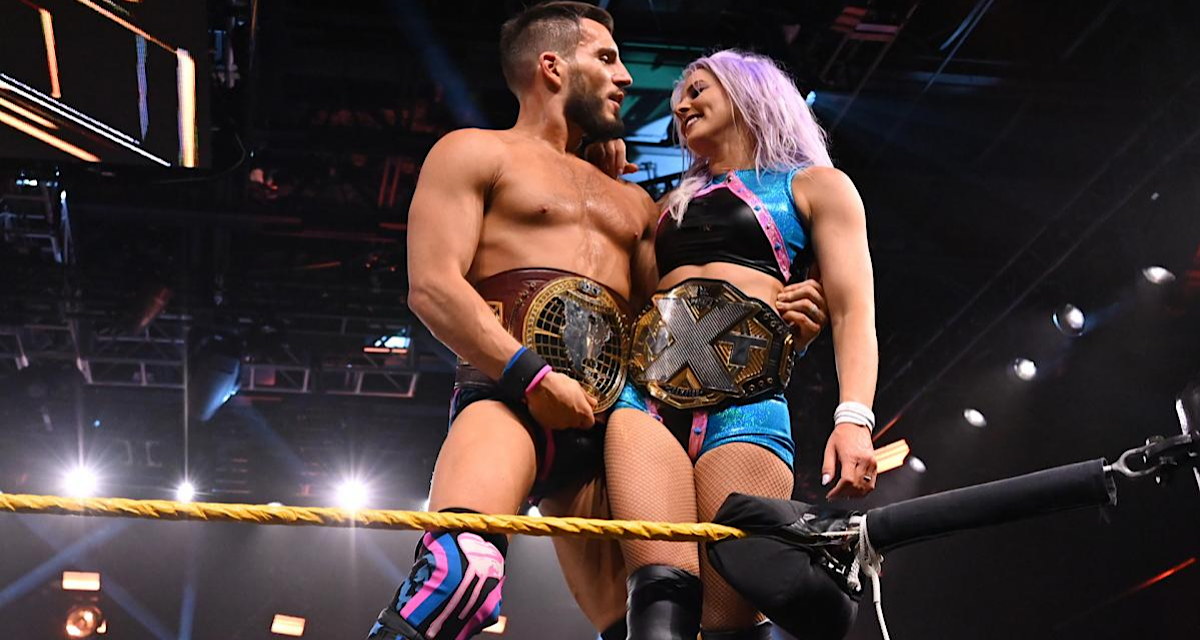 NXT has encountered multiple landscape changes throughout the past few months, whether it was temporarily switching to Tuesday or filling top vacant championships. This Sunday, October 4, wasn’t an opportune time to hotshot Takeover. Especially when the brand-new NXT Champion Finn Balor has barely been present on TV, and numerous Covid reports have taken out the roster.

Consequently, the go-home show to Takeover 31 suffered. Contrary to the thumbnail, Johnny Gargano and Candice LeRae didn’t capture the gold, but they did close out this lackluster teaser to Takeover. Surely Sunday’s outstanding wrestling matches will cover the incomplete build, but tonight is only Wednesday.

Blackheart and the women’s division continue to open each week, which is questionable considering NXT’s current struggle in the ratings war. The two competitors immediately zoom through some quick back-and-forth action until Kai gains control. Before commercial, Gonzalez provides a distraction, and Kai capitalizes. The green-haired Blackheart makes a comeback that Kai quickly foils, keeping this bout stagnant. They battle on the apron before Blackheart hits the Sliced Bread — except she takes a nasty bump, landing on her head in the process. Gonzalez interferes again, but rival Rhea Ripley takes her out; Blackheart scores the pinfall victory with a rollup. Sure, NXT has the greatest women’s division in wrestling, but every aspect of it feels meaningless.

The returning NXT alumni returning at Takeover presents another vignette. The selection has certainly dwindled since the first teaser.

Hyping Kyle O’Reilly’s championship opportunity this Sunday, a special video package gives some awesome insight about the challenger’s career. The editing team deserves an award because this instantly made O’Reilly seem like the best underdog babyface in years. It’s really beautiful stuff.

Grimes takes the mic complaining about his Gauntlet Eliminator Match loss last week. In amusing mockery, Grimes proposes the ‘The Cameron Grimes Invitational Stepping Stone to the Moon Match.’ He even brings out his hand-picked opponent, five-foot-nothing Joey Pistachio. Grimes immediately hits The Cave In double stomp for the victory. Before he calls out the next opponent, Ridge Holland throws the poor invitation acceptor across the stage. Holland gladly accepts the now-open invitation, headbutting Grimes before the bell.

Holland ferociously clubs his opponent and stomps into him through the five-count. The referee rings the bell as Full Sail erupts in cheers and applause. That was a quick turn for Holland from just last week.

Austin Theory is interviewed about his current losing streak. He brings up Kyle O’Reilly’s inspiring package, and how it mentioned O’Reilly’s 15-year wrestling journey. Of course, Theory points out that that’s more than half of his lifetime.

A video package outlines Kushida’s migration to America and NXT. He speaks in native Japanese throughout, targeting his Takeover opponent Velveteen Dream. From the bell, the ‘new Kushida’ proves very aggressive but doesn’t have the size to accompany the fire. He’d fare much better in the Cruiserweight division — both Kushida and the purple belt need it. The Japanese targets Nese’s left arm and submits him with an armlock. Afterwards, the lights turn purple, and the Dream appears on the titantron. “See you Sunday” is about the extent of it.

Cameron Grimes is backstage writhing in pain, looking for General Manager William Regal. He instead runs into the returning Dexter Lumis. The latter didn’t know where Regal was — in fact, he didn’t speak at all.

Adam Cole paces inside the ring, mic in hand. He puts over The Undisputed ERA’s dominance throughout their three-year NXT tenure and calls out Austin Theory who shaded Kyle O’Reilly beforehand. Theory accepts the challenge which brings back EVOLVE 127 memories — these two’s latest encounter from last year. Cole keeps the pressure on his opponent and pump kicks him ringside; Theory’s selling is over-the-top awesome. Theory eventually hits the incredible Rolling Dropkick before commercial and gains control. After some time, Cole makes the comeback hitting a Backstabber, Pump Kick, and Ushiguroshi for two. Theory delivers a Powerbomb, and Cole returns with two out-of-nowhere Superkicks. Cole delivers the Ushiguroshi and Last Shot for the pinfall victory.

This match was a glimpse into the WWE’s future. Cole speaks to the ringside camera saying, “Kyle O’Reilly was born ready. Nobody wants this more, nobody has earned an NXT title shot more. On Sunday at Takeover, Kyle is gonna shock the world.” Actually, the inevitable Undisputed ERA split will be doing the shocking at Takeover.

NXT Women’s Champion and North American Champion Io Shirai and Damian Priest are interviewed backstage about their upcoming mixed match with the Garganos.

Apparently like every women’s match on NXT, the action immediately breaks out at 100mph. Maybe that’s an attempt at keeping viewers engaged for filler matches. Li sends her opponent off the apron and keeps the downward pressure. She attacks with martial-art kicks, but Carter counters with a Superkick. They roll through some awkward rollups until Carter gets the victory. Li refuses a handshake and pushes Carter down.

WWE Hall of Famer Shawn Michaels conducts this pre-recorded, cinematic-style contract signing between NXT Champion Finn Balor and challenger Kyle O’Reilly. They trade their respects, and Michaels calls O’Reilly the best-kept secret in wrestling — very high praise. Balor ponders the involvement of The Undisputed ERA and tells O’Reilly that he’ll slap his freckles off. “The Prince” is looking bolder than ever, and O’Reilly is exposing his own promo weakness; albeit he held his own.

The champions don’t wait to conclude their entrances before charging the ring. They battle under Shirai’s strobe lights making for a cool visual. After retreating ringside, Gargano prances around Priest before running into a lethal-looking big boot. Priest towers over his opponent and manhandles him around the ring. The women tag in, and Shirai gets the upper hand temping Gargano to step in. Priest makes the save with a head kick and big splash. He then hoists Shirai onto his shoulders and throws her onto their opponents ringside before commercial. LeRae now has control after Shirai inadvertently hit Gargano with the Tiger Feint Kick. But Priest tags in and clobbers Gargano; Shirai adds insult to injury by Springboard Dropkicking Gargano out the ring. Gargano pulls LeRae out from a Crossface and later a Moonsault, but Priest again takes him out. Shirai hits the Moonsault on Gargano letting LeRae low blow Priest. Gargano hits the One Final Beat for the pinfall victory.

The intro sums it up. If you really wanted to watch some worthwhile NXT action from Wednesday, check out Cole vs Theory.