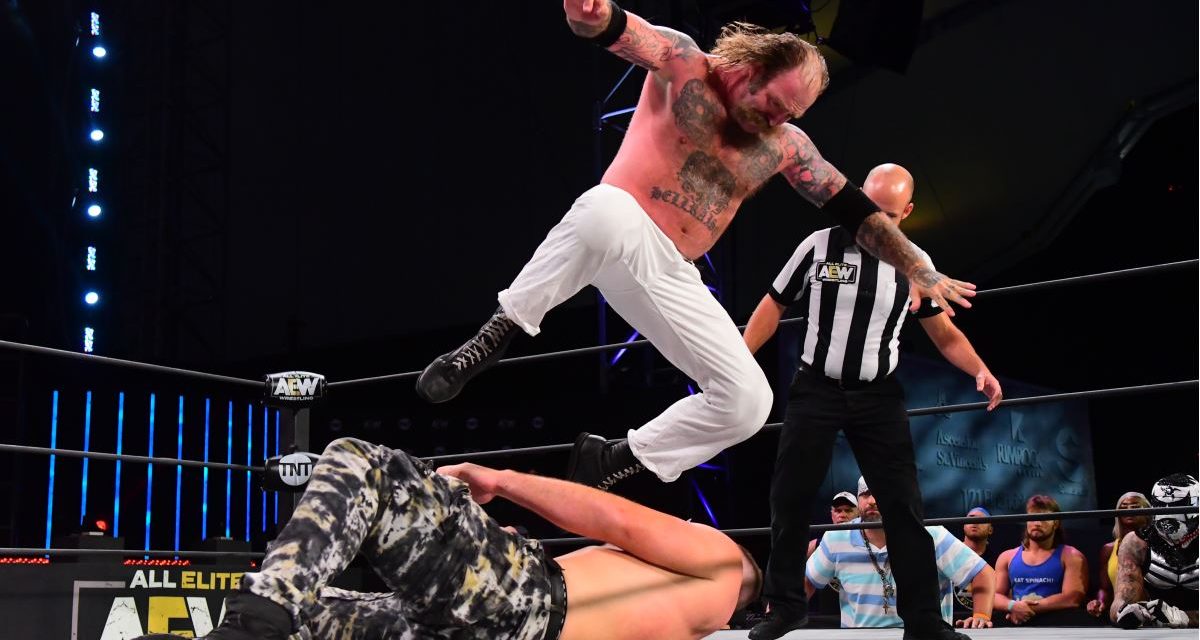 Sometimes in pro wrestling, you can settle a score with your own two fists. Other times you have to get someone else to do you dirty work, and for Eddie Kingston, tonight on AEW Dynamite is one of those times. Still feuding with AEW Champion Jon Moxley, he’ll get to pick the person to take on Mox in tonight’s main event. We’ll see who Kingston chooses and how they fare in less than two short hours, as we go live to Daily’s Place on TNT.

Hey, I went to a wrestling match and a fight broke out! In this case, said fight is between Starks’ teammate Brian Cage and Will Hobbs, though they quickly take their fisticuffs to the back. Non-neutral observer Taz is with the announcers to hear Excalibur praise Allin for his explosivity, which is indeed a real word. Starks experiences it firsthand in the form of a Coffin Drop that  keeps him down for three. Taz: “I’m very upset this happened.” That’s kind of how I felt watching something on TV last night, Taz.

Since we haven’t heard from Cody in a while, there’s some intrigue to hearing him speak tonight. He talks about how his recent injury was as much mental as physical and waxes philosophical about how only three people can claim to be the ace of AEW: Hikaru Shida, Jon Moxley, and Mr. Brodie Lee. Asked if he will accept Lee’s challenge for a Dog Collar Match, he first says “no,” but it turns out to just be a tease. Cody emphatically accepts, and Lee answers by storming the ring and starting a wild pull-apart brawl. Amid the chaos, Brandi Rhodes somersaults off the top turnbuckle onto a bunch of Dark Order goons on the floor, Anna Jay grabs her, and Nyla Rose starts a totally unrelated fight out beyond the barricade. It’s taking a gaggle of referees and officials and a nice chunk of the roster to restore order. Jim Ross notes that in 40+ years in the business, he may have only called four or five Dog Collar Matches, reinforcing the idea that they just don’t happen that often.

Tony Schiavone tracks down FTR, who wants to talk about Best Friends even though their title defense tonight is against SCU. They also dismiss the idea of the Young Bucks deserving a shot, with Matt Jackson responding by superkicking Schiavone. Guess Taz will be sticking around all night.

SCU gets a backstage interview and heads to the ring, only to find Shawn Spears creeping right behind the curtain to wish them an equally creepy “good luck.”

FTR has played up the idea of a 20-minute time limit so much that it would be mildly surprising if that didn’t come into play here. Hangman Adam Page is on guest commentary even though he isn’t really a tag team wrestler at this point. He does say he hopes he isn’t done with the tag team division yet, and notes that Kenny Omega has yet to have a singles match despite declaring that as his primary focus. As the near falls pile up, the time limit looms, but Tully Blanchard lends a hand from the floor to help his clients steal a victory.

Breaking news: There’s going to be an eight-man tournament with the winner receiving a shot at Moxley’s title at Full Gear. The first three competitors are Jungle Boy, Rey Fenix and Kenny Omega, news that immediately chases the smile from Page’s face as he leaves the announce table.

There are several ways this could go, but even though Jericho has not shown he is above putting over some of AEW’s younger talent, that tends to happen at pay-per-views, not on Dynamite. But you know what? That’s OK, because no promotion right now is doing “up and comer pushes formidable veteran to the limit” quite as well as AEW. The fact that Kassidy is a tag team specialist getting some solo shine is just icing on the cake. The Judas Effect remains sacred, however, and Kassidy takes a valiant loss. Jericho and Jake Hager get into it with Luther and Serpentico on their way out. 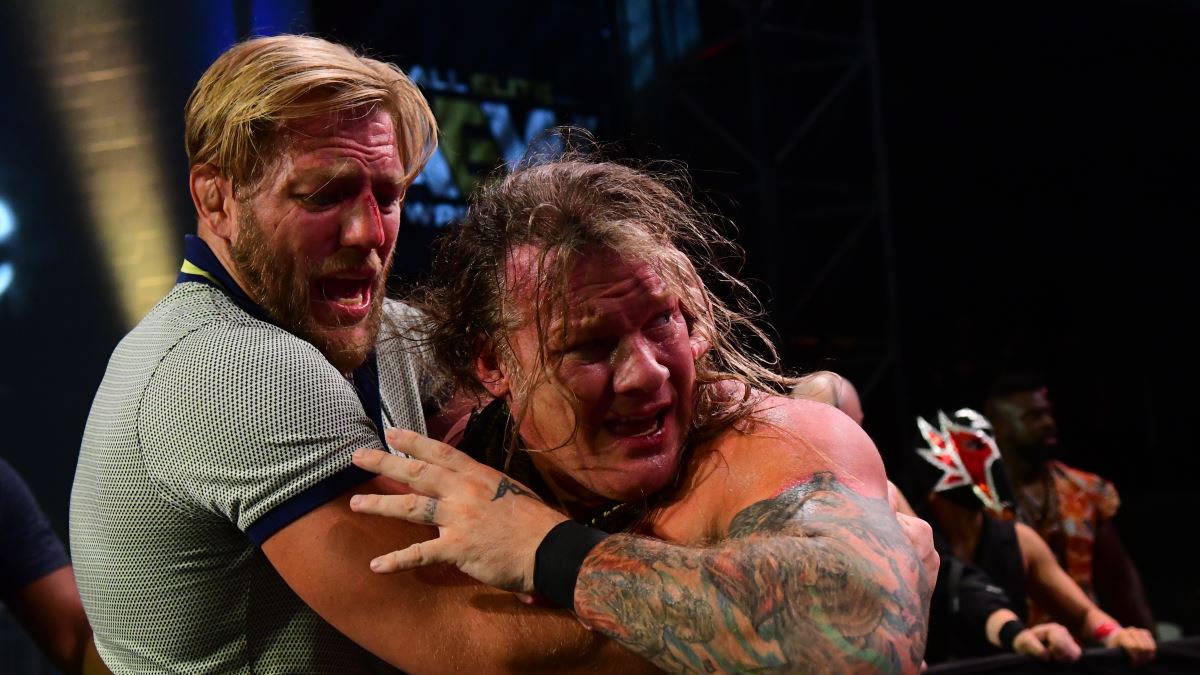 Because of the restrictions caused by the pandemic, Miro is having a hard time planning a bachelor party befitting his buddy Kip Sabian. He specifically wants it to be as crazy as Amish people going through Rumspringa, and he gets an offer of assistance from video game ace, restaurateur and thumbs up aficionado Billy Mitchell.

Backstage, Best Friends and Orange Cassidy are about to be interviewed when FTR come by to be condescending. Chuck and Trent make them flinch, though, and Cassidy calls them weenies. That’s telling them.

Most of the Dark Order is helping to calm down Lee, but Colt Cabana and John Silver are out there in 10’s corner. In the end, though, this is something of a squash for Freshly Squeezed.

MJF and Wardlow enter the Inner Circle locker room, and they’re bearing gifts. Everyone gets a jacket but Sammy Guevara, which might be an oversight but could just as easily be intentional. Amusingly, it turns into a repeat of one of the most famous AEW promos to date, with Jericho asking if MJF wants to join the Inner Circle and MJF asking in return if Chris wants him to join. They again settle nothing, but after MJF leaves, Guevara is halted as he’s about to call Max a loser, with Jericho saying “perhaps he’s not.”

J.R. beats me to the obvious joke, calling Red Velvet “my favorite cake.” Another thing he says that is definitely true is that a healthy Baker strengthens the women’s division a lot. If this was to get her back in cardio shape, mission accomplished, and she adds injury to insult by putting Red Velvet in the Lockjaw after the bell.

The time has come for Kingston to pick Moxley’s challenger, and his selection is … The Butcher. Which would make sense if he was a supervillain, but alas.

There are a bunch of reasons the “pick a challenger” thing is kind of lame, but mostly it’s because there’s about to be an eight-man tournament to get a similar opportunity when Butcher just gets to skip all that. It makes even less sense here because Kingston needed to scrap his way through the indies for years and now his henchman steps to the plate seven days later. Eh, maybe I’m overthinking it. In any case, Butcher gives a fine account of himself, but in the end, he gets tapped out. And all we get for payoff is Kingston gritting his teeth as the show is over. Roll the opening credits of the movie that’s up next on TNT, and we’ll see you in seven!

This show was fine if unspectacular. It was nice for Isiah Kassidy and The Butcher to get some time to shine, but Cassidy should be beyond squash matches, and even the title bouts were nothing special. Dynamite has a tendency to coast on occasion in-between loaded shows, and next week could be one of those with a focus on Jericho’s career and the Dog Collar Match. That should be fun.