SmackDown: The Friday before the Clash 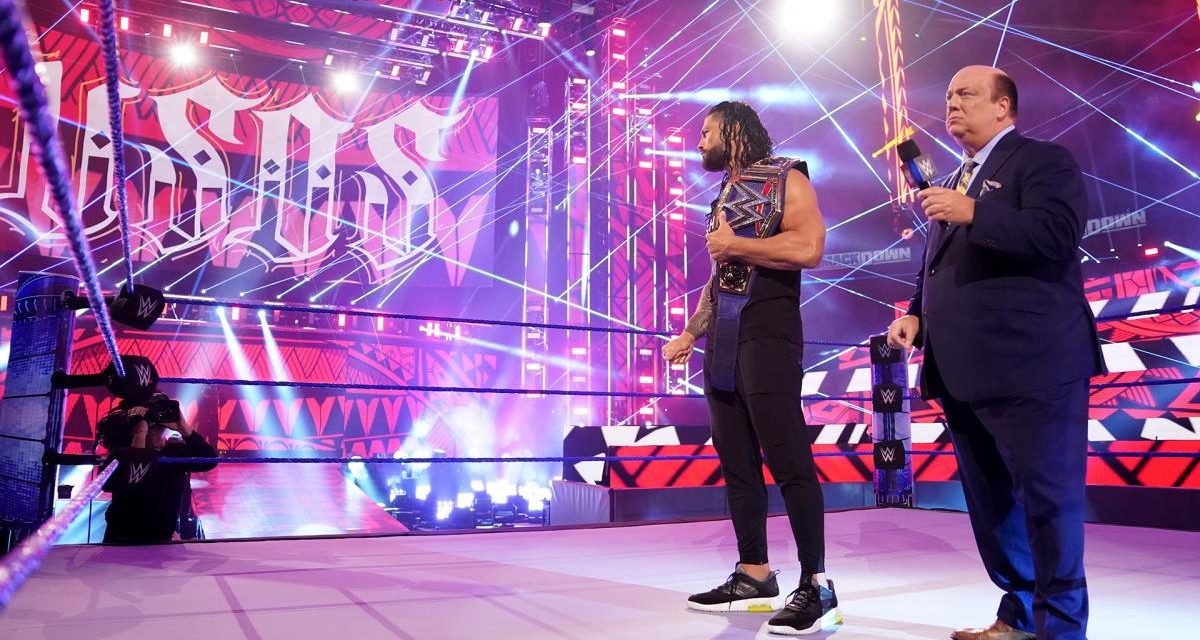 Featuring an Ascension Ceremony and a confrontation between Roman Reigns and Jey Uso, this September 25th edition of SmackDown is the last one before Clash of Champions.

We start off the show with Sami Zayn, AJ Styles, and Jeff Hardy at the Intercontinental Championship Ascension Ceremony, where they hang both titles in preparation for the ladder match. AJ, and later Graves and Michael Cole, keep going on about how Sami did nothing while he was gone, and I get even more mad (see my rant from last week). After they hang their titles above the ring, Sami takes a cheap shot on AJ and Hardy, which makes me feel a little better. However, apparently hitting people isn’t allowed on a wrestling show anymore, as Adam Pearce comes out and punishes Sami with a match against Hardy and Styles next. 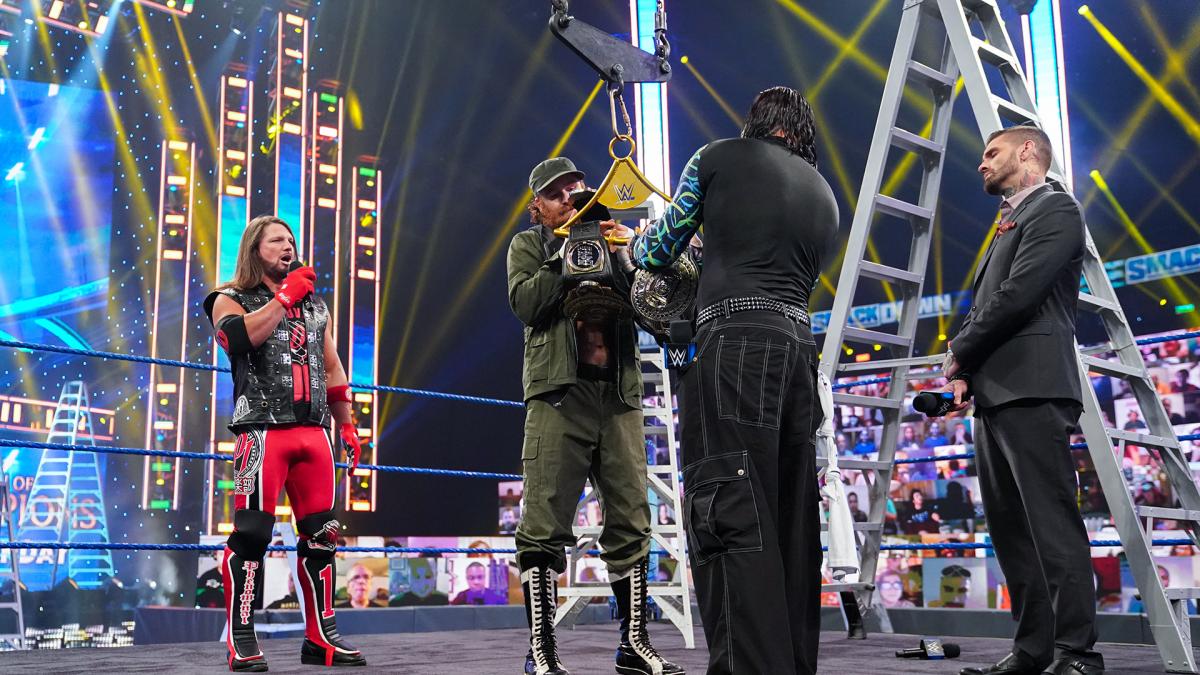 Hardy gets the upper hand early, hitting AJ with an atomic drop and slamming Sami into the turnbuckles. He delivers his inverted atomic drop-leg drop combo, but AJ hits him from behind before he can pin Sami. The Phenomenal One focuses on the leg of Hardy, and tosses him out of the ring and slams him against the announce table. Sami attacks Styles, bringing him back in the ring and dropping him with a clothesline for 1. It just hit me how much Sami Zayn looks like Buddy Murphy’s older, unemployed brother.

Sami blasts Hardy off the apron, and then looks for a suplex, but AJ spears Sami into the corner. AJ locks in a submission, and then uses Sami as a battering ram to knock Hardy off the apron once more. AJ locks the submission back in, and attempts to use Sami as a battering ram again, but Hardy moves out of the way and then finally enters the ring to attack Styles.

He delivers a short arm clothesline, and takes out Sami as well. Hardy hits both opponents with a dropkick, and then Sami with an Irish Whip-backdrop combo. He jumps off Sami to deliver Poetry in Motion to AJ in the corner, and then climbs the ropes, looking for the Swanton Bomb. Sami dumps him off the ropes, and he follows the Charismatic Enigma out, but AJ leaps out and takes him out with the Phenomenal Forearm as we go to commercial.

When we come back, Sami is looking for a superplex on AJ, but he slides under him and pulls Sami onto the turnbuckle. He looks to attack Hardy in the corner, but Hardy kicks him, and then Sami, and then hits them both with Whisper in the Wind. They all get to their feet and knock each other around. Sami hits both opponents with a Helluva Kick, but AJ answers with a Pelé Kick. Styles looks for the Phenomenal Forearm on Sami, but he ducks and AJ hits Hardy instead. Sami dumps AJ out of the ring and pins the prone Hardy for the win.

After the match, AJ hits both other men with a ladder. AJ brings another ladder into the ring and climbs it, grabbing both titles, because I guess he didn’t get the point of the Ascension Ceremony. Why did they have this match? It’s exactly the match at Clash of Champions but without the ladder stipulation. There’s just no patience around here is there?

Backstage, The Miz and Morrison confront Otis, trying to annoy him into attacking them. The observant Tucker notices that only The Miz’s name is on the lawsuit given to Otis, meaning that Otis can attack John Morrison. He does this with glee, leaving the Shaman of Sexy in pain on the concrete floor.

Bayley comes out and mocks Sasha Banks some more. Joke’s on her, I don’t see Bayley in Season 2 of The Mandalorian. Bayley says she has no more time to waste on Banks, moving on to Nikki Cross. She says that Cross is wrong in her statement about this match being different because Sasha isn’t around. Her reason being, if she did those terrible things to someone she once considered a friend, imagine what she’ll do to Cross.

Nakamura comes out of the gate with some hard knees, but the King of the Ropes uses his speed to arm drag Nakamura out of the ring. Metalik looks for a baseball slide dropkick, but Namakura catches him with a kick to the head. He tosses him into the barricade and then onto the apron. He hits a raised knee strike on Nakamura and then pins him for 2.

Nakamura looks for his exploder suplex, but Metalik fights out of it and hurricanranas Nakamura to the apron. He hits an enziguri and then dives outside with a massive Swanton to take out Nakamura. Metalik delivers another Swanton, in the ring this time, for 2. He looks for a moonsault, but Nakamura moves. He delivers a running knee, an exploder suplex, and the Kinshasa for the win. 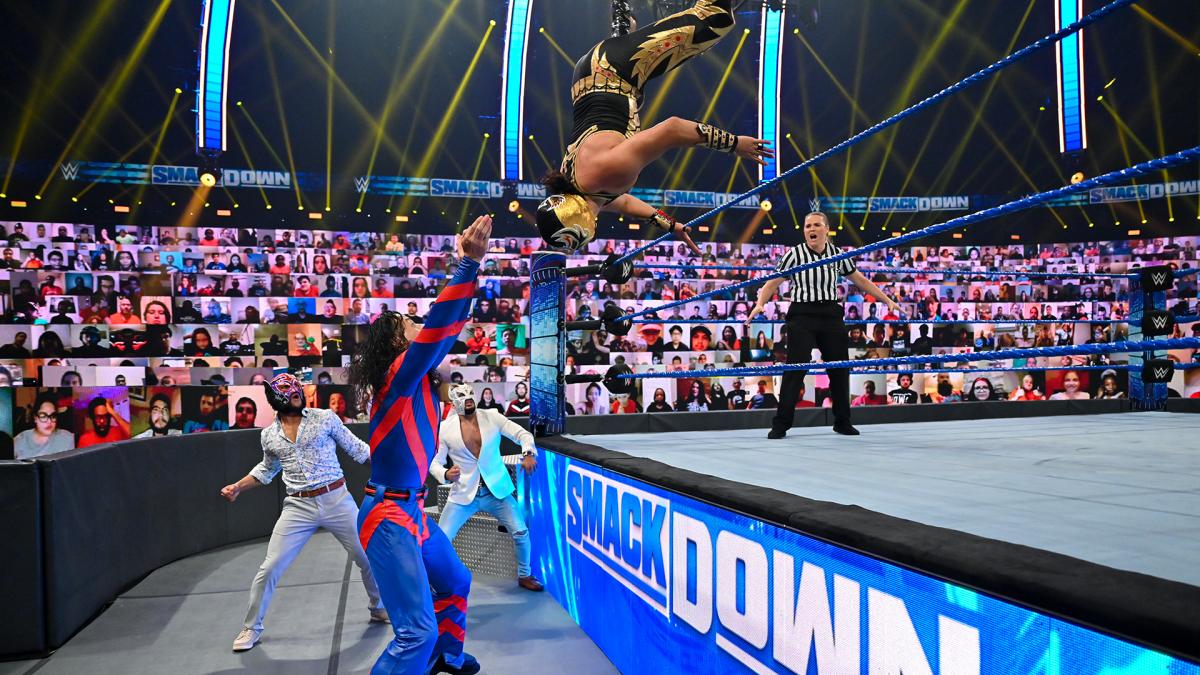 After the match, Cesaro attacks Lince Dorado, who had come in to check on Metalik. Kalisto conveniently doesn’t enter the ring until Cesaro and Nakamura leave, which angers Dorado, who shoves him. These guys gotta get it together.

We get a promo covering the “feud,” if you can even call it that, between Jey Uso and Roman Reigns. Jey comes out and delivers a promo with Roman watching from backstage. Jey shows the ending from the Samoan Street Fight, when Roman stared down Jey. Jey asks Roman why he looked at him that way, and he gets no answer. Heyman says that Roman will give an answer later tonight, in person.

Riddle starts off hot, driving the King outside the ring with kicks. Corbin goes back in and catches Riddle when he comes back in. Riddle looks for a Kimura Lock, but Corbin counters with a slam. He beats Riddle down in the corner, and drops Riddle with an elbow for 2. Corbin tosses Riddle into the corner and looks for a clothesline, but Riddle ducks. Corbin does his spin around the ringpost clothesline, but Riddle catches him with a Pelé kick. He tosses Corbin over the announce table as we go to commercial.

When we come back, Corbin is fighting out of a triangle hold with a powerbomb for 2. Corbin gets frustrated and chokes Riddle on the ropes, and drops him with a big right hand. He delivers another right, but when he goes for another, Riddle collapses. Corbin looks for the End of Days, but Riddle hits him with the Final Flash, and then an exploder, a Bro-Ton, and a PK for 2. The Original Bro locks in a sleeper hold, but the King gets to the ropes. Riddle looks for the Final Flash again, but Corbin reverses it into a Deep 6 for a close 2. 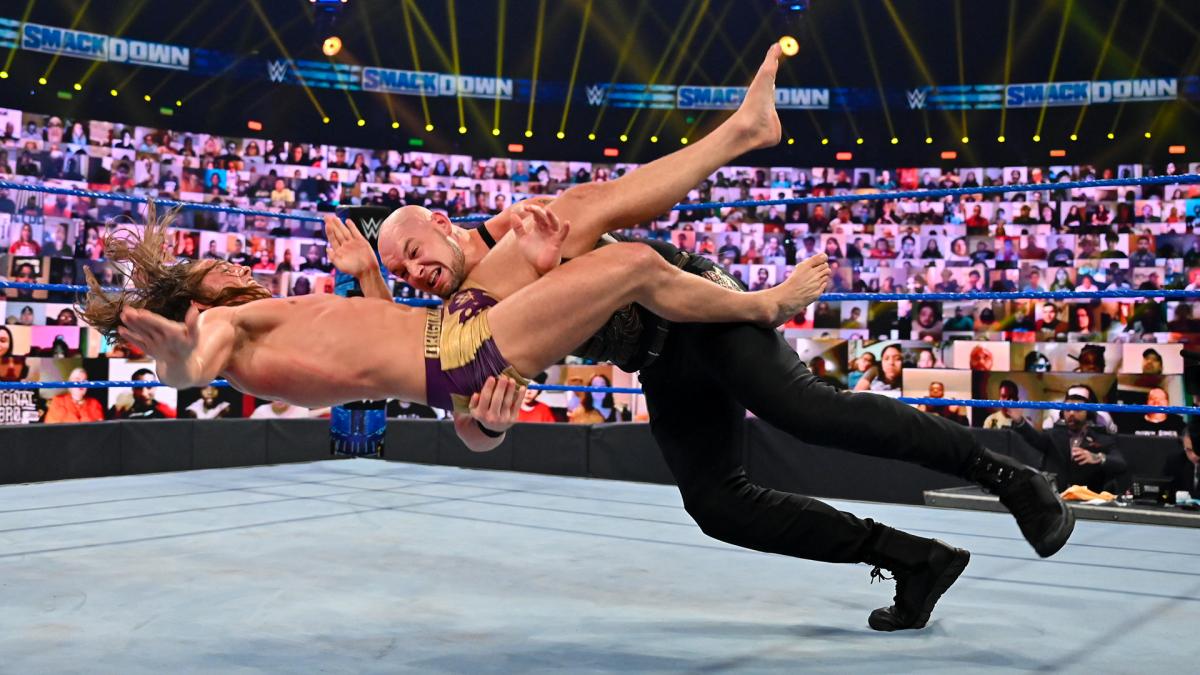 Riddle fights out of an End of Days attempt, but gets caught with another big right from the King. Riddle reverses another End of Days attempt into a Final Flash and looks for the Floating Bro, but Corbin gets the knees up. Corbin finally delivers the End of Days and picks up the win.

Evans uses her power advantage early, but Bliss uses her speed to roll up Evans for 2 a few times. Evans tosses Bliss into the corner and does her whole handkerchief bit. She delivers her modified Bronco Buster for 2. She locks in a submission hold, and whips Bliss into the mat when she tries to get out. Bliss tries to fight back, but Evans slams her on the mat for 2.

Bliss reverses Evans attempts to slam her into the turnbuckle with an STO. We begin to hear the laugh of The Fiend as we go to commercial. Now, how do I say this lightly… WHY WOULD THEY GO TO COMMERCIAL NOW?

When we come back, Evans is delivering a standing moonsault for 2. She slams her head on the mat and rubs her arm on her face. She locks in a submission, and Bliss fights out, tossing Evans into the corner. Evans grabs Bliss and rakes the eyes of Bliss on the ropes, and then delivers a leg sweep-dropkick combo that sends Bliss to the outside. Bliss rolls back in and is covered for 2.

Evans gets frustrated and attempts to pin her twice more with the same result. Bliss gets her second wind, delivering a couple clotheslines and a dropkick. Evans takes her out again and looks for her moonsault, but Bliss moves.

The Fiend’s high pitched whining sound echoes throughout the arena, and Bliss’ demeanor changes immediately, brutally attacking Evans with a crazed look in her eye. The ref is forced to stop the match, but Bliss doesn’t stop there, delivering Sister Abigail on the outside. The crazy, angry look is so much better than the vacant look for Bliss, I’m super excited to see where this storyline is going. 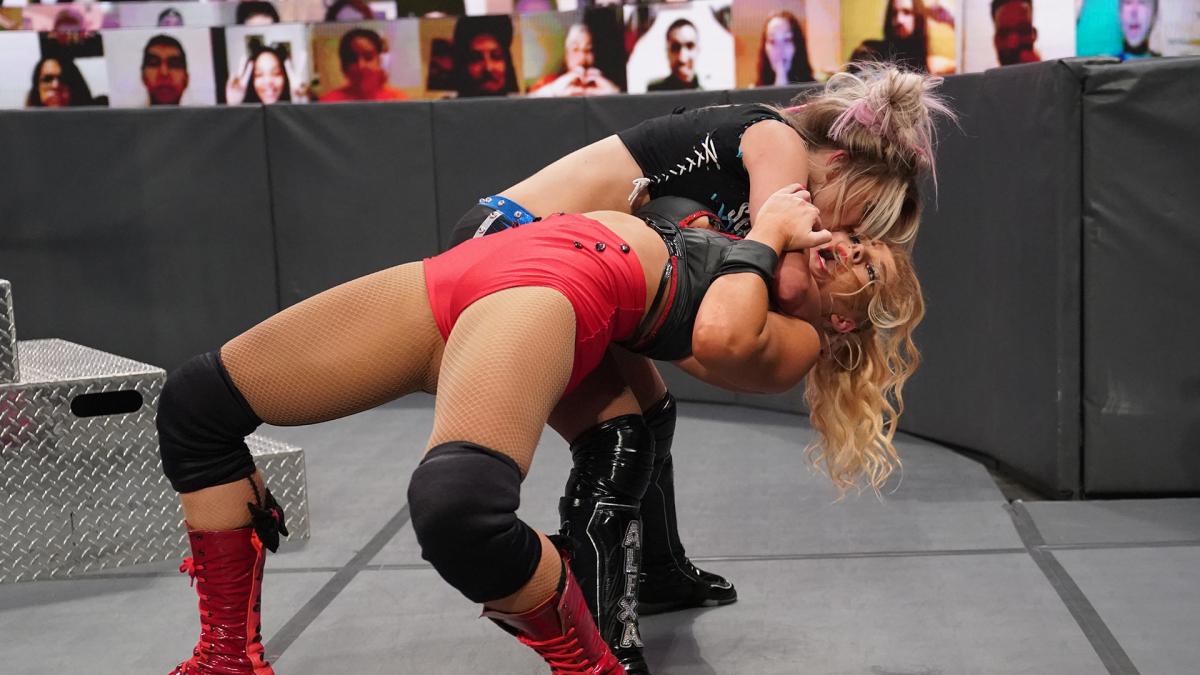 A crazed Alexa Bliss sets up for a Sister Abigail on Lacey Evans.

The Universal Champion Roman Reigns comes out, and before Paul Heyman can even say anything, Jey comes out. Roman says he would give Jey the Universal Title if he could, but apparently Jey doesn’t understand the responsibility of being champ. He says that Jey will never be the most important man in the family, because it will always be him.

Roman begins to leave, but Jey stops him. Jey gets fired up, talking about how he’s felt overshadowed by Roman, saying that whenever someone sees him all they say is “which one are you.” But after Clash of Champions, people will know who he is. Jey begins to leave, but gets hit with a Superman Punch from Reigns. The show ends with Roman holding his title over a prone Jey.